We are reporting a case of a 55-year-old woman who was diagnosed as having a non-functioning pancreatic neuroendocrine neoplasm (NF-PNEN), the World Health Organization (WHO) low grade (G1) with liver metastases. In the staging process the positron emission tomography — computed tomography with Fluorine-18-Fluorodeoxyglucose (F-FDG PET-CT) and spiral CT then the gallium-DOTA-octreotate positron emission tomography — computer tomography (68Ga-DOTATATE PET-CT) shown difference in burden of disease. In first line therapy, everolimus (Afinitor®, Novartis Pharma GmbH, Germany) at the oral dose of 10 mg once daily and octreotide long-acting release (Sandostatin LAR®) 30 mg i.m. every 4 weeks were administered. Then, due to disease progression — radioisotope therapy with β-emitter Yttrium-90 (90Y). Based on this experience and on the review of the literature, we recommend that the discrepancy between the imaging studies could be due to heterogeneity of proliferation rate and somatostatin receptors (SSTR) expression within a primary PNEN and metastases. Therefore in such cases of advanced PNEN WHO G1 in the lack of response to everolimus and octreotide LAR administration isotope therapy without a prior chemotherapy should be considered as a palliative treatment according to ESMO Clinical Practice Guidelines and Polish Network of Neuroendocrine Tumors.

Pancreatic neuroendocrine neoplasms (PNENs WHO 1) are rare malignant diseases [1]. Due to frequently asymptomatic growth, the majority of PNENs are diagnosed at locally advanced or metastatic stage [2]. The role of surgery is therefore often palliative, whereas chemotherapy has limited activity [3–5]. Recent studies (RADIANT-2 and RADIANT-3) showed efficacy of everolimus with or without concurrent somatostatin analogue in low- or intermediate grade advanced PNENs and, therefore, it is recommended in first line therapy [6–8]. Everolimus, a 40–0-(2-hydroxyethyl) derivative of sirolimus, is an oral inhibitor of mammalian target of rapamycin (mTOR), a serine-threonine kinase that stimulates the cell growth, proliferation and angiogenesis [9]. So far, it has been used for the treatment advanced renal cell carcinoma after failure of treatment with sunitinib or sorafenib and in combination with steroidal aromatase inhibitor in hormone-receptor positive, human epidermal growth factor receptor type 2 (HER2) negative breast cancer, after failure of letrozole or anastrozole therapy [10, 11]. The gallium-DOTA-octreotate positron emission tomography — computer tomography (68Ga-DOTATATE PET) allows visualization of somatostatin receptors type 2 (SSRT2), typically expressed in intermediate and well differentiated primary and metastatic PNENs [12–15], while the Positron Emission Computed Tomography PET-CT with 18F-fluorodeoxyglucose (F-FDG PET-CT) allows detecting sites of involvement of poorly differentiated PNENs.

A 55-year-old woman was admitted to the hospital in April 2012 with the head of pancreas tumor seen in triphasic computer tomography (CT) and ultrasonography (USG). At laparotomy the tumor was assessed as inoperable; therefore, only duodenocholecystotomy and a tumor biopsy were performed. Pathological report showed World Health Organization grade 1 neuroendocrine tumor (PNEN WHO G1), neuron specific enolase negative, chromogranin weakly positive, synaptophysin strongly positive, Ki67 < 1% cells. The F-FDG PET-CT performed on June 19, 2012 showed an active metabolic tumor in the head of pancreas with no metastatic lesions (Figure 1).

Since F-FDG uptake by well-differentiated PN-ENs is uncommon, two days later an additional 68Ga-DOTATATE PET was performed. This examination confirmed the presence of the pancreatic tumor (56 × 48 mm), with SSTR expression (SUVmax 35.4), but additionally revealed numerous liver metastases (15 to 20 mm; Figure 2). 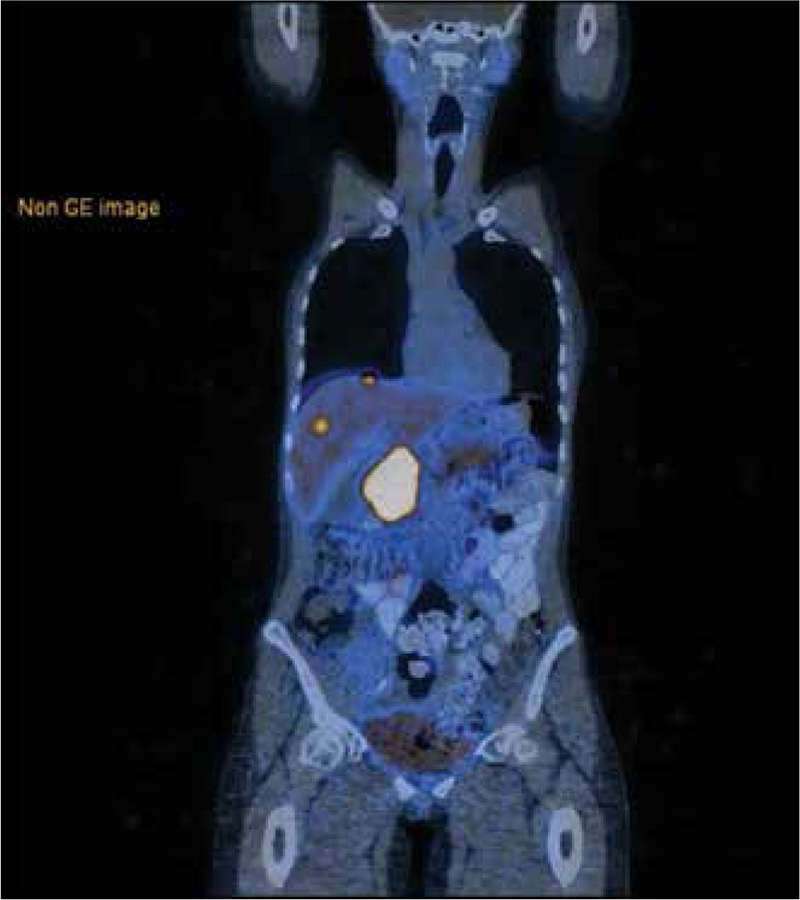 In previous CT, 5 to 7 mm lesions in the liver were noted but were not identified as metastases (Figure 3). 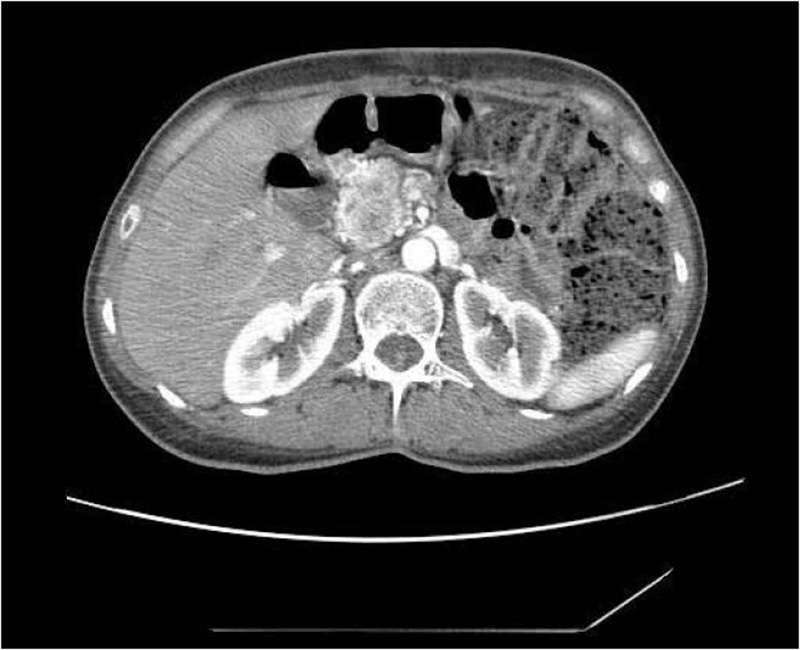 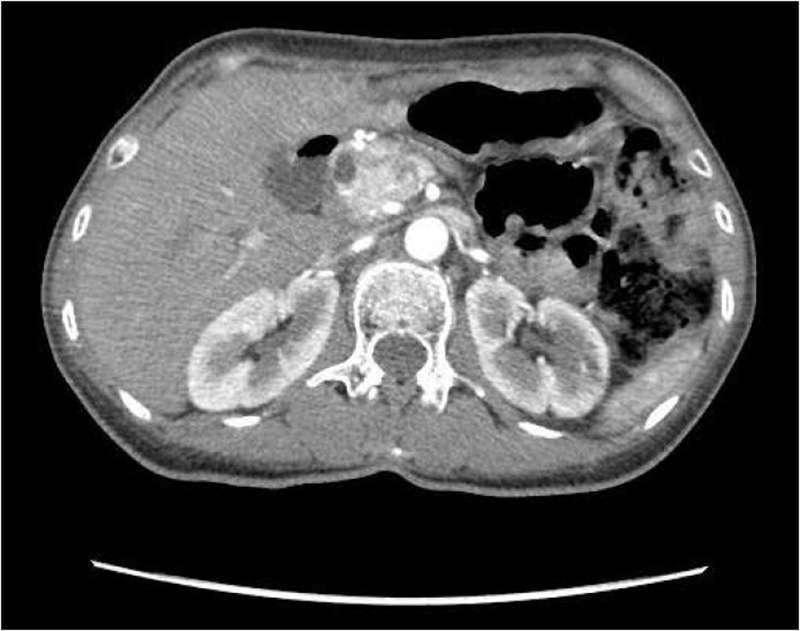 During 6-month therapy, stable disease (SD) was maintained. Major treatment-adverse events included hyperglycemia, neutropenia and elevation of liver enzyme levels. In Dec 2012 the everolimus dose was decreased to 5 mg and on March 8, 2013 therapy was stopped after grade 3 common terminology criteria for adverse events (CTCAE) v.3.0 toxicity, including increased levels of alanine aminotransferase (ALT) and aspartate transaminase (AST). The levels of alanine phosphatase and lactate dehydrogenase were slightly elevated (grade 1–2 CTCAE), and bilirubin level was within normal range. The hepatitis virus (B, C) or cytomegalovirus infection were excluded. The abdominal CT and USG showed no evidence of progression. On March 26, 2013 endoscopic retrograde cholangiopancreatography (ERCP) with sphincterotomy and Wallflex° bile duct stent insertion was performed. Since ALT and AST levels decreased and CT scans did not show disease progression, the reinstitution of everolimus at a dose of 5 of mg daily was considered. Before restarting therapy, on April, 2013 second PET-CT using 68Ga-DOTATATE was done and revealed progression of the liver metastases: more intensive uptake in the existing and new lesions (Figure 5). 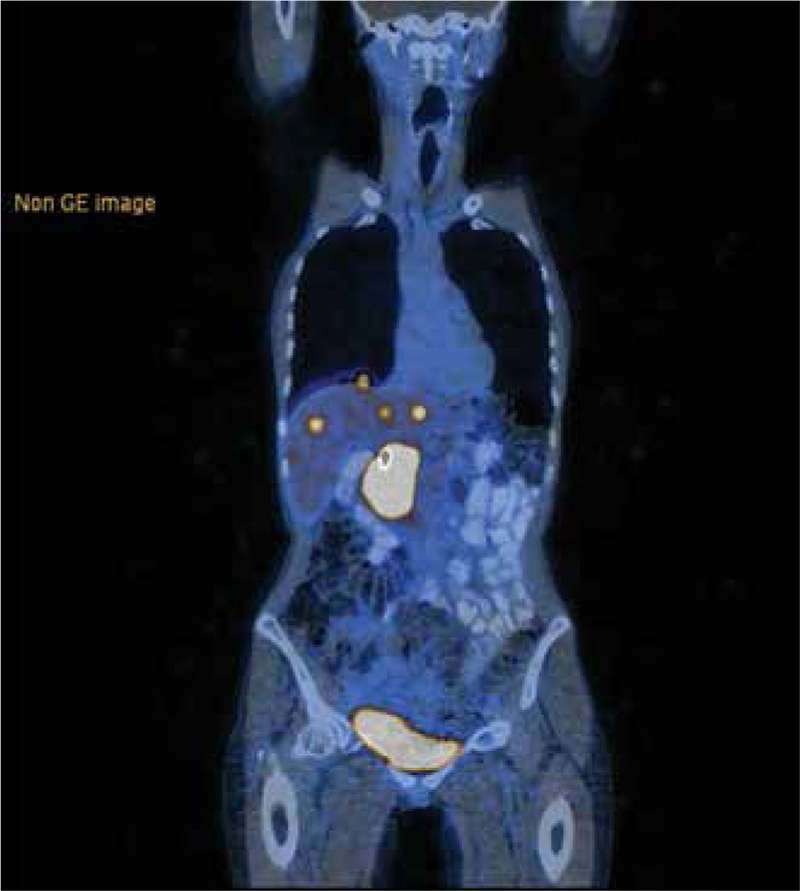 The everolimus treatment did not restart and the patient was referred to radioisotope therapy. Between June 2013 and March 2014 she received four b-emitter Yttrium-90 (90Y) courses with octreotide long-acting release continuation and disease stabilization was achieved over eleven months. She died on February 2015 due to disease progression of the liver metastases with high pCgA concentration.

The classification and nomenclature of the neuroendocrine gastroenteropancreatic neoplasms (GEP NENs) is complex [4, 5]. After several modifications, the new WHO classification presented in 2010 separating well-differentiated PNENs into low-grade (G1) and intermediate grade (G2) categories and all poorly differentiated as neuroendocrine carcinoma (PNEC G3) [16]. This classification is based on histologic grading system using either mitotic counting or Ki67 labeling index. Nearly one-half of GEP NENs have a high heterogeneity of proliferation rate within a tumor (or among different sites of disease if metastases are present) [17]. Therefore, in order to better predict patient outcome, at least 40 high power fields should be counted for mitoses and/or Ki67 labeling index [17, 18]. Moreover, GEP NETs characterized by heterogeneity in the SSTR expression [19, 20]. The SSTR2 is most common in PNENs and therefore is used in the diagnosis and treatment [4, 5]. For obvious reasons, the proper diagnosis is more difficult if is based on material from core needle biopsy.

The use of everolimus vs. best supportive care in advanced PNENs (low- or intermediate grade) resulted in impressive increase of median progression free survival (11.4 vs 5.4 months, respectively); even though in most patients only disease stabilization or minor tumor shrinkage was achieved [8]. In that study, the treatment response was assessed by triphasic CT or magnetic resonance imaging every 12 weeks according RECIST 1.0 criteria, and all discrepancies between local and central assessments were verified by independent central adjudication board. However, recent data suggest that the RECIST criteria based on measurement of the longest diameter of all measurable lesions seen on axial CT may be suboptimal in assessing the therapy response in PNENs [21]. Similarly, F-FDG PET-CT may be ineffective for PNENs imaging, as typically only poorly differentiated, highly malignant PNENs show an increased FDG uptake [22]. Interestingly, in our case F-FDG PET showed an uptake in the pancreatic tumor despite its low grade, whilst metastatic lesions in the liver were not visible. It may be due to the above-mentioned SSRT2 expression and proliferation heterogeneity within a tumor or among metastases sites.

68Ga-DOTATATE PET allows visualization of SSTR2, typically expressed in the intermediate and well differentiated primary and metastatic PNENs [12–15]. This method seems to be more sensitive than F-FDG PET-CT and magnetic resonance imaging in the initial staging of PNENs, response evaluation and follow-up [23, 24]. In our case, 68Ga-DOTATATE PET allowed early detection of tumor progression in the liver.

The discrepancy between 68Ga-DOTATATE PET, F-FDG PET-CT and CT imaging suggests the heterogeneity of proliferation and SSRT2 expression in PNENs. It seems that in such a case — advanced PNEN G1 in the lack of response to everolimus and octreotide LAR administration, isotope therapy without a prior chemotherapy should be considered as a palliative treatment according to ESMO Clinical Practice Guidelines and Polish Network of Neuroendocrine Tumors [4, 5]. The role of 68Ga-DOTATATE PET in response assessment during PNENs treatment including everolimus therapy needs to be further determined. Further, so far there is no data regarding the relationship between SSTR2 expression and response to everolimus therapy.

Written informed consent was obtained from the patient for publication of this Case report and any accompanying images. A copy of the written consent is available for review by the Editor-in-Chief of this journal.

RD, BS, BH, GK, CS: have made substantial contributions to conception and design, have been involved in drafting the manuscript, have given final approval of the version to be published

MB, GŁ, GK: prepared and reviewed/described figures to the case report, revising article critically for important intellectual content, have given final approval of the version to be published

The authors indicated no potential conflicts of interest.