Lymphatic mapping and sentinel node biopsy in a patient with upper limb Merkel Cell Carcinoma: a case report and brief review of literature

Sentinel node mapping is an integral part of regional lymph node staging in many solid tumors and plays an important role in surgical oncology. This technique has been used with excellent results for non-melanoma skin cancers including Merkel Cell Carcinoma (MCC). In the current study, we reported our first MCC patient who underwent successful sentinel node mapping. We also reviewed the available literature regarding the prognostic significance of sentinel node mapping in cN0 MCC patients.

Merkel Cell Carcinoma (MCC) is a rare aggressive neuroendocrine skin tumor with high rate of recurrence and distant metastasis [1]. Pathological status of regional lymph nodes is one of the most important prognostic factors in MCC. Patients with clinically involved regional nodes have far worse prognosis compared with cN0 patients [2, 3].

However there is a group of cN0 patients with occult lymph node metastasis which also have poor prognosis and outcome. Sentinel node mapping is an important technique for regional lymph node staging in many solid tumors which has also been used for MCC [4].

The patient underwent excisional biopsy of the lesions. Hematoxylin and Eosin and cytokeratin 20 staining lead to the diagnosis of MCC.

The patient was referred to the nuclear medicine department for sentinel node biopsy the morning of the surgery. The patient received two injections of 0.5 mCi/0.2 mL 99mTc-phytate subcutaneously around the scar of the tumor biopsy, 30 minutes before surgery. Ten minutes post-injection, lymphoscintigraphy images of the patient was performed (ANT-POST views, 5 minutes/view, using 99mTc photopeak and a dual head variable angle gamma camera (E.CAM Siemens) equipped with high resolution low energy collimator). Hue of the patient (scatterogram) was imaged simultaneously by the technique of Momennezhad et al. [5]. Scatterogram is imaging of the scatter photons of the Tc-99m simultaneous with the original lymphoscintigraphy images. In this technique, no additional time or radiation is needed and a hue of the patient can be imaged. As scatterogram can be done without any additional time, radiation and cost; it can be recommended with all planar lymphoscintigraphy imaging. 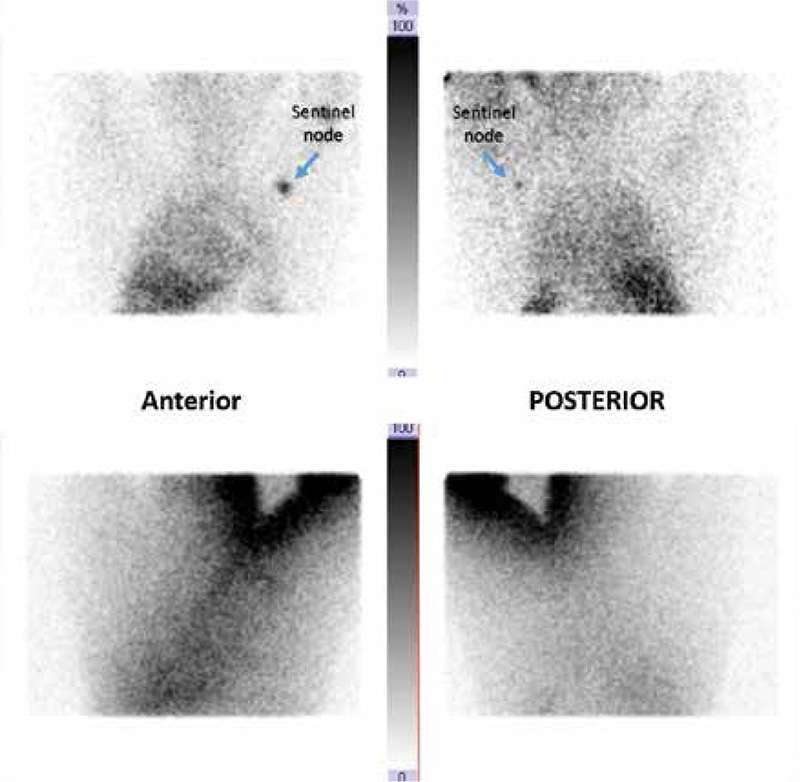 Figure 1. Lymphoscintigraphy images of the patient. The lower row images are scatterograms of the corresponding upper row lymphoscintigrams. A sentinel node could be identified in the left axilla. Injection site is out of the field of imaging

The patient underwent local radiotherapy for the primary site of the tumor. At 7 months follow up the patient didn’t have any evidence of local or regional recurrence.

Sentinel node mapping is the standard method of regional lymph node staging in breast cancer and melanoma [6, 7]. Its application in other solid tumors such as gynecological and urological cancers is growing with very promising results [8, 9].

Lymphatic mapping and sentinel node biopsy has also become very common in the high risk squamous cell carcinoma (SCC) of the skin [10, 11] including SCC of the genital area [12, 13].

Nuclear medicine plays a pivotal role in the lymphatic mapping of solid tumors and nuclear physicians are the integral part of sentinel node mapping team. Pre-operative lymphoscintigraphy is also an integral part of lymphatic mapping in surgical oncology. Lymphoscintigraphy can help the surgeons to plan the surgery due to sentinel node localization before surgery, can identify the unusual locations of sentinel nodes and may decrease detection failure and false negative rate [16, 17].

Thus far, six studies reported survival benefit of sentinel node mapping in cN0 MCC patients [20–25]. Table 1 summarizes the characteristics of these studies in addition to their main prognostic findings. Overall, these prognostic studies showed that operative nodal staging with sentinel node biopsy is associated with improved overall and disease free survival as compared with nodal observation in cN0 MCC patients. In addition, 3 studies evaluated the prognostic significance of pathological involvement of the sentinel nodes in MCC [26–28] . Brief prognostic data of these studies are available in Table 2.

Table 2. Characteristic of the studies evaluated the prognostic significance of sentinel node pathological involvement in MCC