The authors declare that they have no conflict of interest.

Brain metastases are a rare complication of prostate cancer. They are usually diagnosed in an end-stage disease when the tumor has already spread to the other organs and tissues. We present a case of a male with castration-resistant prostate cancer with bone metastases visualized in 18F-fluorocholine PET/CT scan.

Prostate cancer Is the second most frequently diagnosed cancer and the fifth leading cause of cancer death in males worldwide [1]. The main therapeutic approach for men with locally advanced or metastatic disease is currently androgen deprivation therapy (ADT) [2]. The strategies of ADT include surgical castration (bilateral orchidectomy), medical castration (administration of estrogens, LH-RH agonists or antagonists), combined androgen blockade (surgical castration or a LH-RH agonist combined with a non-steroidal antiandrogen), antiandrogen monotherapy or intermittent androgen deprivation [2, 3]. In case of castration-resistant prostate cancer (CRPC) the available treatments are chemotherapy (docetaxel, cabazitaxel) or hormonal therapy with abiraterone or enzalutamide [4-6].

The most common metastatic sites of prostate adenocarcinoma are bone (84%), distant lymph nodes (10.6%), liver (10.2%), and thorax (9.1%) [7]. Brain metastases are rare and usually appear many years after initial diagnosis [8]. However, their incidence seems to be more frequent than in the past, possibly because of the advances in the CRPC treatment that have prolonged patients’ survival [9, 10].

Here we report a case of a 65-year-old male with prostate cancer who was diagnosed with 18F-fluorocholine avid brain metastases in PET/CT scan.

The disease (poorly differentiated T3a prostate adenocarcinoma, Gleason score 7) was diagnosed in 2009 and was primarily treated with radical radiotherapy. PET/CT scan performed at that time showed bilateral lung metastases. Androgen deprivation therapy was initiated, followed by lung lesions resection. During the course of LH analogue treatment we observed the decrease of serum testosterone to a castrate level and a gradual increase of PSA levels which consequently yielded the diagnosis of CRPC. The second PET/CT scan performed after a three-month therapy showed 18F-fluorocholine avid prostate metastases in mediastinal lymph nodes and Th1 vertebral body. The spread of the disease led to the initiation of chemotherapy with docetaxel. The treatment was continued despite rising PSA levels as it alleviated patient’s bone pains. Bone scintigraphy performed four months later (September 2012) yielded further progression of the disease in the skeletal system – metastases were visualized in the skull, ribs, thoracic and lumbar vertebrae as well as bones of the pelvis (Figure 1). The third 18F-fluorocholine PET/CT scan was performed in December 2012. We observed multiple lesions with increased 18F-fluorocholine uptake in both lungs, chest lymph nodes, bones, subcutaneous tissue and brain (Figure 2). MRI exam performed subsequently confirmed the metastatic etiology of brain lesions. The patient initiated chemotherapy with cabazitaxel and was then lost to follow-up. 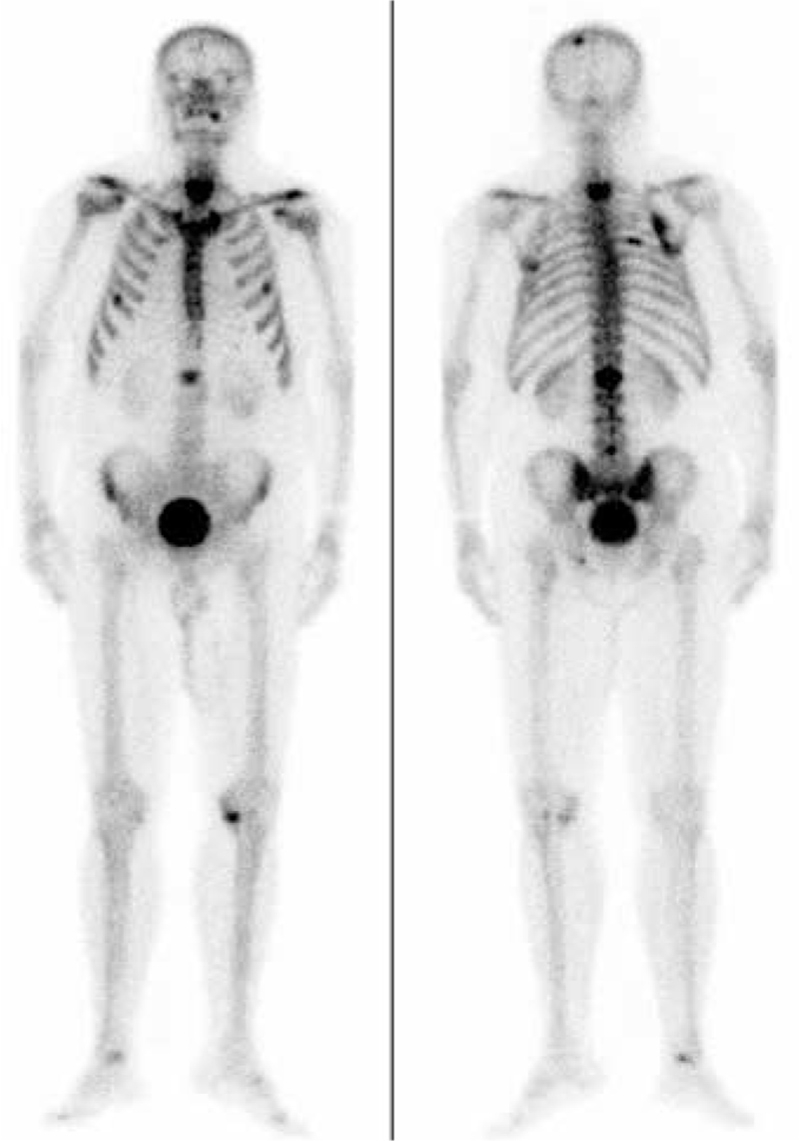 Brain metastases are a rare complication of prostate cancer. Their incidence at autopsy varies from 0.4% to 4.4% but is, however, expected to increase with improving patient survival. Brain metastases are mostly located in the leptomeninges (67%), cerebrum (25%) and cerebellum (8%) and usually occur in patients with end-stage disease who already have lesions in the skeleton, lymph nodes, lungs and liver [9-12].

Prostatic neoplastic cells seem to have a low affinity for cerebral tissue [13]. There are, however, several mechanisms of intracranial dissemination of the disease. The most common is the direct extension from a skull metastasis, which leads to the development of subdural lesions. The other mechanisms are hematogenic lymphatic spread (gives rise to both subdural and intraparenchymal metastases) and vascular embolization [10, 14].

Patients with brain metastases have a poor prognosis and most of them die within 4-6 months after the diagnosis [15]. This is partially because we are still lacking chemotherapeutic agents that could effectively control brain metastases – most of them are incapable of crossing the blood-brain barrier. Moreover, they are often substrates for drug efflux transporters which actively remove them from brain tissue. Docetaxel shows only limited activity against brain metastases. Cabazitaxel, however, reaches high concentrations in the cerebrum and has been proven effective against brain tumors. There are also some promising data concerning abiraterone, CYP17 inhibitor [10].

18F-fluorocholine PET/CT proved to be an effective imaging modality in restaging patients with a biochemical relapse of prostate cancer. It is reported to have a sensitivity of 41-100%, a specificity of 97-100%, and an accuracy of 84-93% [16]. Currently it seems to be the most accurate single-step exam to identify the location of recurrent disease. Furthermore, it has been observed that the results of 18F-fluorocholine PET/CT may cause a change in the treatment plan for up to 48% of patients with recurrent prostate cancer [17].

To sum up, brain is a rare but increasing metastatic site of prostatic cancer. Currently there are limited data concerning the efficacy of the use of chemotherapeutic agents in such a clinical setting. 18F-fluorocholine PET/CT remains the method of choice for restaging biochemically relapsed prostate cancer.