BACKGROUND: We report the use of positron emission tomography (PET) using 18F-FDG for the diagnosis of carditis in children with rheumatic heart disease (RHD).

MATERIAL AND METHODS: Thirty-six children aged 6-17 years (seventeen males and nineteen females) with isolated rheumatic significant mitral regurgitation (MR) underwent FDG-PET scanning of the heart after fasting for 6 h within a period of 2 years. They were divided into two groups based on Jones criteria – acute rheumatic carditis and chronic RHD. Age- and gender-matched twelve children who underwent whole body 18F-FDG-PET scan for routine PET scan for oncological evaluation was taken as controls. Nineteen patients had active carditis and 17 were chronic RHD cases.

CONCLUSION: In view of its poor sensitivity, 18F-FDG-PET is not recommended as a routine imaging modality for the diagnosis of rheumatic carditis.

Rheumatic fever is an abnormal, delayed, probably autoimmune reaction to group A beta hemolytic streptococcal pharyngitis involving joints, skin, brain, serous surfaces and heart valves. Rheumatic fever continues to be a major cardiovascular health problem in the developing countries [1-3]. Carditis is the only component of rheumatic fever that leads to permanent disability [4, 5] and accurate recognition of carditis has significant therapeutic and prognostic implication.

Nevertheless, there are cases where the Jones criteria are not satisfied and clinical consensus is equivocal [8, 9]. In such cases diagnosis of carditis may be problematic, as there is no single diagnostic test. Moreover, Jones criteria were developed to diagnose first episode of acute rheumatic fever. Many other techniques have been used including echo, Doppler, radionuclide imaging, endomyocardial biopsy and serum markers but none of these are fully diagnostic [10-13]. No studies are available in literature regarding the role of positron emission tomography (PET) scan in rheumatic carditis.

We hypothesized that PET may be helpful in picking up the inflammation early where the other modalities of investigation have failed. Fluorine-18-fluorodeoxyglucose (18F-FDG-PET) scan was performed in children (< 18 years) with acute rheumatic fever and carditis, and the results were compared with data in our patients with chronic RHD and with no heart disease.

Children < 18 years, presenting with acute rheumatic fever and carditis with at least moderate mitral regurgitation were enrolled in the study after informed consent of their parents. A total of 19 such patients were included (Group I). The diagnosis of active carditis was made according to modified Jones criteria along with raised Anti-streptolysin O (ASLO) titer in 13 cases. In the remaining 6 children clinical assessment, elevated erythrocyte sedimentation rate (ESR), C-reactive protein (CRP) and nodules on mitral valve leaflets on echocardiography pointed to active carditis. Modified Jones criteria could not be used in these children, as active carditis occurred over a previous RHD diagnosis where Jones criteria may not be applicable. A second group (Group II) consisted of 17 children (< 18 years) who had chronic rheumatic mitral regurgitation, at least moderate in severity, with no clinical or laboratory evidence of acute carditis. Twelve children < 18 years who had a normal heart and were undergoing PET scan for routine oncological evaluation like lymphoma were also enrolled in the study as controls (Group III). Patients in New York Heart Association (NYHA) functional class IV were excluded, as were patients with associated aortic, tricuspid and pulmonary valve involvement. Patients with active carditis who were on more than 7 days on steroid treatment were also excluded.

The study was done after at least 8 hours of fasting. Fasting blood glucose level was < 90 mg/dL in all patients. Patients were administered 5.2 MBq/kg (0.14 mCi/kg) body weight of 18F-FDG intravenously through an indwelling cannula. Images were acquired at 45 min after 18F-FDG injection on a dedicated PET-computed tomography (CT) scanner (Siemens, Biograph-2, USA). Images were acquired in craniocaudal direction with one bed position of 10 min duration. The PET images were reconstructed by iterative reconstruction ordered subset expectation maximization (OSEM), with image size 128 x 128 matrix, zoom 1, and full width half maximum of 5 mm. Analysis and interpretation of the PET, images were done after displaying the images in conventional cardiac slices.

The basic demographic profile of all cases is given in Table 1. Overall children with active RHD were younger as compared to those with chronic RHD. A total of 43 of 48 children showed diffuse uptake pattern on 18F-FDG-PET scan. This pattern was present in all Group II and Group III children. Of Group I (active carditis) 14 of 19 children showed diffuse uptake similar to chronic RHD cases and normal controls. Five of active carditis group failed to show any uptake. The age of these 5 children ranged from 7 to 11 years with mean no different than the mean of Group I children. Figure 1 shows diffuse uptake patter on 18F-FDG scan in a 12-year-old child with chronic RHD. Figure 2 shows absence of any uptake in an 11-year-old child with active rheumatic carditis.

Table 1. Demographic profile of all cases 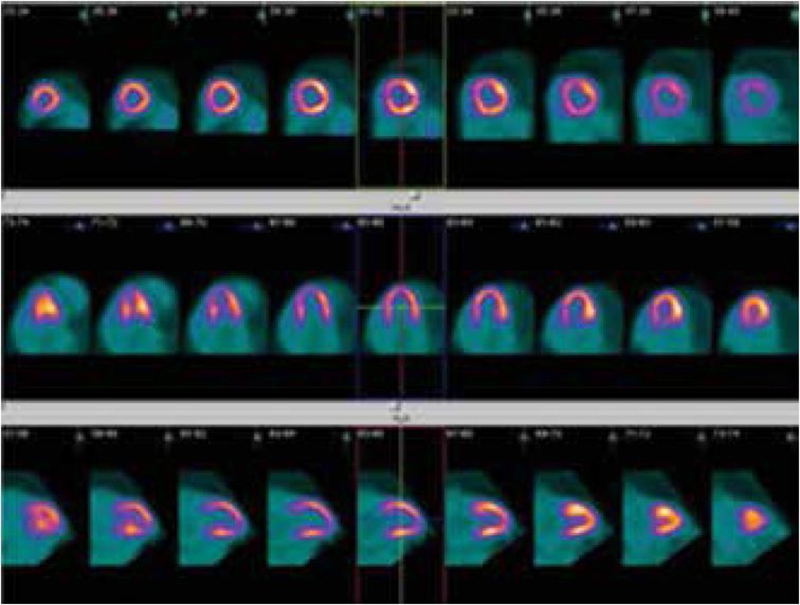 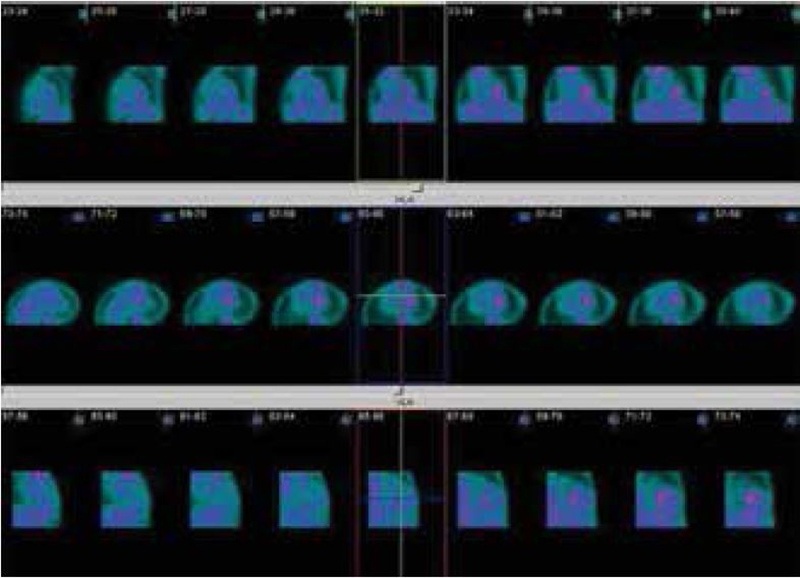 We analyzed data to see if any of the clinical or laboratory parameters were associated with absence of uptake on 18F-FDG scanning in those with active carditis. There was no correlation of absent uptake with presence or absence of congestive heart failure, anemia, elevated ASLO titer, elevated ESR and CRP No association was seen with severity of mitral regurgitation or nodules on mitral valve leaflets as seen on cross sectional echocardiography.

Fluorine-18-FDG is a labeled glucose analog used as a radiotracer in PET Following cellular uptake, it is metabolically trapped and consequently gives an image which portrays tissue glucose utilization. Inflammatory cell take up large amounts of glucose as a result of an increased metabolic rate. Indeed, inflammatory foci are the main cause of false positive 18F-FDG scans performed for malignant disease. Therefore 18F-FDG represents a primary agent for localizing inflammation. It has an in plane spatial resolution of 4 to 8 mm, which provides better images compared to conventional single photon emission computed tomography (SPECT) [14]. PET is a very useful tool for diagnosing inflammation and yields positive results earlier than other studies. The radiation received is comparable to other standard diagnostic modalities. Thus it is a safe and relatively less invasive modality for early diagnosis of inflammation.

PET has been used to detect inflammatory activity in certain cardiac diseases like Kawasaki disease, vasculitis and cardiac sarcoidosis [15-18]. Cardiac PET using 18F-FDG has been used for identification of cardiac sarcoidosis and assessment of disease activity. In a study by Okumura et al., 22 patients with systemic sarcoidosis were classified into two groups of 11 each according to the presence or absence of sarcoid heart disease [19]. PET could detect cardiac sarcoidosis at an early stage of the disease, in which fewer perfusion abnormalities and high inflammatory activity are noted, before advanced myocardial impairment. Fasting 18F-FDG-PET detected abnormalities more frequently than either Technetium-99m sestamibi (99mTc-MIBI) SPECT or Gallium-67 (67Ga) Scintigraphy in patients with cardiac sarcoidosis. However, in this study all patients were adults and majority of them were in their 5th or 6th decade. Our study group includes predominantly the pediatrics population with age ranges between 6 and 17 years.

Since inflammation is underlying pathology in rheumatic carditis, we undertook this study to see if 18F-FDG positron emission tomography (PET) is useful in diagnosing the rheumatic carditis. We also analyzed our data to see the relationship of PET findings with the age, sex, hemoglobin, ESR, C-reactive protein, ASLO titer, mitral valve nodularity on echo, etc.

There is little data on PET scan findings in children. Most studies have focused on its usefulness to detect myocardial ischemia, e.g. in Kawasaki disease, post operated congenital heart disease with coronary translocation, metabolic cardiomyopathy, etc. [20]. In an article by Shammas et al., myocardial uptake can vary from no discernible uptake to intense activity throughout the left ventricular myocardium in normal children [21]. Although chances of intense activity are remote in fasting state, it is well described [22]. In our study all children with no heart disease also showed diffuse myocardial uptake on 18F-FDG-PET scan.

The children with chronic RHD were no different from controls. However 5 of 19 children with active carditis showed no uptake, the reason for this finding remains unexplained. There is no data in literature on PET scan findings in patients with RHD, adults or children. We could not associate the scan results with any of the known variables for activity such as anemia, raised ESR or CRP or ASLO titer and with nodularity on mitral valve in echocardiography.

During fetal development glucose metabolism is favored, whereas fatty acids are the primary energy substrate in the adult myocardium. Significant shifts in substrate preference occur in response to dietary (fasting/refeeding) and physiological (exercise) stimuli. Certain pathophysiological contexts, like hypertrophy, hypoxia, and ischemia, drive metabolism toward a fetal-like state, whereas in diabetes the heart utilizes fatty acids almost exclusively. These metabolic alterations are accompanied by changes in expression of enzymes involved in fatty acids utilization mediated by nuclear receptors (peroxisome proliferator-activated receptors (PPAR) and estrogen-related receptor (ERR)) and the NR co-activator PGC-1 (PPAR coactivator-1). It is also known that with aging, the contribution of the myocardial fatty acid oxidation to overall myocardial substrate metabolism declines with age from the experiments done in mouse and rats.

The possible reason for the uptake pattern seen in the control and the patients in the study group may be because of the predominant uptake of the glucose in the fasting states in children in contrast to the pattern in adults where the predominant fuel is fatty acids [23]. The absence of uptake pattern seen in some of the patients with active group is possibly because of the disturbance in the normal metabolic milieu by the inflammatory mediators in some of the active patients which results in the perturbation of this normal glucose uptake and resulting in the no uptake pattern. However, only 5 patients showed such pattern. This could be related to the spectrum of severity of the disease process which at a particular threshold of severity results in metabolic derangement. It is not clear at what age this fetal type of glucose uptake pattern becomes the adult type of fatty acid uptake pattern and needs further research and clarification.

Although we do not recommend PET scan for detection of active rheumatic carditis, this study has helped us to know the pattern of PET scan in normal children which is similar to those with chronic RHD. In our opinion this is the first 18F-FDG-PET study carried on pediatric cardiac patients with RHD, active and chronic.

There are certain limitations in our study. Our study includes only small number of patients to support the role of PET scan in diagnosing the rheumatic carditis. All active carditis patients were on steroids for variable period but for less than 7 days when the study was undertaken, the drug was not discontinued due ethical reason.