The authors declare that they have no conflict of interest.

MATERIALS AND METHODS: Gastric emptying was assessed in 19 patients with type 2 diabetes (mean age of 61.04 ± 6.09 years) and 6 healthy volunteers. Characteristics of the patients were sex, age, duration of diabetes, blood sugar and serum HbA1c level.

CONCLUSION: Results of this prospective study indicated that level of serum HbA1c is an effecting factor on gastric emptying time in patients with type 2 diabetes; however, these preliminary findings should be validated in larger and well-designed studies.

Gastroparesis is a gastric related chronic disorder which is associated with delayed emptying of solids/liquids from the stomach. It is estimated that about 4% of the population suffer from gastroparesis [1].

One of the observed cases of gastroparesis is among the patients with diabetes. Results of the studies report gastropare- sis in patients with diabetes, but predictors of gastric emptying in these patients are not well defined [2-6] and relationship between rate of gastric emptying and their clinical and biochemical symptoms is usually weak [4, 5, 7]. Therefore it is usually suggested to do objective measurement in order to establish more exact diagnosis of gastroparesis [3].

Nineteen type 2 diabetic patients (9 men and 10 women) with a mean age of 61.04 years (± SD = 6.09) who were referred to the gastroenterology clinic at our hospital were invited to participate in our study. Also, 6 healthy volunteers without gastrointestinal symptoms were considered as control group of present study.

This study complies with the Declaration of Helsinki, and it was approved by the institutional ethics committee of our research institute. Before the study, in order to be aware of the study, whole of the procedure was explained to all of the patients and healthy individuals and consent form was signed by them satisfactorily. They also had option to withdraw from the study at any time they desired.

In order to reduce effect of diurnal activates on gastric emptying, the study was conducted in the morning. On the day of the study, blood glucose concentration of each patient was checked to be in the range of 3.5 to 9.0 mmol/L. Each patient was given a test meal composed of fried eggs labeled with10 mCi of 99mTc. The test meal was served to the patient with 150 mL non-labeled water.

In order to study gastric emptying by scintigraphy, scanning was started for each patient immediately after ingestion (time 0) continued for a couple of minutes. The study was reaped every 30 minutes over 120 minutes (total number of 5 measurements for each case). The scintigraphic data was acquired in anterior and posterior projections in a fixed supine position. Region of interest of the stomach was drawn visually for the first frame and then replicated on later images. Data acquisitions were performed by a Gamma camera (Pegsys, ADAC laboratory, USA) equipped with a low-energy high-resolution collimator.

Geometric mean of the recorded activities of the frames were plotted against time to determine gastric emptying time and gastric emptying halftime (T1/2) as the time point at which the amount of the activity of the stomach reaches to 50% of its maximum activity. Gastric empting half time is a common parameter for scintigraphic studying of gastric emptying. Based on the types of the radio labeled meal, this parameter may range from 36 minutes to 169 minutes [14].

All measurements were corrected for radionuclide decay by multiplying recorded activities to its corresponding decay factor (DF). Decay factor expressed as:

where t is the time (minutes) elapsed after the first measurement.

A P value of less than 0.05 was considered to be statistically significant. The SPSS for Windows software package (Release 18, SPSS Inc., Chicago, Illinois) was used for the statistical analysis. 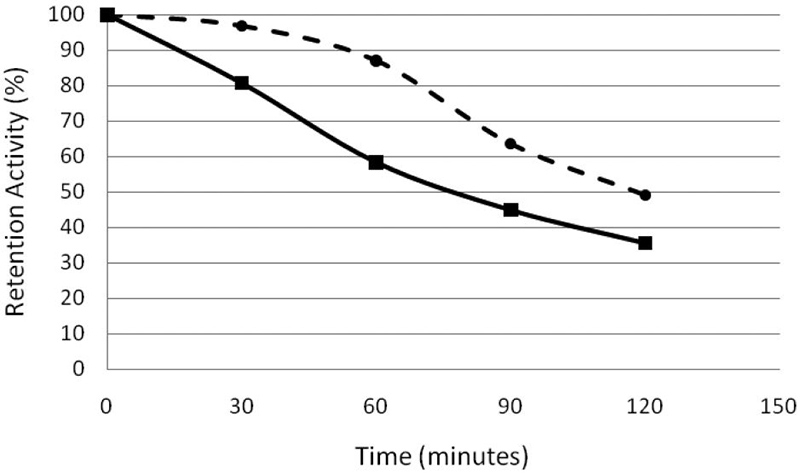 In patients with diabetes suffering from delayed gastric emptying, observed clinical symptoms was as follows: asymptomatic (30.4%), flatulence (26.1%), early satiety (13%) and the rest was a mixture of two or more of above mentioned symptoms.

Mean of the baseline characteristics of patients with diabetes and their correlation with gastric emptying time are presented in Table 1.

Table 1. Baseline characteristics of patients and their correlation with gastric emptying time

Laboratory findings of the patients with diabetes were also evaluated. Statistical analysis of these data revealed that there was no significant correlation between blood sugar concentration and gastric emptying time of the patients with diabetes (P-value = 0.869). But we observed that HbA1c level was statistically correlated to the gastric emptying time (P-value < 0.05).

History of all the patients were also assessed and it was observed that correlation between gastric emptying time and duration of the diabetes was not statically significant (P-value = 0.148).

In diabetic patients of our study, any significant association was not found between gastric emptying and sex. Gastric emptying half time (± SD) in diabetic men and in diabetic women was 109.87 (± 28.47) hours and 110.78 (± 25.08) hours, respectively. This finding was in contrast with results of previous studies by Samsom et al. [15] and Joens et al. [16] indicating that gastric emptying was slower in diabetic women than in diabetic men. One possible reason for this disagreement may be small number of subjects studied in our study which should not be excluded. In order to more detail evaluate of this reason another study with a larger sample is recommended.

Based on the results of laboratory findings of the patients enrolled in this study, there was no correlation between blood sugar and delayed gastric emptying, but significant correlation was observed between gastric emptying time and serum HbA1c levels. Our finding was in a line with findings of Schvarcz et al. [17] who concluded that any changes in blood glucose may have a significant effect on gastric emptying time. This was found in both normal subjects and patients with insulin dependent diabetes mellitus. But our results was in contrast with results of the study by Reddy et al, which was performed on 250 diabetic patients [18]. Their study was a retrospective study on HbA1c level near the performance of gastric emptying scintigraphy. As it was indicated by the authors, because of this limitation it was not possible to assess preprandial or postprandial glucose values. Therefore they recommended further studies to prospectively evaluate more factors such as postprandial glycemia, serum HbA1c levels and duration of diabetes in order to further elucidate the effect of these variables on gastric emptying time. Our study, as such a study and beside assessment of other variables, also evaluated HbA levels and duration of diabetes and resulted in observation of correlation between HbA1c levels and gastric emptying time.

In patients with type 2 diabetes, delayed gastric emptying time was statistically correlated to HbA1c level, but not to sex, age group, blood sugar concentration and duration of diabetes.