Complex Regional Pain Syndrome (CRPS) is a neurological disorder of unknown etiology which may lead to severe disability. Its diagnosis is very difficult and based on diagnostic criteria which have been changing over last years. Still, there is no golden standard in diagnosis of this entity.

Three-phase bone scan is a widely used diagnostic modality which has been proved useful in CRPS evaluation. The syndrome may present various scintigraphic patterns. Different diagnostic modalities can also be helpful when CRPS is suspected including plain film radiography, magnetic resonance imaging and ultrasonography. Multidisciplinary approach is necessary for proper and quick diagnosis.

We present a case of CRPS in 12-year-old girl in whom the diagnosis was based on the bone scan.

Complex Regional Pain Syndrome (CRPS) Is a neurological disorder of unknown etiology which may lead to severe disability. Its clinical manifestations include pain, hyperalgesia, edema, vaso- and sudomotor disorders, movement impairment and autonomic dysfunction. CRPS type I is characterized by a lack of identifiable nerve injury. Such nerve injury can be identified in CRPS type II.

Diagnosis of CRPS is very difficult and based on diagnostic criteria. These criteria have been changing over the last two decades. Lab tests and diagnostic imaging including plain film radiography (PFR), magnetic resonance imaging (MRI) and three-phase bone scan (TPBS) can be helpful. Still, there is no golden standard in diagnosis of CRPS which makes this clinical entity challenging [1–4].

We are going to present a case of a 12-year old girl who developed CRPS after experiencing minor trauma. The girl was bitten by a viper 2 years prior to the onset of the syndrome, which makes this particular case especially interesting. TPBS enabled the diagnosis despite the fact that the pattern was atypical. We will also present follow-up studies which will show the dynamic evolution of the disease.

A 12-year-old female was admitted to the Children’s Clinical Hospital in Lublin, Poland, due to severe left lower extremity pain, localized mainly in the forefoot. The pain appeared after she had suffered minor knee trauma during her physical education lesson, about 2 months before hospitalization. Moreover, the patient was bitten by a viper in the left calf about 2 years before the knee injury (the event details including the viper species remained unknown).

The girl was complaining about pain, allodynia and hyperalgesia of her left foot, ankle and distal part of her calf which was causing difficulties in walking. Physical examination initially revealed local tenderness, especially in the metatarsophalangeal joints I–IV. Pain was not limited to the distribution of a single peripheral nerve. At the beginning, forefoot edema, intermitting sweating and skin temperature reduction were slightly expressed. The follow-up examination proved clinical symptoms to be more prominent. 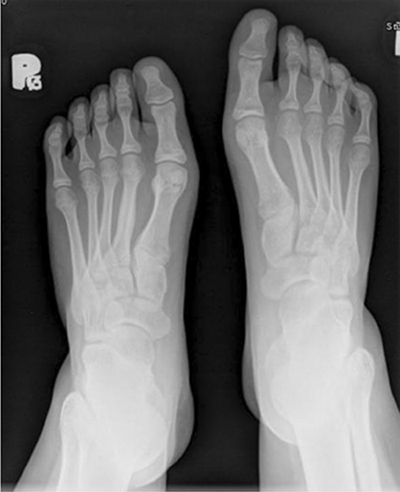 Minor hypertrophy of the synovium of the metatarsophalangeal joints I–IV was found in the USG.

Consequently, the examination results didn’t entirely match the patient’s complaints so a psychological and psychiatric consultations were conducted. Both opinions were similar, highlighting a strong psychological component of presented symptoms. The psychological profile suggested behavioral problems. In addition, an episode of depression was discovered.

The next diagnostic step was TPBS.

All scintigraphic examinations in this case were performed as triple-phase bone scan (TPBS) with 99mTc-MDP (methylenediphosphonate) being injected intravenously. The dose of the radiotracer was calculated using Webster’s rule. In the first phase (blood flow phase) 2-second images were acquired during the 1st minute after the radiotracer injection. The second phase (blood pool phase) image was acquired directly after the first phase ended, acquisition lasted 5 minutes. In both the 1st and 2nd phases, the field of view was set at the ankles. The third phase (metabolic phase) image was obtained 2 hours after the radiotracer injection — a whole-body scan was performed as well as lateral views of both feet and ankles. Scintigrams evaluation included visual interpretation of all three phases as well as time-to-activity curves analyses, which were derived from regions of interest drawn around the ankle joints.

In the first TPBS (Figure 2) the 1st and 2nd phases revealed markedly decreased blood flow and blood pool in the affected limb (compared to right, healthy limb, blood flow was reduced by about 50%). The 3rd phase showed decreased accumulation within the bones and joints of the affected limb, including growth plates (typically well depicted by high radiotracer concentration). Although decreased radiotracer accumulation is not a typical pattern for CRPS, this diagnosis was suggested by nuclear medicine physician as CRPS with atypical scintigraphic pattern. 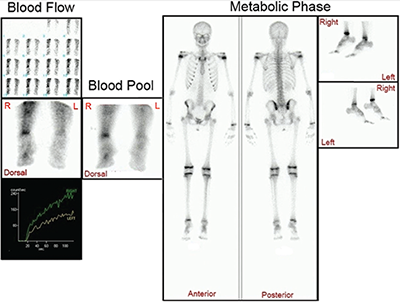 Figure 2. Primary scintigraphic study — the 1st and 2nd phases revealed blood flow and blood pool decreased in the affected limb by about 50%; the 3rd phase showed decreased accumulation within the bones and joints of the affected limb, including growth plates

The diagnosis was established and treatment started, mainly physiotherapy.

After three months the patient underwent a second TPBS (Figure 3). It revealed more severe abnormalities in all three phases of the study with further decrease in blood flow, the blood pool and radiotracer accumulation within the affected limb (compared to right lower extremity blood flow was reduced by more than 75%). The growth plates were very poorly depicted, nearly indistinguishable. This suggested further impairment of perfusion and bone metabolism. 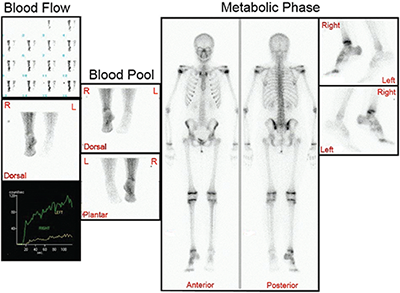 Figure 3. TPBS 3 months after the diagnosis — there are more severe abnormalities in all three phases with further decrease in blood flow (to about 25%), blood pool and diminished radiotracer accumulation within the affected limb. Growth plates very poorly depicted

The left lower extremity appearance was also changed: the foot and calf were cold and wet with livedo reticularis sign (Figure 4). Figure 4. The appearance of both feet at the time of the second scintigraphic study: left lower limb presents livedo reticularis sign and trophic changes of nails. Skin was cold and wet

All these findings confirmed the diagnosis of progressive CRPS. Furthermore, the third TPBS was performed 15 months after the onset of the symptoms (Figure 5). The obtained results were completely different from the previous studies. Both blood flow and blood pool were equal in the regions of interest set at both ankles. The 3rd phase revealed increased radiotracer uptake within the left foot bones, greater than in the right one. The radiotracer uptake was still reduced within the bones of the left knee, but all growth plates were well depicted. 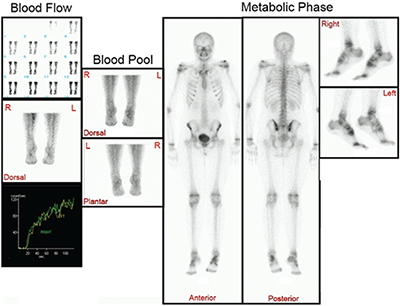 Figure 5. TPBS 15 months after the diagnosis — both blood flow and blood pool are equal in regions of interest set at both ankles. The 3rd phase revealed increased radiotracer uptake within bones of the left foot, greater than in the right foot. The radiotracer uptake was still reduced within the bones of the left knee, all growth plates well depicted

Clinical pain and edema have diminished.

The patient remains under physician’s supervision. Nearly three years after the onset of the disease there are still recurrences of the symptoms, mainly in stressful situations. Recently the patient’s condition has worsened and next bone scan is going to be performed.

The classical CRPS diagnostic criteria introduced by the International Association for the Study of Pain are as follows:

Recently more precise criteria (the “Budapest criteria”) have been developed [1].

There is only one reported case of CRPS provoked by a viper bite. In that case an aggressive CRPS appeared after a bite of a mountain pit viper in Nepal [5]. In our case, it is impossible to find any kind of direct connection between the viper’s bite and the onset of CRPS two years after the event, but we believe that it cannot be ignored since it may be some kind of predisposing or a facilitating factor.

Another possible mechanism is a vasomotor dysfunction accompanied by structural changes in the brain, which lead to sensitization. A significant reduction and finally an absence of normal sensory transmission from the affected limb via the thalamo-cortical paths lead to increased excitability. Brain perfusion SPECT studies indicate abnormal perfusion of the thalamus contralateral (so related) to the affected limb [3, 8].

CRPS can be divided into three phases. The first (hyperemic) phase is characterized by pain, tenderness, edema, increased temperature, sweating, redness and rapid growth of hair and nails. In the second (dystrophic) phase, usually after several weeks, dominating symptoms include burning pain with hyperalgesia, cold skin, hair loss, paleness and cyanosis, trophic changes of nails. Finally in the third (atrophic) phase, after a few months there are contractures, muscle atrophy and movement limitations. Characteristic changes of temperature enable thermography to be one of the diagnostic tools when CRPS is suspected. Usually difference of at least 1°C is considered significant [3, 6, 9, 10].

In children, CRPS more commonly affects girls in early adolescence (12–14 years old). It is suggested that it may be related to the estrogens [11, 12].

Bone scan is a commonly performed nuclear medicine study both in adults and children and is an easy way to evaluate local bone metabolism. Modification of this study — TPBS which includes dynamic part allows evaluation of local blood flow and blood pool — can be helpful in a wide variety of clinical situations from infection and inflammation, through benign and malignant tumors to pain of unknown origin, and possibly to bone pathology. Suspected CRPS is one of the indications for TPBS [13].

CRPS presents a great variety of scintigraphic patterns in TPBS. Increased blood flow and blood pool together with increased radiotracer uptake in bones of the affected limb, reflecting increased metabolism, are believed to be the typical pattern. Decreased blood flow and blood pool with decreased metabolism constitute one of the atypical patterns which may be related to persistent use of the affected limb [3, 14].

Despite its common use in patients with CRPS, there is no agreement on the criteria which should be fulfilled by TPBS to diagnose this entity. Recent meta-analysis indicates that the sensitivity of TPBS in CRPS is 87%, but specificity only 67% [4]. One of the most recent studies by Moon and al. indicates that the best predictive value is associated with the scintigraphic pattern in which there is reduced blood flow and blood pool accompanied by decreased, normal or increased radiotracer uptake in the third phase [15].

CRPS also presents some common features in other modalities.

Bone marrow and skin edema with both joint effusion and abnormal muscle signal can be observed in MRI. “Snow storm” image can be found in USG — increased concentration of hyperechogenic tissues together with reduction of hypoechogenic ones (muscles). Abnormal blood flow can be detected by the Doppler-USG [16–19]. To our knowledge USG findings have not been studied in joints.

CRPS is a challenging clinical entity and requires a multidisciplinary approach. There is no single study or lab test that can confirm or exclude CRPS. As underlined by many authors, a careful clinical observation is essential for proper diagnosis. Still, in modern medicine there is a wide spectrum of studies which are non-invasive, safe and harmless, so can be performed together and repeated. They may significantly facilitate the diagnosis. In spite of divergent opinions, TPBS is one of the most useful studies in this clinical situation.