Radioguided surgery using 68-gallium labelled somatostatin analogues is a promising method for detection of small, intra-abdominal, neuroendocrine neoplasm (NEN). However, due to high background activity (physiological uptake in e.g. spleen, adrenal glands and kidneys) tumours of the tail and body of pancreas might be impossible to detect with hand-held gamma probe. Therefore a new concept of intraoperative PET/CT scan of the resected tissue can be helpful in determining whether the tumour has been excised within the margins of healthy tissue.

A 71-year-old woman with primary, non-metastatic NEN of the tail of pancreas is described. The tumour was diagnosed using MRI and PET/CT scan. Before operation patient was administered intravenously 80 MBq of 68Ga-DOTATATE. The surgery procedure was performed 60–180 minutes post injection. During the procedure pancreas was visualized, but the tumour could not be localized neither with palpation nor gamma probe. The tail of the pancreas was resected en bloc with spleen and adjacent lymph nodes. PET/CT scan of the tissue specimen was performed immediately followed by pathological examination. PET/CT scan of the resected tissue showed moderate activity in the tail of pancreas, and a small focus of high activity in the tail. Area of high SSTR expression in the tail corresponded with preoperative findings in MRI and whole-body PET/CT. Histopathological examination of the specimen confirmed the presence of neuroendocrine tumour grade 1.

Immediate PET/CT scan of the surgical specimen can bring new quality to intraoperative assessment of completeness of resection of neuroendocrine tumours.

Pancreatic neuroendocrine tumours (PNENs) are heterogenic subgroup of gastropancreatic neuroendocrine tumours GEP NENs, and comprise approximately 10% of all pancreatic tumours [1, 2]. Characteristic feature of well differentiated PNENs (G1 and G2 according to the WHO classification) is overexpression on their cell membrane of somatostatin receptors (SSTR) — mainly subtype 2 [3, 4]. Overexpression of SSTR2 on PNEN cells enables the application of somatostatin-labelled analogues not only in diagnosis and therapy, but also in an intra-operative localizing of tumour [5–8].

During surgery, small pancreatic NEN is very difficult to detect and remaining tumour tissue leads to unsuccessful treatment. Because of such difficulties new, intra-operative techniques are essential for real-time primary tumour detection leading to its full excision. Preliminary report has shown that in spite of its drawbacks (high background activity particularly from kidneys and spleen) intraoperative radio-guided surgery (RGS) using a 99mTc labelled somatostatin analogue — [99mTc-EDDA/HYNIC] octreotate may improve the rate of primary tumours detection and small metastases and increase efficacy of surgical treatment of GEP-NEN [9]. Recently for the first time intraoperative gamma probe detection using 68Ga labelled somatostatin analogues for a GEP NEN in 9 patients has been reported by Kaemmerer et al. [8]. Intraoperative 18FDG PET/CT as a new oncological approach was introduced by Hall et al. [3].

A 71-year-old female with diabetes type II, hypertension, psoriasis and chronic kidney disease (stage 1) was admitted in May 2012 to the Department of Rheumatology, with the six-month history of myalgia, particularly in the shoulder and pelvic girdle, associated with arthralgia and chronic fatigue.

Laboratory tests showed 4–5 fold increase of plasma creatine kinase (CK). Rheumatoid factor (RF) and CRP were normal. The blood sample was taken for diagnosis of other causes of myopathy.

It was considered highly likely that this patient’s weakness, myalgia and elevated CPK occurred as part of a paraneoplastic syndrome, despite patient’s good general condition and lack of obvious symptoms that might help localize a potential site of disease. As a next step of diagnostic evaluation chest X-Ray, abdominal ultrasound, chest, abdomen and pelvis MR were performed. An abdominal MR scan showed a large irregular focal mass in the head of the pancreas measuring 26 × 38 × 47 mm, hyperintense on T1- and T2-weighted images (Figure 1). The mass was isointense with the intraabdominal and subcutaneous fat on both T1- and T2-weighted images and was found to be homogenously suppressed on frequency selected fat-suppression images. There was no contrast enhancement after the use of gadolinium-DTPA. In the tail of the pancreas MR demonstrated a small lesion 9 mm in diameter, enhancing in both the arterial and portal venous phases — with typical appearance of pancreatic NEN. Contrast enhanced MR imaging of the pancreas confirmed the suspicion of NEN tumour in the tail (Figure 2). The patient was immediately referred to the Department of Surgery (Warsaw Medical University Hospital) for further diagnostic evaluation in order to establish the optimal management. Before surgical treatment patient underwent whole body PET/CT imaging (Siemens Biograph 64) using 68Ga DOTATATE in July 2012. The PET/CT imaging demonstrated increased uptake in the tail of the pancreas (SUVmax 16.2; physiological SUVmax < 9.2 [10]) corresponding to the hyperattenuated tumour seen on CT (Figure 3). There was no uptake of the radiotracer in the head of pancreas. Other sites of disease have been ruled out. Cancer plasma markers: CA 19–9 (4.09 U/ml), CgA (88 μg/l) showed proper values. Based on the confirmation of the presence of overexpressed SSTR on the tumour cells — characteristic feature of well-differentiated NEN — distal pancreatectomy with en bloc splenectomy was planned. Due to the high density of SSTR2 on pancreatic NEN cells, we hypothesized that it is feasible to utilize intraoperative RGS and ex vivo specimen PET/CT imaging. Therefore, for the first time the new approach of intraoperative handheld gamma probe detection accompanied by specimen PET/CT imaging using preoperative 68Ga-DOTATATE injection was used for neuroendocrine tumour localization and verification of resection completeness in our patient. 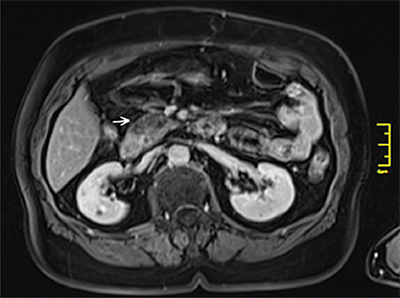 Figure 1. MR scan showed a large irregular mass in the head of the pancreas hypointense on fat-suppressed T1-weighted images 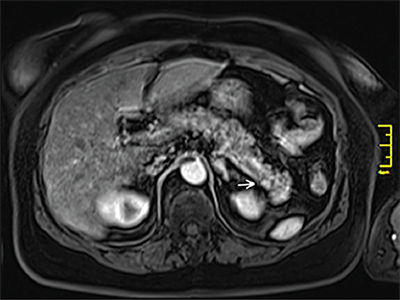 Figure 2. Contrast enhanced MR imaging of the pancreas confirmed the suspicion of NEN tumour in the tail

Figure 3. PET/CT with 68Ga DOTATATE demonstrated increased uptake in the tail of the pancreas (SUVmax 16.2) with normal uptake in the head of pancreas. A. Fusion PET/CT; B. PET; C. CT

On the day of surgery, a dose of 80 MBq 68Ga-DOTATATE was injected iv approximately 60 minutes before the surgical exploration. On opening the abdominal cavity there was no macroscopic signs of neoplasmatic dissemination. Intraoperatively, a handheld gamma probe (Neoprobe 2000 series) was used to assess the localization of the site of increased 68Ga-DOTATATE uptake within the tail of the pancreas. Identification of tumour was hindered by high background activity. RGS technique in the presented case did not allow identification of primary tumour in the pancreas. Lesion was not palpable and non-visible by surgeon. The patient subsequently underwent distal pancreatectomy en bloc with splenectomy. The resected specimens underwent imaging with PET/CT scanner at 200 minutes after the 68Ga-DOTATATE injection. PET/CT (6 min/bed) imaging revealed the presence of increased radiotracer uptake in the tail of pancreas, corresponding to the site previously seen on the preoperative diagnostic whole body 68Ga-DOTATATE PET/CT and confirmed completeness of surgical resection (Figure 4). The specimens were sent to Department of Pathology for standard pathologic evaluation. Histopathological examination confirmed the diagnosis of neuroendocrine tumours G 1 (Figure 5). Lymph nodes were negative and surgical margins were clear of tumour tissue. The postoperative course was complicated by pancreatic leak. Nevertheless the patient was discharged in good condition.

Figure 4. PET/CT with 68Ga-DOTATATE of resected specimens revealed the presence of increased radiotracer uptake in the tail of pancreas, corresponding to the site previously seen on the preoperative diagnostic whole body 68Ga-DOTATATE PET/CT and confirmed completeness of surgical resection. A. Fusion PET/CT; B. PET; C. MIP

Pancreatic NEN comprise a heterogeneous group of neoplasms for which treatment is variable, depending on the size, localization in the pancreas, clinical stage (TNM), differentiation grade (histological grading system), functional status (functional or non-functional) as well as other factors. In case of localized PNEN complete resection (R0) of the tumour is sufficient to cure the disease but it is essential to confirm negative margins both intraoperatively and on final pathology. Localized well differentiated PNENs may be removed with organ preserving techniques like: enucleation or distal pancreatectomy. The main concern in the organ sparing surgery is the difficulty of precise intraoperative tumour localization, margin tumour delineation and real-time verification of complete resection with the possibility of missing small- and nonpalpable tumours. Because of such difficulty new intraoperative techniques have been under clinical research including intraoperative US and RGS using labelled somatostatin analogues. Recently the preliminary data [8] shown that intra-operative RGS using gallium-68-labeled somatostatin receptor analogues is a promising method for real-time detection of small pancreas NET and for assessing surgical margins by detecting presence of tumour ex vivo within the resected tissue. The successful use of RGS in PNEN patients is a function of radiopharmaceutical uptake by tumour cells, biodistribution and its clearance kinetics, anatomical sites of disease and gamma probe engineering. All this multiple factors have been determining the tumour to non-tumour (T/NT) ratio and detection threshold. Due to the high photon energy of 68Ga isotope and physiological uptake from liver, kidney and spleen, achieving diagnostic T/NT ratio intraoperatively in upper abdomen may be difficult and potentially complicate tumour detection efficiency.

Therefore to improve precise tumour localization and verify completeness of resection we combined RGS with ex vivo PET/CT imaging of resected tissue by using preoperative 68Ga-DOTATATE injection. This innovative approach is based on expression of SSTR2 on cells tumours — so analysis of diagnostic preoperative SRS PET/CT imaging had a crucial effect on selecting proper patient for this modality. A semiquantitative parameter SUVmax derived from 68Ga-DOTATATE PET/CT as an indirect method for receptor density mapping. In our patient SSTR2 expression was relatively high (SUVmax 16.2) but localization of tumour near the hilum of the spleen seriously hampered the gamma-probe detection. Knowledge of the normal 68Ga-DOTATATE distribution is very important for understanding RGS limitations and possible pitfalls in intraoperative localization of pancreatic NET. The normal distribution of 68Ga-DOTATATE was described by Kunikowska et al. [10]. Using semiquantitative analysis the highest physiological uptake of 68Ga-DOTATATE in the abdomen was seen in the spleen, [SUVmax, 18.9 (6.6)] due to high expression SSTR2. The kidney showed a high uptake in the cortex and the urinary tract with SUVmax 14.2 (3.6) [10]. Keeping these in mind, it is very probable that NET in the tail of the pancreas with lower or near the same density of SSTR2 as in spleen may not be detected with RGS — like in our presented case.

In case of unsuccessful gamma probe detection of tumour localization, other diagnostic tools may be very helpful. According to literature IOUS [4] can be used to detect tumour localization and enables the surgeons to perform more precise tumour excision with good safety margin and without injury to the main pancreatic duct. In case of small, non-palpable PNEN, intraoperative localization remains always difficult and all this methods combined may provide to more effectiveness surgical treatment.

The main limitation of presented approach is the 68 minute half-life of 68Ga isotope. This is relevant both to intraoperative gamma probe detection and specimen PET/CT imaging. By increasing the scan time (6 minutes for acquisition), we have been able to generate high quality images on the specimen PET/CT 200 minutes post-injection of the 80 MBq 68Ga-DOTATATE. The further studies are necessary with regard to the optimal dose and the optimal time of injection prior to the operation. It is also very important to find all factors affecting the uptake of 68Ga labelled somatostatin analogues therefore resulting in the change of T/NT ratio and quality images on ex vivo specimen PET/CT Factors that may affect outcome of intraoperative 68Ga diagnosis are enlisted in Table 1.

Table 1. Factors to be taken into account when using 68Ga-DOTATATE in RGS and intraoperative PET/CT scan

This case report may give a special attention to change the strategy of surgical management of localized, small, well differentiated PNEN to provide long term cure to the patient and prevent recurrence. Basing on our experience in surgical management in case of localized well differentiated PNET we strongly recommend combined modality approach: RGS with IOUS and ex vivo PET/CT imaging of resected tissue, however further studies are needed.