There are no conflicts of interest in this work.

BACKGROUND: 123I-FP-CIT (DaTSCAN) SPECT studies of the nigrostriatal pathway are a valuable tool in the diagnosis of movement disorders. However some scans are reported as equivocal with potential adverse consequences. We investigated whether the use of quantification of tracer uptake within the striatum can be used to reduce the number of equivocal reports.

MATERIAL AND METHODS: BRASS software (Hermes, Sweden) was used to quantify striatal tracer uptake in DaTSCAN studies of patients referred to our institution. Scans were quantified and numerical limits were determined to distinguish between normal and abnormal scans. Scans were then re-reported both with, and without, the use of quantification. Number of equivocal reports and accuracy of reporting between the two types of reporting were compared.

RESULTS: Scan reporting using quantification led to a significant reduction in the number of equivocal reports with no significant change in reporting accuracy.

CONCLUSION: Automated quantification of DaTSCAN studies with BRASS and the use of numerical limits can decrease the number of equivocal reports without affecting report accuracy.

The diagnosis of idiopathic Parkinson’s disease (PD) and other Parkinson plus syndromes (PS) relies primarily on clinical assessment [1]. However in cases of diagnostic uncertainty, such as distinguishing PD from other causes of tremor or from Parkinsonian symptoms associated with neuroleptic exposure dopamine transporter, single photon emission computed tomography (SPECT) using 123I-FP-CIT (DaTSCAN) is useful and recommended [1, 2].

123I-FP-CIT (DaTSCAN) binds to pre-syxnaptic dopamine transporters in the striatum. If tracer uptake in either or both striata is reduced and increased background activity is seen, as shown in Figure 1, then the scan is reported as abnormal and there is a high probability that the patient has PD or a PS. If the uptake in the striatum is normal, as shown in Figure 2, then this makes a diagnosis of PD or a PS unlikely [3]. In some scans, it is difficult to determine if tracer uptake is normal or reduced and these scans are usually reported as equivocal. Figure 3 shows a scan with reduced uptake on the left, but this is not obviously abnormal and may be reported as equivocal. Most scans are clearly normal or abnormal, however some are more difficult to interpret and approximately 8% to 9% of DaTSCANS are reported as equivocal [4 and data from our department]. This has the adverse consequences of delayed definitive diagnosis, possible delay in treatment and may also result in a repeat scan causing increased radiation exposure and anxiety to the patient and increased cost to the healthcare provider. 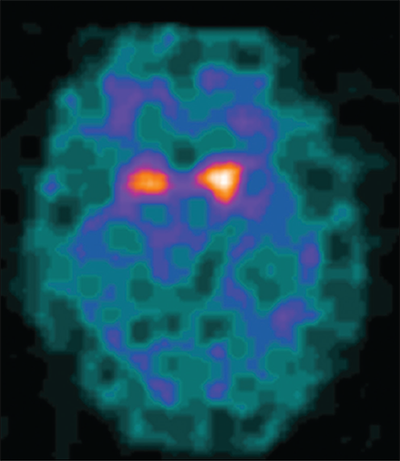 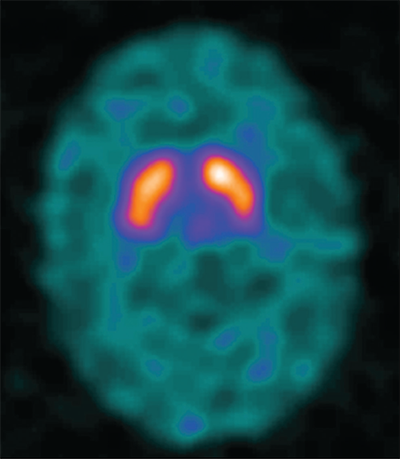 Figure 2. Normal DaTSCAN with good uptake in all of the striata bilaterally and normal background activity

Figure 3. A scan that might be reported as equivocal

A number of software packages exist that allow quantification of uptake in the striata [5] and different methods of quantification exist and have been compared [6]. Quantification has been shown to reduce interobserver variability in scan reporting [7] and to correlate with visual assessment [8], however to our knowledge no studies have specifically studied whether quantification can reduce the number of scans reported as equivocal. The aim of our study was to determine numerical limits from the results of quantification that could be used to help define scans that appear equivocal as normal or abnormal.

As post mortem diagnosis is rarely available and, according to recent recommendations, the diagnosis of PD is still predominantly based on the correct identification of its clinical features [1], we used clinical follow up as the gold standard for disease diagnosis. We chose a minimum of 18 months follow up between scan and final diagnosis, which was taken from the most recent correspondence letter in the clinical notes. Our department performed 611 scans between 2006 and 2009, of these 110 had follow up greater than 18 months. One scan was excluded from the study as correlative imaging showed that the patient had had a basal ganglia infarct which caused marked unilateral reduction in uptake, although the patient did not have a diagnosis consistent with PD or a PS. Mean follow-up period was 3.3 years and maximum was 6.7 years.

Each of the 109 scans was re-reported by three nuclear medicine consultants and two non-clinical members of the nuclear medicine team (physicists) with little previous experience of DaTSCAN interpretation. The non-clinical assessors were given a short tutorial on DaTSCAN reporting prior to the exercise. The scans were re-reported in two rounds, firstly without the results of quantification of uptake in the striata and secondly with the results of quantification. Each round of reporting was blinded to the results of previous reports, clinical details and the patient diagnosis and the order in which the scans were reported was changed. The assessors were asked to report the scans as normal, abnormal or equivocal.

Patients were given an intravenous injection of ~185 MBq of Ioflupane ([I-123] N-ω-fiuoropropyl-2β-carbomethoxy-3β-(4-iodophenyl) nortropane/DaTSCAN (GE Healthcare)). Images were taken 3–4 hours post-injection, using a Philips IRIX 3 headed camera, a 128 × 128 matrix, 30 seconds per step, 3 degrees per step, low energy high resolution collimator, 20% energy window and magnification × 2. Scans were processed on a Philips Odyssey, re-constructed iteratively (OS ML-EM-all) and post-filtered with a low pass Butterworth filter of order 4 and a cut-off frequency of 0.3 cycles/2 pixels.

The Brain Registration & Analysis Software Suite (BRASS™, HERMES Medical, Sweden) was used to quantify tracer uptake in the putamina and caudate nuclei [9]. This software has been shown to provide consistent results independent of operator variability [10]. BRASS fits the patient data to a pre-existing template containing a number of volumes of interest (VOIs) and calculates the caudate and putamen uptake ratios (CUR and PUR respectively),

where C, P and B are the average counts per voxel in the caudate nucleus, putamen and background regions, respectively. The background region is a reference volume within the occipital lobe.

The PUR and CUR in the striatum bilaterally in normal and abnormal scans were compared. Minimum CUR and PUR (CURmin, PURmin) were determined above which all normal scans lay. If the lowest value for the CUR or PUR, on either side of a scan fell below CURmin or PURmin then the scan would be defined as abnormal. The converse was not true: if the lowest PUR or CUR fell above CURmin or PURmin, the scan could be normal or abnormal. The number of scans correctly classified as abnormal with use of either CURmin or PURmin was compared and the parameter that detected the most number of abnormal scans was used in the reporting exercise.

Comparison of reporting with and without quantification

For each round of reporting the number of equivocal reports and accuracy of reporting was recorded and compared. Accuracy was calculated as the percentage of scans reported as normal or abnormal which agreed with clinical follow up (scans reported as equivocal were excluded from the calculation). Accuracy was calculated so that if the use of quantification resulted in less scans being reported as equivocal, then we could determine if the decision about whether the scan was normal or abnormal was actually correct. Because CURmin and PURmin were determined, and then used, on the same population of scans it was not appropriate to compare accuracy of reporting between the two rounds as an independent result.

Figure 4 shows the uptake ratios in the putamen and caudate nucleus in normal and abnormal scans. The CURmin or PURmin for which all normal scans were equal to or lay above was 1.43 and 1.41 respectively. Rather than use 1.42 and 1.40 as the cut off for which scans lying below these values are classified as abnormal, we used the values of 1.37 and 1.35 to give a margin of error. 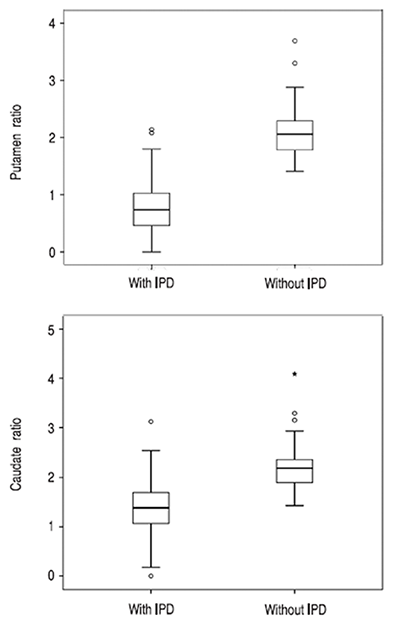 Figure 4. The uptake ratios for the putamina (A) and the caudate nuclei (B) grouped into abnormal and normal scans as determined by clinical follow-up

The mean caudate uptake ratio in the group with PD or PS is approximately 61% of that measured in the non PD/PS group. For the putamina this value is 37%. This greater reduction in the mean signal in the putamen is due to neuronal degeneration affecting this part of the striatum first [11].

Table 1 shows the number of abnormal scans identified by CURmin and PURmin CURmin did not classify any scans as abnormal that had not already been classified as abnormal with the use of PURmin. Therefore PURmin only was used in the reporting exercise. Tables 2A and 2B show the results of the two rounds of reporting.

Table 1. Percentage of abnormal scans identified by CURmin or PURmin

Table 2. Number of studies reported as equivocal (A) and accuracy (B) (defined in the text) of each assessor, with and without quantification

Our study demonstrates that the use of automated quantification of DaTSCAN studies and the use of numerical limits that define normal scans reduces the number of equivocal reports without reducing reporting accuracy. This is beneficial as equivocal DaTSCAN studies account for approximately 8% to 9% [4, data from our department] of cases and the most likely consequences: delayed diagnosis and rescan have important repercussions on patient outcomes.

To our knowledge, our study is the first to investigate the added value of semi-quantification in decreasing the number of equivocal results. Other published studies on semi-quantification have focused on its use in intra and inter observer variability [4, 7] and its association with visual assessment and clinical parameters [8].

Our study also has implications for the use of non-clinical reporters of DaTSCAN studies. The non-clinical reporters (physicists) had similar reporting accuracy as the clinicians however the reduction in the number of equivocal reports with the use of quantification was greatest for the non-clinicians. This suggests that non-medical staff can be appropriately trained to accurately report DaTSCAN studies and that quantification would be useful for this group.

We identified three important limitations to this study. The first is that the parameters we used (CURmin and PURmin) were defined and then tested on the same population of scans. Although this does not affect the result that the use of quantification reduces the number of scans that reporters report as equivocal, it did mean that we could not test reporting accuracy as an independent variable. To address this, we intend to retest the parameters on a new population of scans which were not originally used to define the parameters.

A second limitation is that the gold standard we used for diagnosis (clinical follow up) may have been influenced by the original report of the DaTSCAN. However the mean follow-up in our patient population was 39 months and the shortest follow-up was 18 months. We would expect an incorrect diagnosis to become increasingly apparent and questioned during such a long follow-up.

Automated quantification of tracer uptake in the striata and use of PUR reduces the number of scans reported as equivocal without affecting reporting accuracy.