Coverage from the EANM 2013 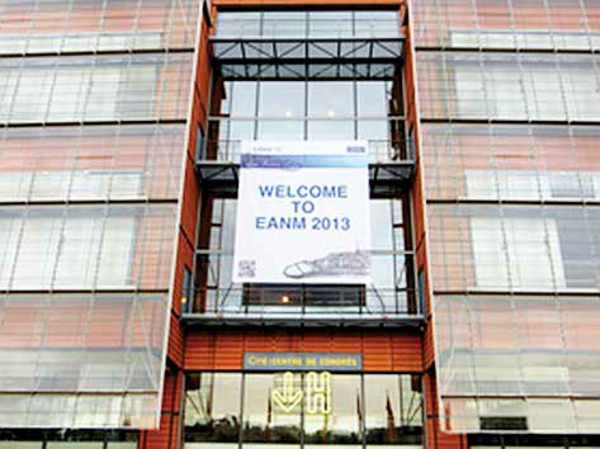 On 19th-23rd October 2013 the annual congress of the European Association of Nuclear Medicine took place. This year specialists from all over Europe as well as guests from Asia and US visited Lyon, France. The event held at one of the biggest congress centers in Europe started on Saturday evening with an opening ceremony and welcome reception and lasted for four days. During the congress over 700 studies were presented, as well as over 1000 posters, including 148 featured at poster-walk sessions.

Nuclear medicine applications in bone metastasis is a well known topic regarding Beta particle emitters e.g. Strontium 89. However, the usefulness of Alfa emitters is not well recognized. The presentations concentrated on Radium 223 effect on treating patients with disseminated cancers, mainly breast and prostate cancer. While the first one remains in the clinical studies phase, the latter has been approved by FDA.

The ALSYMPCA study compared Radium223 vs placebo in 921 prostate cancer patients divided in two groups (2:1). The results show the survival longer by 3,6 months in the Radium group and time to skeletal related event longer by 5,8 months [1].

Many cardiologic sessions were held. Session focused on myocardial viability presented the usefulness of SPECT and PET in recognizing viable myocardium, thus selecting patients more likely to benefit from invasive therapy. The main conclusion is that PET remains the most sensitive and specific tool concerning viability, however MRI may have an advantage in a group of patients with subendocardial infarction [2–5].

Other sessions highlighted the development of CZT cameras which allow us to significantly reduce the radiation dose and acquisition time, while improving the resolution of images. [6] Authors also presented TID (Transient Ischemic Dilation) and global wall thickening as independent risk factors of myocardial incident [7, 8].

Most studies focused on applications of PET-CT in monitoring cancer. A study on 135 patients showed benefits of using PET-CT in radiotherapy planning in stage 1 and 2 Hodgkin Lymphoma patients [9].

A retrospective study of 1000 cases of lymphoma pointed out the need of radiation dose reduction during follow-up, especially when young patients undergo the treatment [10]. Presentations about ovarian cancer started the discussion in which the shortcomings of CA125 marker and CT where pointed out in context of PET-CT advantages [11, 12].

It is impossible to write about all of the sessions. During the whole congress, apart from scientific presentations, visitors could attend diagnostic and therapeutic equipment exhibitions. The event ended with highlights lecture and awards and closing ceremonies. The next congress will be held in October 2014 in Goeteborg, Sweden.