Bone scintigraphy is widely considered as an important technique able to investigate various pathological conditions of the skeletal system and its use is embedded in national and international guidelines. Many unexpected extraosseous uptakes have been reported in literature: although several causes can be addressed, still the majority of cases do not recognize a clear pathological entity [1].

This phenomenon can be due to a huge variety of pathophysiological mechanisms, such as an alteration in calcium metabolism, as it often happens in many systemic diseases, extracellular fluid expansion and enhanced regional vascularity and permeability [2, 3]; lung has been reported to be the most frequently site, followed by myocardium, chest wall. spleen, lymph nodes, kidney, stomach, retroperitoneum, adrenal gland, and pelvic cavity [4–9].

We present here three cases of unexpected 99mTc-oxidronate (HDP) uptakes in patients undergoing bone scan for staging purposes; subsequently, we perform a review of the existing literature about extraosseous uptakes.

A 75 year old man came to our observation in order to perform a bone scan for staging purposes. The patient has been diagnosed with prostate cancer two months before. Three hours after admi­nistering 850 MBq 99mTc-HDP, we performed a total body scan. No clear metastatic lesions could be found, but there was an evidence of an unexpected myocardial uptake (Fig. 1). 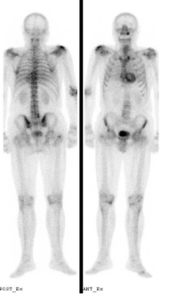 Figure 1. Bone scan (anterior and posterior view) in the patient described in case 1. There is an evidence of a myocardial uptake

No possible underlying causes could be detected, and the patient underwent a second bone scan two days later. The myocardial uptake was still present and an intense uptake involving the left upper extremity also could be detected (Fig. 2), not present on the first examination. The patient denied physical exercise the day before examination as well as receiving intravenous or intra-arterial drugs. Standard routine blood test were unremarkable, while D-dimer was not available. An extravenous administration was excluded, since the injection site was on the right arm. Likewise, a possible contamination was excluded. The possible cause of these extraosseous uptakes remained unexplained. 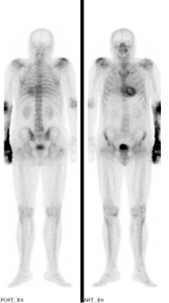 Figure 2. The same patient of Figure 1 two days later: the myocardial uptake is still present, while there is a new large uptake on the left upper extremity

A 65 year-old woman came to our observation for staging purposes after being diagnosed with breast cancer. Four hours after administering 780 MBq 99mTc-HDP, a total body bone scan was performed. The patient had no history of other diseases and she was on well-being at the observation. No symptoms were reported.

There was an evidence of small uptakes on the pelvis and the lumbar spine, probably related to arthrosis, and an extraosseous myocardial uptake (Fig. 3). The patient had no history of cardiac diseases, but she was later investigated and diagnosed with amyloidosis. 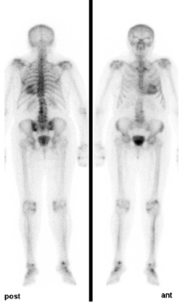 Figure 3. Bone scan (anterior and posterior view) in the patient described in case 2. There is an evidence of a myocardial uptake

A 78 year-old woman came to our observation because of suspicion of a metastatic lesion located on the right knee. Three hours after administering 568 MBq 99mTc-HDP, the patient underwent a total body bone scan, revealing an intense uptake on the right knee. A myocardial uptake was also evident (Fig. 4). The clinical history was investigated, and we found that the patient has been diagnosed with Waldenstrom disease two years before, and suffered from IgM-related amyloidosis. The patient was not on specific therapy at the time of our observation. Right knee pain was the only symptom reported by the patient. 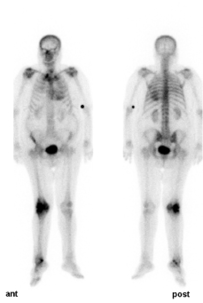 Figure 4. Bone scan (anterior and posterior view) in the patient described in case 3. There is an evidence of a myocardial uptake. The patient was later diagnosed with IgM-related amyloidosis

Extraosseous uptakes of 99mTc-labelled phosphates have been reported in many papers, although they represent a relatively rare clinical entity (Table 1).

Table 1. Conditions associated to extraosseous 99mTc-phosphates uptake during a bone scan and the most frequent localizations

Different organs can present an abnormal uptake and this finding is often accompanied by systemic diseases, although the underlying cause remains unknown in most cases. We could demonstrate a precise pathophysiological mechanism only in the patient of case no. 2, diagnosed with amyloidosis and in patient of case no. 3, who was diagnosed with Waldenstrom macroglobulinemia.

An extraosseous uptake has been described before [12] in a patient affected by Waldenstrom macroglobulinemia, even if in this case only hepatic and spleen involvement was present, while our description is the first case of a myocardial uptake related to such a condition.

In our first case, no apparent explanation could be hypothesized for the uptake involving the left upper extremity. Phosphates uptakes in soft tissues have also been reported and many causes have been described [13]; anyway, none of them were diagnosed in our patient and, moreover, there is not a clear explanation why this finding was not present on the first body scan, performed only two days before.

As previously mentioned, extravenous administration could not be a cause, since the site of injection was the right arm. For the same reason, contamination or intra-arterial injection, which was reported to be another possible cause of soft tissue uptake [14], was excluded. The preparation of the radiopharmaceutical had no issues as well.

Also physical exercise could be suspected: some cases have been reported in literature [15–20] but the pattern of uptake which is confined to the left forearm makes this unlikely. Cold exposure was suspected as well, but could not be properly confirmed.

To our knowledge, no other reports can be found in literature, comparing two body scans and demonstrating the onset of an uptake on an extremity in a so short time interval.

Other cases of myocardial uptake have been described in literature.

Al-Nahhas et al. described 19 myocardial uptakes (17 males, one female) and observed that most of the male patients with increased myocardial uptake had prostatic carcinoma and were over 80 years of age [21]. Wadhwa et al reported HDP uptake in cardiac amyloidosis in a background of tuberculosis, prostate cancer and coronary artery disease in an 86 year old patient. [22].

Chadrawar et al. presented another case of myocardial uptake without a clear cause and reviewed the literature concerning this phenomenon [23]. Jones et al reported on prominent myocardial uptake in 10 elderly men on HDP bone scan due to obscure benign etiology but presumably with atherosclerosis as contributing factor [24].

Other causes described in literature are amyloidosis [25–27], hypercalcemia [28, 29], metastases [30–32], vasculitis [33], nephrocalcinosis [21]; anyway, in many cases no correlations with other pathologies can be demonstrated [34].

Soft tissues are other potential sites for extraosseous uptake and have been reported to be correlated to conditions like amyloidosis [35], alterations in calcium metabolism [36, 37], metastases [38] and multiple myeloma [39–41].

Although calcifications in various organs could also be consequent to multiple small infarcts of extremely small size [78–80], definite pathologic findings which could demonstrate the presence of ischemia can be hardly found in the cases reported in literature [81].

There is an evidence that calcium phosphate molar ratio, crystalline surface area, and presence of other metallic ions are factors that determine the reactivity of diphosphonates to a calcium deposition [75, 82]; as an example, high concentrations of iron in soft tissues produce extraskeletal Tc-99m MDP uptake [60, 83].

The most probable mechanism is an impairment of calcium metabolism, as it can be often observed in systemic diseases and in some paraneoplastic syndromes; normally, pure and amorphous calcium phosphate accumulations with a low molar ratio and a large surface area can be found in sites of 99mTc-labelled phosphates, causing an avid diphosphonate adsorption similar to that of mature hydroxyapatite [71].

Extraosseous uptake of 99mTc-labelled phosphates is a relatively rare finding, which is however increasing in clinical reports.

Large studies investigating the precise pathophysiologic mechanisms related to this phenomenon would be desirable, even if the huge variability of possible conditions limits this possibility.