Objective: PET imaging is becoming increasingly universal, and therefore increased liver uptake is frequently encountered. The purpose of this article is to describe and illustrate the various morphological patterns of increased metabolic activity within the liver with an emphasis on the diagnostic pitfalls and potential limitations.

Conclusion: Knowing the pitfalls of PET imaging, correlation with clinical background and findings from other imaging modalities are all important in the correct interpretation of increased hepatic activity on PET imaging.

Positron emission tomography (PET) has emerged as an increasingly important functional diagnostic tool in a wide spectrum of conditions in recent years. By far the most extensive use of PET/CT imaging to date has been in the diagnosis, staging and monitoring of malignancies. As liver is the one of the commonest sites of metastasis for tumours arising from the gastrointestinal tract, lung, breast, pancreas and melanoma etc. [1, 2] and that the presence of hepatic metastasis often significantly alters treatment plan, liver imaging presents a common challenge in oncological evaluation by PET. In the contrary, other imaging modalities such as ultrasound (US), dynamic CT or contrast-enhancement MRI remain the mainstays for diagnosis of primary liver tumours such as hepatocellular carcinomas (HCC). Nevertheless, occasion arises where whole-body PET/CT is employed as supplementary tool in the characterisation of known primary liver lesions or for various inflammatory/infective conditions. Recognizing the diffe­rent morphological patterns of increased liver uptake is therefore imperative.

18-fluoro-2-deoxyglucose (FDG), an analogue of glucose that allows evaluation of glucose metabolism, is the most commonly used PET tracer. FDG enters cells by glucose transporters and is intracellularly phosphorylated by hexokinase into FDG-6-phosphate. However unlike glucose, it cannot be further metabolised and therefore becomes “trapped” within the cell in a manner proportional to the glycolytic rate. The presence of facilitated glucose transpor­ters, especially type 1 (GLUT1) and hexokinase II, in many forms of solid malignancies and the consequent accelerated glycolytic rate is exploited in FDG-PET imaging.

In some types of malignancy however, this alteration in tumour kinetics is not seen. HCCs for instance, may exhibit a higher glucose-6-phosphatase activity to phosphorylation kinase acti­vity ratio, thereby resulting in a low glucose metabolism and FDG uptake — a fact that is well recognized for the well-differentiated and lower grade tumours [3]. In this regard, Carbon-11 acetate serves as an important complementary metabolic agent and will be discussed in more detail later.

In this review article, we aimed to describe and illustrate the different morphological patterns of hepatic uptake that may be seen with these two PET tracers.

Before discussing the various patterns of increased hepatic uptake, it is useful to first consider the potential diagnostic pitfalls in PET imaging.

Apart from the general technology-specific pitfalls like misregistration, attenuation correction and truncation artefacts etc. [4], there are imaging issues that specifically relate to the liver. Normal liver, like the spleen, is a site of diffuse mild to moderate FDG uptake [5]. The usual appearance of liver parenchyma is that of a mildly intense, uniformly mottled appearance. This makes any increased uptake related to a focal lesion more difficult to be discerned from the background physiological activity. In an attempt to increase conspicuity and detection rate of liver metastasis, dual-time-point FDG-PET imaging with delayed acquisition at 120mins has been used by some centres with success. It has been shown to be more sensitive in detecting liver metastases, revealing new lesions in 17% of patients when compared with standard imaging alone [6]. The improved performance is believed to be due to altered tumour vascularity and better clearance of blood-pool activity with time (Fig. 1) [7]. Another technique that has been proposed to improve image quality is the lengthening of image acquisition time (Fig. 2) [8]. 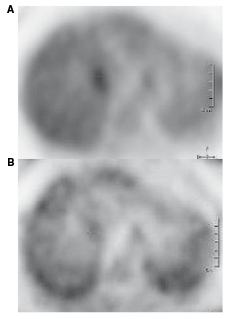 Size is another factor that will affect the sensitivity of PET imaging. Studies have indicated that PET is most accurate for detection of hepatic metastases greater than 1 cm in diameter, but becomes limited when lesions are smaller than 1 cm [9, 10].

Age may also have a significant and positive impact on both maximum and mean standardized uptake values of the liver, as suggested by Lin et al. [11].

Furthermore, hepatic steatosis may potentially alter hepatic metabolic activity on PET imaging although the difference is considered too small to be significant [12].

Solitary uptake in the liver is non-specific in PET imaging (Table 1) [13]. It can be due to infection (Fig. 3) or other inflammatory conditions like sarcoidosis [14], histiocytosis [15] and pseudotumour [16]. FDG is well known to accumulate in inflammatory cells such as lymphocytes, neutrophils and macrophages in various inflammatory or infectious conditions due to elevated glucose requirements [17]. Hence one should be aware of potential false positive results in such conditions.

Figure 3. 76-year-old woman presented with fever of unknown origin. A. Ultrasound shows a hypoechogenic lesion in the left lobe of the liver (arrow); B. Axial post contrast CT demonstrates a heterogeneous enhancing lesion (arrow); C. Patient refused biopsy and PET/CT was offered. Axial image of the FDG PET shows the corresponding lesion with increased metabolic activity SUVmax 9.3 (arrow). The patient was treated with antibiotics and follow-up CT showed complete resolution of the lesion confirming an abscess

Primary liver tumours, either benign, malignant or metastastic (Fig. 4) are frequently encountered in oncological imaging. This emphasises the need for other imaging modalities in the evaluation of liver masses [18]. Benign liver tumours like haemangioma, focal nodular hyperplasia (FNH), and HCC have been shown to generally take up FDG at a similar rate as normal liver tissue [19]. Nevertheless, there have been case reports of increased uptake by FNH [20] and hepatocellular adenoma [21]. For malignant primary liver tumours in particular HCC, the sensitivity of FDG-PET is less than remarkable — a reported range of 50–65% [22, 23]. As for cholangiocarcinoma, the sensitivity of FDG PET is high (> 90%) for the intrahepatic subtype and less so for the extrahepatic subtype (about 60%) [24]. Uncommon liver malignancies like lymphoma, both primary [25] and secondary [26], and angiosarcoma [27] have also been reported to show increased FDG uptakes. 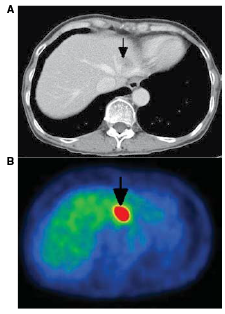 Figure 4. 69-year-old woman with carcinoma of rectum. A. Axial contrast CT shows a hypoenhancing lesion in segment 2 of the liver (arrow) with corresponding (B) FGD PET showing a lesion with increased metabolic activity lesion (SUVmax 13) (arrow). Histopathology confirmed liver metastasis from carcinoma of rectum after segmentectomy

With regards to liver metastases, several types are known to have avid FDG uptake and thus FDG-PET generally has a good detection rate [28]. Kinkel et al. [29] found that FDG-PET is the most sensitive (90%) noninvasive imaging modality for the diagnosis of hepatic metastases from colorectal, gastric and oesophageal cancers. A recent meta-analysis demonstrated the sensitivities of CT, MR and FDG-PET for detecting hepatic metastases from colorectal carcinoma to be 83.6%, 88.2%, and 94.1%, respectively [30]. But if lesions are smaller than 1 cm in diameter, the sensitivity may be lower as previously explained [31, 32].

Ring-like FDG uptake is also non-specific but in the context of oncological imaging, it may indicate mucin-producing tumours like cholangiocarcinoma (Fig. 5) or metastasis from adenocarcinoma [33]. Mucin-producing neoplasm such as mucinous colorectal carcinoma contains abundant mucin and often exhibit significantly lower peak standardized uptake values. This is believed to be secondary to a lower glucose metabolic rate and cellularity [34]. Presence of necrosis is another reason for ring-like uptake (Fig. 6). Intra-acinar necrosis may be seen in colorectal carcinoma [35] and can give rise to significant decrease in FDG uptake. Last but not least, ring-like FDG uptake within the liver is also seen in inflammatory conditions such as large liver abscess with liquefaction centre [13], or acute cholecystitis [36]. 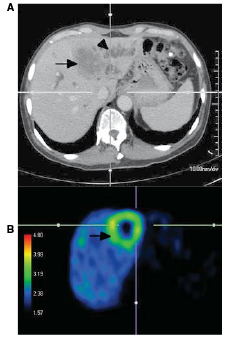 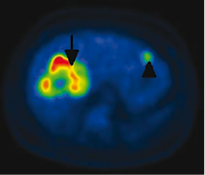 Figure 6. 72-year-old man with carcinoma of colon. The lesion is in right lobe of the liver (arrow) with increased metabolic activity predominantly in the periphery (SUVmax 12.8) on axial FDG PET. A smaller increased metabolic activity focus (arrow head) is seen in the lateral segment of the liver (SUVmax 5.3). Biopsy confirmed liver metastasis from carcinoma of colon with central necrosis

In oncological imaging, multiple sites of focally increased FDG concentration in the background of relatively lower normal hepatocyte uptake are generally regarded as the hallmark of metastatic liver involvement from a known primary tumour (Figs. 7 and 8). However, the differential diagnosis of liver uptake (Table 1) is still applicable and that correlation with clinical setting and other imaging findings is essential for the correct diagnosis. 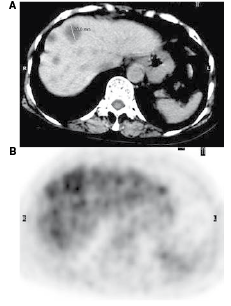 Figure 7. 79-year-old woman with carcinoma of colon. A. Axial non-contrast CT shows multiple hepatic hypoattenuated lesions with sized up to 2 cm; B. Axial FDG PET of the liver shows multiple increased metabolic activity with highest SUVmax 5.3 for the corresponding biggest lesion on CT. Features are compatible with multiple liver metastases. The patient succumbed one month after the PET/CT due to liver failure

“Hepatic superscan” is an uncommon but interesting finding in FDG-PET imaging. Analogous to the superscan seen in conventional skeletal scintrigraphy, it describes the appearance of intense diffuse hepatic tracer uptake, often coupled with surprisingly low brain and cardiac FDG uptake. This appearance can be seen in diffuse extensive involvement by malignancy like hepatic lymphoma [37], HCC or metastasis [38]. Similar diffuse increase in liver FDG uptake from diffuse involvement by tuberculosis has been described as “hot liver” (Fig. 9) [39].

As discussed above, the role of FDG-PET in the detection and diagnosis of HCC is limited. Elevated FDG uptake in malignant tumours largely depends on the presence of facilitated glucose transporters and glycolytic enzyme hexokinase II but this alteration in kinetic pathways does not occur in all forms of solid malignancy. HCC is one of such examples. As mentioned previously, many HCCs particularly those that are well-differentiated and lower grade exhibit a lower FDG avidity and may escape detection on FDG-PET imaging (Fig. 10). It is therefore not surprising that the general reported false-negative rate using FDG-PET in the imaging of primary HCC only approaches 50–65% [40, 41]. 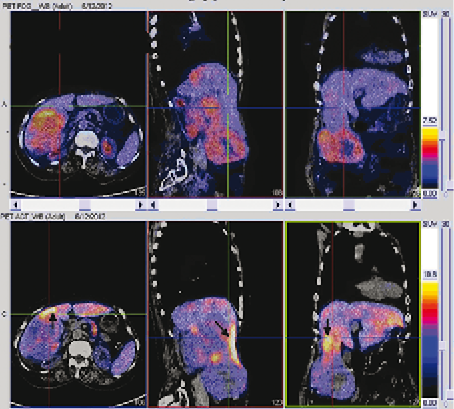 The use of Carbon-11 acetate as dual tracer is now well established in the detection of HCC. The exact uptake mechanism of Carbon 11 is not known, but studies suggest that it is incorporated into the lipid pool in cancer tissue with low oxidative metabolism and high lipid synthesis [42]. An early study demonstrated that Carbon-11 acetate has sensitivity for detection of HCC of 87.3% while that of 18F-FDG was 47.3%. When both tracers were used, they appeared to be complementary, giving a specificity of 100% [43]. As a single agent, Carbon-11 acetate appears to be more sensitive in detecting primary HCC that 18-F FDG (75.4% vs. 60.9%) although the converse is true in the case of metastatic HCC (77% vs. 85.7%) [44]. Carbon-11 acetate is therefore considered by many as complementary to 18-F FDG in HCC imaging. 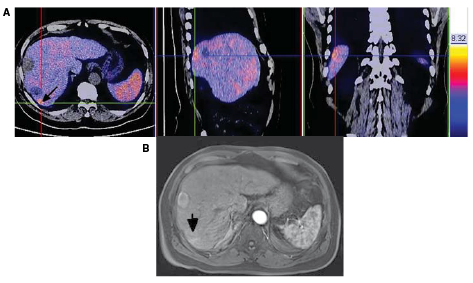 Figure 12. 66-year-old man with history of HCCs and RFA treatment at segment 7 and 8. A. Dual-tracer multi-planar images from fused 11C-acetate PET/CT shows a small focal increased metabolic activity lesion (SUVmax 7.7) (arrow) at segment 7 of the liver, posterior to the previous RFA site; B. Axial post-contrast MRI image of the liver shows a wedge shape enhancing area (arrow) corresponding to the Carbon 11 acetate avid area (due to the present of arteroportal venous shunt). Follow-up MRI twelve months later showed no evidence of HCC

Abnormal liver uptake in PET imaging is a common finding. Different patterns of liver uptake have been described and none of them are specific to any underlying pathology. Knowing the pitfalls of PET imaging, correlation with clinical background and findings from other imaging modalities is the key to correctly interpreting altered hepatic activity. In doubtful cases, histological confirmation may still be required.