Presented paper describes the results of the individual doses measurements for ionizing radiation, carried out by the Laboratory of Individual and Environmental Doses Monitoring (PDIS) of the Central Laboratory for Radiological Protection in Warsaw (CLOR) for the medical staff employees in several nuclear medicine (NM) departments across Poland. In total there are 48 NM departments in operation in Poland [1] (consultation in Nuclear Atomic Agency). Presented results were collected over the period from January 2011 to December 2011 at eight NM departments located in Krakow, Warszawa (two departments), Rzeszow (two departments), Opole, Przemysl and Gorzow Wielkopolski. For radiation monitoring three kinds of thermoluminescence dosimeters (TLD) were used. The first TLD h collected information about whole body (C) effective dose, the second dosimeter was mounted in the ring (P) meanwhile the third on the wrist (N) of the tested person. Reading of TLDs was performed in quarterly periods. As a good approximation of effective and equivalent dose assessment of operational quantities both the individual dose equivalent Hp(10) and the Hp(0.07) were used. The analysis of the data was performed using two methods The first method was based on quarterly estimations of Hp(10)q and Hp(0.07)q while the second measured cumulative annual doses Hp(10)a and Hp(0.07)a. The highest recorded value of the radiation dose for quarterly assessments reached 24.4 mSv and was recorded by the wrist type dosimeter worn by a worker involved in source preparation procedure. The mean values of Hp(10)q (C type dosimeter) and Hp(0.07)q (P and N type dosimeter) for all monitored departments were respectively 0.46 mSv and 3.29 mSv. There was a strong correlation between the performed job and the value of the received dose. The highest doses always were absorbed by those staff members who were involved in sources preparation. The highest annual cumulative dose for a particular worker in the considered time period was 4.22 mSv for Hp(10)a and 67.7 mSv for Hp(0.07)a. In 2011 no case of exceeding the allowed dose limits was noted.

Radioactive sources used in nuclear medicine departments always have an open character. Because of that all NM employees involved in procedures that require contact with radioactive material (such as o preparation of radiopharmaceuticals, patients’ injections, measurement of radio-markers positioned inside of patient body and all other contacts with treated or diagnosed patients) belong to “A” category of workers. For A category the quantities considered by the appropriate limits are as follows: the effective dose for the whole body exposure, and the equivalent dose for exposure of certain tissues or organs, as indicated by ICRP Publication 60 [3]. Because of effective dose and equivalent dose are immeasurable directly the operational quantities as Hp(10) for E and Hp(0.07) for H are used as a good approximation.

Doses monitoring service in CLOR has been established in 1956 and presently it works as the Laboratory of Individual and Environmental Doses. In December 2003 the Laboratory was approved by the Polish Centre for Accreditation and was granted Accreditation Certificate (Nr AB 450) which was a necessary condition to continue providing radiation monitoring service in Poland. In 1999 RADOS TLD system including Dosacus reader, 4000 LiF:Mg,Ti,S thermoluminescence pellets and 4000 whole body dosimeters were put into operation.

In nuclear medicine procedures the following radionuclides are most often used: 11C, 18F, 111In, 123I, 125I, 131I, 15O, 32P, 99mTc and 90Y. All of them emit gamma radiation with energies ranging from 25 keV to 511 keV. The range of used activities is wide as they depend on the applied procedures. They typically vary from the tenths of MBq in case of thyroid function study and reach even a few GBq in carcinoma treatment cases.

For each individual dose monitoring procedure the TLD method based on MCP-N (LiF:Mg,Cu,P) thermoluminescent material was used. The material employed in TLD dosimeter is characterized by high sensitivity [4] for radiation detection and very low detection limit which is 60 nGy for air kerma [5].

According to the quality system implemented in the Laboratory read-out, dose calculation and calibration processes are performed accordingly to the accredited internal procedures [6]. Additionally to prove suitability of the used methods Laboratory periodically participates in international comparisons.

Results of monitoring are held in SQL database which provides internet access to the mentioned data for the monitored institution and for administrator of the system in CLOR. For every monitored nuclear medicine department a special information card is maintained. The card includes information regarding the types and activities of radioactive sources that are used in this particular department, as well as the character of work for all employed persons. The detection limit of CLOR monitoring systems is 0.1 mSv and the standard monitoring period is three months.

The results were additionally referenced to the value of dose received from natural radiation and values of average annual doses in other sectors as was reported before [7] .

In total 525 quarterly readouts were made in eight nuclear medicine departments controlled by CLOR in the period from January 2011 up to the end of December 2011. Almost 67% of them were related to Hp(10) estimation. All the analysed dosimeters were exposed for ionizing radiation during routine activities performed by persons employed in NM departments. Any case where the allowed dose limits was exceeded was recorded.

Based on the data taken from the information cards established for individual departments, a close correlation between the received doses and job character was observed. During each monitoring period the highest doses were received by the technicians responsible for preparation of radioactive sources or its application to the patient. Our investigation showed that the received doses remained in good agreement with the level of radioiodine and technetium deposition in the thyroid as it was shown in before investigation [8]. Table 2 presents the maximum and the mean values for quarterly and annual doses assessment.

Table 2. The maximum and the mean values of quarterly and annual doses received by the employees performing radioactive procedures in the eight NM departments analysed in this study

The maximum quarterly dose Hp(10)q observed during the mentioned period was equal to 1.37 mSv. As is presented in Figure 1, more than 98% of Hp(10)q of the obtained dose estimations resulted in the Hp(10) values lower than1mSv while the most frequently obtained doses balanced around 0.25 mSv. The mean value of Hp(10)q in the considered period and all departments was 0.46 mSv. 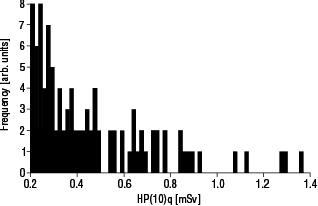 For Hp(0.07)q maximum recorded dose have been observed for the N type dosimeter and it amounted to 24.4 mSv. Though there was a slight increase of frequency for estimation of dose around 12 mSv, see Figure 2 more than 72% of Hp(0.07)q results were below 1 mSv. The mean value for Hp(0.07)q estimation was 3.29 mSv. 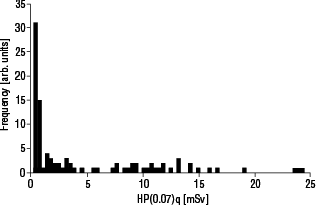 Based on the data collected in 2011, our study has found that the maximum annual personal dose Hp(10)a in the eight analysed departments was equal to 4.22 mSv. Figure 3 presents the results of annual cumulative doses Hp(10)a which show that 57% of doses remained below 1 mSv. The mean Hp(10)a value was 1.12 mSv. These values can be compared to the mean annual dose received by an individual from naturally occurred radiation that is estimated to be equal in Poland to 2.9 mSv [9]. 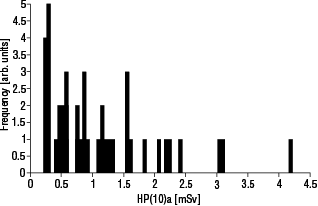 The maximum values of Hp(0.07)a estimation was 67.7 mSv that was about one tents of the dose limit for type A workers for extremities which amount to 500 mSv. The hands are the most exposed part of the body during nuclear medicine procedures so almost 66% of Hp(0.07)a estimation values were above 1 mSv, see Figure 4. The mean value for Hp(0.07)a was 11.9 mSv. In the considered period of time any case exceeding currently applicable dose limits have been noted. 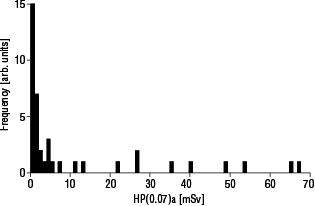 Basing on before investigation [7] the results can be compared with annual average doses in other sectors where the radioactive sources are used (see Table 3).

The TLD-based individual doses monitoring method, especially monitoring based on the use of extremities dosimeters, is a mo­dern technique fully applicable in nuclear medicine departments. Individual doses monitoring performed for eight NMD showed that personnel in that kind of medical institution should be carefully monitored especially by using extremities dosimeters because of high risk of exposure of theirs hands during manipulations of radioactive sources. In addition, staff should be under permanent dose control to provide information about situations exceeding allowed dose limits. Special attention should be paid to properly established dose constraints. For example, as a good practice that should be implemented, would be dividing some of the most hazardous activities (such as preparation of high activity sources) to as many workers as possible.