False-positive findings with myocardial perfusion imaging (MPI) have frequently been identified in the presence of left bundle branch block (LBBB) and tend to lower the accuracy of MPI in individuals with normal coronary angiographs. Pharmacologic stress is recognized as the preferred method for MPI in patients with LBBB. In contrast, very few studies have evaluated the effect of right bundle branch block (RBBB) on MPI, and there is no consensus regarding the selection of pharmacologic versus exercise stress during MPI for the RBBB patient. In this study, we present a 45-year-old man with RBBB, who has a normal coronary artery angiography, but who showed abnormal myocardial perfusion with exercise MPI, and normal perfusion on dipyridamole MPI. The aim of the study is to stimulate awareness that the stress method selected for patients with RBBB can potentially interfere with the accuracy of the data.

It has been reported that conduction abnormality may be related to ischemic heart disease (IHD) and therefore detection of coronary artery disease (CAD) in these patients is essential [1]. Since in left bundle branch block (LBBB) patients the exercise stress test is inconclusive, the use of a non-invasive modality, such as myocardial perfusion imaging (MPI), is applied for screening purposes [2]. However, false-positive findings with myocardial perfusion imaging (MPI) have been frequently noted in the presence of left bundle branch block (LBBB) and tend to lower the accuracy of MPI in individuals with normal coronary angiographs [3]. Pharmacologic stress is therefore recognized as the preferred method for MPI in patients with LBBB [4]. In contrast, very few studies have evaluated the effect of right bundle branch block (RBBB) on MPI, and there is no consensus concerning the selection of a pharmacologic versus an exercise stress method during MPI for the RBBB patient [5]. We present a 45-year-old man with RBBB and with a normal coronary artery angiograph, who showed abnormal myocardial perfusion with exercise MPI, and normal perfusion on dipyridamole MPI, with the aim of stimulating awareness that the stress method selected for these patients can potentially interfere with the accuracy of the data.

A 45-year-old man with an atypical chest pain was referred to the nuclear medicine department for assessment for possible coronary artery disease. Physical examination revealed his blood pressure (BP) to be 125/75 mm Hg, his heart rate (HR) 72/min, and his jugular vein and carotids normal. His echocardiogram was normal and his ejection fraction was estimated at 55–60%. The patient filled out a questionnaire that included demographics and risk factors for CAD. He did not have a previous history of admissions for cardiac problems. His electrocardiogram (ECG) indicated right bundle bunch block and a previous ECG, 8 years earlier, also showed the same pattern. He mentioned that his brother had the same ECG pattern. For the MPI, the patient underwent a 2-day technetium 99m sestamibi SPECT exercise protocol. He exercised on a treadmill under a standard Bruce protocol. At the peak heart rate achieved (more than 85% of the age-predicted maximum heart rate), 740 MBq of 99mTc-MIBI was injected as a compact bolus. Imaging was performed 15–30 minutes after exercise in supine position. The resting single photon emission computed tomography (SPECT) was performed 90 minutes after a 740 MBq 99mTc-MIBI injection on the following day. The exercise MPI images revealed ischemia in the anteroapical and mid to basal portion of the lateral and inferolateral walls (Figure 1). After that, the patient underwent left cardiac catheterization, which revealed normal coronary arteries. Again, three months later, he presented to the emergency room with a typical chest pain. Once again, he was referred to our nuclear medicine department for MPI. At first, we performed the technetium 99m sestamibi gated SPECT exercise protocol as mentioned above but in prone position. It showed ischemia in the anteroapical wall (Figure 2). The semi-quantitative analysis of stress gated SPECT images showed transient ischemic dilation (TID) of 0.82; lung heart ratio (LHR) of 0.36; sum motion score (SMS) of 0; sum thickening score (STS) of 0; sum stress score (SSS) of 4; sum rest score (SRS) of 0; sum difference score (SDS) of 4; end systolic volume (ESV) of 16 ml: end diastolic volume (EDV) of 110 ml and ejection fraction (EF) of 77%. On the resting gated MPI, the EDV was 110 ml; the ESV 43 ml and the EF 61%. Due to possible false-positive results from the exercise gated MPI, we repeated the study with a dipyridamole technetium 99m-sestamibi gated SPECT protocol which showed normal (Figure 3) with SSS of 0. The patient’s chest pain was considered to be of non-cardiac origin. 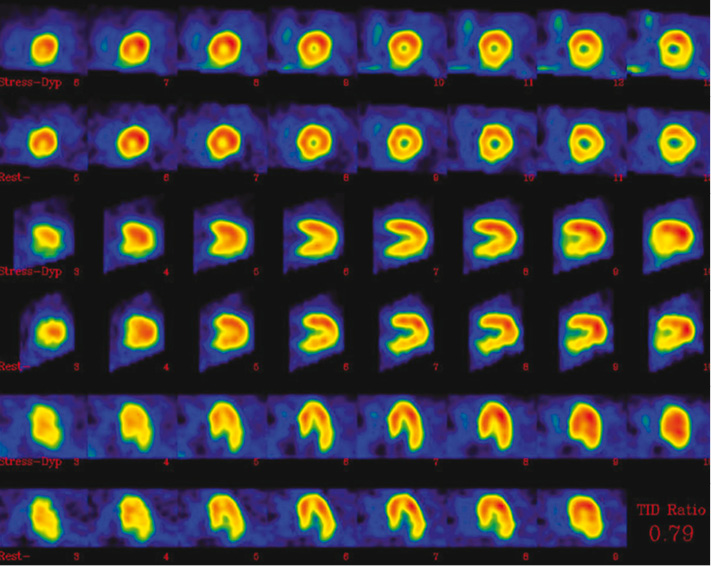 It has been reported that 25–30% of LBBB patients have significant coronary artery disease [6] and MPI is recommended for CAD screening [2]. In LBBB, a delay in septal activation and relaxation is observed which has an unfavorable effect on diastolic coronary flow [2]. Therefore, these patients mostly have reversible septal perfusion defects which are more striking at higher heart rates [7]. Pharmacological stressors, such as dipyridamole or adenosine, which do not significantly affect the heart rate, are therefore suggested for use during MPI in patients with LBBB [4]. On the other hand, very few studies have been carried out on MPIs performed on patients with RBBB [5]. The discussed case showed that false-positive perfusion defect in the anteroapical wall in both MPIs with exercise stress may occur in a patient with RBBB. The perfusion defects in the inferior and inferolateral walls in the first MPI with exercise most likely was due to supine position. These results may indicate the use of pharmacologic stressors, such as dipyridamole, for RBBB patients. The false-positive results in the RBBB patient are almost certainly developed by the diminished regional myocardial blood flow with delayed wall motion, as with LBBB [5].

Another possible reason for false positive-results from MPI is hypertrophic cardiomyopathy, however, the normal echocardiogram and also the normal gated SPECT semi-quantitative analysis in the presented case, ruled out the probability of this factor.

Previous studies have demonstrated that, except in LBBB individuals, conduction disorders such as RBBB, left anterior hemiblock, and Wolff-Parkinson-White Syndrome with normal coronary angiograms, have all presented with normal exercise MPIs [8]. In one study, Tawarahara et al assessed the specificity of exercise thallium-201 emission computed tomography for coronary artery disease in 87 cases with intraventricular conduction disturbances, including 33 with RBBB, 11 with RBBB and left-axis deviation, 11 with LBBB, 12 on right ventricular pacing, and 20 with Wolff-Parkinson-White (WPW) syndrome [9]. This study showed that there was no significant difference between specificity in RBBB patients (86%), those with WPW syndrome (90%), or with patients with normal intraventricular conduction [9].

Another study by Delonca et al investigated 134 cases with complete and permanent bundle branch block, and showed that exercise scintigraphy is a reliable method for detection of coronary lesions in patients with RBBB [10].

De Paulo et al performed a study to evaluate the accuracy of MPI, using exercise (n = 7) or dipyridamole (n = 24) in the detection of CAD in 31 patients with RBBB [12]. The sensitivity and specificity were 87% and 100%, respectively. Although they did not compare the stress type of MPI, they concluded that the presence of RBBB does not affect the accuracy of the method used in the detection of coronary artery disease [12].

On the contrary, limited studies have shown negative effects of RBBB on the accuracy of stress MPI [5]. In the largest study, 31 RBBB patients who had normal echography and coronary angiography underwent MPI using 201 thallium [5]. In total, 24 patients had normal images and 7 patients demonstrated hypoperfusion in the inferolateral walls, including irreversible defects in 5 cases and reversible defects in 2 cases [5]. They concluded that MPI results must be interpreted cautiously with RBBB patients [5]. Although they did not perform a pharmacologic MPI for those patients with abnormal MPI, in order to compare the exercise and pharmacologic methods with these subgroups of patients, however, it did indicate that there was less accuracy with exercise MPI than with pharmacologic stress, when detecting CAD in RBBB patients.

However, pharmacologic stress testing may be applied to assess myocardial perfusion in RBBB patients, while functional studies using the gated mode, as in the above case, may help to obtain additional information to enable an accurate interpretation of the MPI of these patients.

The presented case may demonstrate the false-positive perfusion defects on exercise 99m Tc-sestamibi cardiac SPECT images in patients with RBBB. The authors recommend using pharmacologic stress testing, accompanied with the gated mode, to ensure the accuracy of MPI as used in the detection of CAD in RBBB patients. However, before this information is utilized in routine practice, it needs to be confirmed in a large and well-designed study.

The author(s) declare that they have no conflict of interest.