Abstract
Background: The validity of functional assessment of coronary artery disease with fractional flow reserve (FFR) and/or instantaneous wave-free ratio (iFR) in patients with severe aortic stenosis (AS) might be affected by AS per se and other factors, including diabetes mellitus.
Aims: We aimed to evaluate the impact of diabetic status on FFR performance in severe AS.
Methods: The functional significance of 416 stenoses of intermediate angiographic severity in 221 patients with severe AS was assessed with iFR and FFR. Patients treated with insulin or oral hypoglycemic agents were classified as diabetic patients.
Results: Of 221 enrolled patients, 68 (32.1%) patients were diabetic. A total of 128 (30.8%) lesions in patients with and 288 in patients without diabetes mellitus were assessed. The mean (SD) FFR was 0.85 (0.07), and iFR was 0.90 (0.04) with no difference between nondiabetic and diabetic patients. Good agreement between iFR and FFR was confirmed for non-diabetic (ICC, 0.83 [95% confidence interval, CI, 0.79–0.86]) and diabetic (ICC, 0.82 [95% CI, 0.76–0.87]) patients. Among patients without diabetes mellitus, the optimal cutoff value for FFR to detect iFR ≤0.89 was 0.81 with sensitivity and specificity of 96.6% and 100.0%. The optimal cutoff value for FFR to detect iFR ≤0.89 for diabetic patients was 0.83 with sensitivity and specificity of 98.0% and 100.0%.
Conclusions: In patients with severe AS, FFR correlates well with iFR. However, the optimal threshold for FFR to identify significant ischemia (iFR ≤0.89) in those patients may differ from the standard threshold of FFR ≤0.80 and might be affected by the diabetic status.
Key words: aortic stenosis, diabetes mellitus, fractional flow reserve, functional assessment, instantaneous wave-free ratio

Although the current European Society of Cardiology (ESC)/European Association for Cardio-Thoracic Surgery (EACTS) guidelines for the management of valvular heart disease [7] support the use of angio-guided revascularization, there is an increasing interest in coronary physiology assessment with fractional flow reserve (FFR) and/or instantaneous wave-free ratio (iFR) in the setting of severe AS. Both methods remain the standard approach to functional assessment of borderline lesions [8, 9]. However, so far, reported studies in patients with severe AS yield conflicting results, as the validity of FFR/iFR assessment might be affected by severe AS per se [10–12]. In addition, the cutoff values of FFR/iFR to identify significant ischemia in that setting may differ from the recommended for the general population of patients with stable CAD [10, 12, 13]. In addition, some other factors, including diabetes mellitus, may influence the results of FFR/iFR measurements, but this concept has not been validated in patients with severe AS yet [10, 14]. Thus, we sought to evaluate the impact of diabetic status on FFR performance in the setting of severe AS.

From 2018 to 2020, 221 consecutive patients with severe AS who underwent FFR/iFR assessment of angiographically intermediate coronary artery stenoses (40%–90% diameter stenosis by visual assessment) were prospectively enrolled. Severe AS was defined as aortic valve area (AVA) <1.0 cm2 and a mean aortic valve pressure gradient >40 mm Hg. Patients with a history of diabetes mellitus treated with insulin or oral hypoglycemic agents were classified as diabetic patients. No data concerning the type of diabetes (type 1 or 2), duration of symptoms, and type and dose of oral hypoglycemic drugs were collected. Coronary angiography was performed with the standard femoral or radial approach based on individual operator preferences. The methodology of FFR/iFR assessment was previously described [13, 15–18]. Assessment of iFR was repeated three times and the mean value was analyzed. Adenosine was administered intravenously as an infusion of 140 µg/kg/min for FFR measurement. Lesions with FFR ≤0.80 were considered for further revascularization. Quantitative coronary angiography (QCA) was performed offline by an independent core lab. Using the guide catheter for calibration and an edge detection system (CAAS 5.7 QCA system, Pie Medical, Maastricht, The Netherlands), the reference vessel diameter and minimum lumen diameter were measured, and the percent diameter stenosis (%DS) was calculated.

Ethics approval (no. 1072.6120.1.2019, January 31, 2018) was granted by the institutional ethical board of the Jagiellonian University Medical College, and all patients gave their written informed consent. The study protocol conforms to the ethical guidelines of the 1975 Declaration of Helsinki.

Categorical variables are expressed as number of patients (percentages) and compared between groups with the χ٢ test and Fisher’s exact test. Continuous variables are expressed as mean with standard deviation (SD) and compared between the groups using Student’s t-test. The agreement between FFR and iFR was expressed by the intraclass correlation coefficient (ICC). Receiver-operating characteristic (ROC) curve analysis was used to assess the ability of FFR to predict iFR ≤0.89 and iFR to predict FFR ≤0.80. Results of the analysis are presented as unadjusted areas under the ROC curve (AUC) with a 95% confidence interval (CI). Optimal cutoff values were determined by maximizing the Youden index. All tests were 2-tailed, and a P-value <0.05 was considered statistically significant. All statistical analyses were performed using STATISTICA 13.3 (TIBCO Software Inc., Palo Alto, CA, US).

A total of 221 patients with severe AS were enrolled. Of those, 68 (32.1%) patients were diabetic. Compared with nondiabetics, those with diabetes were younger and had higher left ventricular ejection fraction (Table 1).

In the whole group of 221 patients, 416 coronary stenoses of intermediate angiographic severity were identified — 128 (30.8%) in patients with and 288 in patients without diabetes mellitus. No difference in the severity of CAD within the assessed vessels was observed (Table 2). 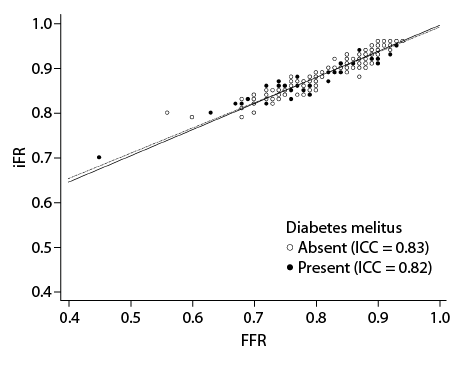 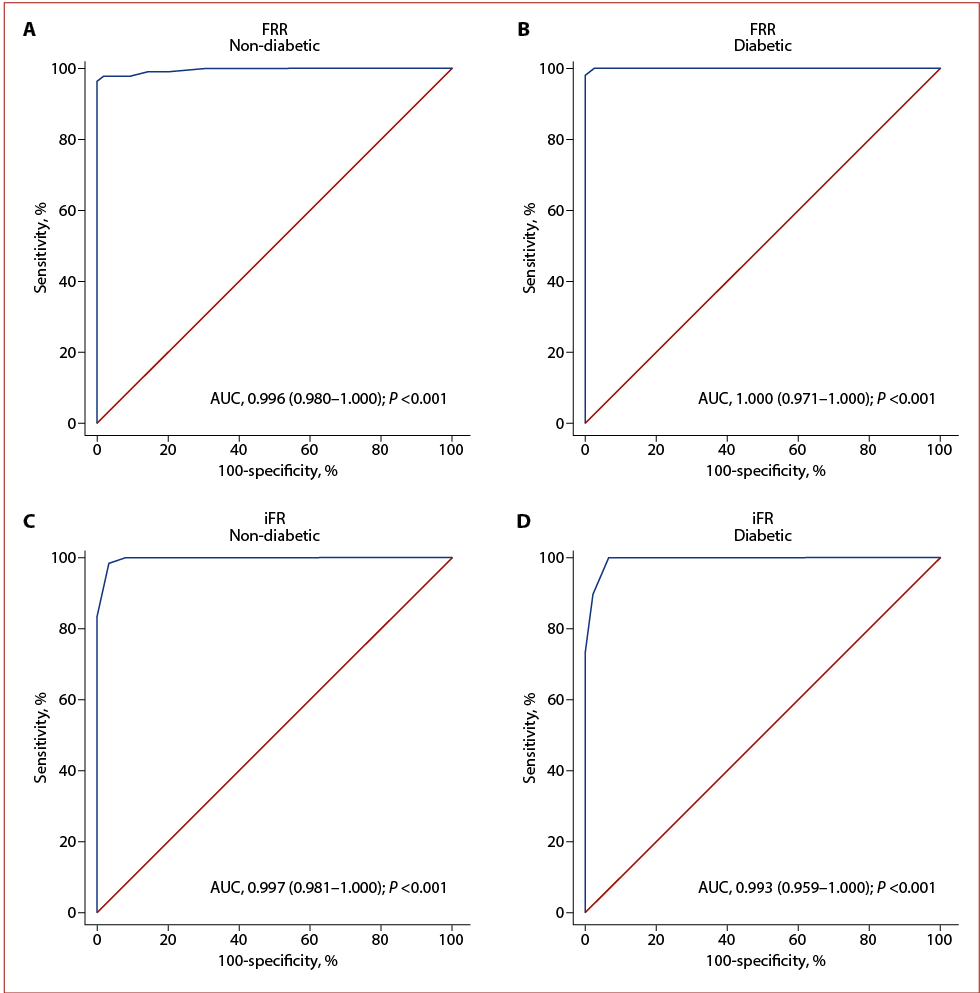 The major finding of this study is that in patients with severe AS, the cutoff value for FFR to identify significant ischemia might be higher than the standard threshold of 0.80. More importantly, this value might be modified by several other factors, including diabetes mellitus. Thus, particular care is required when interpreting borderline results of FFR in those patients to avoid false-negative results of ischemia assessment.

Due to the aging population and increasing number of elderly patients with severe AS, the problem of their treatment is growing [2, 6, 7]. More importantly, concomitant CAD and diabetes mellitus are highly prevalent and may affect the outcomes for those patients [2–6]. Current ESC/EACTS Guidelines for the management of valvular heart disease recommend surgical revascularization of coronary artery diameter stenosis of ≥70% (≥50% for left main) in patients with a primary indication for aortic valve surgery [7]. In addition, coronary artery bypass grafting should be considered in coronary arteries with ≥50%–70% diameter stenosis. On the contrary, for patients with severe AS scheduled for TAVI, percutaneous coronary intervention (PCI) should be considered only within >70% diameter stenosis lesions located in proximal segments. This recommendation seems surprising as there is a growing body of evidence confirming the relationship between the burden of CAD and/or lack of complete revascularization and long-term outcomes after TAVI. Especially assessment of angiographically borderline lesions in the setting of severe AS might be tricky, as chest pain and/or dyspnea might be caused by both CAD and severe AS [7, 10]. Still, coronary physiology assessment with FFR and/or iFR remains a gold standard also in patients with severe AS [8–10]. Importantly, a study by Lunardi et al. [19] has confirmed the benefit of FFR-guided treatment instead of angio-guided PCI in patients with severe AS undergoing TAVI. The observed benefit was driven mainly by the reduction of periprocedural complications. On the other hand, both FFR and iFR values might be altered by the presence of a falsely low aortic pressure related to the restricted aortic valve orifice [10]. In addition, in patients with severe AS, a blunted vasodilatation ability is suggested. The blunted vasodilatation ability might be a result of myocardial hypertrophy, microvascular dysfunction, and raised left ventricular end-diastolic pressure (LVEDP) observed in those patients [10]. Although increased LVEDP and myocardial hypertrophy might affect the results of both FFR and iFR measurements, iFR seems to be more reliable in the setting of severe AS as its assessment is less likely to be influenced by the blunted vasodilation ability of coronary microcirculation [10, 12]. Thus, iFR was used as a reference method of ischemia assessment in our study. The validity of this concept was confirmed by recent studies by Vendrik et al. [20] and Ahmad et al. [21] in which a significant immediate decrease in FFR values after treatment of severe AS with TAVI was observed. On the contrary, no difference in iFR values was noted.

Our findings indicate that interpretation of FFR requires special vigilance in patients with severe AS [10, 12, 13]. It may be particularly true for patients with concomitant diabetes mellitus, as diabetes mellitus aggravates microvascular dysfunction [6, 9]. Notably, AS and diabetes mellitus were identified as independent factors affecting the discrepancy between iFR and FFR [14]. While FFR maintains a valuable positive predictive value for ischemia detection in diabetic/severe AS patients, its accuracy in excluding ischemia seems lower than for nondiabetic/non-severe AS patients [10]. Special caution may be required in the interpretation of borderline FFR values (0.80–0.83), with the possible use of a hybrid approach to iFR and/or intracoronary imaging. Moreover, reassessment of ischemia after TAVI might be justified in those patients, especially with persistent angina and/or lack of left ventricular function recovery [12].

We should acknowledge several limitations of this study. The study has a relatively small sample size. No noninvasive assessment of myocardial ischemia was performed; thus, the use of additional reference methods was not possible. Coronary physiology assessment was not repeated after severe AS treatment, and no data on central venous pressure, as well as coronary flow reserve, were collected.

In conclusion, in patients with severe AS, FFR correlates well with iFR. However, the optimal threshold for FFR to identify significant ischemia (iFR ≤0.89) in those patients might differ from the standard threshold of FFR ≤0.80 and may be affected by the diabetic status.