One of the increasingly common causes of ischemic stroke in young and middle-aged patients, with small female dominance, is spontaneous carotid artery dissection (SCAD). The main mechanism for stroke on those occasions, is thromboembolism, while others believe that hemodynamic insufficiency plays a crucial role [3, 4]. The etiology and pathogenesis of SCAD are not yet fully understood [2]. It is thought that SCAD may be caused by external factors (hypertension or trauma), internal factors (primary arterial wall disease), or a combination of both [2]. It can be asymptomatic or symptomatic. Symptoms in most patients with carotid dissection include headache or neck pain. The treatment of SCAD is still controversial, ranging from conservative treatment with antiplatelet drugs only to open surgery or endovascular treatment [1–4].

For the last one year in our clinic we treated endovascularly three patients with spontaneous dissection of the internal carotid artery. All cases were performed under intravascular ultrasound guidance to visualize, as much as possible, dissection extension and to guide the right size of devices and verify the outcomes. Patients provided written informed consent to participate.

In all three cases, first we advanced a 6 F guide catheter in the common carotid artery. Then we crossed the dissection through the true lumen with a 0.014-inch glide wire. We confirmed the position by contrast injection under fluoroscopy. After that, we placed a distal protection filter Spider-Fx 5 mm. The distal protection device was required to prevent distal embolization of thrombus fragments formed in the false lumen. We preferred the implantation of the Wallstent and BioFreedom stents. MicroNet-covered stents are a possible alternative, but they have a higher crossing profile [15, 16].

A 31-year-old woman was admitted with a headache and gradually developing weakness in her right limbs, with preserved coordination. On nuclear magnetic resonance of the head, the dissection of the left internal carotid artery (ICA) with a length of about 25 mm was visualized, with a demonstration of acute and early subacute ischemic changes in the left cerebral hemisphere (Figure 1A). 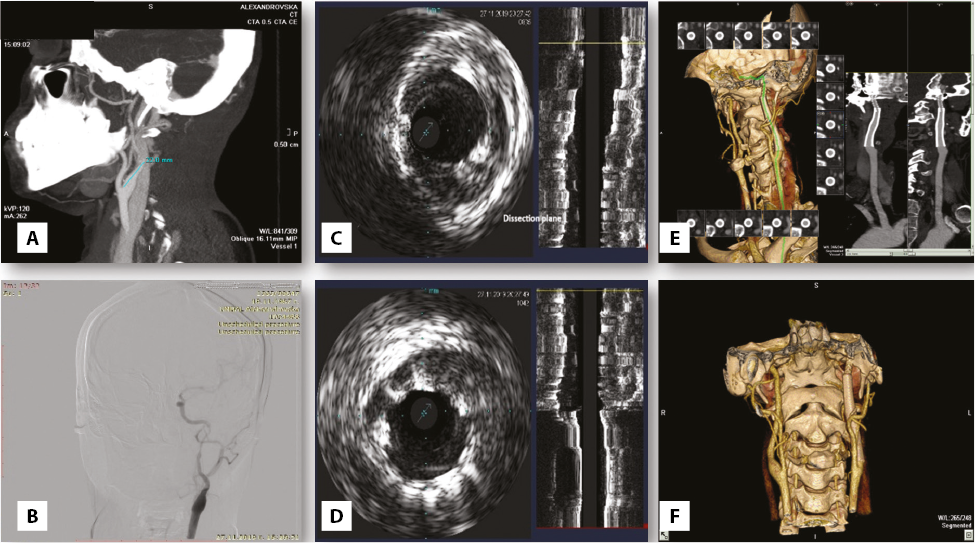 The patient was loaded with clopidogrel and aspirin. Carotid angiography was performed. The size and extension of the artery and dissection were unclear from the contrast-enhanced computed tomography (CT) and angiography, and a decision for intravascular ultrasound (IVUS) examination was taken. It was possible to advance an IVUS probe to the level of C3 segment with a good determination of distal vessel size. After placement of the distal protection filter Spider-Fx 5.0 mm, a balloon dilation with a Sprinter balloon 3.0 × 30 mm at 2–3 atm was performed to visualize better distal vasculature. Then, 2 stents were implanted from proximal to distal — Wallstent 7.0/50 mm, BioFreedom 4.0/24 mm. The final IVUS does not show residual dissection (Figure 1B–D). After the procedure, the patient was without headache and nausea, but still with the persistence of right hemiparesis and hypesthesia on the right. A week later, control CT demonstrated well-apposed stents, with a minimal residual wall hematoma of the left ICA, an ischemic area formed in the area of the precentral curve in the basin of the left middle cerebral artery. On contrast-enhanced CT performed during follow-up, the stents were without restenosis, with resorption of hematoma behind the stent struts and maturation of ischemic changes in the left hemisphere (Figure 1E, F).

A 63-year-old woman was admitted to the hospital after a loss of consciousness, lasting 5 minutes, occurring during a walk. In recent months, she had two similar episodes — one during defecation, the other during a meal. In her history, she had long-lasting arterial hypertension (over 10 years) with no optimal drug control and diabetes diagnosed 7–8 years earlier — patient has diabetes mellitus, she is on drug treatment, without insulin. On 24-hour electrocardiography monitoring, she was without evidence of arrhythmias or conduction abnormalities. The neurological status was normal. Duplex ultrasonography (DUS) of carotid arteries was performed, and dissection of the left carotid artery was observed. During the examination, the patient abruptly lost consciousness. She was immediately transferred to the catheterization laboratory. Clopidogrel and Aspirin loading doses were given. We performed carotid angiography, which demonstrated dissection in the common carotid artery with extension to the ICA. An IVUS examination was performed and dissection up to the level of C2 segment was visualized. An intervention was made with direct stent implantation, Wallstent 7.0/50 mm and SPIDER-FX 5.0 mm distal protection. On control IVUS, there was no evidence of residual dissection. After the procedure, the patient remained hemodynamically stable, with no abnormalities in neurological status. She was followed up at 3 and 6 months after the procedure with DUS (patient refused control CT), and no neurological symptoms were detected (see Supplementary material).

A 37-year-old man arrived in hospital with a 10-day history of numbness and a deviated tongue on the left. He did not report any comorbidities or use any medications. On CT of the brain (without contrast), there was no evidence of stroke. On DUS, a flap was visualized at the ostium of the left ICA, with severely reduced blood flow and thrombosis. Antiplatelet therapy with clopidogrel and aspirin loading doses were given. Magnetic resonance tomography was performed, which showed dissection in the distal part of the left ICA. Carotid angiography confirmed the occurrence and localization of dissection. An IVUS examination was performed with lesion interrogation. After using low-pressure balloon predilation with a coronary balloon 3.0 × 25 mm at 2–3 atmospheres, Wallstent 7.0 × 50 mm was implanted. After the procedure, the patient was without abnormalities in neurological status. The patient was followed up at 3 and 6 months after the intervention. The control CT one year later showed no pathological abnormalities, and the stent was without restenosis (see Supplementary material).

We followed the patients at 12 and 24 months. They are all alive and none of them have neurological symptoms. They continue treatment with only one antiplatelet drug, clopidogrel.

For the first time in the late 1970s, Fisher et al. and Mokri et al. [7, 8] described dissections of carotid and vertebral arteries. The main complication of SCAD is stroke. It can occur in the first 24 hours or up to one month after dissection. The outcomes can be fatal or lead to serious impairments in quality of life. Mechanisms for stroke include thromboembolism, or hemodynamic insufficiency — a decrease in cerebral blood flow from the primary cervical lesion [4, 6, 7]. Using non-invasive and invasive methods, the dissection of the carotid artery can be depicted well enough and a decision about the subsequent treatment can be made.

The main goal in the treatment of SCAD is to prevent ischemic complications that may occur as it progresses. However, there are still controversies about the choice of treatment. It is recommended that the first-line treatment at the beginning of the healing process is the inclusion of antithrombotic drugs. There are no studies to prove their effectiveness [5]. The question is whether to continue only with drug therapy or to switch to surgical or interventional treatment. Of course, in certain circumstances, the choice is clear when we have patients with subarachnoid hemorrhage, recurrent hemorrhagic or ischemic events after initiation of drug treatment, or patients who developed dissecting pseudoaneurysms, also in the case of inability to take antithrombotic drugs [10, 11]. In the last decade, however, carotid stenting has progressed dramatically. Revascularization with stent placement may improve perfusion and limit embolism in patients with embolic or hemodynamic symptoms, just like in our cases. The results show that it can be used safely and effectively even during acute ischemic stroke [12, 13]. Intravascular ultrasound examination has been introduced to improve immediate outcomes after percutaneous transluminal balloon angioplasty and stent placement in carotid stenosis [14]. Here, to the best of our knowledge, we report for the first time the IVUS-guided strategy for the treatment of SCAD. The ultrasound examination has much higher resolution than angiography and CT. This allows for a much more accurate determination of the beginning and end of the dissection region, as well as vessel diameters and lesion length. With the help of IVUS, one can accurately identify stent underexpansion, malapposition, and plaque protrusion. Although further research is needed in this direction, we show that the use of IVUS before and after stenting of acute spontaneous carotid artery dissection can be safe and lead to successful long-term outcomes.

Endovascular stent placement appears to be a safe and effective option to restore vascular lumen integrity and prevent stroke. Using IVUS as a guide for stent placement and post-stenting confirmation will help ensure proper positioning and improved patency.