Department of Internal Medicine and Cardiology,

There is an ongoing discussion in the literature on the role of temporary mechanical circulatory support in the treatment of mechanical complications of myocardial infarction (MI) [1]. We present the use of venoarterial extracorporeal membrane oxygenation (V-A ECMO) as a bridge to surgery for patients with papillary muscle rupture to obtain hemodynamic and metabolic stabilization, unload the left ventricle for muscle regeneration, and reduce antiplatelet therapy effect to minimize perioperative bleeding. The 47-year-old patient was admitted to the cardiac surgery department with a cardiogenic shock and pulmonary edema due to acute mitral regurgitation following a postinfarction rupture of the posteromedial papillary muscle. Coronary angiography performed 7 days earlier (on the third day after acute cardiac pain onset) revealed total right coronary artery occlusion in the second segment (Figure 1A). There were no significant lesions in the remaining coronary vessels. After an unsuccessful attempt at revascularization, the patient was discharged home in good condition and re-admitted two days later due to pulmonary edema requiring mechanical ventilation. Transthoracic echocardiography unveiled severe mitral regurgitation due to rupture of the head of the posteromedial papillary muscle (Figure 1B) and deep anterior leaflet prolapse (Figure 1C), as well as extensive akinesis of the inferior wall and posterior part of the interventricular septum. The left ventricle ejection fraction was 40%. The patient was qualified for peripheral V-A ECMO as a bridge to delayed surgical treatment because of severe cardiogenic shock, antiplatelet therapy (ASA, prasugrel), and a recent MI. The risk of postoperative mortality, according to EuroSCORE II and STS scores, was 14.03% and 21.13%, respectively. ECMO was instituted under transesophageal echocardiography and ultrasound guidance through femoral vessels. In addition, a control chest X-ray was performed, which confirmed the correct position of the venous cannula (Figure 1D). The hemodynamical and metabolic status of the patient improved, and after 3 days of mechanical circulatory support, a mechanical mitral valve prosthesis was implanted through right-sided minithoracotomy without removal of the subvalvular apparatus (Figure 1E, F). The choice of the type of intervention and the prosthesis was motivated by the patient’s age and the uncertain results of native valve repair shortly after MI. Importantly, the latest data indicate unfavorable results of the edge-to-edge transcatheter mitral valve repair in patients with cardiogenic shock demanding mechanical circulatory support [2]. V-A ECMO was weaned. The patient required inotropic support in a perioperative period. A gradual improvement in the general condition was observed. On day 10 after the operation, the patient was discharged home in a good overall condition. 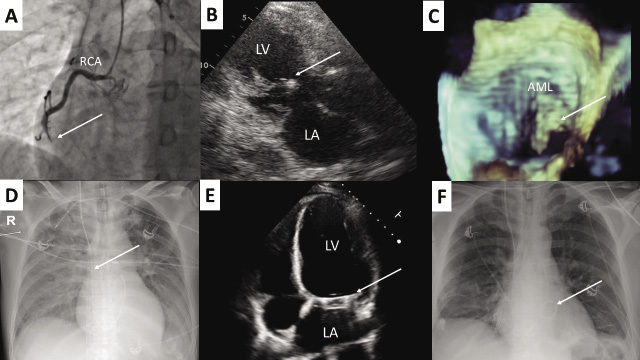 Papillary muscle rupture is a rare and serious mechanical complication typically of transmural inferior MI [3]. Acute surgical intervention remains the treatment of choice, reducing the mortality rate in the course of this disease from approximately 80% to 39% in a large, experienced center series [5] with a high risk of other complications, often due to the patient’s hemodynamic instability and increased risk of bleeding [3–5]. Preoperative V-A ECMO may increase the survival rate by improving the patient’s hemodynamical status, protecting against tissue ischemia, reducing the antiplatelet effect, and getting time to enable postinfarction myocardial recovery.