Abstract
Background: The treatment of aortic root aneurysm remains challenging for both cardiac surgeons and cardiologists.
Aims: This study aimed to assess and compare the long-term outcomes of different approaches to aortic root replacement (ARR).
Methods: All elective patients operated for aortic root aneurysm with or without aortic regurgitation at our institution over a 10-year period were included. We excluded patients with any degree of aortic stenosis and with active endocarditis. We assessed mortality, freedom from reoperation, freedom from aortic valve regurgitation, and the rate of hemorrhagic and thromboembolic complications.
Results: Two hundred and four patients underwent elective aortic root replacement: 107 (53%) valve-sparing aortic root replacement (VSARR), 35 (17%) mechanical Bentall procedure (MB), and 62 (30%) Bio-Bentall procedure (BB). Early mortality for VSARR, BB, and MB group was 2.8%, 4.8%, and 0%, respectively (P = 0.40). Estimated 5-year survival was: 90.2% vs. 78.4% vs. 94.2%, respectively (P = 0.12), 5-year freedom from reoperation: 97.8%, 96.6%, and 96.8%, respectively (P = 0.99). Estimated 5-year freedom from complications was: 94.2%, 83.1% and 57.3% in the VSARR, BB and MB group, respectively (P <0.001). On last follow-up echocardiography, 90.5%, 98.4%, and 97.1% (P = 0.08) of patients were free from aortic regurgitation grade 2 or higher. The median (IQR) aortic valve peak gradient was 9 (6–12) mm Hg, 12 (10–18) mm Hg and 16 (14–22) mm Hg, respectively (P <0.001). Complications were predicted by mechanical Bentall (hazard ratio, 6.70 [2.54–17.63]; P <0.001).
Conclusion: With the same mortality, freedom from reoperation, and a minimal late complication rate in comparison with mechanical Bentall and Bio-Bentall, VSARR might be the preferred approach to aortic root aneurysm.
Key words: aortic root aneurysm, aortic root replacement, Bio-Bentall, mechanical Bentall, valve-sparing

The only effective treatment method for aortic root aneurysm is aortic root replacement (ARR) [1]. Currently, the „gold standard” for ARR is represented by the procedure proposed in 1968 by Bentall, which consists of the replacement of both the aortic root and the aortic valve with the use of a composite mechanical valved conduit [2]. In older patients, the available alternatives to the classical Bentall procedure include the ARR with the homograft [3], xenograft [4], or bio-conduit [5]. However, in younger patients who want to avoid the adverse effects of mechanical or biological aortic valve prostheses, the procedure of valve-sparing aortic root replacement (VSARR) has been proposed. This approach enables the replacement of the enlarged aortic root, with the preservation of the native aortic valve. Two main techniques of VSARR are currently available in clinical practice: the aortic valve re-implantation introduced by David and Feindel in 1992 [6] and aortic root remodeling proposed by Sarsam and Yacoub in 1993 [7].

The selection of an approach to ARR is important both for patients, whose expectations it has to meet, and for their cardiologist.

Several studies on late outcomes of different approaches to ARR have been published recently; however, only a few include the direct comparison of these approaches [8, 9].

This study aimed to assess and compare the long-term outcomes of different approaches to ARR.

The local Institutional Review Board did not consider the study to be a medical experiment. Therefore, approval was not required (no. KNW/0022/KB/284/17 dated December 12, 2017).

The study included patients who underwent an elective ARR with or without co-existing aortic valve regurgitation at our institution from January 2010 to December 2020 but excluded those with aortic valve stenosis. Patients with acute aortic dissection or active endocarditis were also excluded. However, we included patients requiring additional surgical procedures (Figure 1). 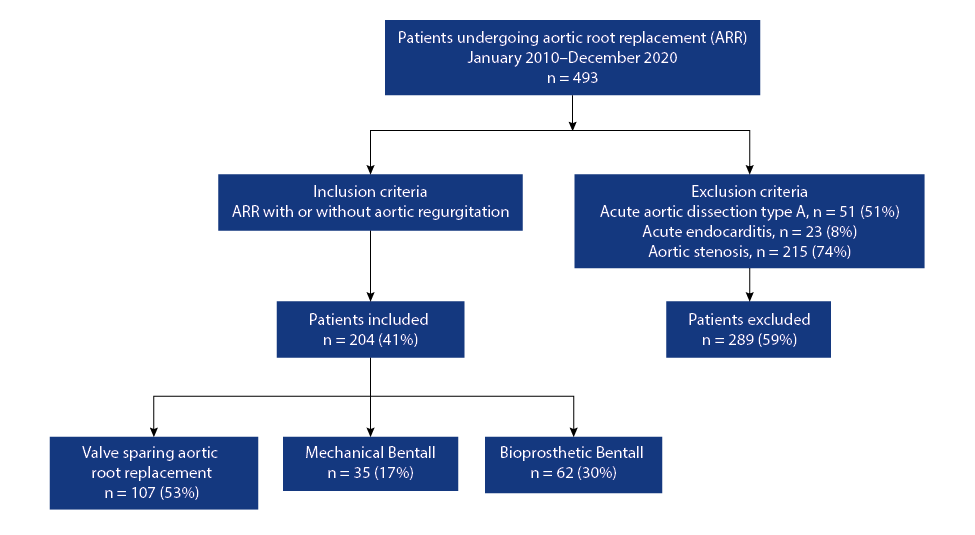 Mortality, the occurrence of complications, and freedom from reoperation status were ascertained from one or more of the following: the patient’s visit in the outpatient clinic, telephone contact with the patient or patient’s relatives, National Registry of Cardiac Surgical Procedures (www.krok.csioz.gov.pl). This registry contains the mortality data obtained from the National Health Fund. Death from all causes and only reoperations due to aortic valve dysfunction were included in the analysis. Freedom from aortic valve regurgitation was assessed in the TTE performed during the follow-up visit or ascertained based on the latest TTE report available from the outpatient clinic.

The decision about the type of ARR (valve-sparing vs. mechanical vs. biological Bentall) was made by the operating surgeon and the patient.

Data are presented as median (interquartile range [IQR]). Categorical data are expressed as a percentage. χ2 or Fisher’s exact tests were used where appropriate to compare proportions with post hoc comparisons using the z test. P-values were adjusted for multiple comparisons using the Bonferroni correction. To compare the groups, the Kruskal-Wallis H test for the independent sample with Bonferroni adjusted pairwise comparisons was used. Kaplan-Meier time to event curves were generated, and the 5-year event probability estimate with the standard error was reported. The groups were compared with the log-rank (Mantel-Cox) test. A P-value of less than 0.05 was considered significant. The predictors of mortality and complications were identified by the parsimonious multivariable Cox regression. The backward conditional method was used for variables selection with variables with score statistics below <0.1 retained in the model. In the case the final model did not include the variable of interest (i.e. Root replacement method), this variable was entered into the final model manually to assess its impact on the outcome. 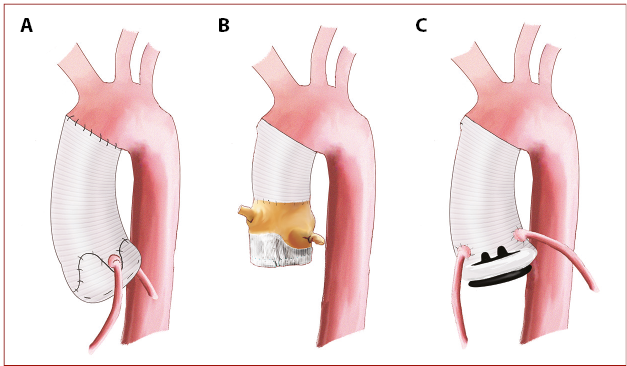 Detailed demographic and echocardiographic data are presented in Table 1.

Early mortality in the whole study population was 2.9% (6 patients). The numbers for subgroups VSARR, BB, and MB were 2.8% (3 patients), 4.8% (3 patients), and 0%, respectively (P = 0.40). There were no significant differences between the subgroups as to the rate of postoperative bleeding, tamponade, stroke, renal failure, pneumonia, wound infection, and permanent pacemaker implantation (Supplementary material, Table S1). The shortest stay in the intensive care unit and the cardiac surgical ward was recorded in the VSARR subgroup — 2 (2–3) days and 8 (7–10) days, respectively (P = 0.003). 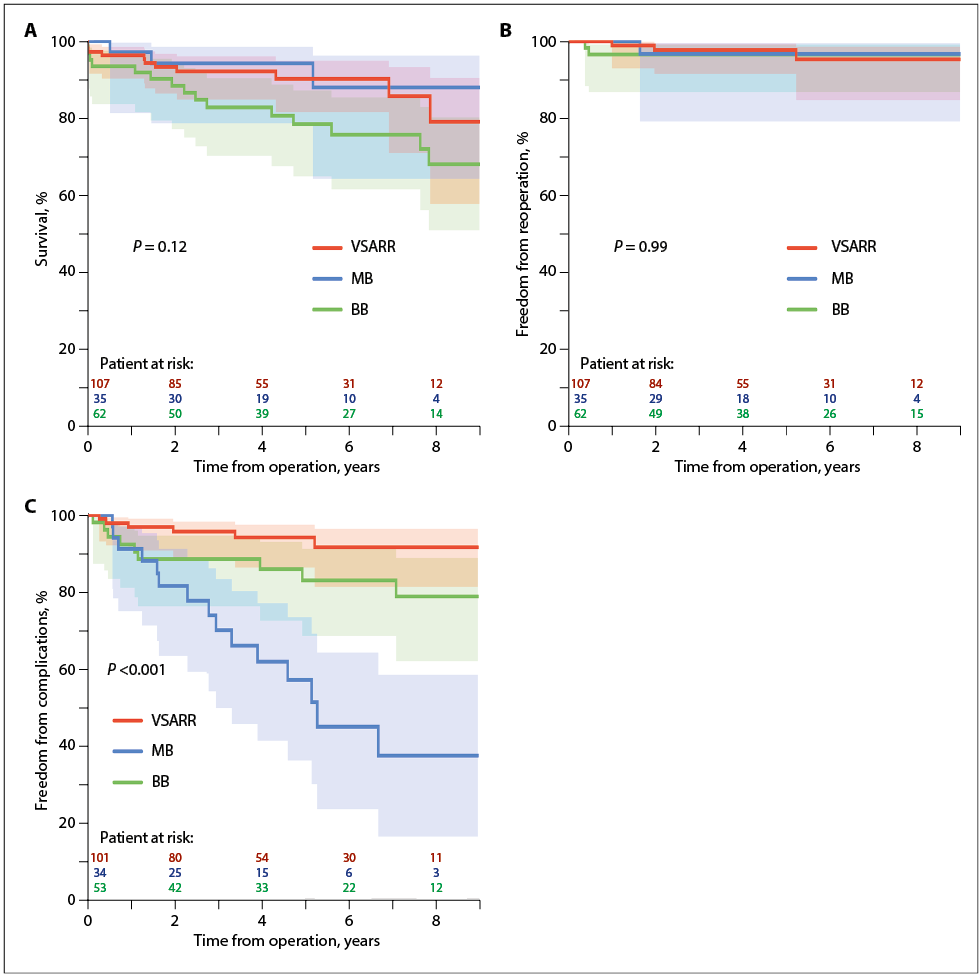 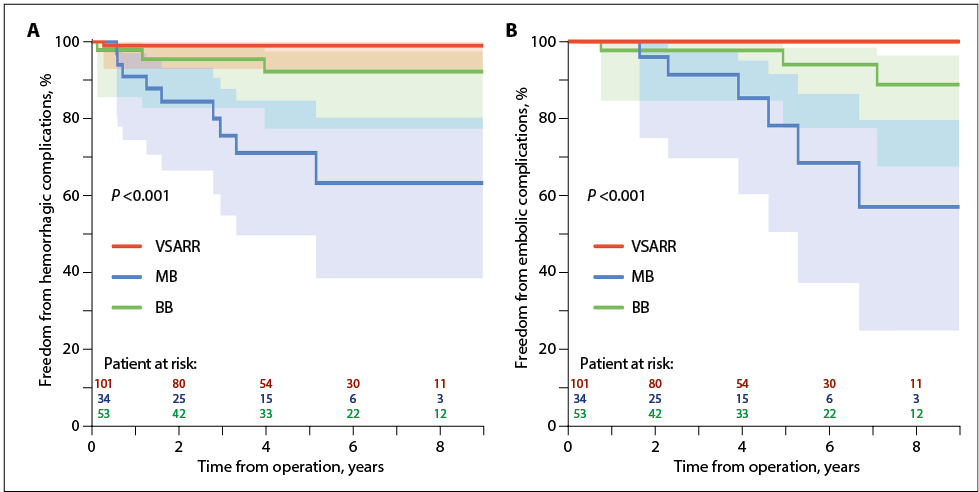 Figure 4. Freedom from complications after root replacement according to the surgical procedure. A. Hemorrhagic complications. B. Thromboembolic complications; Kaplan-Meier curves with 95% confidence interval. P from the log-rank (Mantel-Cox) test
Abbreviations: see Table 1 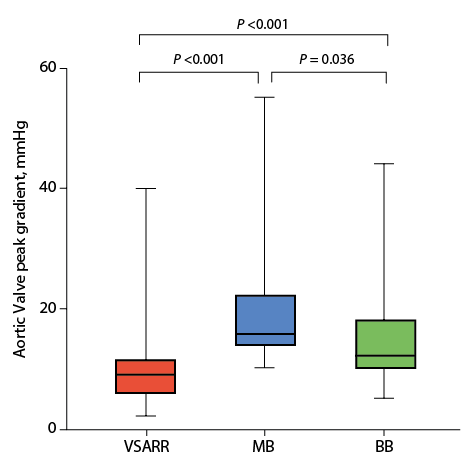 The classic Bentall procedure currently represents the gold standard approach to ARR, particularly in younger patients, for whom it seems to be a lifelong solution [13]. In elderly patients, to avoid the need for oral anticoagulation, the BB procedure can be performed alternatively [13]. With a growing number of reports reporting a considerable ratio of thromboembolic complications after MB [14, 15], new stentless valves have been proposed for younger patients [16]. Moreover, VSARR procedures have been introduced to clinical practice [6, 7], which not only obviate the need for oral anticoagulation but also enable the preservation of the patient’s native valve, thus ensuring a better hemodynamic profile in comparison to MB and BB. There is no consensus in the literature, whether during the ARR procedure the aortic valve should be repaired or replaced, and in the case of replacement, whether a mechanical or biological prosthesis should be preferred [17, 18]. Our analysis provides some guidance as to which approach to ARR yields the best outcomes and is associated with the lowest complication rate. Even though we have performed almost 500 ARR procedures during 10 years at our institution, we had to exclude patients with aortic valve stenosis to directly compare different approaches to ARR as in this group a VSARR procedure is usually not feasible and the pathology of the left ventricular wall muscle is different. All exclusions narrowed the study group to 204 patients; however, the selected study subgroups did not differ significantly as to baseline characteristics. The only difference was age, and it seems obvious, as the oldest patients were in subgroup BB and the youngest in subgroup MB. The baseline age heterogeneity seems to be inseparably associated with the analysis of different approaches to ARR and is present in several investigations published to date [17–19]. This is the consequence of age being one of the major factors impacting the choice of the valve prosthesis (biological vs. mechanical).

The assessment of early mortality did not reveal significant differences between the 3 subgroups (P = 0.40), and the overall mortality in the entire study group of 2.9% does not significantly differ from the early mortality of 1.9% reported by Yamabe et al. [20], who analyzed a large cohort of 371 patients.

This is the consequence of the small proportion of patients (1.9%) who developed severe aortic valve regurgitation during the follow-up. Notably, all 3 reoperations in the VSARR group were elective procedures performed due to severe aortic valve regurgitation, and all patients survived the surgery. In contrast, the reoperations in MB (1 patient) and BB subgroup (2 patients) were urgent procedures performed due to endocarditis with high operative risk, and 1 patient did not survive the surgery.

Considering that the comparison of early and late mortality, freedom from reoperation, and freedom from aortic valve regurgitation failed to demonstrate the advantage of any particular approach, it seems that the outcome which differs across the analyzed approaches is the rate of complications, both hemorrhagic and thrombo-embolic.

It is universally accepted that these complications not only substantially compromise the quality of life but also affect prognosis. Therefore, they should be taken into account while planning ARR surgery.

Similar low 7-year freedom from hemorrhagic and thromboembolic complications of 74.3% and 87.7%, respectively in the MB group was reported by Radu et al. [15].

In conclusion, based on our findings it seems that VSARR procedures represent the best option for patients undergoing ARR surgery. This approach is associated with low mortality, a low reoperation rate, and a very low rate of late complications. Among the analyzed approaches, VSARR is also favored by the lowest follow-up NYHA class and the lowest aortic valve peak gradient.

The major limitation of our study is its retrospective design and non-randomized assignment to the analyzed subgroups. This is a single-center study, and the selection of the approach to ARR was left at the discretion of the operating surgeon.

With the same mortality, freedom from reoperation, and a small complication rate in comparison with mechanical Bentall and Bio-Bentall, VSARR might be the preferred approach to aortic root aneurysm.

Funding: The work was supported by the statutory funds from the Medical University of Silesia (PCN-1-006/N/0/K to MAD).