*Both authors equally contributed to the study.

1st Chair and Department of Cardiology,

Transcatheter aortic valve implantation (TAVI) is currently the least invasive procedure available for the definitive treatment of severe symptomatic aortic stenosis (AS). Initially, it has been a highly specialized procedure, carried out only in a few selected academic centers in Poland, and only on inoperable, highest risk patients [1–3]. As time went by, due to positive results from large randomized trials, TAVI was recognized for a broader population of AS patients in European guidelines on the management of valvular heart disease and subsequently became more routine [4–8].

While the standards of care were changing, the number of TAVI procedures in Poland grew slowly but steadily from its introduction in 2008. Parallel to guidelines modifications, improvements in bioprothesis design and function, and changes in procedural technique and periprocedural management of patients were observed. Therefore, the aim of the study was to analyze temporal trends in baseline characteristics, procedural as well as clinical outcomes of patients treated with TAVI based on the experience of a high-volume polish academic center over the period of 10 years.

For the purpose of the study we included 506 consecutive patients who received TAVI from March 2010 to July 2019 and who gave their informed consent to enter Transcatheter Valve Treatment Sentinel Registry (2010–2012), which later was continued by the national POL-TAVI registry database [9, 10]. Data concerning patients’ characteristics and periprocedural outcomes were gathered prospectively. All patients completed a 12-month follow-up, as obligated by the registry protocol. The study was approved by the ethics committee of the Medical University of Warsaw and that patients provided written informed consent to participate in the study.

Given certain changes in clinical practice throughout the studied period, we decided to divide the study population into 3 groups. Group 1 (G1), early experience, procedures performed from March 2010 until the end of 2013. This period was characterised by no clinical practice guidelines or early introduction of the 2012 European Society of Cardiology (ESC) Valvular Heart Disease (VHD) guidelines. Also, first-generation bioprosthetic valves were used. Group 2 (G2), intermediate experience, from January 2014 until the end of 2016. Age of implementing 2012 ESC VHD guidelines with improved and new types of bioprosthesis being introduced. Group 3 (G3), recent experience, from January 2017 until July of 2019. Time of implementing the 2017 ESC VHD guidelines implementation and growing use of second-generation devices use.

Data was acquired using the hospital electronic database and outpatient clinic charts. All patients with an unconfirmed status were followed up remotely by telephone visits. All definitions are in accordance with Valve Academic Research Consortium Criteria-2 [11].

Kaplan-Meier curves and log-rank tests of the time-to-event data were used to assess the differences of 1-year all-cause mortality between the groups. Cox proportional hazard analysis was performed to find possible predictors of mortality in 1-year observation for all groups. All probability values reported are 2-sided and a value <0.05 was considered to be significant. Data were processed using the SPSS software, version 26 (IBM SPSS Statistics, NY, USA) and Medcalc, version 16 (MedCalc Software, Ostend, Belgium).

After dividing into subgroups the population of G1 consisted of 130 patients, G2 and G3 of 164 and 212 patients, respectively. There were no significant between-group differences in terms of either mean age or percentage of the female sex (Table 1).

Figure 1. A. Comparison of aortic valve area (AVA); B. and mean pressure gradients.

In G1 there were only 2 types of prostheses used (Corevalve 64.6% and Sapien/Sapien XT 34.6%) with the biggest diversification of the devices reached in G2. In G3 there was a visible reversion into utilizing 2 types of valves, both of them being self-expandable (Evolut R/PRO 47.6% and Portico 47.2%).

Procedural anesthesia has also been significantly transformed — from 95.4% of cases done in general anesthesia in G1 to only 26.9% in G3 (replaced by conscious sedation). Time has brought a significant increase in applying trans-femoral access for TAVI with 91.5% of cases performed this way in G3. With the introduction of trans-carotid access in late 2014 [12], more invasive trans-apical and direct-aortic access were gradually withdrawn. With higher rates of application of trans-femoral access came wider use of percutaneous closing devices (Prostar XL in G1, Prostar XL and Proglide in G2 and Proglide in G3) reaching 84.9% in G3.

There has been a gradual decrease in using predilatation before valve implantation (93.8% in G1 to 59.9% in G3) with a parallel increase in postdilatation (20.8% in G1 to 35.8% in G3). The procedural time was shortened and contrast use decreased (Table 2). 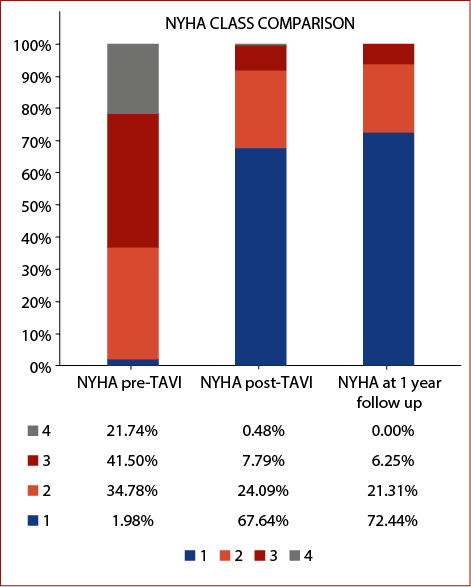 Figure 2. Functional status before and after TAVI.

In 67.6% of cases performing TAVI helped to completely relieve the signs of heart failure (NYHA I) or leave only minor symptoms (NYHA II 24.1%). This positive effect was maintained in survivors at 1-year observation (NYHA I in 72.4% and NYHA II in 21.3% of cases).

Moreover, patients in G3 had the shortest length of hospital stay. On the other hand, stroke rate and need for permanent pacemaker implantation did not decrease with time (Table 3). 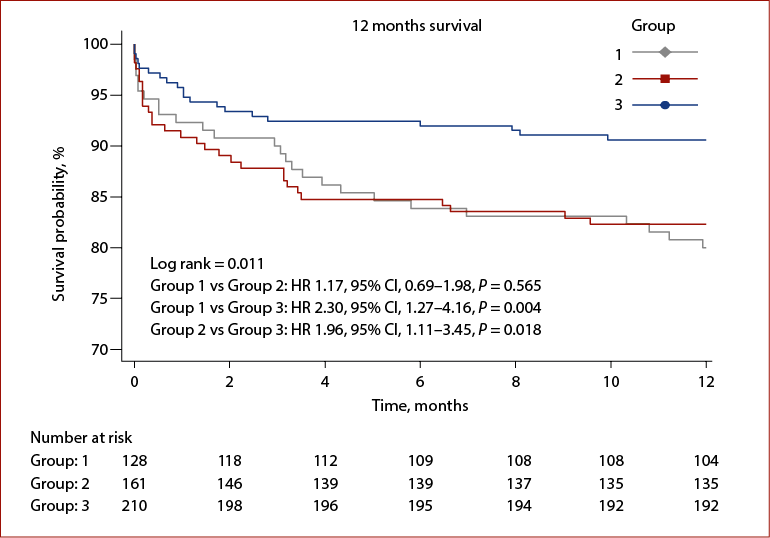 This analysis demonstrates that TAVI has been constantly evolving over the last decade. Starting with baseline characteristics, it is apparent that the approval of lower-risk groups in the guidelines has been subsequently implemented in real-life settings and reflected by lower values of logistic Euroscore. However, this change was not derived from decreasing patients’ age, which throughout the whole study was almost constant and close to 80 years on average, but rather from the smaller burden of concomitant diseases (e.g. fewer history of coronary artery bypass grafting, myocardial infarction, stroke, chronic kidney disease (CKD) and better baseline left ventricle function). This observation is in line with the results of randomized trials and registries, which compared TAVI and SAVR in populations with intermediate surgical risk [13, 14]. Also of note, in the early experience period, significantly higher mean transvalvular pressure gradients prior to the procedure were noted – possibly due to earlier referral and/or broader inclusion of low-flow, low-gradient AS at 2017–2019 period [15].

Throughout the years, broadening of indications for TAVI was accompanied by some relevant modifications in the periprocedural technique — reflected mostly by wide utilization of transfemoral access (over 90%) and conscious sedation (almost 75%) in our recent experience period. Significant improvements in delivery systems (size reduction and flexibility) and bioprothesis design (repositionability and sealing cuffs) available from a part of intermediate and recent experience (part of G2 and G3) were most probably behind the gradual reduction of clinically relevant post-procedural complications: e.g. major and life-threatening bleeding, major vascular complications and paravalvular regurgitation — all of which negatively impact survival after TAVI [16–21]. Also, growing experience with newer devices was the probable reason for the shortening of procedural time and lesser amounts of the contrast used. Despite best efforts some complications did not improve with time — the need for permanent pacemaker implantation remained quite substantial and close to 20% — although this can be perceived as a normal rate with self-expanding prostheses (at least before new “cusp overlap” implantation techniques were introduced, which is after the analyzed periods), which accounted for 100% of bioprostheses in G3.

It can be hypothesized that decreasing surgical risk (especially observed in recent experience period G3) combined with multifactorial improvements in periprocedural care and prosthesis implantation are the reasons behind better 1-year survival exceeding 90% in G3. Importantly, 2 independent risk factors for 1-year mortality were found, i.e. baseline CKD stage >3 and post-procedural stroke. As the first baseline factor is non-modifiable or only partly modifiable, the latter at least theoretically could be prevented or minimized. The rate of stroke was comparable with those described elsewhere, but considering its negative impact on quality of life and mortality, preventive measures, namely brain protection devices, although still not recommended, should be strongly considered in the future for selected individuals [22, 23].

In our dataset, we observed a clear survival improvement in short-term observation accompanied by stable echocardiographic parameters up to 1 year. The aim of future studies and registries should also focus on the assessment of long-term bioprosthetic performance [24, 25].

First, the obvious disadvantage of the current study is its retrospective nature, which is always burdened with its inherent limitations. Second, the larger cohort of TAVI recipients would allow for a more comprehensive analysis on a year-by-year basis and could point at more independent predictors of mortality. However, the present dataset is one of the largest in Poland to date. Finally, since the intermediate experience period, only self-expanding bioprostheses were available with their unique advantages and limitations.

Transcatheter aortic valve implantation has grown from an innovative intervention reserved only for highest-risk or inoperable patients with severe AS into an almost default procedure in elderly patients irrespective of baseline risk. Interestingly, the age of TAVI recipients remained unchanged over the last decade and did not add to the overall risk reduction. Decreasing surgical risk coupled with improvements in delivery systems, bioprosthesis design, implantation technique, and periprocedural care resulted in fewer complications and better 1-year survival in the 2017–2019 period.