The prognostic value of the platelet-to-lymphocyte ratio in acute coronary syndrome: a systematic review and meta-analysis

Acute coronary syndrome (ACS) is a leading cause of morbidity and mortality. Consequently, risk stratification is a very important issue for the prevention and management of ACS. The Global Registry of Acute Coronary Events (GRACE) score, which is one of the best performing prognostic scores, is based on simple admission clinical and biological parameters. The GRACE risk score provides an accurate estimation of in-hospital and six-month probabilities of death or myocardial infarction (MI) in all admitted patients with ACS at the early phase [1]; however, it is time-consuming and expensive to determine the score at admission. Inflammation plays an important role in the progression and destabilisation of ACS. Several inflammatory biomarkers, such as interleukin-6 [2], C-reactive protein [3], and matrix metalloproteinases [4], have been identified as independent predictors of adverse outcomes in patients with ACS. However, these biomarkers are not used as routine or inexpensive examinations for patients with ACS.

Increased platelet activation plays an important role in the initiation and progression of atherosclerosis [5]. Higher platelet counts may reflect increased platelet activation, which plays a pivotal role in megakaryocytic proliferation and produces relative thrombocytosis [6]. Platelets have been found to be involved in the development of atherosclerosis and ACS. In addition, low lymphocyte counts indicate a depressed immune response that is associated with adverse outcomes in cardiovascular (CV) disorders [7]. Therefore, an elevated platelet-to-lymphocyte ratio (PLR), for its low-cost, availability, and standard test at admission, might enhance microparticle, platelet monocyte, or neutrophil aggregate production, which would result in a state of activated haemostasis, which in turn would lead to an increased risk of adverse outcomes in ACS [8]. Recently, a growing body of evidence has shown that elevated PLR was associated with poor prognosis in patients with ACS. However, the results of these studies have been conflicting. Thus, we performed a meta-analysis of eligible studies to evaluate the association between PLR and all-cause mortality or CV events in patients with ACS.

This systematic review and meta-analysis was conducted in accordance with the Meta-Analysis of Observational Studies in Epidemiology Guidelines [9].

The inclusion criteria were as follows: (1) the study population consisted of patients with ACS, (2) description of risk estimates for the association between PLR and all-cause mortality or major adverse CV events (MACEs), (3) observational study with in-hospital outcomes and follow-up time > six months, and (4) the study included an available clinical database. The exclusion criteria were as follows: (1) the study design was a review, letter, case report, animal study, or non-English publication; (2) duplicate reporting; and (3) lack of follow-up outcome data.

The literature search and inclusion or exclusion decisions were independently performed by two investigators (H.L. and Y.Z.) by using a standardised approach. Any inconsistencies between these two investigators were settled by discussion with a third investigator (Y.M.) until a consensus was reached. A quality assessment of each selected study was conducted by two investigators (H.L. and Y.Z.) using the Newcastle–Ottawa Scale (NOS) [10]. The third reviewer (Y.M.) was consulted in the case of any uncertainties. The NOS uses two different tools for case-control and cohort studies and consists of three parameters of quality: selection, comparability, and exposure/outcome assessment. The NOS developed a “star system” (range 0–9) for the assessment of a maximum of four points for selection. A total score of ≥ 7 was used to indicate high-quality studies, and a total score ≤ 6 indicated low-quality studies.

The following basic information/data were extracted from studies that met the inclusion criteria: the name of the first author, year of publication, study design, country of first author, number of participants, age and sex of the target participant, disease site, intervention of patients, comparison of PLR, months of follow-up time, and end-points.

The meta-analysis and statistical analyses were performed using Stata software 12.0 (Stata Corporation, College Station, TX, USA) and Cochrane Review Manager software 5.3 (The Cochrane Collaboration, Oxford, UK). We performed separate meta-analyses for the eligible studies that reported the risk estimates by PLR categories or unit PLR. For the ﬁrst type of studies, we converted categories of PLR concentration to two standardised categories according to the study by Templeton et al. [see 11] (the cut-off PLR value for deﬁning risk groups was 150); namely, the low PLR group (the referent, PLR ≤ 150) and the high PLR group (PLR > 150). Analyses were performed for studies by using two groups to define high PLR vs. low PLR, and studies using three or more groups were assigned and summarised as two groups. The category-speciﬁc risk estimates of each study were assigned to the standardised categories according to the method by He et al. [3]. The pooled estimates were then used for the overall effect analysis. For the studies reporting the risk estimates by unit PLR, we pooled the standardised risk estimates (relative risk [RR] per unit of the natural logarithm of PLR).

The predictive value of PLR for clinical outcomes was presented as the RR with 95% confidence interval (CI). Cochran’s Q test and Higgins I2 statistic were calculated for heterogeneity detection. A p value < 0.1 and I2 value of < 50% were considered to be of no significant heterogeneity, and a fixed-effect model was used. We regarded an I2 value of < 25%, 25–50%, and > 50% as low, moderate, and high amounts of heterogeneity, respectively. Sensitivity analysis was used to investigate the influence of a single study on the overall risk estimate and was performed by sequentially omitting one study at a time. Publication bias was detected by using Egger’s regression intercept test. All hypothesis tests were two-sided. A p value < 0.10 was considered indicative of statistically significant heterogeneity, and all other p values were considered statistically significant at a value < 0.05 in two-sided tests.

From 299 potentially relevant citations ascertained from electronic databases and searches of reference lists, eight cohort studies involving 6627 patients with ACS finally met the inclusion criteria. A detailed description of the selected studies is presented in Figure 1. The basic characteristics of the individual studies are shown in Table 1, and clinical outcomes of the included studies are summarised in Table 2. Three of the included studies were prospective cohort studies, whereas the others were retrospective cohort studies. The total number of high PLR participants was 2383 (range 159–646), and the number of low PLR participants was 4242 (range 281–1292). The mean age and percentage of male patients in the high PLR group were higher than those of male patients in the low PLR group. The follow-up time ranged from 0 to 5.2 years. The number of stars assessed by the NOS for all studies was > 7, which indicated relatively high quality. Three of the studies reported the risk estimates by unit PLR; thus, we did not conduct a meta-analysis using unit PLR. 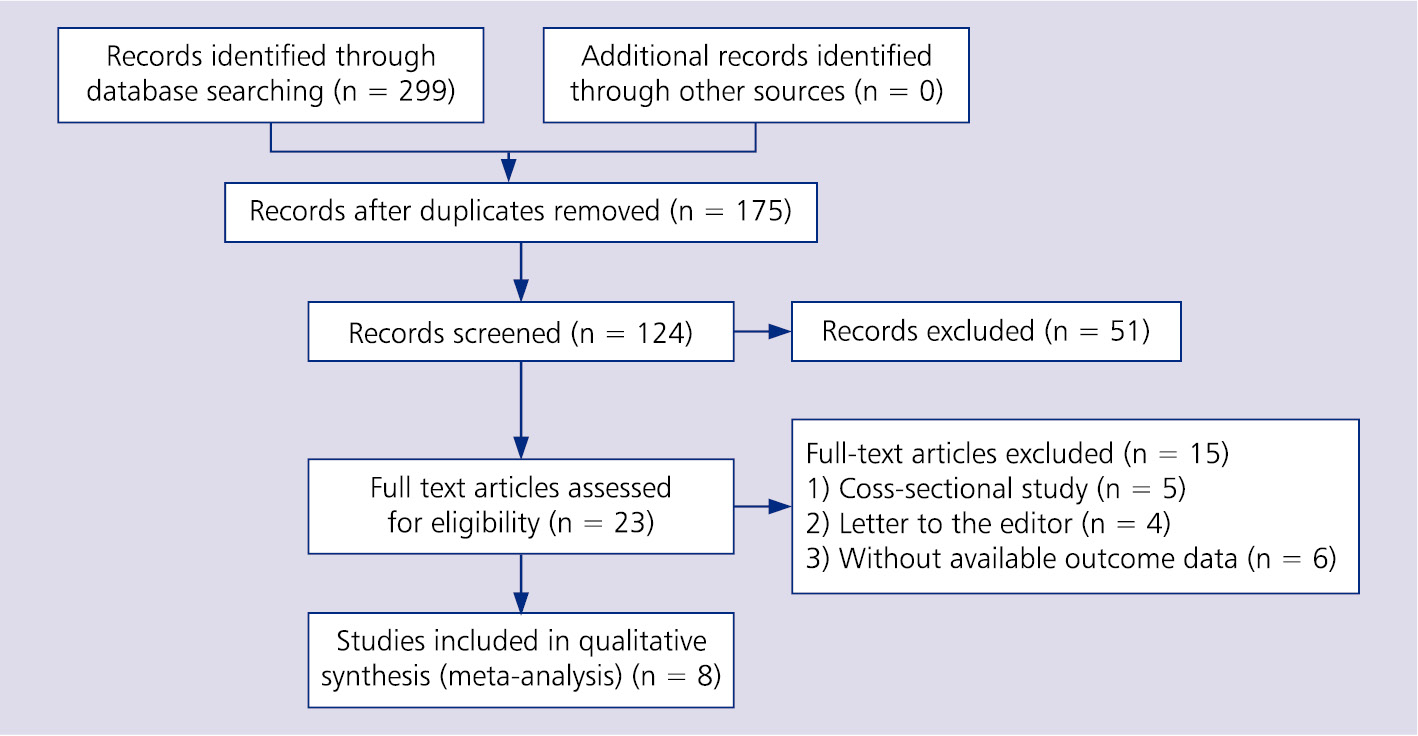 Table 1. Characteristics of included studies on the association between platelet-to-lymphocyte ratio (PLR) and of acute coronary syndrome (ACS) 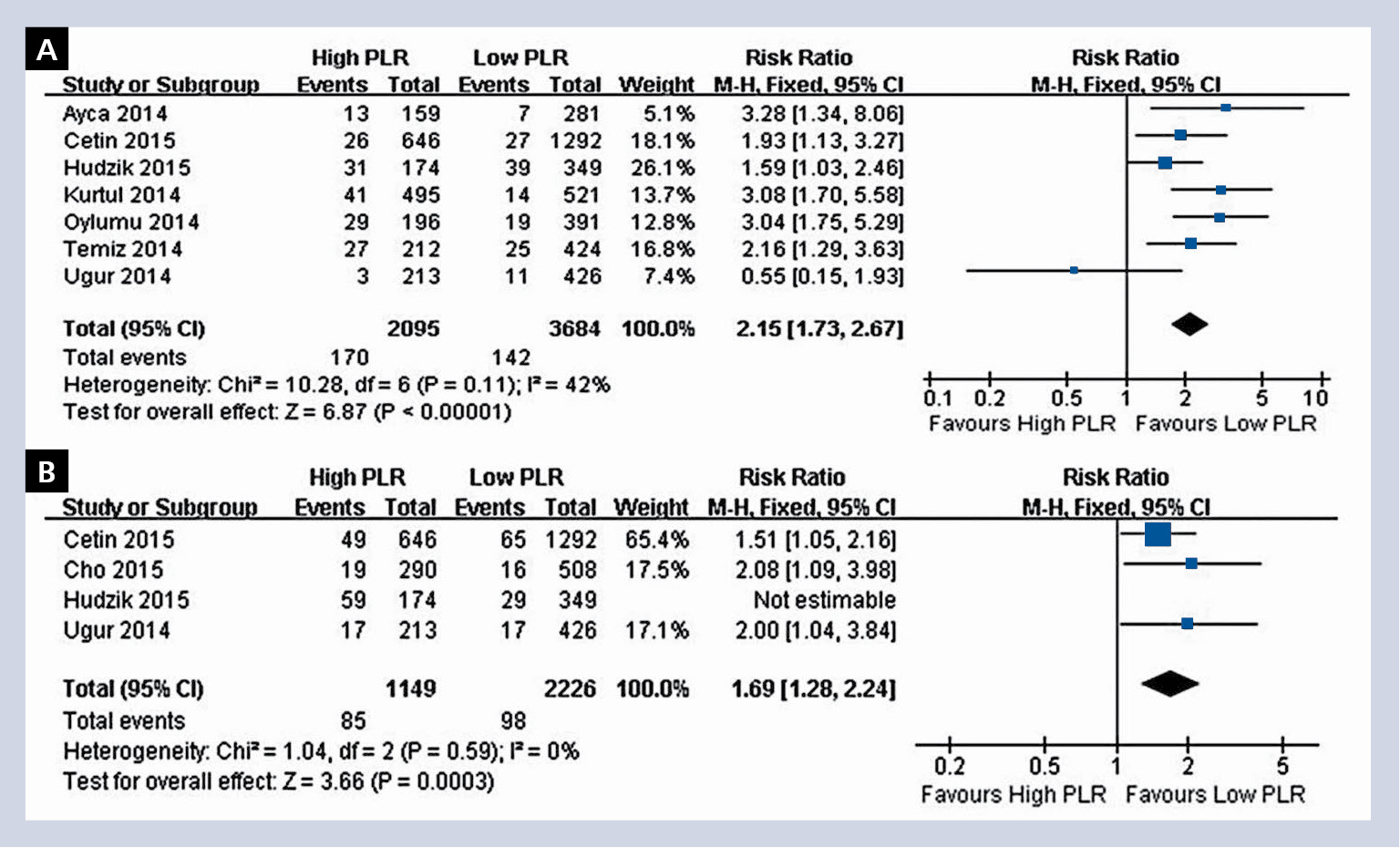 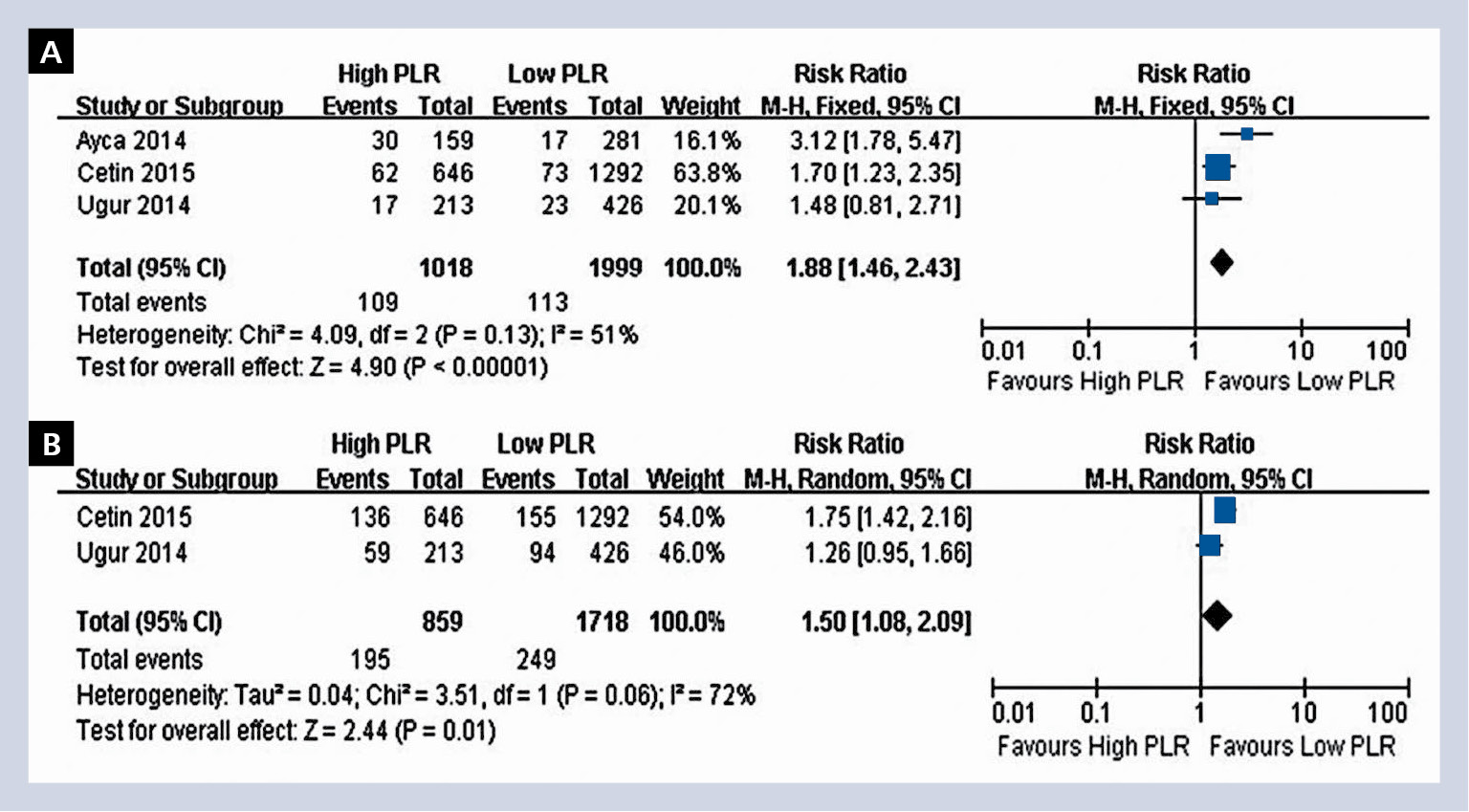 Subgroup analysis. We performed predefined subgroup analyses for sample size, study design, follow-up, and types of treatment to determine the origin of heterogeneity. In the subgroup with retrospective studies and duration of follow-up greater than one year, there was no significant heterogeneity among the studies (Table 3). Therefore, the study design and duration of follow-up was possibly the origin of the significant heterogeneity of the pooled data on long-term mortality in our meta-analysis.

Table 3. Subgroups analyses of the association between platelet-to-lymphocyte ratio and mortality of acute coronary syndrome

This systematic review and meta-analysis drawn from eight studies involving 6627 participants demonstrated that elevated PLR level was associated with in-hospital and long-term all-cause mortality and CV events in patients with ACS. ACS patients with high PLR had an increased risk of death and adverse events relative to the ACS patients with low PLR. PLR may be a good marker of preliminary risk stratification for patients with ACS at admission.

Previous studies regarding the impact of elevated PLR on outcomes of patients with ACS have shown inconsistent results. Ugur et al. [8] conducted a large prospective study and found that PLR was a marker of inflammatory and prothrombotic status and could predict in-hospital (odds ratio [OR] 1.634; 95% CI 1.240–2.153; p = 0.007) and long-term MACEs (OR 1.428; 95% CI 1.107–1.842; p = 0.006] in 1938 patients with STEMI after adjusting for confounding factors by multivariate logistic regression analysis. Cho et al. [18] reported that PLR > 128 (hazard ratio [HR] 2.372; 95% CI 1.305–3.191; p = 0.005) was an independent predictor of long-term (62.8 months) adverse events among NSTEMI patients who had undergone percutaneous coronary intervention after adjusting for CV risk factors. However, other studies have shown that high PLR (> 124) was not associated with in-hospital mortality and long-term MACEs among ACS participants [13]. In our meta-analysis, by pooling the results of all studies, we found that elevated PLR was associated with increased risk of in-hospital and long-term CV events in patients with ACS [16].

The exact mechanism underlying the adverse outcomes associated with high PLR in patients with ACS was not clear. It has been shown that PLR was related to increased inflammatory activity and aggravated pro-thrombotic status due to megakaryocytic proliferation and relative thrombocytosis in high-risk patients with ACS [19–21]. Therefore, high platelet counts have been shown to reflect platelet activation and contribute to development of no-reflow via microvascular plugging, thrombus formation, and vasoconstriction [22, 23]. In addition, lymphocytes have been shown to be a significant part of chronic inflammation in atherosclerotic process and to infiltrate the ischaemic and reperfused myocardium during ACS [24, 25]. Lower lymphocyte counts caused by increased cortisol as a response to physiological stress have been shown to be associated with poor clinical outcomes in patients with ACS [14]. Thus, PLR, which is derived from the numbers of platelets and lymphocytes, may be a novel indicator of inflammatory and pro-thrombotic status and could potentially be used as both an in-hospital and long-term prognostic indicator for ACS.

Sensitivity analysis confirmed the reliability and stability of this meta-analysis. Significant between-study heterogeneity was observed in the long-term mortality and MACEs. Subgroup analyses were used to explore potential heterogeneity sources. Subgroup analysis showed that study design and duration of follow-up were associated with heterogeneity. Data from all of the included studies reported non-adjusted risks, so the confounding factors in the studies may have been potential heterogeneity sources. In addition, sensitivity analysis showed that between-study heterogeneity with respect to both long-term mortality and MACEs decreased significantly after excluding one study. The pooled data for PLR and poor outcomes of ACS should be interpreted with caution until our results can be confirmed by future large studies.

Our analysis had several limitations that should be considered when interpreting our findings. First, the meta-analysis included a limited number of eligible studies, which made it more difﬁcult to detect the heterogeneity between studies, especially long-term outcomes. Second, few of the articles reported the risks of PLR-associated end-points by unit PLR. The results of these studies could not be pooled with those obtained by PLR categories. Third, we did not use adjusted RR to estimate the risk of poor prognosis for ACS patients with high PLR relative to that for ACS patients with low PLR in this meta-analysis. Finally, the cut-off points of each PLR quintile were not different, which might have increased the risk of misclassiﬁcation.

In conclusion, this meta-analysis showed that high PLR was an independent factor associated with all-cause mortality and CV events in patients with ACS. PLR, as a readily available and inexpensive thrombi-inflammatory biomarker, may be useful for stratification of high-risk patients with ACS in a clinical setting. Further studies are required to assess the association between PLR and poor outcomes in patients with ACS.