The study of prognostic factors of life-threatening tachyarrhythmias and closely related sudden cardiac death (SCD) remains a cornerstone issue in cardiology today. About 80% of SCD cases result from ischaemic heart disease, including 65% of cases due to acute coronary flow disorders, and 20% of SCDs are of non-coronary origin, including dilated cardiomyopathy (DCM), arrhythmogenic right ventricular dysplasia, hypertrophic cardiomyopathy, isolated left ventricular (LV) myocardial non-compaction, and genetically determined ion channel dysfunctions. The predominant mechanisms responsible for the circulatory arrest include heart rhythm disturbance with ventricular tachyarrhythmias (VTA) that is approximately 90% of SCD cases. Therefore, it is not unexpected that prognostic risk stratification models result from multifaceted randomised trials combined with the results obtained from meta-analyses of known, and a variety of new, risk factors of SCD and VTA [1–5]. The principal limitation of such prognostic models is that they are population and not individual based.

Markers functionally associated with the life-threatening arrhythmias reflect myocardial electrical instability. They include microvolt T-wave alternans, QT/JT interval dispersion, heart rate turbulence, fragmented QRS, heart rhythm acceleration/deceleration, early repolarisation syndrome, etc. The above-mentioned electrocardiogram (ECG) markers reflect heterogeneity of processes of myocardial de- and repolarisation, and vegetative dysfunction. Individually, they have a certain prognostic significance related to life-threatening VTA and SCD [6–10]. Prognostic properties of ECG myocardial electrical instability markers are based on the use of the non-linear dynamics method, which is not yet medically standardised and is more suitable for the analysis of complex dynamic objects such as human cardiovascular system rather than conventional statistical methods [11].

In the presence of some nosological condition, the identification of subjects with high risk of cardiovascular events, and the selection of the most adequate treatment strategy including surgery, is a key factor. However, the potential of myocardial electrical instability markers to resolve this issue has not been fully studied; this is especially true for patients with chronic heart failure (CHF) and decreased LV ejection fraction (EF).

The purpose of the present study was to develop a mathematical model of individualised risk stratification of life-threatening VTA in patients with CHF using a combination of myocardial electrical instability markers.

The analysis of ECG markers of myocardial electrical instability was performed. A microvolt T-wave alternans (mTWA), which reflects myocardial repolarisation temporary heterogeneity of myocardial repolarisation processes, was measured in accordance with international standards [12]. In the presence of mTWA > 47 mcV, alternans was considered high. The spatial heterogeneity of myocardial repolarisation processes was assessed using QT interval duration/dispersion (QT and dQT) [13]. In the presence of dQT > 70 ms, dispersion was considered high. Heart rate turbulence (HRT) evaluates dysfunction of the baroreceptor control of haemodynamics, and was assessed in accordance with the standards developed by the Working Group and edited by Bauer et al. [14]. If turbulence onset (TO) was > 0% and/or the turbulence slope (TS) was < 2.5 ms/RR, HRT was considered abnormal. To define vegetative dysfunction, heart rhythm acceleration/deceleration (AC/DC) using standard methods was applied [15]. In cases when DC < 4.5 ms, vagal dysfunction was registered. The original ‘Intecard 77’ software was applied (Centre of Cardiology, Belarus).

The events of SCD or paroxysmal sustained ventricular tachycardia/ventricular fibrillation (VT/VF) based on HM-ECG and implantable device interrogation or episodes of device shock therapy of ventricular tachyarrhythmia (ICD, CPT-D) were chosen as the primary endpoints.

Discriminators Y1 and Y2 are calculated as follows:

Y1 > Y2 suggests that the risk of life-threatening VTAs is high, whereas Y2 > Y1 suggests that it is low. Such preliminary ECG-screening of the risk is feasible at each visit of a CHF patient and during the follow-up period.

Table 3. Results obtained from the analysis of primary endpoints in Cox regression model

As a result, we can use Cox model proportional hazard to assess the probability (P) of the SCD/VTA risk stratification: 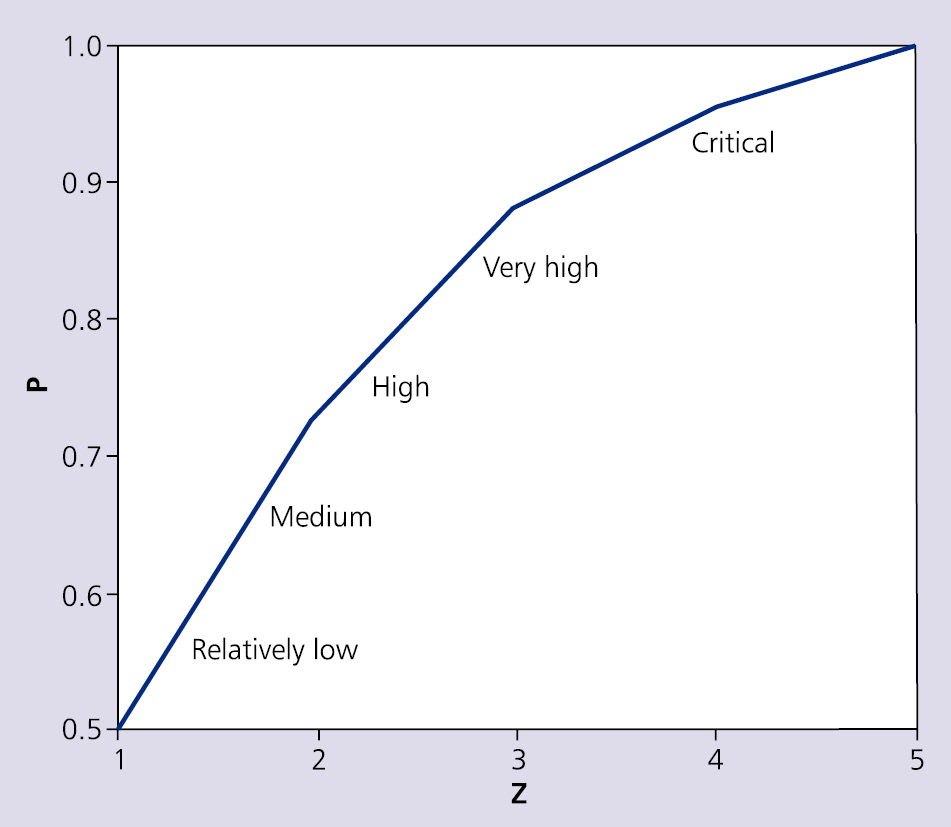 Therefore, the robust prognostic significance of Cox logistic regression for VTA risk stratification allowed inclusion of the method into the diagnosis algorithm of subsequent assessment of risk for life-threatening arrhythmias. The algorithm shown in Figure 2 is a two-step approach to stratify the risk: 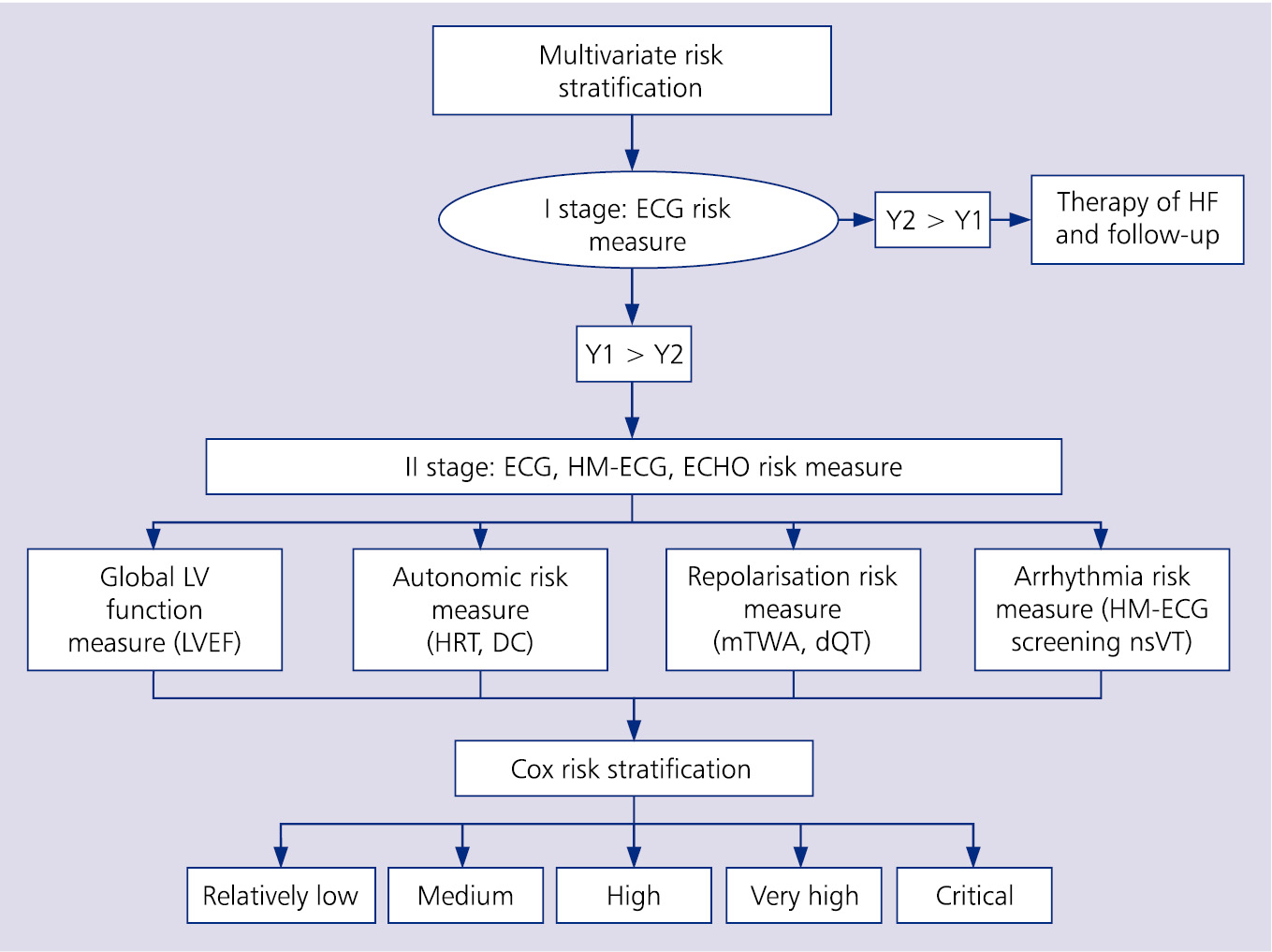 In multiple randomised multicentre trials, the search for a unified index was made for the reliable prediction of VTA/SCD risk, but it produced no results. For more than two decades, severe LV dysfunction has been used as a criterion and key prognostic marker of SCD in a variety of prospective randomised trials [13–16]. However, Dagres and Hindrics [17] showed that six from seven SCD cases are registered in individuals with normal or moderately reduced LVEF, and vice versa, in subjects with LVEF < 30%, who received implantable ICD, shock therapy charges are frequently not established. 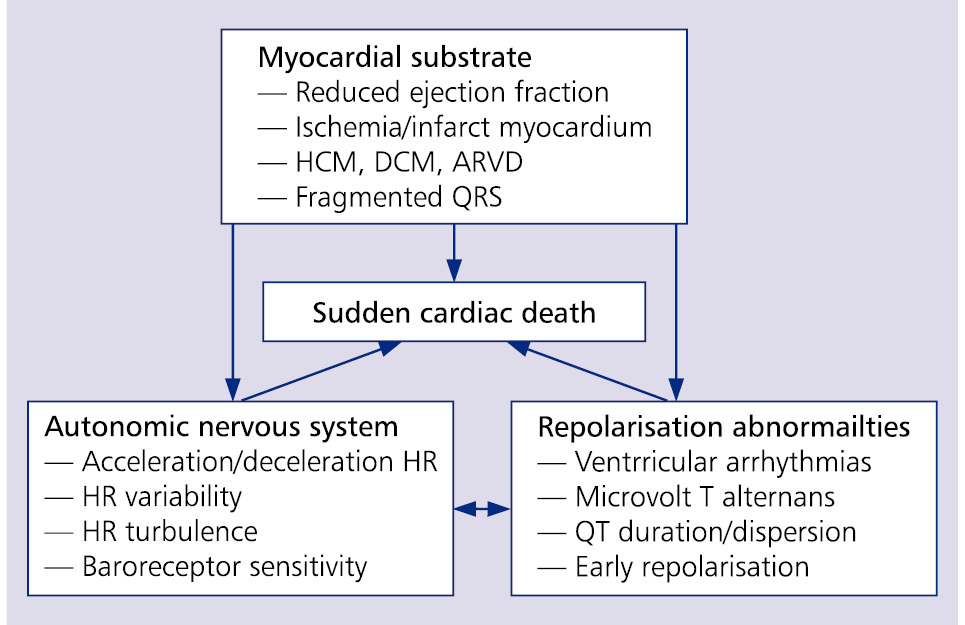 A comprehensive assessment of the underlying mechanisms of the dysfunction forming the individual risk of SCD may be reliable in determining the ‘weak spot’ in the pathologic matrix of the disease. This is especially true in CHF patients with reduced EF. The above-mentioned model to stratify risk facilitates decision-making regarding ICD implantation. On the one hand, the model helps to identify patients with high risk of SCD requiring preventive ICD implantation, and on the other hand, the patients who will not benefit from the ICD, but rather, it would reduce patients’ life quality and demand substantial financial expenditure [18]. This has been shown by a highly informative negative myocardial electrical instability marker test (99%).

The authors declare that the study was mono-centre, non-randomised, and limited by inclusion of CHF patients only. In addition, exclusion criteria are atrial fibrillation and ventricular pacing because mTWA, AC/DC cannot be measured in these conditions. More trials are needed to test the given technology for risk stratification, not only in respect to CHF nosology but also on a population level.

It is expected that the proposed mechanism to assess the risk of life-threatening VTAs using fourth-generation digital electrocardiography and tests of myocardial electrical instability markers, as well as HM-ECG and ECHO, will be extensively used in clinical practice.