Frequent premature ventricular complexes (PVCs) are one of the major causes of reversible cardiomyopathy [1–3]. Tachycardia induced cardiomyopathy belongs to the acquired dilative cardiomyopathies and requires exclusion of other underlying disorders and observation of left ventricle (LV) functional improvement after achievement of arrhythmia control for diagnosis [1–3].

Frequent PVCs significantly influence the patient’s quality of life. Idiopathic PVCs in patients without structural heart disease (SHD) are usually considered benign [1–3]. Successful elimination of the PVCs, either by radiofrequency (RF), catheter ablation, or antiarrhythmic drugs, may improve or even normalise LV systolic function [3–9]. This retrospective study was done to assess the predictors of improvement of LV function in patients with frequent PVCs.

A total of 109 consecutive patients (62 men; mean age 56 ± 17 years) who were referred for catheter ablation of symptomatic frequent PVCs refractory to medical therapy, including beta-blockers and calcium channel blockers, and patients with subsequent LV dysfunction between January 2009 and December 2010, were included in this study. The patients with sustained ventricular tachycardia were excluded. Frequent PVCs were defined as PVC burden > 10,000/day during 24-h Holter monitoring. 24-h Holter monitoring was performed in all the patients before and 3–6 months after the ablation procedure. An effective RF ablation was defined as a procedure resulting in a reduction of the PVC burden by > 80%. SHD was ruled out by echocardiography, magnetic resonance imaging, cardiac catheterisation, or stress testing. Table 1 presents the baseline patients’ characteristics (number, sex, LV dimensions, and function, as well as PVC burden) in group A with idiopathic PVCs and group B with underlying SHD. Sixty-five (59.6%) patients had underlying SHD (dilated cardiomyopathy: 29; ischaemic heart disease: 17; cardiac surgery due to valvular heart disease: 7; myocarditis: 2; arrhythmogenic right ventricular cardiomyopathy: 5; long QT syndrome: 3; cardiac surgery for ventricular septal defect: 1; and systemic sclerosis: 1).

Echocardiography was performed before ablation and 3–6 months after the procedure (Fig. 1). Assessment of LV ejection fraction (LVEF) was performed using the Simpson method. Each echocardiography was analysed by two independent observers. To assess the LVEF parameter we used the second sinus beat of two consecutive sinus beats to avoid post-PVC overestimation of LV function. LVEF < 50% was defined as abnormal. The definition of dilated LV used in the study was the end-systolic dimension of the LV > 38 mm and end-diastolic dimension > 58 mm. Example echocardiographic results are presented in Figure 2. 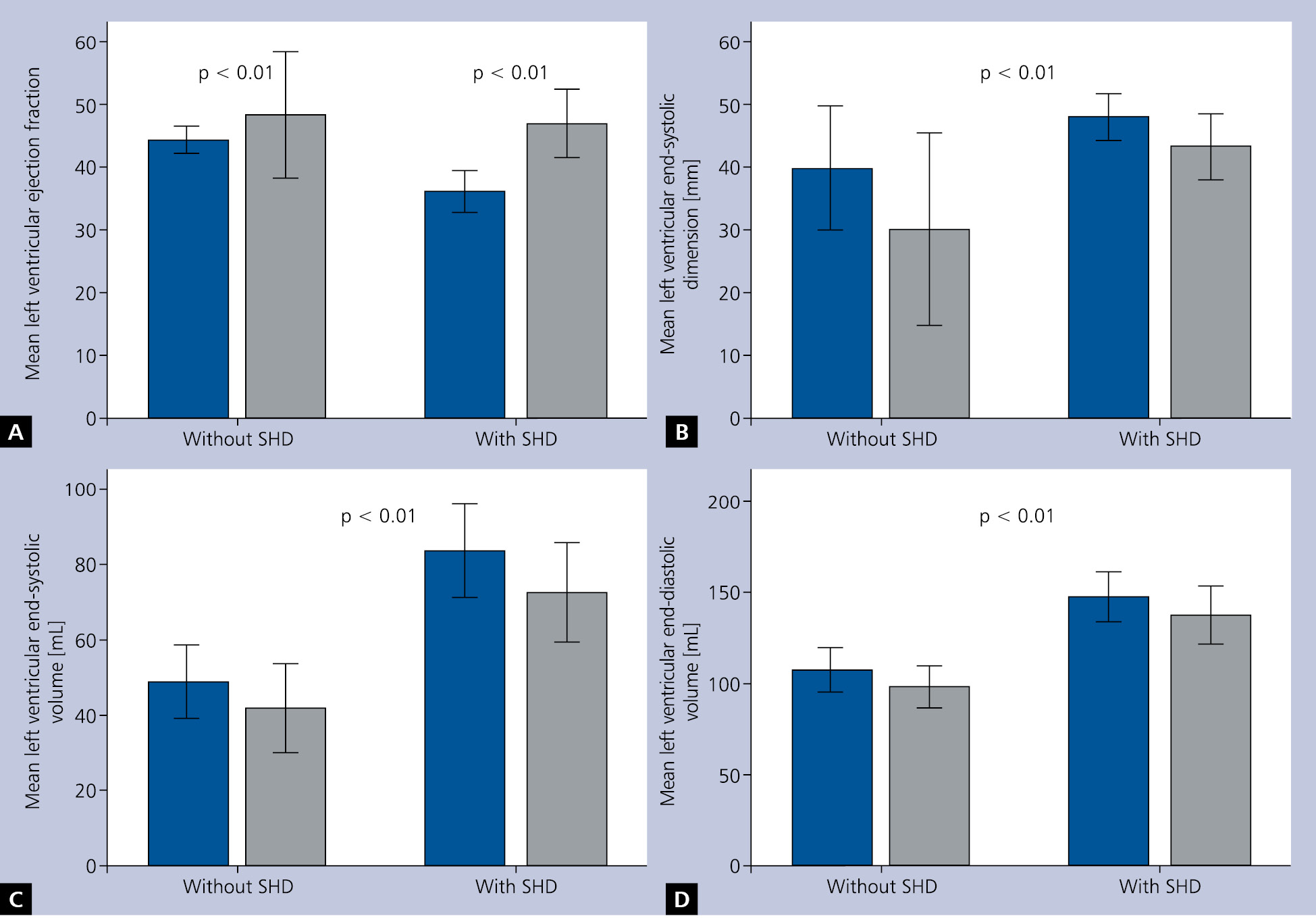 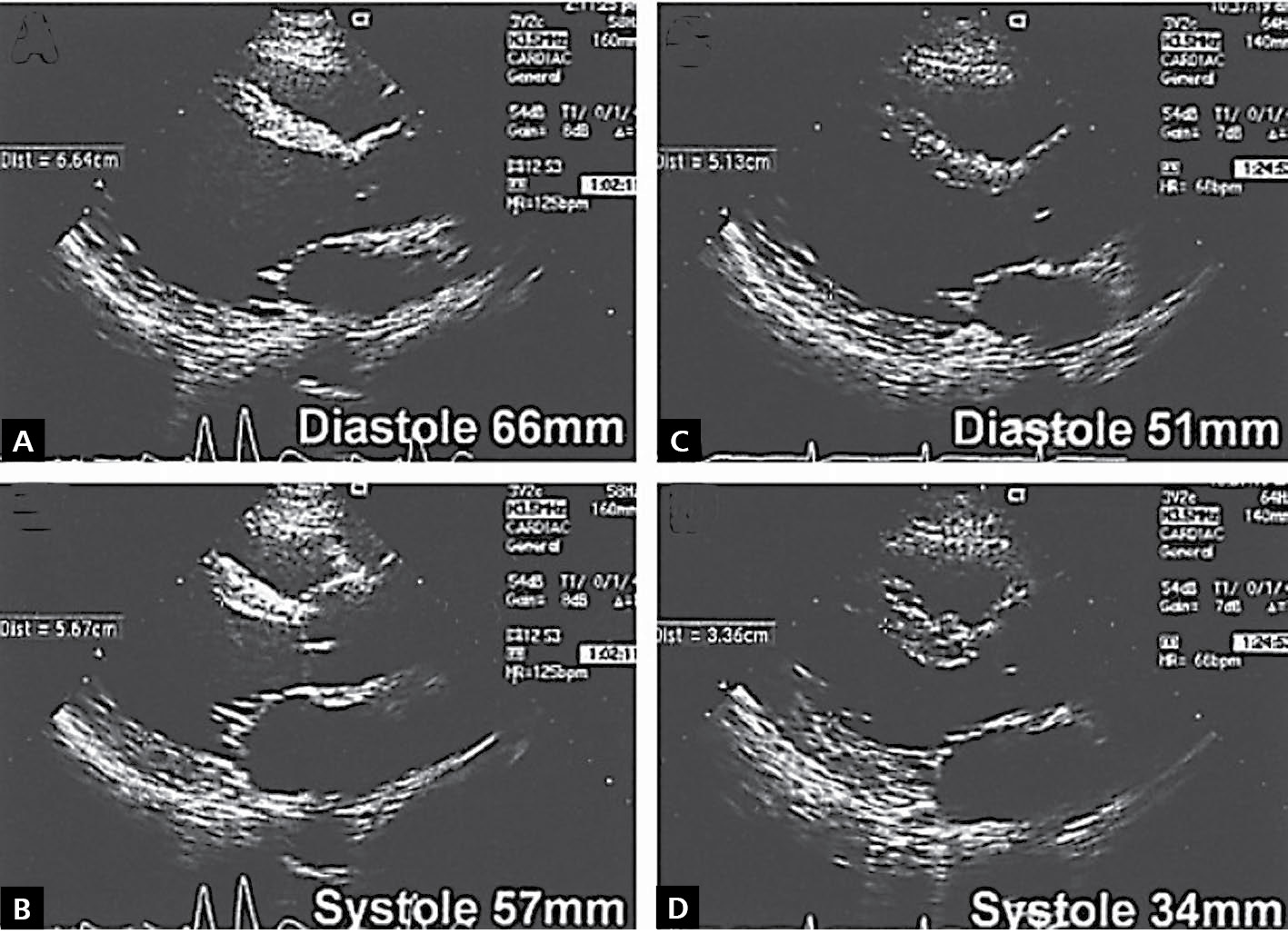 The optimum ablation site was determined by activation and/or pace-mapping as described earlier in detail [10, 11]. The site of origin was defined as the earliest site of the local activation time and from which the best pace-mapping score was obtained. After the catheter ablation, orciprenaline sulphate (Alupent®, Boehringer-Ingelhem Pharma GmbH, Ingelheim am Rhein, Germany) was used to re-induce the PVCs.

Variables are expressed as mean ± standard deviation (or standard error of mean), and percentage. Differences in frequency of characteristics were assessed by independent sample t-test for continuous variables. For discrete variables χ2 statistics (or Fisher’s exact test if applicable) were used. For non-discrete variables, we used Wilcoxon’s and Shapiro-Wilk’s tests. Predictors of LV function improvement were determined by binary multiple logistic regressions and all the variables with p < 0.3 in bivariable analysis were included in the final model. A two-tailed p-value < 0.05 was considered statistically significant. We used SPSS® 13.0 (SPSS Inc., Chicago, USA) for data storage and analysis.

Sixty-five (59.6%) patients had underlying SHD (Table 1). Twenty-six (24%) patients had an implantable cardioverter-defibrillator. Bivariate analysis showed that male gender (p = 0.0001), the presence of SHD (p = 0.001), but not PVC burden (p > 0.05) were associated with LV dysfunction before the catheter ablation procedure. PVCs originated from the right and LV outflow tracts in 50 (46%) and 31 (28%) patients, respectively.

Ablation of frequent PVCs was successful in 94 (85.4%) patients after a single catheter ablation procedure (88.6% and 83.1% in patients without and with underlying SHD, respectively; p = 0.42), with mean PVC burden reduction of 93% ± 11% (92 ± 10% and 90 ± 17% in patients without and with SHD; p = 0.52). Three patients experienced complete atrioventricular block due to ablation at high LV septum. One patient died six months after ablation due to exacerbation of heart failure.

Figure 3. Echocardiographic parameters before and after ablation. The figure shows the change in mean left ventricular ejection fraction (LVEF) in all the patients before and after radiofrequency ablation treatment (A) and in the subgroups with LVEF < 50% and LVEF > 50% (B), respectively.

Tachycardia-induced cardiomyopathy (TIC) is LV dysfunction resulting from cardiac arrhythmia in the absence of concomitant SHD, which is completely or partially reversible after normalisation of cardiac rhythm [3]. Fenelon et al. [12] showed that arrhythmia duration exceeding 10% of the day is the cut-off burden of arrhythmia for TIC. They also defined the additional group of “mixed” TIC, who experience improvement of LV function after successful restoration of normal cardiac rhythm despite the presence of concomitant SHD [12]. However, the median LVEF improvement was more prominent in patients with pure TIC (ΔLVEF > 15%) compared to those with mixed TIC (ΔLVEF > 5%) [13]. The mean improvement of LV function in our patients was 8.3% ± 1.8%.

Baman et al. [14] intended to determine a cut-off PVC burden that could result in PVC-induced cardiomyopathy. The authors determined PVC burden in a group of 174 patients with idiopathic PVC with 24-h Holter monitoring. A reduced LVEF was present in 57 (33%) patients. In multivariate analysis, PVC burden > 24% (OR: 1.12; p < 0.01) was independently associated with PVC-induced cardiomyopathy [14]. Higher PVC burden (> 26%/day) with 70% sensitivity and 78% specificity was an independent marker of PVC-mediated LV dysfunction in a study by Ban et al. [15]. Yokokawa et al. [16] studied 241 patients with frequent PVCs, who were referred for catheter ablation. 180 (75%) patients experienced symptoms and 61 (25%) were asymptomatic. LV dysfunction was present in 76 (32%) patients. Symptom duration of 30 to 60 months, symptom duration > 60 months, the absence of symptoms, and PVC burden in asymptomatic patients were independent predictors of impaired LV function [16]. The 10,000 extra beats per day was the cut-off in Sekiguchi’s group study investigating the haemodynamic effects of PVCs in relation to LV dimensions and serum B-type natriuretic peptide level, which appeared to improve after RF catheter ablation [17]. Baseline PVC burden of 13% (100% sensitivity and 85% specificity) predicted more than a 5% increase in LVEF after sustained successful ablation in 80 patients assessed by Panela et al. [18]. The studies mentioned above showed that high PVC burden is associated with impaired LV function before catheter ablation. Our study showed that PVC burden is associated not only with LV dysfunction before catheter ablation but also predicts the improvement of LVEF 3–6 months after the catheter ablation procedure.

In multivariate analysis, epicardial PVC focus was associated with the delayed recovery of LVEF in patients with LV dysfunction [19]. In a recently published study by Sadron Blaye-Felice et al. [20] the PVC burden, epicardial origin, or lack of palpitations were independent factors identifying patients with tachycardiomyopathy. Nevertheless, improvement of LV function, after complete PVC elimination, was not associated with the arrhythmia origin in a different study performed by Mountantonakis et al. [21]. This was also the case in our study.

Recently, an interesting analysis was performed by Doygu Bas et al. [22], showing that patients with PVC-induced cardiomyopathy have a lower degree of PVC variability during the 24-h time in comparison to patients who do not develop cardiomyopathy. Daily variability of PVC may account for even 20% difference; however, those variances in short periods of time may not significantly influence general change in ejection fraction after ablation in a 3–6-month period [22].

According to the current European Society of Cardiology 2015 guidelines, frequent PVCs in patients with SHD increase the mortality rate. In symptomatic PVC patients, as well as, TIC catheter ablation and amiodarone are class II a indication. PVC burden exceeding 24% daily in patients with LV dysfunction suggests PVC-induced cardiomyopathy. Catheter ablation in such a group may restore LV function [23].

Unfortunately, our study design was retrospective. This might not sufficiently assess the success rate and LV recovery; however, it could present some trends and differences of clinical significance.

High PVC burden, i.e. > 20,000 PVC/day, predicts improvement of LVEF after successful catheter ablation. Compared to patients with < 20,000 PVC/day, they had 3.5 times greater odds of improvement of LV function within six months after RF catheter ablation (OR: 3.53; 95% CI: 1.15–10.75; p = 0.023). Age, gender, presence of SHD, baseline LVEF (in patients with LVEF < 50%), and site of origin did not predict improvement of LV function. Catheter ablation should be considered as the first-line therapy in all patients with PVC > 20,000/day and LV dysfunction [24]. Still, there are many unclear aspects of tachycardiomyopathy treatment in the prevention of structural changes and long-term risk of sudden cardiac death, which necessitate further exploration [25, 26].