Left ventricular (LV) dysfunction and failure causes an increase in LV filling pressure and is responsible for the rise in left atrial pressure and in pulmonary venous and arterial bed. The mean pulmonary artery pressure (mPAP) is closely related to pulmonary capillary wedge pressure (PCWP), left atrial pressure, and with LV filling pressure in patients with LV heart failure (HF). Elevated PCWP can cause remodelling of the pulmonary vascular bed. Arterialisation of pulmonary veins is the first step to reactive pulmonary hypertension (reactive PH) with further structural changes of pulmonary arteries [1–4].

Increased pulmonary vascular resistance (PVR) and increased transpulmonary gradient (TPG) are the result of reactive PH and have an influence on the morbidity and mortality of patients with HF [3–9]. Pulmonary hypertension (PH) is recognised in 50–60% of patients referred for heart transplantation (HTx) and has, according to some authors, a significant influence on patient’s prognosis. Contrary to that, some authors have reported that patients with chronic HF have poor prognosis and that PH has no further influence on prognosis at this stage of disease [9, 10].

Patients with chronic HF listed for HTx are a highly selected population because of the strict qualification/disqualification criteria. PH and elevated PVR are considered as a relative contraindication when there is no response to “vasodilator challenge”. Nevertheless, numerous studies have shown that this model of PH (reversible) is associated with worse prognosis [10].

The main aim of the study was to assess the prognostic value of reactive PH (reversible) in patients with chronic HF waiting for HTx in comparison with the rest of the qualified patients (with no PH and with passive PH).

The results could improve allocation criteria to HTx among patients listed for elective transplantation.

Within five years (2003–2007) 658 patients with chronic HF according to the United Network for Organ Sharing (UNOS-2) were listed for HTx in Poland and were included into the registry. The average period of observation was 601 days (1–1462 days). All patients underwent standard evaluation including right heart catheterisation [11]. Further analysis concerned only those in whom the complete right heart haemodynamic protocol was reported (522 patients; 79.3%). Apart form the haemodynamic measurements (mPAP, PCWP, TPG, PVR), precise clinical, echocardiographic, electrocardiographic and biochemical assessments (including N-terminal pro B-type natriuretic peptide [NT-proBNP], and high-sensitivity C-reactive protein [hs-CRP]) were performed.

The endpoint of the study was all-cause death. Heart transplantation, elective or urgent, was considered as an end of the follow-up. All patients were followed up and treated with optimal doses of angiotensin converting enzyme inhibitors, beta-blockers, and diuretics by cardiologists in the Heart Failure and Transplantology Departments in four participating transplantology centres in Poland and appropriate outpatient’s clinics.

Informed consent was obtained from each patient participating in the study, according to the protocol approved by the Local Ethics Committee. The investigation conformed to the principles outlined in the Declaration of Helsinki.

The results presented are part of the national POL­KARD-HF programme (gov.no.NCT 00690157).

All calculations were performed with SAS version 9.2 software. Continuous data are reported as mean ± standard deviation. In the case of a skewed distribution the median with the range is presented. Differences between groups for continuous data were tested with nonparametric analysis of variance by the Kruskal-Wallis test. Differences between groups for proportions were tested with the χ2 test. Since both cardiac variables (hs-CRP and NT-proBNP) are not normally distributed, these variables were transformed logarithmically to meet the assumptions for linear regression analysis. Cardiac survival was estimated with the Kaplan-Meier method; differences were tested with log rank test — the endpoint of the study was all-cause death, the end of observation (censored) — HTx urgent or elective. Univariable and multivariable Cox-regression analyses were performed to investigate the association of pre-measurements with incidents of death. Independent variables in multivariable analysis were selected by stepwise option.

For all analyses, a two-sided p-value < 0.05 was considered to indicate statistical significance.

Table 1. Characteristics of all the patients 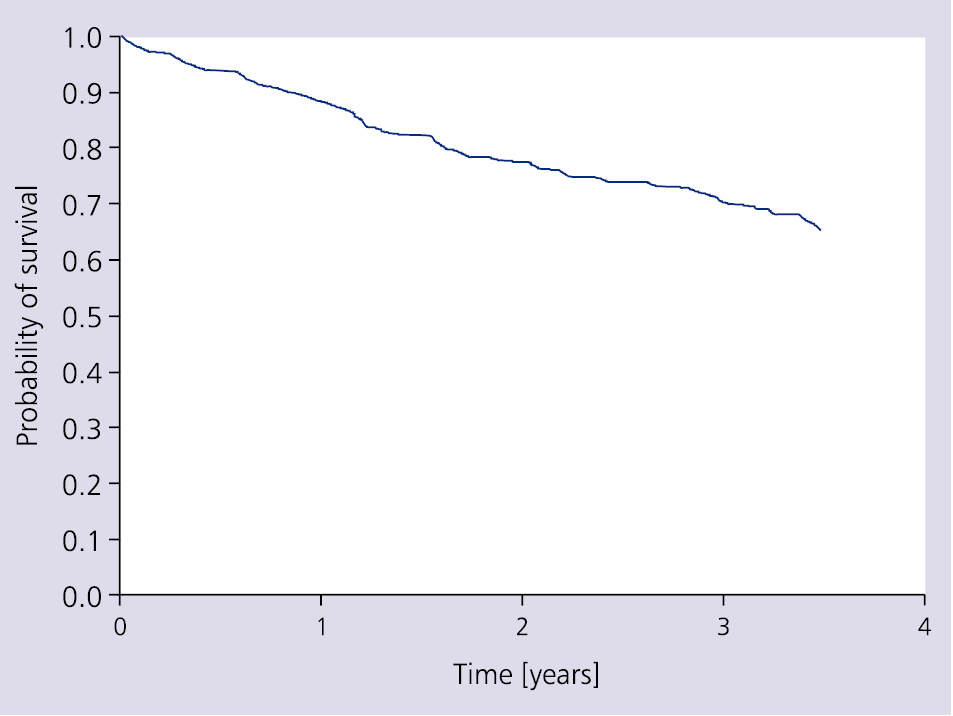 Figure 1. Probability of survival in patients with chronic heart failure — all group

This was the oldest group as compared with the others — either passive or reactive PH.

Table 3. Characteristics of patients according to pulmonary hypertension subgroups 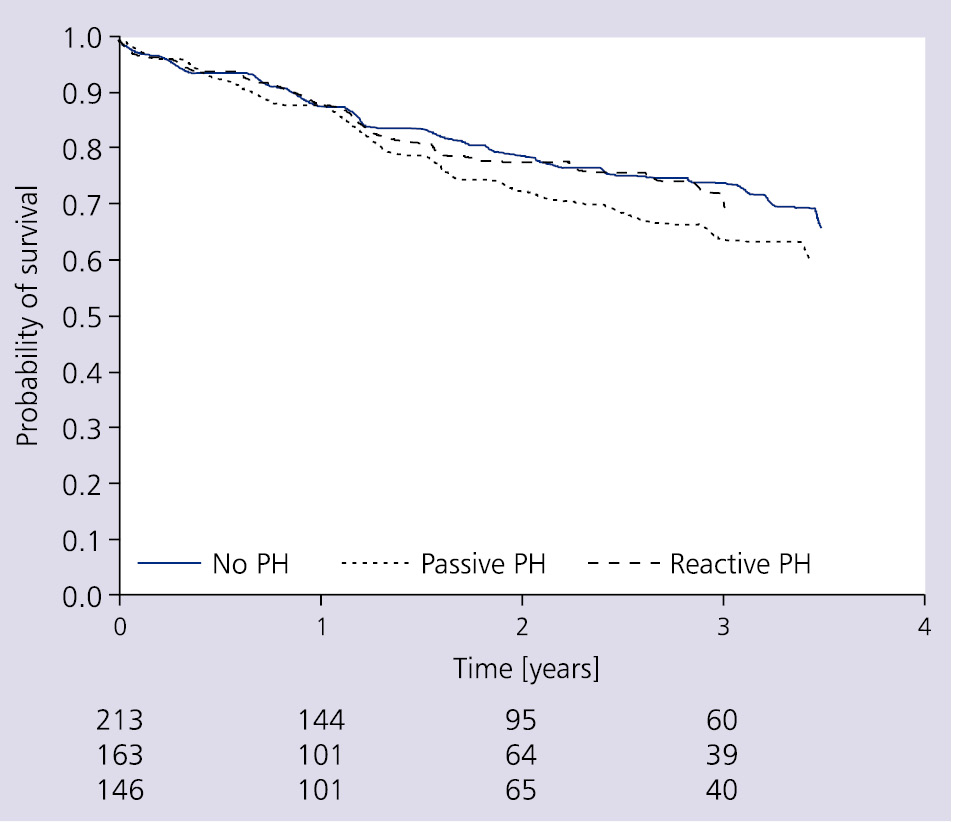 Characteristics and prognosis of patients with passive PH

Characteristics and prognosis of patients with reactive PH

The prognosis of patients with reactive PH (Kaplan-Meier method) was comparable with patients with no or with passive PH (Fig. 2).

There are varied opinions concerning the influence of PH on the prognosis of patients who are candidates for HTx. Some authors have reported that patients with HF qualified for HTx have poor survival and that PH has no additive influence on their prognosis [2, 9, 12, 13].

The main aim of our study was to assess the prognostic value of reactive PH in ambulatory patients waiting for HTx. That is a group of patients in whom functional as well as structural changes in pulmonary circulation can be suspected [5–9].

Structural changes in venous and arterial pulmonary circulation are secondary to elevated LV filling pressure, and decreased left atrial and pulmonary vein compliance. Such structural consequences are well known in mitral stenosis, but there are few papers focused on such changes in patients with advanced HF [14–17]. In both models the rise of pressure in pulmonary circulation leads to certain changes in the function and morphology of arteries and veins. There are selected publications taking into account the problems above. Some of them underline that patients with higher levels of pre HTx PAP have a residual PH even three years after transplantation, suggesting the presence of structural changes [14, 18]. There are also some suggestions that PH referred to as “fixed” because of little or no reversibility with pharmacological tests or treatments before HTx, represents a major risk factor for prognosis after HTx, because of structural vascular remodelling. Delgado described advanced changes in media thickness assessed after HTx in a group of patients with reactive PH as compared to structural changes among those with passive PH [19]. A similar pathology was described by Hasleton and Brooks [20]. Khush et al. [9], using comparable methods to describe patients with mixed (reactive) PH, proved that this kind of PH was common in patients with HF but did not predict poor short-term clinical outcomes. They underlined that patients with advanced HF in NYHA class IV generally had poor prognosis, and PH or no PH was no longer a significant prognostic factor.

Remodelling of pulmonary vasculature could be assessed taking into account the difference between diastolic PAP and PCWP when PVR is known. According to Engelberg and Dubios [21], experimental findings show that the difference (diastolic pulmonary gradient) could be used to assess diastolic PAP compliance. Tedford et al. [22], using the UNOS database, selected patients with PH (mPAP ≥ 25 mm Hg). Diastolic pulmonary gradient has no effect on patient’s survival until five years after HTx, irrespective of TPG and PVR. The authors underlined that TPG is independent of cardiac output and so better reflects vascular compliance than PVR alone [22]. Results of Tedford extended our findings concerning prognosis of patients with PH after HTx. There is also important information (not published) that, irrespective of vasodilator testing for reversibility of PH, there is no difference in six-month survival (21% vs. 22%) between those with or without reactive PH [9]. Among patients with advanced HF and PH, right ventricular function significantly influences their prognosis, but right ventricular dysfunction with normal PAP poses no additional risk [23, 24]. Aronson et al. [5], whose methodology describing PH was used in our study, found significant differences in prognosis between patients with reactive PH as compared to patients with no PH or passive PH. It should be underlined that the population of patients with HF was different. They were patients with acute HF included in a randomised trial, so the patients and the way of assessing the results were different. The authors estimated survival according to post-treatment PH categories. In a retrospective analysis, when PH was assessed before treatment, the survival of compared groups was nearly identical [5] and comparable to ours. Our registry covered a homogenous cohort of patients with chronic HF listed for elective HTx. There were patients treated according to the guidelines by appropriate in- and outpatient departments.

The most intriguing finding of our study was that the survival of patients with reactive PH, who met the criteria of reversibility, was comparable with patients with no PH or passive PH.

The results of the study were based on the data taken from the national registry of patients listed for HTx. The measurements of pulmonary haemodynamicity were not standardised; moreover, there were no available data concerning PH reversibility. Because of a necessary simplification of the registry, some data were not recorded, namely data concerning right ventricular function and details concerning treatment.

We decided to follow the Aronson classification of PH because of specificity of patients qualified to HTx [5]. It is a group of patients in whom PCWP is high, and consequently TPG is relatively low; moreover, TPG has no influence on patient survival irrespective of the analysed group.

Finally, the groups of patients with no PH, passive PH, or reactive PH were relatively small and the follow-up was short, not including the patient’s survival after HTx. Thus the data concerning factors influencing survival and prognosis should be interpreted with caution.

Pulmonary hypertension is the result of longstanding left ventricular HF. Our results indicate that reactive PH is common in ambulatory patients with advanced HF listed for elective HTx. Reactive PH has no further influence on prognosis at this stage of disease, despite the fact that patients with reactive PH had the worst pulmonary haemodynamic scores.