Cardiac complications in children with Kawasaki disease in our own experience

The disease has an acute, self-limiting nature but its consequences may be long-term. The main presenting symptom is prolonged fever.

The diagnostic criteria according to the American Heart Association (AHA) include fever lasting at least 5 days and accompanied by 4 out of the following 5 findings:

The disease has 3 phases. The acute phase usually lasts 7–14 days and includes the pyretic period. This is followed by the subacute phase, lasting from resolution of symptoms until resolution of other clinical manifestations, usually for about 2 weeks. It is characterised by a typically elevated platelet count, palm and sole desquamation, and arthralgia. The third phase is the recovery phase, lasting until complete normalisation of inflammatory responses and the platelet count, which usually occurs at about 8 weeks after the symptom onset [12].

The aim of the study was to evaluate the rate and evolution of coronary artery aneurysms as a complication of Kawasaki disease in hospitalised children.

We retrospectively analysed the medical records of patients hospitalised with Kawasaki disease in the Specialist Mother and Child Healthcare Facility in Poznan in 2008–2014. The diagnosis was based on the AHA criteria [8]. On admission, laboratory tests including complete blood count, C-reactive protein, potassium, sodium, and transaminase levels, urinalysis, and abdominal ultrasound were performed in all children. Blood and urine cultures were also performed. A suspicion of Kawasaki disease was raised after other causes of fever were excluded and no response to antibiotic therapy was seen. In the initial disease phase, children underwent cardiology consultation that included electrocardiogram (ECG) and echocardiography. Details of the diagnostic and therapeutic approach are shown in Table 1. Following the diagnosis, all children received immunoglobulins (2 g/kg body weight) and aspirin in a dose depending on the disease phase. Two children who were transferred from other centres following resolution of fever did not receive immunoglobulins.

Table 1. Diagnostic and therapeutic approach to patients with Kawasaki disease in the Specialist Mother and Child Healthcare Facility, Poznan, Poland

Lumen diameter of the coronary arteries and their branches was measured, the presence of aneurysms was evaluated, and the Z-score was calculated for each coronary artery.

Due to a retrospective nature of this analysis, an approval by the bioethics committee was not required.

No seasonal variation of disease incidence was noted. The mean duration of fever was 9.26 days (range 5–28 days). The rates of specific symptoms are shown in Table 2.

Table 2. Rates of specific symptoms and signs in children hospitalised due to Kawasaki disease

Among the diagnostic symptoms, the most common ones were oral mucosal changes (seen in all patients) followed by polymorphic rash (in 93.33% of patients), while extremity changes were the least common (in 66.67% of patients).

X-ray findings of pneumonia were found in 8 (27%) patients. In 1 child, Kawasaki disease developed 2 days after adenotomy.

Abnormal ECG was found in 9 (30%) patients, most commonly repolarisation abnormalities (in 6 [20%] patients) such as flat or negative T waves or ST segment elevation in the precordial leads. 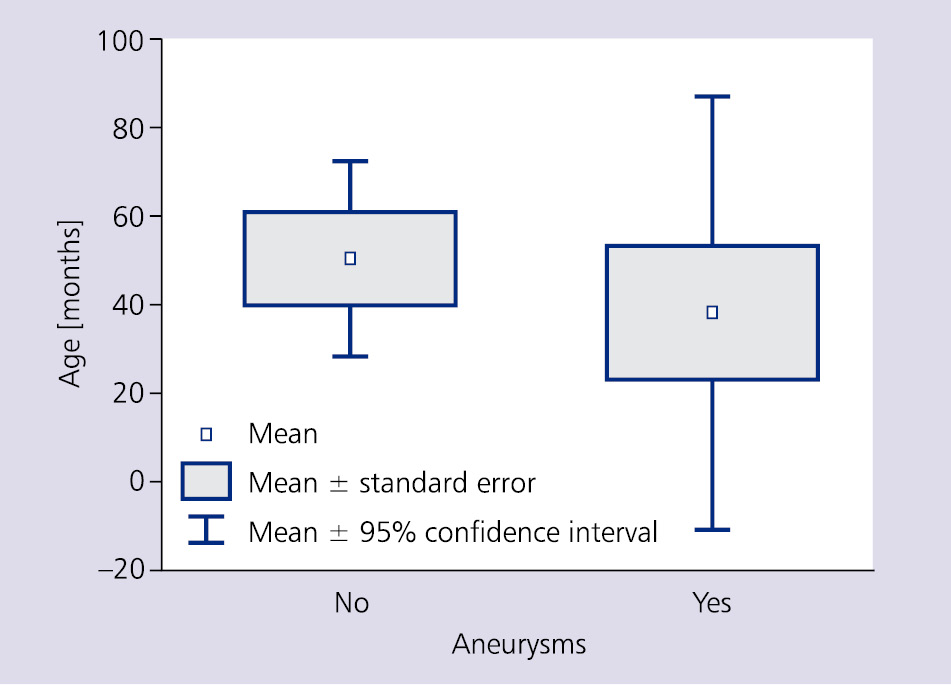 Figure 1. Comparison of patient age distribution between children with and without aneurysms

Table 4. Timing of immunoglobulin u administration in patients with and without aneurysms

Among the analysed children, coronary artery aneurysms were identified in the acute phase of the disease in 2 patients.

One of these patients was a 13-month-old girl with 2 and 3 mm aneurysms within the left coronary artery identified by echocardiography performed at 8 days. When indexed for body weight of the patient, these values corresponded to 2 and 3 standard deviations (SD) above the mean expected vessel diameter. The child received immunoglobulins twice due to recurrent fever associated with a repeated increase in CRP level and anaemia requiring transfusion of packed red blood cells. Coronary artery aneurysms persisted in a follow-up echocardiography 12 months later.

In another patient, a 67-month-old boy, echocardio­graphy at 7 days of fever showed a 3.5 mm aneurysm within the right coronary artery, corresponding to 3 SD above the mean vessel diameter indexed for body area (0.73 m2). The treatment was initiated at 8 days of fever. Coronary artery changes persisted in follow-up echocardiography at 1 and 6 months but resolved at 12 months.

The most severe complications developed in a child in whom the diagnosis was most delayed. Before admission to our unit, a 10-month-old boy was hospitalised twice in a community hospital where pneumonia was diagnosed and parenteral antibiotic therapy was initiated but fever did not resolve. Immunoglobulins were administered at 26 days after the symptom onset. Echocardiography performed at 4 weeks showed 3 aneurysms that persisted over 5 years of follow-up, with the vessel diameter in the affected segments corresponding to more than 3 SD above the reference vessel size.

In another boy (patient No. 4, Table 3), a 5 mm fusiform aneurysm (> 3 SD) was diagnosed 3 months after the disease onset, and the lesion persisted in follow-up echocardiographic examinations. This patients also received immunoglobulins twice and was treated with systemic glucocorticosteroids due to recurrent fever. Levels of acute phase proteins were elevated (CRP 155 mg/L, procalcitonin 24 ng/mL). Platelet count was initially low, followed by thrombocytosis in the second week. Follow-up evaluation at 12 months showed left ventricular hypertrophy and hypertension.

Myocardial and coronary artery involvement is the main reason for mortality in Kawasaki disease [14]. During the acute phase, as many as 50% of patients develop myocarditis manifesting with tachycardia, arrhythmia, conduction disturbances, and pericarditis but the most severe complication is coronary vasculitis leading to coronary artery wall damage [8, 10, 14]. Transient coronary artery dilatation is seen in nearly half of patients, and occurrence of such lesions increases the risk of thromboembolic complications [14–17].

Our analysis showed that cardiac complications are a significant problem in these patients. Transient abnormalities were identified by echocardiography in 60% of patients. A high proportion of cardiac complications in our study population compared to Japanese data may be explained by a small patient sample [17, 18]. As Kawasaki disease is common in the Japanese population, physicians are very experienced in diagnosing this disease. In Poland, due to a self-limiting nature of the disease, some less affected patients may not be diagnosed properly. On the other hand, the presence of coronary artery lesions strongly suggests Kawasaki disease. Thus, the diagnosis is easier in patients with a complicated course. To date, only few studies were published on Kawasaki disease in the Polish population [5–7]. In the 2013 study by Berdej-Szczot et al. [6], coronary artery involvement was identified in 10 (26%) of 38 patients but treatment was initiated beyond 10 days in most patients [6]. In our study group, we noted non-coronary changes such as mitral or aortic regurgitation already in the acute disease phase. However, we were not able to ascertain whether these changes developed during Kawasaki disease or were present earlier as none of these children received previous cardiac care. In a multicentre study of 199 children with Kawasaki disease, Printz et al. [19] noted mitral regurgitation at the time of the diagnosis in 27% of patients. They also showed that these lesions were associated with the occurrence of coronary artery aneurysms and suggested a common inflammatory underlying mechanism.

Established adverse prognostic factors include age below 12 months or above 9 years, erythrocyte sedimentation rate (ESR) > 40 mm/h, male gender, and low platelet count at the time of the diagnosis [10, 21]. Due to a small study sample, we were unable to evaluate the prognostic value of specific parameters. Male gender was an adverse prognostic factor in the analysed group of patients with aneurysms. In the patient who was febrile for the longest duration of time, the diagnosis of pneumonia and outpatient treatment followed by admission to a community hospital might have contributed to a delayed diagnosis and treatment initiation only at 26 days after the symptom onset. Attributing fever to pulmonary changes may significantly delay the diagnosis

The mean age in our study group was slightly higher compared to other reports [4]. However, the proportion of children < 5 years of age was similar to reported in other studies [5, 6]. According to the literature data, as many as 73% of Kawasaki disease cases are diagnosed in children < 5 years of age, most commonly in those aged 6–24 months [6, 8]. The disease is significantly more common in boys and a marked male preponderance was also seen in our study group. Similarly to the study by Berdej-Szczot et al. [6], we found no seasonal variation of the disease incidence. Clearly, further multicentre analyses are required to explain this phenomenon, which is quite uncommon for Kawasaki disease [9, 18].

Outpatient oral antibiotic therapy was administered before admission in 26 (96%) children which made microbiological testing significantly more difficult. Associated leukocyturia may suggest a urinary tract infection, and a negative culture result during antibiotic therapy is difficult to interpret.

Parenteral antibiotic therapy was administered in all children in our study group. Kawasaki disease should be included in the differential diagnosis if fever does not resolve despite antibiotic therapy. While typical streptococcal angina is characterised by a significant clinical improvement following initiation of antibiotic therapy, fever may persist despite treatment in infectious mononucleosis. In such cases, investigations should include serological testing.

A limitation of our study was a low number of patients with aneurysms.