In clinical practice, some patients with LBBB have no demonstrable cardiac disease with clinical investigation and echocardiographic evaluation. Although some electrocardio­graphy (ECG) findings of LBBB are known to be associated with heart failure and adverse prognosis, no ECG criteria of LBBB have been systematically defined to differentiate patients with structural heart disease from those with “normal hearts”. The main purpose of this study was to define markers of systolic dysfunction in patients with LBBB.

The study was approved by the Local Ethics Committee (2013-26/7). Subjects admitted to our hospital with LBBB in their ECG were included in the study. Detailed medical history was taken from each subject. Physical examination, chest X-ray, laboratory investigations including complete blood count, blood biochemistry and thyroid function tests were routinely performed for each patient. The patients were categorised according to their LV systolic function as group 1 (left ventricular ejection fraction [LVEF] ≥ 50%) and group 2 (LVEF < 50%). Patients who are free of any cardiac diseases other than LBBB were categorised as the control group.

All ECGs were evaluated by two other cardiologists who were blind to the medical history and echocardiographic findings of the patients. LBBB was defined by the presence of QRS complex duration of ≥ 120 ms, presence of a QS or rS in V1, and broad, notched, or slurred R waves in leads D1, aVL, V5, and V6. Absence of q waves in leads D1, aVL, V5, and V6 was not strictly looked for in the diagnosis of LBBB because pathological q waves due to extensive anterior myocardial infarction are known to be associated with LBBB in these leads, and also q wave in aVL is allowable in current guidelines in defining LBBB [3]. LBBB was further categorised as either concordant or discordant according to positive or negative T waves, respectively, in leads V5, V6, or D1, respectively. Furthermore, LBBB was subdivided into LBBB with residual conduction of left bundle branch (those with an r wave in V1 ≥ 1 mm and/or a q wave in aVL ≥ 1 mm) and complete LBBB (those without either of these findings). Electrocardiographic recordings were examined independently by two cardiologists for the diagnosis and characterisation of LBBB as either “concordant” or “discordant”, and either “residual left bundle branch conduction” or “complete LBBB” without interobserver variability (Figs. 1, 2). 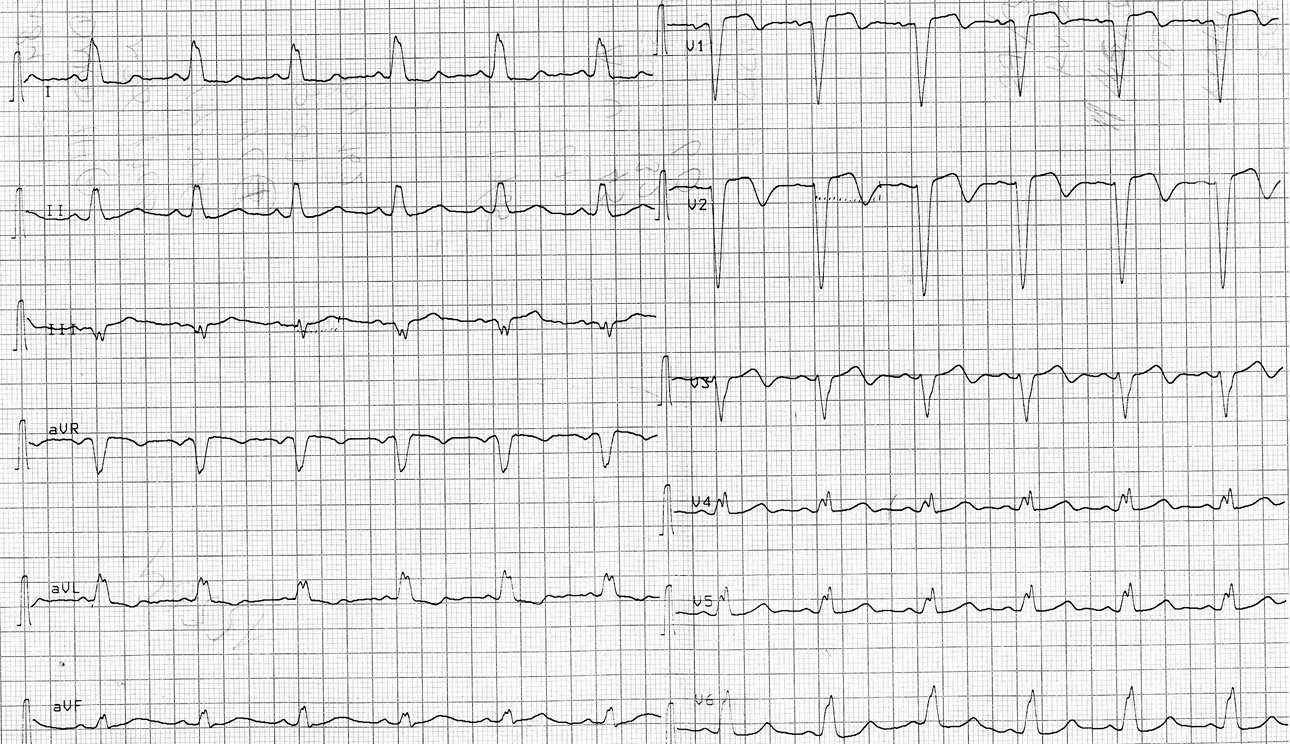 Figure 1. An example of an electrocardiogram (precordial leads) from a patient without any structural heart disease and with left bundle branch block. T waves are concordant with QRS complex in lead V6, and there is no sign of residual conduction of the left bundle branch

Figure 2. An example of an electrocardiogram (precordial leads) from a patient with non-ischaemic dilated cardiomyopathy. T waves are discordant with QRS complex in lead V6, and the amplitude of the wave in lead V1 is greater than 1 mm, demonstrating residual conduction in left bundle branch (distal left bundle branch disease)

Echocardiographic evaluation was made by recording a one-lead ECG continuously. Left ventricular end-diastolic and end-systolic diameters, ejection fraction (EF), interventricular septal and posterior wall thicknesses, and left atrial end-systolic diameters were measured from M-mode in the parasternal long axis views according to the standards of the American Society of Echocardiography. Left ventricular mass (LVM) was determined by Teichholz formula in each subject, and mass index was calculated by dividing LVM by body surface area. Left ventricular diastolic function was evaluated by mitral inflow velocities, namely E peak and A peak, and E/A ratio and also by deceleration time of the E wave and isovolumic relaxation time. Diastolic function was classified as normal, impaired relaxation (grade 1), pseudonormalisation (grade 2), and restrictive pattern (grade 3).

Table 1. The clinical and echocardiographic characteristics of the patients 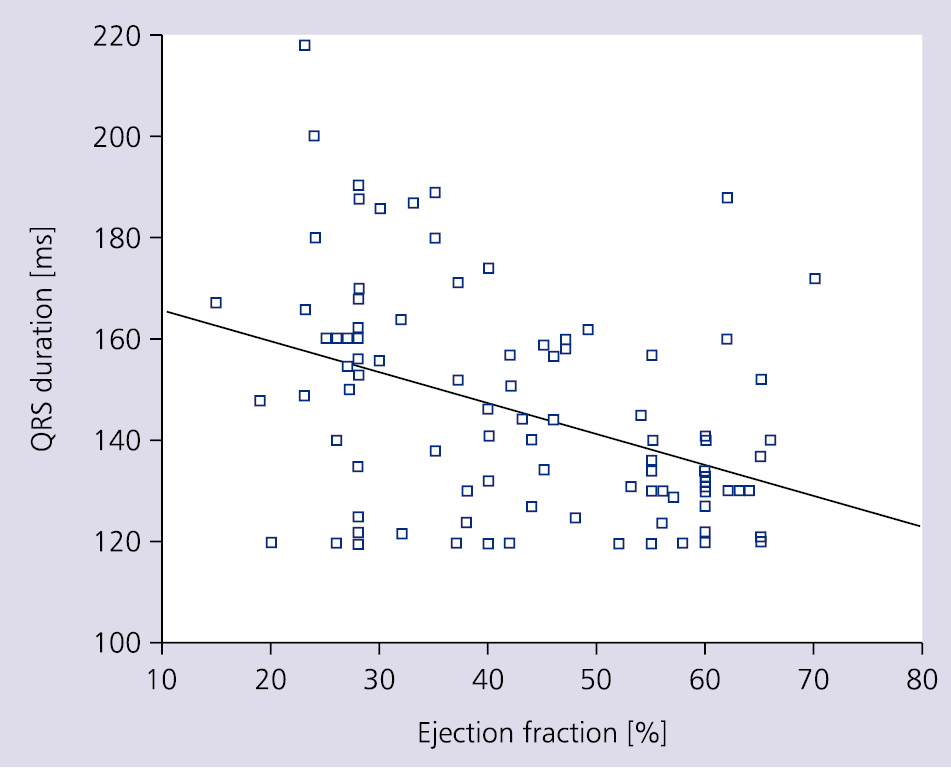 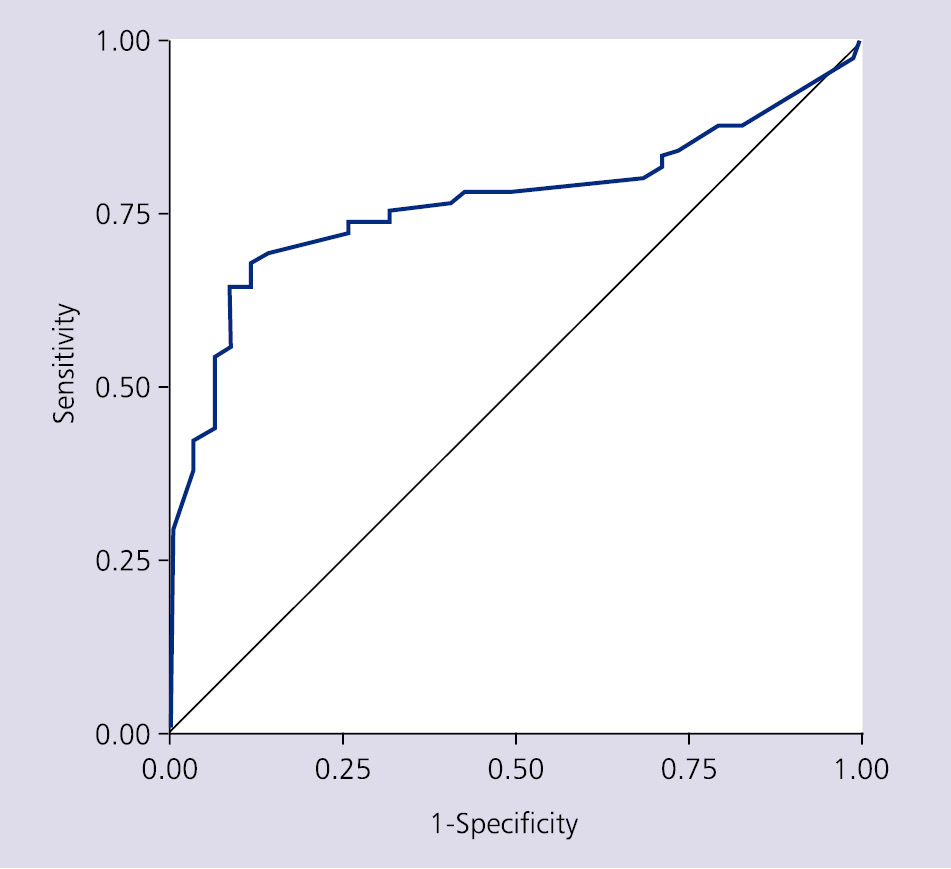 Approximately one-third of patients with chronic heart failure have LBBB [1]. LBBB is known to be an adverse prognostic sign irrespective of LV systolic function, and it has been shown to be an independent risk factor for cardiovascular death in the general population [6]. It is also a risk factor of cardiovascular morbidity and mortality for patients with arterial hypertension and ischaemic heart disease [7]. LBBB is a strong adverse prognostic sign associated with total and sudden mortality in patients with heart failure [8]. LBBB alters the pattern of electrical activation of the LV. LBBB-induced electrical and mechanical dyssynchrony enhances LV dysfunction and remodelling. LBBB has been shown to reflect underlying myocardial structural disease [9]. It also contributes to functional impairment of myocardium and negatively affects perfusion, haemodynamics, systolic, and diastolic functions [10]. LBBB is usually accompanied by LV dilatation and reduced EF [11–13]. The perfusion of the septum is impaired in patients with LBBB even in the absence of coronary artery disease [14, 15]. The relation of causality between LBBB and heart failure is not completely known, and “the chicken and the egg” paradox is valid for this situation. Most probably, both situations give rise to each other.

The width of the QRS complex has been demonstrated to increase as the severity of LV systolic function advances, and baseline LBBB has been found to be associated with worse LV function and older age [16]. In the presence of LBBB, the QRS duration has been shown to have a significant inverse relationship with EF, and QRS duration greater than 170 ms is said to be a marker of significant LV systolic dysfunction [17]. The diagnostic evaluation of patients with isolated LBBB is challenging. In a recent study, 31% of patients with isolated LBBB and normal echocardiographic results have been found to have some pathological findings in cardiac magnetic resonance imaging [18]. In our study we found that patients with QRS duration of 140 ms or greater have EF less than 50% with sensitivity and specificity of 72% and 75%, respectively. Padanilam et al. [19] reported r wave ≥ 1 mm in V1 and/or q wave ≥ 1 mm in aVL as predictors of residual conduction in the left bundle branch. This ECG finding represents left-to-right activation of the interventricular septum. Residual conduction of the left bundle branch was found to be higher in group 2, which could be explained by distal and widespread involvement of the left bundle branch due to more marked intramyocardial disease [20]. LBBB may be caused by disease of the conduction system and/or myocardium. Normally, interventricular septum is depolarised from left to right resulting in septal q waves in lateral leads. If impulse conduction is blocked in the left bundle branch, the septal q wave disappears. Intraventricular conduction abnormalities associated with prior infarction, hypertrophy, or cardiomyopathy may result in QRS widening and atypical forms of LBBB [21].

Left bundle branch block has been defined as concordant when T waves are positive, and discordant when T waves are negative in leads V5, V6, or D1 [22]. In systolic heart failure, discordant LBBB was found to be associated with worse clinical, neurohormonal, and prognostic profile [22]. The specific repolarisation pattern of discordant LBBB may be a sign of increased heterogeneity of the repolarisation process. A planar QRS-T angle > 90° has been shown to be a significant predictor of a composite end point of death, appropriate implantable cardioverter-defibrillator shock, or resuscitated cardiac arrest in non-paced, mild to moderately symptomatic patients with non-ischaemic cardiomyopathy. A widening QRS-T angle has been proposed to represent a continuum of worsening underlying pathology and outcome [23]. Discordant LBBB was more frequent in patients with EF < 50% in our study. Therefore, we think that in the case of the presence of discordant LBBB, the probability of having systolic dysfunction is higher compared to concordant LBBB.

This is a cross sectional study including patients with LBBB. Therefore, some patients with LBBB and normal EF may progress to overt heart disease and systolic dysfunction in the follow-up, which could not be diagnosed by echocardiography during inclusion. Echocardiography may not be a highly sensitive method of investigation to expose early-stage cardiac diseases. Magnetic resonance imaging may be more useful for this purpose, but its expense should be kept in mind.

In conclusion, LBBB could be an ECG finding of structurally normal hearts or demonstrable heart diseases. Since ECG is a simple and widely available diagnostic tool, defining some ECG criteria to differentiate patients with systolic dysfunction is of importance for cardiologists, internists, and general practitioners. Although male gender, QRS duration greater than 140 ms, discordant T wave-LBBB, and residual conduction in the left bundle branch were found to be markers of reduced EF in univariate analysis, only male gender and discordant T wave-LBBB were shown to be independent markers of reduced EF.