Primary percutaneous coronary intervention (PCI) is currently the most effective reperfusion strategy in ST-elevation acute myocardial infarction (STEMI). STEMI represents a major medical and socioeconomic problem, and our country has a unique system of care for STEMI patients. 92% of all hospitalised STEMI patients are treated by primary PCI due to a network of cathlabs and emergency medical services [1]. However, data regarding renal complications of primary PCI are lacking.

Acute renal function impairment associated with radiologic procedures, known as contrast-induced acute kidney injury (CI-AKI), is strongly associated with a higher rate of morbidity and in-hospital mortality, and diminished long-term survival [2]. Patients with acute myocardial infarction undergoing primary PCI are at increased risk of acute kidney injury (AKI) [3, 4]. This fact suggests that mechanisms other than direct contrast nephrotoxicity are involved in AKI in this clinical setting.

This report describes the incidence, risk factors, and consequences of AKI in patients undergoing primary PCI for STEMI in current daily practice.

We performed a retrospective analysis of all consecutive patients who underwent primary PCI for STEMI at our institution from 1.01.2010 to 31.12.2010. Patients on long-term renal replacement therapy were excluded.

Hospitalisation mortality data was gathered from the National Registry of Cardiovascular Interventions (NRKI). NRKI data is matched with the national death registry periodically.

A total of 202 consecutive patients who underwent primary PCI for STEMI were included in our analysis. Regarding nephroprotective measures, apart from the oral fluid intake, all patients received normal saline infusion during primary PCI, and the infusion rate was adjusted or infusion was stopped according to the clinical status of the patients. One hundred (49.5%) patients received continuous normal saline infusion during coronary care unit hospitalisation. All patients were administered low-osmolar non-ionic contrast medium iomeprol 300. Demographic and baseline characteristics of the patients are summarised in Table 1.

Table 2 shows clinical, procedural characteristics and in-hospital complications of the study patients who developed AKI and those who did not.

Table 2. Baseline clinical, procedural characteristics and in-hospital complications of the study patients who developed acute kidney injury (AKI) and those who did not

In multivariate analysis, the only variable that remained an independent correlate of AKI was HF (Killip class II, III or IV) (Table 3).

Figure 1 shows principal components analysis and factor analysis applied to a set of the most important variables related to AKI. Killip class and CIN risk score co-vary strongly with AKI in a positive sense. Male gender, LVEF, and blood pressure co-vary with AKI in a negative sense. Figure 2 shows that AKI occurrence increases in every consecutive Killip class category. 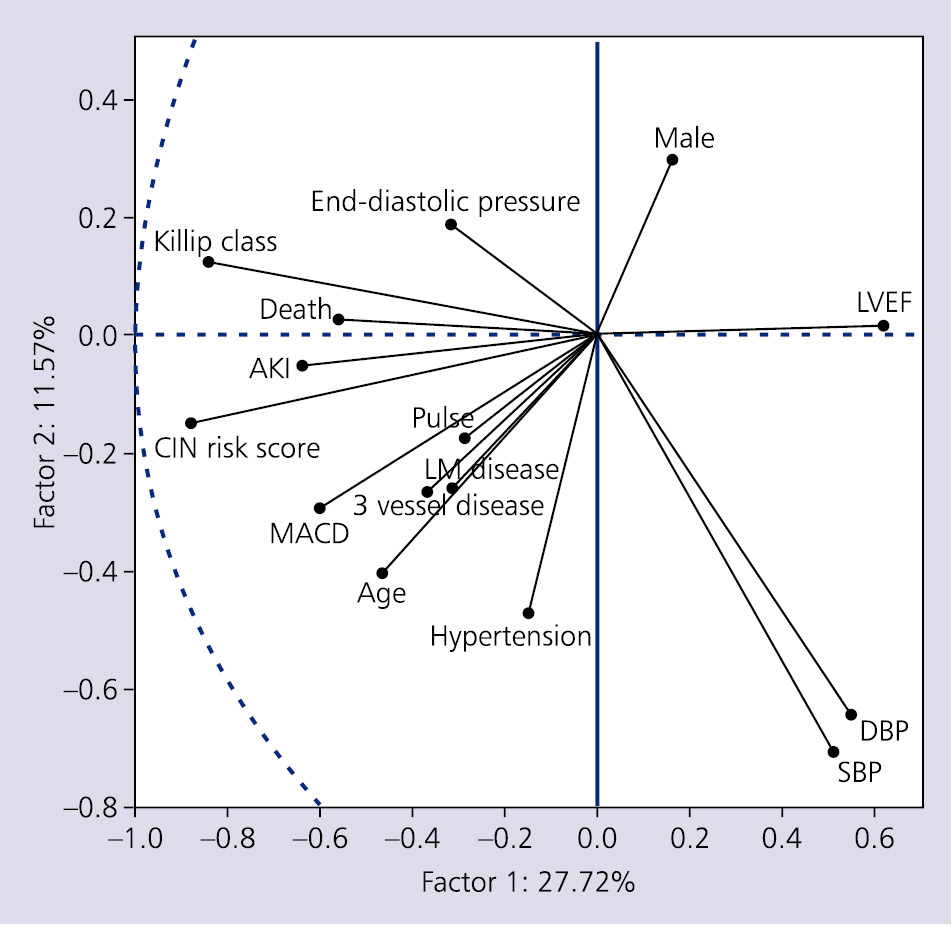 Figure 1. Principal components analysis and factor analysis. Variables with a high degree of systemic variation lie far away from the origin. Variables of little importance lie near the origin. It is mandatory to consider proportions of the variance along each component, Factor 1 is nearly three times as important as Factor 2. Variables close to each other co-vary strongly, proportionally to the degree of distance from the origin. If the variables lie on the same side of the origin, they co-vary in a positive sense; if they lie on the opposite side of the origin along a straight line, they are negatively correlated. Variables which are at 90 degrees to each other through the origin are independent; AKI — acute kidney injury; CIN — contrast induced nephropathy; LM disease — left main coronary artery stenosis ≥ 50%; MACD — maximum allowable contrast dose ratio; LVEF — left ventricular ejection fraction; SBP — systolic blood pressure; DBP — diastolic blood pressure

The results of our study suggest that AKI in STEMI patients treated with primary PCI represents a relatively frequent adverse event and affects approximately 12% of patients. AKI occurrence was associated with increased in-hospital mortality (24% vs. 3.4%; p = 0.001) and morbidity.

The major finding of this study is that the only independent predictor of AKI in the setting of STEMI treated by primary PCI was HF.

Heart failure patients were at four times higher risk of AKI than those without HF. Although the PPV of HF for AKI development was low (36%), the NPV of 97% could bring us valuable and fast clinical information. In the absence of rales, third heart sound, pulmonary oedema, or shock the risk of AKI in STEMI patients does not exceed 3%, and therefore particular nephroprotective measures are probably not needed. Cardiogenic shock occurs in approximately 7–10% of all STEMI patients. Shock patients represented 9.9% of our sample. Cardiogenic shock predicted AKI with 56% PPV. The fact that more than half of cardiogenic shock patients developed AKI was conformant with previously published data [9].

STEMI patients treated by primary PCI represent a population at higher risk for AKI than those undergoing elective coronary angiography and/or PCI. Renal hypoperfusion caused by HF or prolonged hypotension, larger volume of contrast media, bleeding, and atheroembolic events during catheterisation are the most cited conditions that contribute to renal injury [3, 9, 10].

Our data suggest that HF is the predominant contributor to AKI in this clinical setting. AKI co-varied strongly with HF (Fig. 1). Contrast media consumption was relatively low. Transradial approach in one half of the patients led to a low incidence of bleeding and possible lower risk of atheroembolic events. However, a direct causal link between AKI and its particular risk factors cannot be confirmed by our data.

Acute myocardial infarction itself leads to kidney injury even when no contrast media is administered. Koreny et al. [11] analysed all consecutive patients admitted for acute myocardial infarction with cardiogenic shock in a single centre from 1993 to 2000. AKI developed in 33% of patients within 24 h. Coronary angiography was performed only in 34% patients and had no effect on kidney injury incidence [11]. In the SHOCK trial, AKI was even more frequent in patients treated with initial medical therapy (with no contrast administration) than in those treated with early revascularisation (24% vs. 13%) [12].

AKI in acute STEMI is considered to be one of the subtypes of type 1 cardiorenal syndrome (acute cardiorenal syndrome) and represents a powerful and independent predictor of in-hospital and one-year mortality [13]. As yet we cannot differentiate the effect of contrast media administration from different mechanisms involved in AKI development in STEMI patients with HF including haemodynamic abnormalities (hypoperfusion with decreased renal preload, increased central venous pressure with increased renal afterload), sympathetic hyperactivity, renin–angiotensin–aldosterone system activation, adenosine release, and oxidative stress [14]. The universal term AKI may be more appropriate than CI-AKI in this clinical setting. Novel markers of renal dysfunction might bring additional information about the mechanisms and prognosis of kidney injury and provide its earlier detection [15–17].

In accordance with the findings of Wi et al. [18], Mehran CIN risk score correlated strongly with AKI in our analysis (Fig. 1). Of the eight CIN risk score variables, the three strongest ones are related to HF (hypotension, intra-aortic balloon counterpulsation, NYHA class III and IV, or pulmonary oedema).

Nevertheless, the Killip classification remains a very simple and useful tool for physicians. It can bring us valuable information regarding AKI risk (Fig. 2).

Four potential preventive strategies against AKI have been evaluated in STEMI patients undergoing primary PCI; however, the data are too sparse to make a clinical recommendation [4, 19]. This paper reflects our daily practice. We focused on adequate hydration and use of low volume of contrast. Fluid balance within 6 h after primary PCI did not differ between both of the above-mentioned groups. Fluid intake within 6 h post PCI exceeded 960 mL, the threshold for high risk of AKI according to Maioli et al. [19].

The volume of low-osmolar contrast agent administered (173 ± 42 mL) was lower than in older relevant trials or similar to recent trials [3, 9, 10]. MACD was exceeded in 3% of patients only. This fact suggests that the technique of primary PCI has evolved and experienced operators are more capable of achieving successful procedure results with a lower amount of contrast agent. Patients who developed AKI were not administered significantly higher doses of contrast media than patients without AKI.

According to the findings of our analysis, we should target the predominant risk factor, HF. In other words, we should use all necessary measures to assure the optimal haemodynamic status of our STEMI patient. Paradoxically, early revascularisation with contrast media administration is one of those measures.

The results of this paper should be regarded within the setting of certain limitations. Our analysis reflects a single-centre experience, and the population studied is relatively small. Follow-up was limited to in-hospital morbidity and mortality. However, mortality data was cross-checked with the national death registry. Conclusions should be drawn carefully. A larger sample size could increase the power of statistical analysis and allow the discrimination of other independent predictors of AKI.

AKI was found to be a frequent complication of STEMI in patients treated by primary PCI and was associated with increased in-hospital morbidity and mortality. Our data suggests that HF is the strongest predictor of AKI in this clinical setting. Other risks factors used commonly in patients undergoing elective coronary angiography and/or PCI, including contrast medium volume, baseline renal function, diabetes, and age, failed to predict AKI.