A 24-year-old woman without previous medical history was admitted to hospital in third hour of acute chest pain. ST-segment elevation in inferior leads was found in the electrocardiogram examination (Fig. 1). Acute myocardial infarction was diagnosed, and the patient underwent immediate coronary angiography, which revealed normal left coronary artery (LCA) (Fig. 2) and thrombotic occlusion in the mid segment of the right coronary artery (RCA) (Fig. 3A). Moreover, an additional thrombosed vessel originating from the proximal segment of the RCA was identified (Fig. 3A). Aspiration thrombectomy was performed and TIMI 3 flow was restored in the RCA (Fig. 3B, C), with full relief of symptoms. No atherosclerotic lesion was identified at the occlusion site (Fig. 3C). The operator attempted opening the vessel originating from the proximal RCA, but the guidewire could not cross it (Fig. 3D). The procedure was stopped and after three days the patient was discharged on dual antiplatelet therapy. Within three weeks the patient was again urgently hospitalised for the same symptoms. Immediately before the angiography the chest pain relieved and angiographic examination showed normal LCA and good result of the previous intervention in the RCA. The morphology of the additional thrombosed vessel originating from the RCA also remained unchanged. Coronary computed tomography angiography (CTA) was scheduled in the tertiary hospital (Fig. 4A–D) showing thrombosed coronary fistula (blue arrow) between the RCA and the left atrium. A portion of the thrombus was protruding to the left atrium (Fig. 4, black arrow). After a Heart Team discussion, the risk of surgical or percutaneous closure of the fistula was assessed as very high, due to the possibility of systemic embolisation. Finally, the decision was made to treat the patient medically with oral anticoagulation. So far, after five years of follow-up, the patient remains asymptomatic. Coronary artery fistulae are rare congenital anomalies found in coronary artery imaging, with an incidence of around 0.1–0.2%. Myocardial infarction caused by embolisation from a thrombus formed inside a fistula is an extremely rare event. In the presented case the operator wrongly assumed that the thrombosed vessel was an anomalous circumflex artery originating from the RCA and attempted (fortunately unsuccessfully) crossing of the vessel with the angioplasty guidewire. The manipulation within the thrombosed fistula may have caused the risk of systemic embolisation because the thrombus was already protruding into the left atrium. This case also shows the value of CTA examination, which led to the final diagnosis of the fistula and the treatment decision. Visualisation of a thrombus protruding into the left atrium discouraged any interventional treatment and indicated the need for anticoagulation. 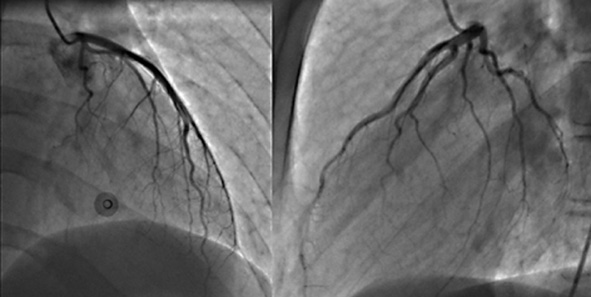 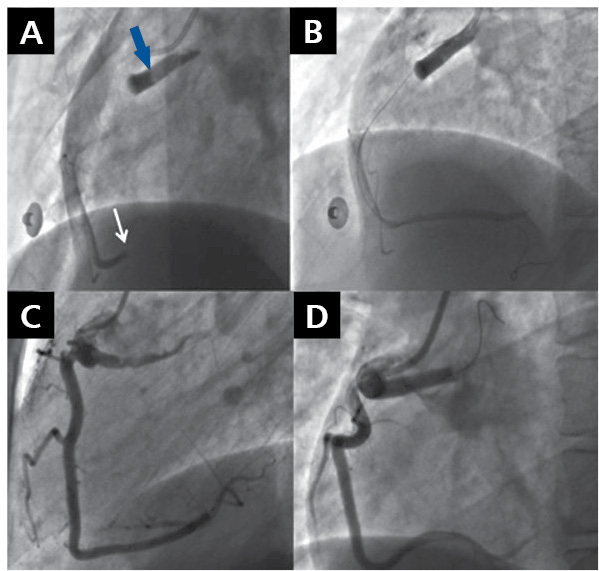 Figure 3. Angiography of the right coronary artery (RCA); A. First injection showing occluded RCA (white arrow) and thrombosed coronary fistula originating from the proximal part of the RCA (blue arrow); B. RCA with the guidewire inserted; C. RCA with TIMI 3 flow without any sign of atherosclerosis after aspiration thrombectomy; D. An attempt to open the thrombosed vessel, wrongly judged to be an anomalous left circumflex artery 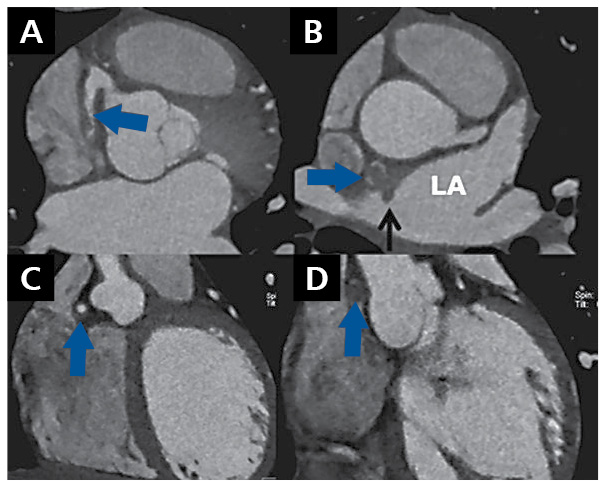