Intrahepatic cholestasis of pregnancy (ICP) is the most common pregnancy specific liver disease and presents mainly in the third trimester with pruritis, elevated total serum bile acids and raised liver enzymes [1]. The incidence of the disease is reported between 0.2% and 2% depending on geographical location and ethnicity [2, 3]. ICP has been associated with serious and adverse pregnancy outcome such as preterm birth, nonreassuring fetal heart tracing, meconium staining of the amniotic fluid, and stillbirth [4].

The etiology of the ICP is complex and has not yet been understood. Multiple factors such as cholestatic effect of reproductive hormones in genetically susceptible pregnants, dietary and environmental factors play role in the pathogenesis of the disease [5, 6]. The association between inflammatory processes and cholestatic liver disease has been reported in previous studies [5, 7]. Elevated concentrations of bile acids (BA) may lead to inflammatory response characterized by infiltration of inflammatory cells in hepatocytes and cause hepatocellular injury [5].

Red cell distribution width (RDW) is evaluated automatically during complete blood count (CBC) and shows variation of red blood cell volume. It is an anisocytosis marker and used especially for differential diagnosis of anemia [8]. However recent studies reported that systemic inflammation may lead to increase in RDW levels and it can be used as an inflammation marker in various diseases such as cardiovascular diseases (CVD), hypertension (HT), and thrombotic disorders [9]. Furthermore RDW is reported to be an independent risk factor for death in general population [10].

This prospective case-control study was conducted at the Zekai Tahir Burak Women’s Health Education and Research Hospital, a tertiary center in Ankara, Turkey. The Institutional Review Board of the hospital approved the study, and the universal principles of the Helsinki Declaration were applied. Informed consent was obtained from all participants.

Ninety pregnant women with diagnosis of ICP, 53 with mild disease and 27 with severe disease, during the period of January 2014 and January 2016 were included to the study. Ninety healthy pregnant women matched for maternal age in the third trimester within the same time were recruited as the control group. Pregnant with active infection, with chronic systemic disease (endocrinological, urogenital, cardiovascular, gastrointestinal, immunological, or oncological) and with multiple gestation were excluded from study. ICP was defined when the pregnant had unexplained pruritis without rashes in different parts of body with elevated serum TBA (≥ 10 mmol/L) and/or raised liver enzymes. Pregnant women with ICP were divided into mild and severe group based on serum TBA levels of 10–40 and ≥ 40 mmol/L, respectively [1]. All the pregnant women with ICP were hospitalized and tested for CBC, liver function tests, hepatitis A, B and C virus for initial evaluation. All CBC and the other blood analyses were conducted within two hours of blood sampling in the central laboratory of the hospital.

Demographic data, including maternal age, parity, gestational week, BMI, and the laboratory data of the routine CBC parameters in the first evaluation of the patient were recorded. Gestational age was determined based on the first day of the last menstrual period (LMP) and first trimester ultrasonographic measurement of the crown–rump length (CRL). If ultrasound dating differed from LMP dating by more than seven days, the estimated date was changed to ultrasound dating [11]. Gestational age at delivery, birth weight (BW), Neonatal Intensive Care Unit (NICU) admission, meconium staining of amniotic fluid and APGAR score at 5 minutes were recorded for assessment of perinatal outcome.

The data were analyzed using the Statistical Package for Social Sciences, Windows version 15.0 (SPSS, Chicago, IL, USA). Descriptive statistics were expressed as mean ± standard deviation and median (minimum-maximum) for numerical variables. Normality of the data distribution was assessed with the Kolmogorov-Smirnov test. Statistical significant differences between the groups were determined by Mann-Whitney U test with Bonferroni correction. Categorical variables were expressed as number (percentage). Proportions were compared with Fisher’s exact test or the chi-square test where appropriate. Associations between the variables were explored using the Pearson’s correlation analyses. Logistic regression analyses were performed to calculate odds ratios (OR) with 95% confidence intervals. A p value < 0.05 for were considered as statistically significant.

A total of 180 pregnant (90 with ICP and 90 without disease) were included to the study. There were no statistically significant differences between groups according to age, parity, body mass index (BMI) and gestational week. Mean hemoglobin and hematocrit concentration, white blood cell count (WBC) and platelet count were also similar between groups. Mean Alanine Aminotransferase (ALT) and Aspartate Aminotransferase (AST) levels were significantly higher in ICP group. Demographic data and laboratory parameters of ICP and control group are presented in Table 1.

There were also no significant differences in age, parity and BMI between mild and severe groups. Mean hemoglobin and hematocrit concentration, WBC and platelet count were also similar between mild disease and severe disease. Mean ALT level and mean fasting and postprandial total bile acid concentration (TBA) levels were significantly higher in severe group. Demographic data and laboratory parameters of mild and severe ICP groups are showed in Table 2. 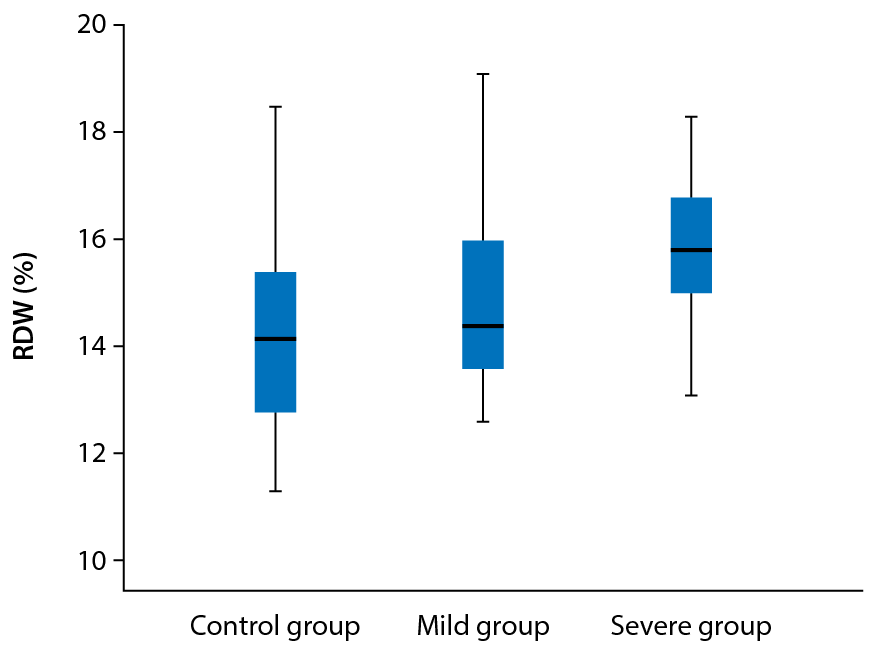 Figure 1. Comparison of RDW levels in the control, mild and severe ICP groups 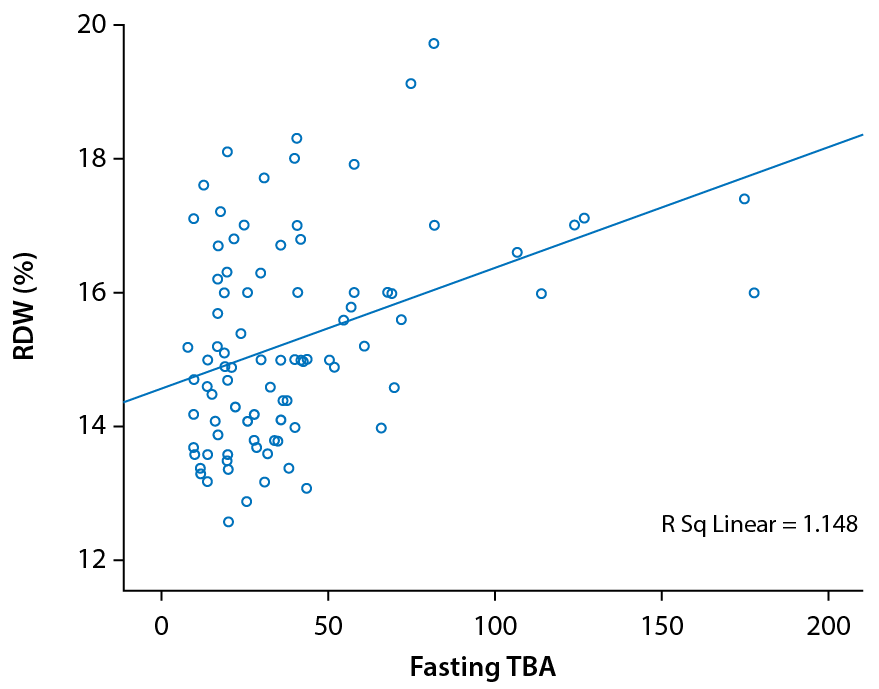 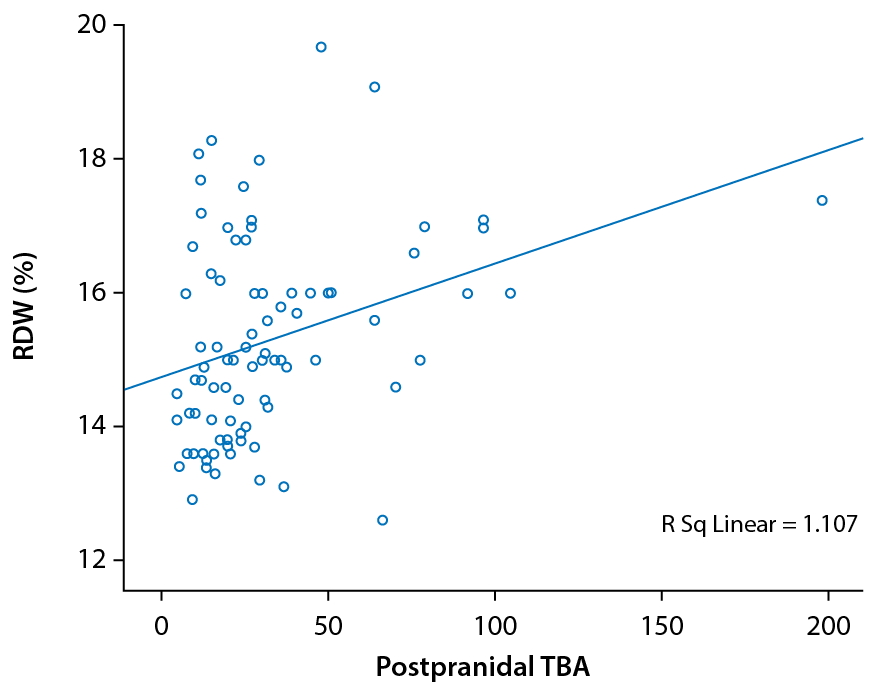 The perinatal outcomes of the pregnants with ICP and controls were presented in the Table 3. There were no cases of intrauterine fetal demise in any of the groups.BW and gestational age at birth were lower in the ICP group than the control group (p = 0.0005 and p = 0.0009, respectively) (Tab. 3). In Pearson correlation analyses in pregnant women with ICP, there were no correlation between RDW and BW and gestational age at birth(r = –0.067, p = 0.53; r = –0.068, p = 0.52; respectively). In subgroup analyses in pregnants with ICP; mean RDW levels were significantly higher in pregnants with meconium staining than without meconium staining (16.5 ± 1.3, 15.08 ± 1.4; p = 0.024 respectively). However there were no differences in RDW values in terms of other perinatal complications in pregnants complicated with ICP (Tab. 4). In logistic regression analyses when considering serum RDW value > 15.7 (%), the risk of meconium staining increased 6.4 fold (95% CI: 1.5–24.1; p = 0.011).

In the present study we showed that RDW was significantly higher in pregnants with ICP than healthy pregnant controls. It was also significantly higher in severe disease than mild disease in subgroup analyses. We have reported positive and significant correlation between serum RDW level and fasting and postprandial total bile acid concentration and liver function tests in ICP patients. To the best of our knowledge this is the first study that evaluated and demonstrated an association between RDW level and ICP.

The exact pathogenesis of ICP is unknown but association between inflammation and disease has been previously reported in literature [7] .Elevated bile acid concentrations may lead to the release of several proinflammatory mediators and trigger inflammatory response in hepatocytes with infiltration of inflammatory cells into the liver [5, 12, 13]. The activated inflammatory cells cause significant liver injury [13] and liver’s local intracellular response to inflammation determines the clinical outcome and prognosis of the disease [7]. However the mechanism how cholestasis stimulates the production of proinflammatory mediators in the liver has not been completely understood yet.

Recent studies demonstrated increased circulating levels of systemic and vascular inflammatory markers in pregnancies with ICP [12, 14, 15]. Systemic inflammation can be measured by a variety of serum markers and it is indicated that hematological indices and ratio of blood cell subtypes in CBC might have been used as an inflammatory marker in many diseases. RDW, a hematological parameter in CBC, shows red blood cell size and it is routinely used for differential diagnosis of anemia [16]. In recent studies, it is reported that systemic inflammation may cause an increase in RDW and it can be used as an alternative diagnostic inflammation and oxidative stress marker in many diseases such as CVD, renal diseases, thrombotic and hypertensive disorders [9, 16] . Furthermore; Hu Z et al. found increased RDW levels and showed RDW as a potential prognostic marker in different types of liver disease such as liver cirrhosis after HBV infection, primary hepatocellular carcinoma, and primary biliary cirrhosis [17].

Inflammation may impair iron metabolism and can cause release of inflammatory cytokines that inhibit red cell maturation and lead to immature erythrocytes to enter circulation. This may explain the association between increased RDW levels and inflammation [18, 19]. Elevated level of RWD has also been found to be associated with poor outcome and independent marker of mortality in these patients [20, 21].

Systemic inflammation has been suggested to play a role in the etiology of certain obstetric complications such as preeclampsia, preterm delivery, and gestational diabetes [22, 23]. Erdoğan et al found no association between RDW levels and gestational diabetes mellitus [24]. Kurt et al. found that RDW was associated with preeclampsia and with severity of the disease [25] .Otherwise Abdullahi et al could not find an association between serum RDW level and the presence of preeclampsia [26]. However, little is known and there is no study about if there is an association between RDW level and ICP. We found increased levels in pregnants complicated with ICP than healthy pregnants in our study.

ICP is associated with increased risk of preterm delivery, meconium passage, intrapartum fetal distress and stillbirth [27, 28]. Due to the high rates of stillbirth and neonatal complications early delivery is recommended for these pregnants [29]. In literature there are many studies about the predictors of adverse neonatal outcome in these patients however optimal outcome predictors and timing of delivery are unknown. Serum TBA level > 40mmol/L were found to be associated with increased risk of meconium staining, low APGAR scores and stillbirth in recent studies [30, 31]. We found lower BW and lower gestational age at birth in pregnants with ICP than healthy pregnants similar with the literature due to our policy of early delivery of these patients. Our findings also showed that high RDW levels were associated with the incidence of meconium staining in pregnants with ICP.

In conclusion, the present study demonstrated an association between that serum RDW level and ICP for the first time in literature. RDW, an easy, inexpensive and routinely reported parameter in a routinely performed CBC test might allow significant diagnostic and prognostic information in patients with ICP. However, further studies with large sample sizes are needed to understand the causative role of RDW in pregnants with ICP.

Authors declare no conflict of interest.