Submit an article Author Guidelines Ahead Of Print Reviewers 2019
_20_FM_03_15_Ulutabanca

A 14-year-old male with a neck pain and hypoesthesia in the upper extremities was diagnosed with Chiari type I malformation (CMI) and syringomyelia. The posterior part of the occipital bone was removed via cranio-cervical decompression. The accuracy of measuring the posterior cranial fossa (PCF) and foramen magnum (FM) dimensions were evaluated and compared with the literature. The linear PCF and FM dimensions as well as volumes were measured using computed tomography (CT) images with different techniques.

The volume data were compared with similar data from literature. Use of the posterior fossa approach remains controversial when treating patients with minor little brain stem dislocation, small PCF, and or incomplete C1, but the approach can easily be applied if FM and PCF sizes are known. Linear measurements that were assessed for concordance with CT measurements had the best agreement. Quantification of PCF volume and high FM should be taken into consideration for differential diagnosis of tonsillar herniation and prediction of surgical outcome in CMI. (Folia Morphol 2015; 74, 3: 402–406)

Posterior cranial fossa (PCF) abnormality of the skull is a developmental disorder and its variations have widely been reported in the literature [2, 4, 9]. Chiari malformations, Dandy Walker malformations, spina bifida and craniovertebral junction disorders are the common forms of the structural abnormality [1, 7]. Knowledge of the morphological variations makes it possible to conduct optimal preoperative surgical planning, minimise retraction and reduce morbidity during PCF exposure surgery. In this paper, we report an unknown case of Chiari malformation of type 1 (CM1). Specifically, we present an elevated foramen magnum (FM) and altered shape and dimension of its border, as unique anatomical characteristics of this case. We provide a z-print model of the skull based on data obtained from computed tomography (CT) scan for 3 dimensional (3D) visualisation and evaluation in real time and explicitly give the dimensions and volumes of PCF and FM.

After the establishment of the symmetrical raw data, images were reformatted in the workstation. The measurement points were defined on the 3D reformatted image and their correspondent arrows were confirmed on the axial, sagittal and coronal planes. The best position to get the most accurate measurement was ensured by rotating the 3D reformatted image and checking the correspondent axial, sagittal and coronal views.

FM measurements (sagittal, transverse, circumference and area) were obtained from reformatted axial sections. The FM sagittal diameter (FMSD) was recorded as the greatest anteroposterior dimension of the FM and the FM transverse diameter (FMTD) was recorded as the greatest width of the FM. The FM circumference (FMC) and the FM area (FMA) were automatically given after tracing the bony margin of the FM (Fig. 1). Using a reconstructed CT 3D image, we measured clival length (from the basion to the top of the dorsum sellae), the supraocciput (from the internal occipital protuberance to the opisthion) [5]. 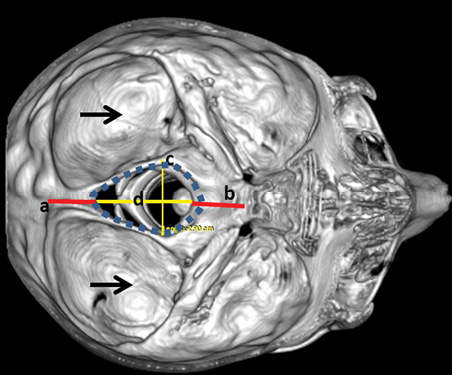 Linear measurements of the PCF

The skull of our case was printed using 3D printer (Z printer 450) (Fig. 2). Both radiological and calliper measurements (3D-CT) of the FM dimensions, supraocciput and clival length were also conducted on our case. Three parameters were analysed on printed skull. The measured parameters were: the length of clivus, the supraocciput, and the anteroposterior and transvers diameter of the FM (Fig. 2). 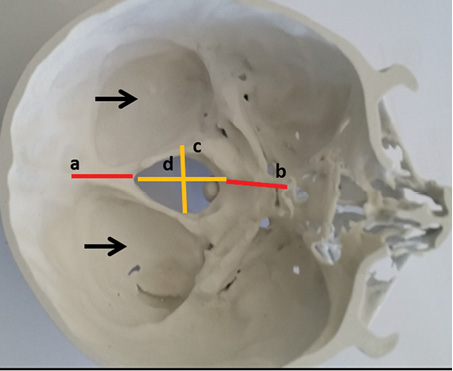 The PCF was defined as the osseous anatomical area with a floor formed by the occipital bone and the basisphenoid [11]. The extent of cerebellar herniation was measured from the tips of the cerebellar tonsils to a line drawn between the basion and opisthion [11]. We used Osirix program for ICV and PCF volume calculation. The Osirix program automatically added the area of each slice and then PCF volume was determined (Fig. 3). Calculated volume was obtained as the sum of the areas of the structure transects on consecutive systematic sections multiplied by the distance between sections. This program allows the user to determine contrast, select true threshold value to estimate counting automatically. 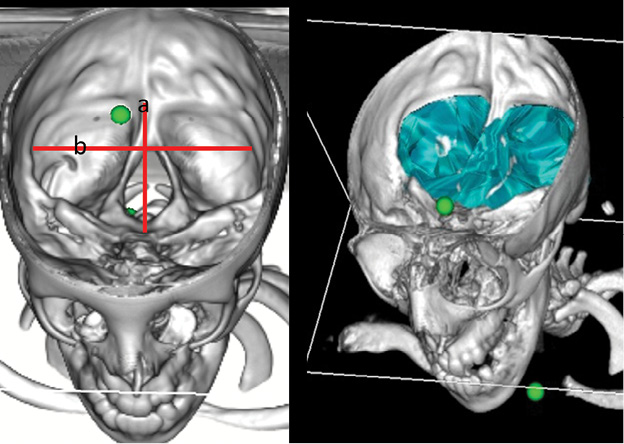 Figure 3. Reconstruction image of computer tomography of the abnormal skull. Antero-posterior (a) and transverse diameter (b) of posterior cranial fossa measurement and volume.

An adolescent male (14 years old) complaining of neck pain and numbness in upper extremities was presented to the clinics. The patient was neurologically evaluated and ordered for radiological head and neck examination. CT scan revealed normal cerebral structures and no calcification, but craniovertebral malformation. The diagnosis was CMI which manifested as syringomyelia. Our case has got more bony anomalies: C1 spina bifida, PCF anomalies and CM1.

The bonny abnormality had special anatomical features that have not been observed by our radiology team nor reported previously in the literature. To further explore the nature of the distinguished malformation, we displayed and closely examined the skull using 3D volume rendering after stripping off the skull bones in CT images with intensity thresholding. The structural abnormalities of PCF and FM were depicted by the arrows in Figure 1. The dimension and volumes were measured using manual segmentation on the volumetric CT data. In the figure, FM is seen as significant elevated and distorted as such its borders shaped more like ellipse with greater aspect ratio compared to a normal.

For real life visualisation, we next printed a physical model of the abnormal skull using 3D printer (Z printer 450, Z Corporation, Burlington, USA). The resulting model was shown in which antero-posterior and transverse diameter of PCF measurement and volume were seen in Figure 3.

Because the base of the cranium is so complex studying the shape of the FM, due to the important relation of the FM with its contents, is very interesting, from a descriptive and topographic point of view. The FM is a large foramen which is present in the base of the skull and considered as an important landmark.

Since the FM includes specific neuroanatomical structures and lesions in that region particularly require microsurgical intervention, choosing and establishing the most suitable surgical techniques need a careful planning mainly based on the FM size to prevent any neurological injury [6]. Moreover, intradural and extradural tumours, such as common congenital abnormalities as FM syndrome produced by atlanto-occipital assimilation, and cerebellar tissue herniations invaginating into the FM may lead to neural compression and even death is a commonly met pathological disorder in this region.

Sexual dimorphism determined by analysing the dimensions of the FM, which was about 3 cm wide by 3.5 cm antero-posteriorly, as reported by Uysal et al. [10]. Aydın et al. [1], who examined a retrospective cohort of 60 adult patients with CMIs, and made multiple measurements on magnetic resonance imaging, found that reduced mean length of clivus, reduced mean length of PCF, reduced height of supraocciput, increased anteroposterior length of FM in CMI reached statistically significant difference compared to controls.

In clinical and experimental studies, the cerebellar tonsillar herniation occurring in CMI is reported to mainly result from overcrowding of a normally developing hindbrain within a primary small and shallow PCF due to an anomaly in the embryological development of the occipital bone [1, 3, 4, 7, 9].

cm3 in the age and sex matched control group. Also, they found that the PCF volume in adult patients with CMI was 245.4

cm3. All studies noted a smaller PCF volume in the CMI patients. Our case PCF volume is smaller than other studies. Also, FM linear dimensions were larger than those in other studies. High FM and deep PCF have not previously been described in the literature.

In morphometric studies about PCF volume, significantly smaller volume or underdevelopment bony part of the PCF has been shown clearly [1]. Trigylidas et al. [9] found that mean PCF volumes was smaller in paediatric CMI patients than in control patients.

Dagtekin et al. [3] examined 15 adult patients with CMI. Multiple measurements were made on magnetic resonance images. The results were compared with the findings in 25 controls and 30 dry skulls. What was found is that the mean length of the supraocciput was significantly shorter and the average diameter of the FM was significantly longer in the CMI group when compared to the control group and dry skulls. Dagtekin et al. [3] found that the average amount of tonsillar herniation was 7.4 mm (range 4.9–12.1 mm) in CMI patients. Our case had 1.69 cm tonsillar herniation length.

In order to determine such malformations as Arnold Chiari syndrome, which shows expansion of transverse diameter, the knowledge of FM diameters is needed [9].

Our study has some advantages and some limitations. One of the advantages is the establishment of the real dimensions through radiological evaluation compared to the morphometric measurement. Therefore, dry skulls were evaluated through direct anatomic, morphometric measurement by the electronic calliper and CT with the comparison of each other. One case and no control is a major limitation. Recently, morphometric studies have clearly shown significantly smaller volume or underdeveloped bony parts of the PCF in adults [1–3, 5]. A significant smaller basiocciput in CMI group was demonstrated by Noudel et al. [8], but no significant difference was found in the length of the supraocciput and FM. No significant difference in the length of the clivus, basiocciput and spheniocciput between the CMI and the control group was reported by Nishikawa et al. [7].

Our study suggests that the PCF in our case is smaller than the one seen in the general population due to significant shortness of the basiocciput and supraocciput. But anteroposterior length and length of tonsillar herniation are higher than those in other studies.

What we can conclude is that a rapid and reliable diameter measurement technique tool is considered as useful for morphological differences of FM in view of the software requirement for 3D volume measurement. These devices and methods can be applied for surgical processes. Since measuring PCF volume and dimensions of FM becomes important in assessing the response to decompressive surgery or monitoring growth in patients with Chiari, other craniovertebral anomalies should be taken into consideration. We are of the opinion that the small PCF and high FM with Chiari-related cases would be useful if the operations are to be conducted in these cases.