Background: The aim of this study was to describe sectioned images and stereoscopic anatomic models of the maxillofacial area by using Visible Korean which are beneficial for medical education and clinical training in the field of orthognathic surgery.

Materials and methods: Serially sectioned images of the maxillofacial area of a cadaver were created. Significant structures in the sectioned images were outlined and stacked to build surface models.

Results: Browsing software (95.1 MB) and portable document format (PDF) file (142 MB) that were constructed are freely downloadable from our website (http://anatomy.co.kr). In the browsing software, the names of structures associated with malocclusion and orthognathic surgery could be viewed on the sectioned images. In the PDF file, surface models and stereoscopic maxillofacial structures were displayed in real-time.

Conclusions: The state-of-the-art sectioned images, outlined images, and surface models that were arranged and systematised in this study, may help students and trainees investigate the anatomy of the maxillofacial area for orthognathic surgery. (Folia Morphol 2015; 74, 3: 346–351)

Craniofacial dysmorphosis is characterised by functional and structural imbalances of the face [6, 7]. This dysmorphosis has diverse aspects such as malocclusion, asymmetry, apertognathia, retrognathism, or prognathism. Therefore, patients with these developmental deformities often need operative intervention such as orthognathic surgery. Unfortunately, a potential risk of damage to vital structures such as nerve injury or vessel perforation during these procedures can occur to a surgeon involved in the treatment of a patient with craniofacial dysmorphosis [8, 9, 17]. How to avoid and manage these complications provides practitioners with successful results. To become a skilful surgeon for this orthognathic surgery, anatomical knowledge of the maxillofacial area is profitable and it is surely necessary to experience many cases of operation. However, it is not easy to understand the stereoscopic shape of the anatomic structures and accumulate knowhow of surgery thoroughly in a short period.

Recent advances in computer graphic technology has resulted in the development of virtual three-dimen-sional (3D) dissection software that is primarily based on computed tomography (CT), magnetic resonance image (MRI), and sectioned images [1, 3, 10, 11]. This 3D software is of helpful to a student or a common user. However, it is not applicable to the operative patterns of surgical approaches, because it focuses on teaching anatomy. Furthermore, it is difficult for CT or MRI to describe it in detail because the anatomy of the maxillofacial area is complicated and is more complex by small size of the adjacent structures [10]. Therefore cross sectional images of the colour version, the resolution of which was higher than CT or MRI, were needed to create stereoscopic images that are helpful in surgery.

The purpose of this study was to represent state-of-art sectioned images and surface models of the maxillofacial area which were beneficial for medical education and clinical training in the field of orthognathic surgery. Another aim was to describe the browsing software and portable document format (PDF) file which enabled a user to access sectioned images easily and to access surface models of our datasets, respectively. Maxillofacial surgeons may be able to assess the complete data, with the aim of understanding the anatomy of the maxillofacial area and improving the surgical outcome. In addition, a comprehensive knowledge of maxillofacial anatomy may maximise the surgical predictability and avoid unfavourable complications. Moreover, virtual orthognathic surgery could be achieved by using the PDF file of this study.

Outlining of the sectioned images

We additionally made colour images of maxillofacial structures associated with malocclusion and orthognathic surgery (i.e., inferior alveolar nerve) manually on Photoshop CS5 (Adobe Systems, Inc., San Jose, CA, USA) with a lasso tool at 1.0 mm or 0.5 mm intervals (Table 1). If adjacent up-and-down outlines of a structure did not overlap, the continuity of the outline was broken in the reconstructed surface models. Therefore, we duplicated the outline of the adjacent previous layer, and then pasted it on the layer in progress. We also compared the structures of the ongoing layer with the previous layer. In this way, we outlined the sectioned images one by one. All outlines of each structure were then filled with a specific colour semi-automatically to make colour-filled images (pixel size, 0.1 mm; colour depth, 8-bit colour; file format, bitmap [BMP]) [4, 13, 14].

In our previous studies [5, 19, 21], browsing software was made of the sectioned and colour-filled images using C# language of Microsoft Visual Studio, NET 2003 (Microsoft Corporation, Redmond, WA). The images of this study were put into each folder of the browsing software. And with package software, Nullsoft Scriptable Install System of NSIS Media, operating files and image folders were transformed into one installation file (file name, Orthognathic_surgery.exe) (Fig. 1) [12].

We constructed surface models of colour-filled images associated with orthognathic surgery for this study. As a result, a total of 113 outlined structures have been surface reconstructed (Table 1). To create surface models, Mimics version 17.0 (Materialise, Leuven, Belgium) were used. In Mimics, colour-filled images in the BMP format were opened. We regulated their thresholds. They were then stacked continuously. The surface models were painted individually or by systems to differentiate the combined structures (Table 1). The colour of skin, muscle, bone and teeth was constituted semi-transparent to display inside (Fig. 2). 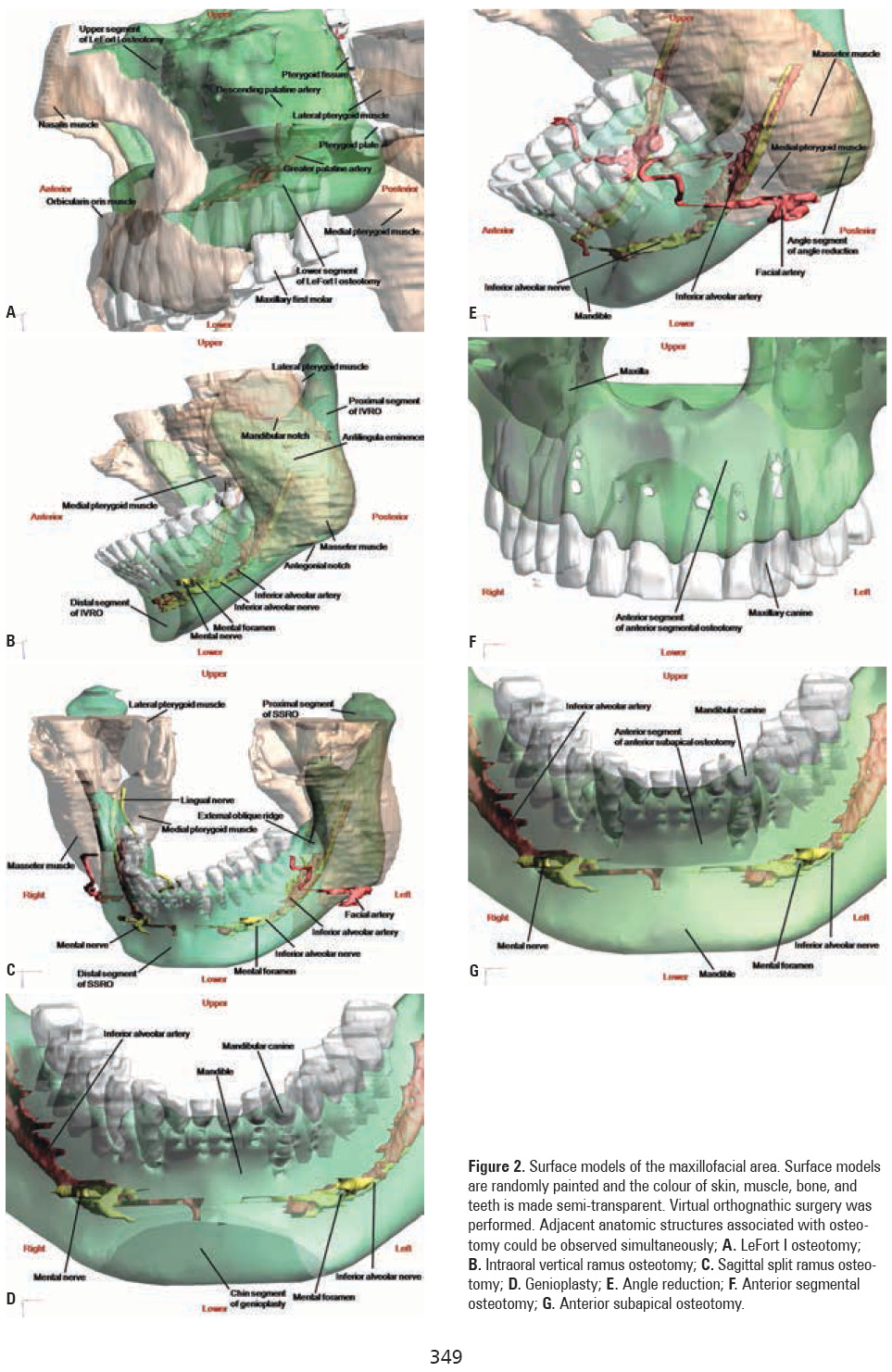 Improper surface models that resulted from inadequate outlining were adjusted by the maxillofacial surgeon and anatomist [4, 15, 16]. In this way, surface models were established. The formed surface models were saved as stereolithography (STL) files to be accessible on the Maya version 2012 (Autodesk, Inc., San Rafael, CA) (Fig. 2) [20, 21]. Using Maya, we performed virtual or-thognathic surgery (Fig. 2).

Using deep exploration standard (Right Hemisphere, San Ramon, CA, USA), STL files were classified into several structures and the surface models were organised in official anatomical names [2]. After the arrangement, all models in the STL files were assembled and saved as Orthognathic_surgery.pdf using the 3D Reviewer, accompanying software of Acrobat 9.0 Pro Extended (Adobe Systems, Inc., San Jose, CA, USA) [18, 20]. Because the PDF file was accessed in Adobe Reader, the anatomical names of the parts were presented in the model tree window.

The browsing software (file name, Orthognathic_surgery.zip; file size, 95.1 MB) and PDF file (file name, Orthognathic_surgery.zip; file size, 142 MB) that were constructed are freely downloadable from our website (http://anatomy.co.kr). The files can be accessed free of charge. In the browsing software, the names of the structures associated with malocclusion and orthognathic surgery were displayed on the sectioned images. In the PDF file, the surface models, and stereoscopic maxillofacial structures were displayed in real-time. The maxillofacial anatomy could be easily perceived by investigating the sectional images of the browsing software and the surface models of the PDF file as follows.

In the browsing software, the lateral pterygoid muscle and the superficial head of the medial pterygoid muscle were attached to the maxillary posterior area (Fig. 1a). The descending palatine artery descended through the greater palatine canal and emerged from the greater palatine foramen (Fig. 1a). By considering this, a user can comprehend a damage to the medial and lateral pterygoid muscle during LeFort I osteotomy may cause intraoperative haemorrhage and maintaining the integrity of the descending palatine artery is necessary to avoid excessive bleeding. Meanwhile, the user could observe the run of the branches of mandibular nerve (Fig. 1b). Therefore, the user can understand that an inaccurate mandibular osteotomy may cause nerve damage.

In the PDF file, the sigmoid notch was displayed as a concavity on the superior surface of the mandibular ramus between the coronoid and condyloid processes and the antegonial notch was displayed as a depression on the lower edge of the mandible, near the margin of the masseter muscle attachment (Fig. 2B). The antilingula eminence could be detected on the lateral surface of the ramus (Fig. 2B). As a result, a user can understand that two Bauer retractors should be simultaneously inserted into the antegonial notch and sigmoid notch and that cutting the ramus should be performed behind the antilingula eminence in the intraoral vertical ramus osteotomy (IVRO) (Fig. 2B). In addition, the user could observe the 3D structure of the inferior alveolar nerve, mental nerve, and facial artery in the PDF file (Fig. 2C). The mandible and the adjacent muscles can be designated in a semi-transparent colour. Therefore the user might keep in mind where the osteotomy lines should be located in the sagittal split ramus osteotomy (SSRO), angle reduction, or genioplasty (Fig. 2C–E). Meanwhile, osteotomy lines should be positioned on the interdental area to avoid damage of dental roots in anterior segmental osteotomy or anterior subapical osteotomy (Fig. 2F, G).

Based on this knowledge, virtual orthognathic surgery could be performed in the PDF file (Fig. 2). LeFort I osteotomy was performed in the maxilla. We could find the location of the buccal fat pad, pterygoid maxillary fissure, and descending palatine artery, etc. (Fig. 2A). IVRO and genioplasty were performed in the mandible (Fig. 2B, D). Adjacent structures such as the inferior alveolar nerve, mental nerve, and facial artery could be observed.

We have reported surface models of a cadaver head in a previous study [21], and they were helpful to understand the anatomical structures on the maxillofacial area. However, it did not represent vital structures of maxilla and mandible (i.e., inferior alveolar nerve). Therefore, in this study, we added a series of structures of maxillofacial area (Table 1) and described a virtual operative procedure associated with orthognathic surgery (Fig. 2) to get a better surgical outcome and reduce complications.

As to LeFort I osteotomy of the maxilla, our sectional images revealed the thinness of the maxilla and the location of the buttress (Fig. 1). Therefore, a user could recognise that strong manipulation was not required in sawing and where the osteotomes were positioned. And colour-filled images showed the medial/lateral pterygoid muscles and the pterygoid plexus (Fig. 1). A user could perceive that intraoperative bleeding of the maxilla was primarily associated with tearing of the medial/lateral pterygoid muscles, but not the pterygoid plexus [8]. Therefore almost minor haemorrhage can be managed by compression or by application of topical haemostatic agents. Our PDF file described the buccal fat pad, pterygoid plate, and descending palatine artery (Fig. 2). The buccal fat pad is posterior of the maxillary first molar and incision should be performed anterior to it to avoid the herniation of it. Meanwhile the descending palatine artery is closely located with pterygoid plate and the user keep in mind the manipulation of pterygoid plate could induce transection of descending palatine artery. In this case, vessel ligation of the source of bleeding is an appropriate approach.

In the mandibular osteotomy such as IVRO, SSRO, genioplasty, and angle reduction, sectional images revealed the location of mandibular or mental foramen (Fig. 1). Inferior alveolar nerve enters the mandible via mandibular foramen and exits via mental foramen. Thus the user proves that osteotomy line should be located over the mandibular foramen or under the mental foramen to avoid nerve damage. And the PDF file displayed stereoscopic skeletal structures such as the lingula, antilingula eminence, mandibular notch, antegonial notch, and external oblique ridge (Fig. 2). These are indicators for an osteotomy (lingula, antilingula eminence, and external oblique ridge) or for retraction (mandibular notch and antegonial notch). Therefore a user can understand the manipulation of the saw, osteotome or retractor. The PDF file also presents the stereoscopic location of the facial artery (Fig. 2). A user can understand that care should be taken in the mandibular inferior border osteotomy of SSRO or angle reduction to prevent intraoperative bleeding.

About the segmental osteotomy such as maxillary anterior segmental or mandibular anterior subapical osteotomy, the PDF file described stereoscopic shape and position of dental roots (Fig. 2). Therefore, a user can know where the osteotomy lines should be located to inhibit the injury to the dental roots.

This work (NRF-2012R1A2A2A01012808) was supported by Mid-career Researcher Program through NRF grant funded by the MEST.