Submit an article Author Guidelines Ahead Of Print Reviewers 2019
_07_FM_03_15_Ahmed_Curcumin

This study was performed to investigate the effect of curcumin on cardiac myosin-induced autoimmune myocarditis in rats and the change in thioredoxin (TRX) immunoreactivity in cardiomyocytes following curcumin treatment. Twenty-four six-week-old male Wistar rats were randomly allocated into 4 groups of 6 rats each. Group I received neither curcumin nor myosin. Group II received an oral solution of 1 g/kg/day of curcumin daily, from day 1 to day 21. To induce myocarditis, animals of both group III and group IV were injected by 1 mg of porcine cardiac myosin on days 1 and 8. In addition, animals of group IV received an oral solution of 1 g/kg/day of curcumin daily, from day 1 to day 21. Serum levels of creatine phosphokinase, troponin-T, tumour necrosis factor-alpha and interleukin-6 were estimated. Hearts were processed for histopathological and immunohistochemical studies. Serum biomarkers levels were significantly increased in myocarditis group as compared to other groups. The intake of curcumin significantly reduced the deviation in these markers. Sections of the wall of the heart from myocarditis group were characterised by inflammatory cell infiltration. Most of cardiomyocytes showed pyknotic nuclei and increased sarcoplasmic eosinophilia with strong immunoreactivity for TRX. Sections from myocarditis-curcumin group showed normal architecture with moderate immunoreactivity for TRX. The present study demonstrated that curcumin ameliorates acute myocarditis in rats and encouraged the estimation of serum level of TRX as a relevant indicator for the evaluation of the progress of acute myocarditis. (Folia Morphol 2015; 74, 3: 318–324)

Heart disease is one of the major health problems of advanced as well as developing countries in the world. In human, acute myocarditis is a potentially lethal disease, and frequently precedes the development of dilated cardiomyopathy [2].

Myocarditis is defined as myocardial inflammation accompanied with oedema, cellular infiltration, apoptosis, and necrosis of cardiomyocytes [13]. In acute myocarditis, an imbalance of the reactive oxygen species (ROS) and/or an inadequate cellular antioxidant defence mechanism may play a key role in myocardial injury [20]. Increased ROS are able to induce severe cardiovascular dysfunction by their direct attack on intercellular biomolecules such as contractile molecules or ion channels. Also, the imbalance of intracellular oxido-reductive state (redox) may lead to the activation of stress sensitive signalling pathways, increasing apoptosis and potentially contributing to the development of heart failure [18].

Cells have developed elaborate defence systems against oxidative stresses. Among those, a pivotal role of the thiol-mediated redox systems has been recognised. Thioredoxin (TRX) is a redox regulatory protein that protects the cells from various stresses by reducing activity of oxidised thiol groups on proteins. It was reported that TRX is up-regulated by acute inflammatory stimuli and may play an important protective role in the pathogenesis and development of myocarditis [14]. There are two major TRX: thioredoxin 1 (TRX1), a cytosolic and nuclear form, and thioredoxin 2 (TRX2), a mitochondrial form [16]. TRX1 binds with a variety of cellular proteins and inhibits apoptosis [1].

Cardiac myosin-induced myocarditis is a model of experimental autoimmune myocarditis (EAM) in rats to investigate autoimmunological mechanisms in inflammatory heart diseases. During the development of the disease, myosin first elicits a focal inflammation mediated by neutrophil and macrophage infiltration, which then triggers the activation of mononuclear effector cells and initiates the EAM [3]. This model of EAM is histologically similar to human myocarditis in acute phase, with the recruitment of macrophages, lymphocytes and neutrophils accompanying myocardial fibrosis [8, 20].

Curcumin, a yellow pigment from Curcuma longa, is a major component of turmeric and is commonly used as a spice and food-colouring agent by more than 1 billion people [6, 11]. Curcumin has a surprisingly wide range of beneficial properties, including anti-inflammatory, antioxidant, chemopreventive and chemotherapeutic activity [4]. It exhibits a great promise as a therapeutic agent, and is currently used in human clinical trials for a variety of conditions, including heart diseases [18].

This study was performed to investigate whether oral curcumin treatment has any protective effect on cardiac myosin-induced autoimmune myocarditis in rats and to demonstrate the possible changes in TRX expression in cardiomyocytes following curcumin treatment.

Twenty-four six-week-old male Wistar rats, weighing about 200–250 g, were housed under standard environmental conditions with free access to standard pelleted rat chow and tap water. The study followed the International Guidelines for the Care and Use of Laboratory Animals for experimental procedure.

Animals were randomly allocated into 4 groups of 6 rats each.

All animals were sacrificed on day 22 by cervical decapitation under ether anaesthesia. Truncal blood was collected and serum was separated from each animal for biochemical assay. The hearts were excised and processed for histological and immunohistochemical studies.

High-resolution whole-slide digital scans of all TRX-immunostained sections were created with a ScanScope scanner (Aperio Technologies, Inc.). The digital slide images were then viewed and analysed using the viewing and image analysis tools of Aperio’s ImageScope software. Five areas, each with the fixed size of 137,000 μm2, were randomly selected per section. To quantify the immunopositivity, the colour deconvolution (colour separation) algorithm (Aperio Technologies, Inc.) was set up (by colour calibration) so as to detect and quantify only the brown colour of DAB positive staining. The algorithm was then run on the selected area to measure the percentage of immumopositivity relative to the area being measured. The analysis output results were finally exported to Excel sheets and subjected to statistical analysis.

Data collected were subjected to statistical analysis using IBM SPSS Statistics version 22 software. The homogeneity of the obtained numerical data was first checked with Levene test and the homogeneity of variance assumption has been met. Analysis of variance (ANOVA) was used for an overall comparison between the study groups followed by Bonferroni as a post-hoc test for pairwise comparisons. Differences were considered significant when p was equal to or less than 0.05. A 95% confidence level was used to calculate a confidence interval, which is a range of values around the mean where the “true” (population) mean can be expected to be located, with 95% certainty.

H&E-stained sections of the wall of the mid-ventricular level of the heart from all rats of Group I and Group II showed normal architecture of cardiomyocytes and endomysium (Fig. 1A, B). 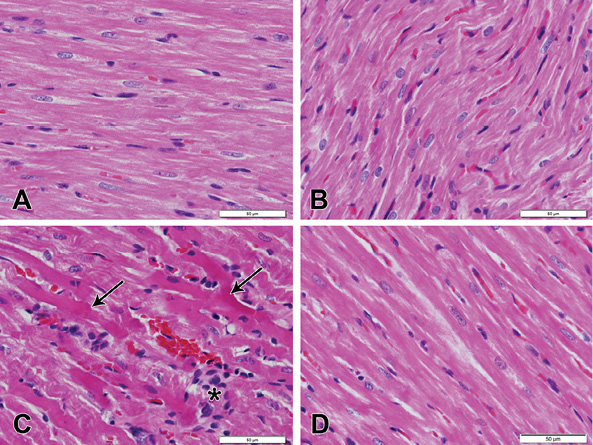 There were no pyknotic nuclei in the cardiomyocytes of both groups (Table 1). 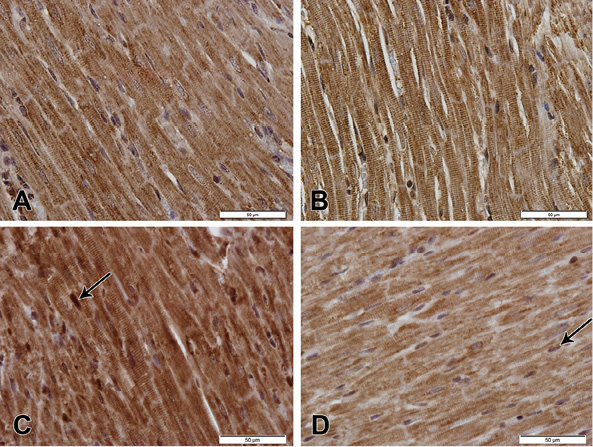 This group showed significant increase in the mean area per cent of strong positivity to 39.777 ± 7.297%, compared to Group I and Group II (Table 2).

Curcumin is the active ingredient in the traditional herbal remedy and dietary spice turmeric (Curcuma longa). Curcumin has a wide range of beneficial properties, including inflammatory, antioxidant, chemopreventive and chemotherapeutic activity [4]. The pleiotropic activities of curcumin are derived from its complex chemistry, as well as, its ability to influence multiple signalling pathways. Curcumin is a free radical scavenger and hydrogen donor that exhibits both pro- and antioxidant activities. Furthermore, curcumin is remarkably non-toxic and exhibits limited bioavaila-bility [6]. Studies performed on rats have confirmed a lack of significant toxicity of curcumin when administered orally with doses up to 5 g/kg/day [17]. To the best of the authors’ knowledge, the dose selected in the present study is the lowest dose of curcumin used.

In the present study, immunohistochemistry for TRX was performed to examine the possible involvement of a redox regulating mechanism in the pathogenesis of immune-mediated myocarditis. Sections of the heart from myocarditis group showed a significant increase in the mean area per cent of strong positivity for TRX compared to control and control-curcumin groups. Shioji et al. [14] suggested that enhanced TRX expression may be induced by ROS produced by infiltrating inflammatory cells in acute immune-mediated myocarditis which, in turn, induce translocation of TRX from the cytoplasm into the nucleus. The authors reported that TRX might have a protective role against the progressive myocardial damage in acute immune-mediated myocarditis. Such protective role could be explained by the ability of TRX to decrease protein oxidation, chemokine signalling, and leucocyte trafficking [16]. One simple explanation for the beneficial effect of TRX is that it scavenges ROS that would oxidise proteins, lipids and DNA [1]. Sections of the heart from myocarditis-curcumin group showed that the mean area of TRX expression in this group was significantly decreased compared to myocarditis group, while no significant difference was shown between myocarditis-curcumin and both untreated control and curcumin-exposed groups. The results of the present study suggested that administration of curcumin ameliorates cardiac myosin-induced autoimmune myocarditis in rats, as evidenced by the decrease in TRX expression in that case. The present suggestion was also supported by the significant decrease in the serum levels of both cardiac injury markers (troponin-T and CPK-MB) and pro-inflammatory biomarkers (TNF-α and IL-6) shown in curcumin-myocarditis group compared with myocarditis group. The effect of curcumin could be attributed to its antioxidant and anti-inflammatory properties. However, the precise mechanism of the protective effect of curcumin in the acute phase of autoimmune myocarditis needs further investigation. It has been shown that curcumin significantly decreased plasma levels of IL-8, IL-10, TNF-α and cardiac troponin I in cases of rabbits underwent cardiopulmonary bypass (CPB). Furthermore, the appearance of apoptotic cardiomyocytes significantly decreased in the curcumin-CPB group. It was concluded that curcumin ameliorated the surge of pro-inflammatory cytokines during CPB and decreased the occurrence of cardiomyocytic apoptosis after cardiac injury [19]. Regarding the limitations of the present study, the authors studied only the effect of curcumin on acute myocarditis. Therefore, a future study on chronic phase of autoimmune myocarditis would be essential. Also, measurement of the serum levels of TRX would be more accurate than TRX immunoreactivity in the wall of the heart performed in the present study. Due to the low number of evaluated animals in each experimental group, the obtained data will be selected only as supporting data in the human risk evaluation.

In conclusion, the present study demonstrated that oral administration of curcumin ameliorates cardiac myosin-induced autoimmune myocarditis in rats, as evidenced by a significant reduction of TRX immunoreactivity, as well as, of the serum levels of both cardiac injury markers (troponin-T and CPK-MB) and pro-inflammatory biomarkers (TNF-α and IL-6). The authors would recommend the use of curcumin as a prophylactic and therapeutic agent for acute autoimmune myocarditis in human and encourage the estimation of serum level of TRX as a relevant indicator for the evaluation of the progress of acute myocarditis cases.