Submit an article Author Guidelines Ahead Of Print Reviewers 2019
_13_FM_02_15_Pisiak

Background: False tendon (FT) is described in a wide range (40% to 62%) of the examined hearts depending on age and additional heart abnormalities. On echocardiography, the range is even wider (1.6–78%), depending on study design and inclusion criteria. Ultrasonographic characteristics of left ventricular FTs in the Polish population are not well known.

Materials and methods: Echocardiographic examinations of 1,679 consecutive patients were evaluated. All cases were classified according to American Society of Echocardiography Committee of Nomenclature and Standards Document on Identification of the Segments of the Heart Muscle.

Results: In our study, fibrous structures in the lumen of the left ventricle were detected in 100 (6%) subjects of the study group. The age of the subjects ranged from 16 to 87 years (mean age 47.9), 50 were males and 50 were females. In 94% of the subjects, FT was a single structure. No patient had clinically evident arrhythmia.

Conclusions: In the Polish population, FT can be identified in all age groups, and the prevalence is similar to that reported in the literature. (Folia Morphol 2015; 74, 2: 225–228)

False tendon (FT) is a strand of fibrous or fibro-muscular tissue, usually extending between interventricular septum and left ventricular (LV) free wall [15, 18]. FT does not connect to the mitral leaflets, can extend between 2 papillary muscles, and may cause an “innocent” heart murmur [7, 12]. Since the introduction of echocardiography in the clinical practice, FTs were described as thin elongated structures, usually benign, but also a potential location of infective endocarditis [4]. On echocardiography, such structure may potentially be misinterpreted as a ruptured tendon, vegetation or thrombus [3]. FT may be a lone finding or may coexist with other abnormalities of the heart structure [1]. In most cases FT is a single structure. Sporadically 2 or, rarely, 3 FTs can be found, sometimes configured in the shape of the letter Y. FTs of the right ventricle were also described in the literature [14].

The range of FT prevalence in the literature is very wide. It is described in 40–62% of the examined hearts depending on age and additional heart abnormalities. On echocardiography, the range is much wider, depending mainly on study design and age group, ranging 1.6–78% [11, 17, 21]. The prevalence of FT in a prospective echocardiographic study of 488 subjects, published in 1986, amounted to 25%. In a group of subjects with an innocent systolic murmur, the prevalence was as high as 76% in children, whereas in adults it was lower (40%) [17]. Of note, in the same study, the prevalence was substantially lower when assessed retrospectively (1.6% of 763 echocardiograms).

Prior to the introduction of cardiac ultrasound, FTs in humans were identified on autopsy. In a pathology study by Grzybiak et al. [8], the prevalence was about 40% and it was similar across all age groups. Loukas et al. [16] reported on FT prevalence in a series of 200 gross pathology specimens amounting to 62%. Embryogenetic origin of FTs was not fully elucidated; the most probable mechanism involves displacement of conducting fibres into the LV lumen. In microscopic studies, FTs consist of fibrous tissue, cardiomyocytes, blood vessels; they can also contain conducting fibres — pertaining to the left branch of the His bundle [15, 18].

According to a study in which 107 subjects from the Framingham population were followed up for 10 years, the presence of a FT as a lone finding did not affect survival. It was also noted that it occurs more frequently in individuals with low body mass index values and with other heart abnormalities [11].

The presence of FTs is sometimes linked to increased incidence of ventricular arrhythmia, especially in cases of LV enlargement, or during pregnancy [14]. FTs can also increase the probability of ventricular premature contractions during LV catheterisation. In the clinical research, the role of FTs in provoking ventricular arrhythmia, including idiopathic ventricular tachycardia, is unclear. Two potential mechanisms were considered: FT as a part of the conduction system or as a structure that causes excess tension in the Purkinje fibres in the septum, thus provoking arrhythmia [21, 23]. The incidence of arrhythmia on 24-h electrocardiogram (ECG) in healthy subjects with or without FT did not differ. Also, 2 cases with repolarisation abnormalities ascribed to FT presence were published [20]. In a study by Płońska et al. [19], the incidence of arrhythmia on 24-h ECG in 101 individuals with and without FT was similar. Consequently, according to Płońska et al. [19], the presence of FT in the LV in healthy individuals is not an arrythmogenic factor.

The aim of the study was the echocardiographic assessment of the prevalence and location of FTs in the LV in consecutive patients referred for transthoracic echocardiography.

False tendons were prospectively assessed in 1,679 consecutive patients referred for echocardiographic examination. FTs were identified in 100 (6%) patients (50 men and 50 women) aged 47.9 (16–87) years. The examinations were performed on a Phillips 11XE echocardiograph, with a 2–3.5 MHz phased array transducer, using standard echocardiographic views: parasternal long and short axis and apical 4-, 3- and 2-chamber.

False tendon was diagnosed when a typical strand of tissue in the LV, extending between LV free wall and interventricular septum, was visible in at least 2 projections. According to the former classification published in the American Society of Echocardiography (ASE) Committee of Nomenclature and Standards Report on the Identification of the Myocardial Segments [9] (dividing the LV lumen into 3 levels), FTs were classified as transverse (extending within 1 level), oblique (crossing 2 levels) or longitudinal — extending through all the 3 levels. 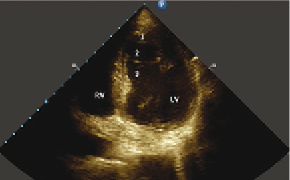 The most typical location was the apical portion of the LV (41%), and the least common — the subvalvular level of the LV. In 3 cases the course of the structure was longitudinal — that is, it extended through all 3 levels of the chamber — according to ASE classification (Table 1, Fig. 2).

Table 1. Location and extent of false tendons in the left ventricle in 100 subjects 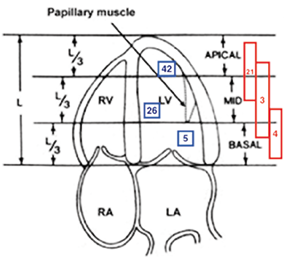 The significance of FT presence in the LV was not completely elucidated and the literature data are not unequivocal. In our group of 1,679 adult subjects, the prevalence of FT was 6%, i.e. relatively low, when compared to adult population of the study of Malouf et al. [17].

Apical location of the FT in our study was similar to that of the group of 107 subjects from the Framingham population [11], and it was also the most common site of the structure. Only 3 longitudinal FTs (i.e. extending through all 3 levels of the LV lumen) were found. Single FT was slightly more prevalent in our study group compared to the work by Kenchaiah et al. [11] (94%), and the prevalence of 2 or more tendons was slightly lower (double FT — 5%, triple FT — 1%).

As the examinations were carried out mostly in ambulatory patients, complete evaluation of the incidence and type of arrhythmia was not possible. On history, none of the examined individuals complained of irregular heart rhythm. No heart murmurs were identified during physical examination. The clinical profile of the study individuals included many conditions, such as LV hypertrophy due to arterial hypertension, chronic kidney disease and patients undergoing routine cardiac ultrasound check-up during chemotherapy.

No electrocardiographic criteria of LV hypertrophy were found in patients free of arterial hypertension, which seems to contradict the putative link between FT and LV hypertrophy suggested by Kenchaiah et al. [11]. Similarly, no features suggestive of a generalised infection or inflammation were identified in any of the patients in our study group. Therefore, it can be concluded that the presence of FT was an independent benign finding in all cases, unrelated to the primary disease, and that it can be called a benign anatomical variant. Sporadically, the presence of FT can have a role in the occurrence of ventricular extrasystole or idiopathic ventricular tachycardia requiring ablation [22, 23]. Data exist, suggesting that FT presence by itself is not an arrythmogenic factor in a healthy population [20]. However, a case of a double FT was described, in which one of the tendons was a site where polymorphic ventricular tachycardia originated (confirmed by an electrophysiology study). The arrhythmia resolved post-ablation [5].

In a study by Bhatt et al. [6], lesser degrees of functional mitral regurgitation were found in dilative cardiomyopathy patients with LV ejection fraction of < 30% and FT presence in the LV, as compared with similar patients without FT [6]. This can be explained by smaller mitral leaflet coaptation depth and area in patients with FTs. Also, certain ECG abnormalities have been linked to FT presence — in 1 case report, persistent ST segment elevation was described in a person with FT [13].

It should be underlined, that a detailed description of the FT may play a role in those interventions that involve manipulation within LV cavity (such as the ablation procedure), as it can incur technical difficulties [2, 10, 15]. In the autopsy study by Loukas et al. [16] in which ultrasound and morphological assessment were combined, an alternative classification of FTs was proposed. Sensitivity of the echocardiographic examination was markedly lower than that of endoscopic assessment (40.3% vs. 100%). It should be noted, that in 248 FTs, conduction system cells were found in these structures on histopathology only in 30% of the cases.

In the Polish population, FT can be identified in all age groups, being a single structure in a vast majority of cases, and its prevalence is similar to that reported in the literature. As, according to published data, a FT can be a source of murmur or arrhythmia and occasionally it can be involved in infective endocarditis, its presence should be mentioned and a description included in the report of a routine echocardiographic examination.