Submit an article Author Guidelines Ahead Of Print Reviewers 2019
_07_FM_02_15_Girgiri

The purpose of this study was to examine the morphometry of the foramen magnum of African four-toed hedgehog (Atelerix albiventris) in Maiduguri. Fourteen hedgehog skulls (7 male and 7 female each) were used for this study. The overall mean value of foramen magnum height and width were 0.51 ± 0.05 cm and 0.64 ± 0.04 cm while occipital condylar and interparacondylar widths were 1.00 ± 0.12 cm and 1.62 ± 0.07 cm, respectively. There was no significant difference between the two sexes. The foramen magnum index was 83.4 ± 5.51 cm in males and was significantly higher than 76.3 ± 6.37 cm observed in females. The presences of dorsal notches (occipital dysplasia) were observed, that were of three distinct types. It is envisaged, that the study will provide a valuable database on the anatomy of foramen magnum of hedgehogs in Nigeria for morphological, neurological, zooarchaeological, and comparative anatomical studies. (Folia Morphol 2015; 74, 2: 188–191)

The foramen magnum (FM) is a large opening at the base of the skull [6], providing exits for vital structures from the skull to the vertebral column [26]. It is laterally bordered by the occipital condyles [17], and is of variable shapes and forms [1]. FM serves as an important landmark for studies on skull and cranial evolutionary modifications [21], as sex determinants in forensic analysis [7], plays a role in determining ancestry of individuals [5] and has clinical implication in diverse fields of medicine [9]. Irregularities of the dimensions of FM and occipital bone are linked in human and animal to different neurological conditions [11]. Occipital hypoplasia or Chiari-like syndrome has been reported in some breeds of dogs [18, 23], equivalent to Arnold Chiari malformation in human [29], predisposing to syringomyelia, due to obstruction of cerebrospinal fluid through the FM [22]. Occipital dysplasia (dorsal notch) [11], concurrent with occi-pital hypoplasia were also reported in literature [4, 22]. However, the clinical role of occipital dysplasia is considered controversial [3]. There have been few reported studies with respect to FM in small mammals [2, 15, 27]. Basic information on metrical values and morphology of the FM in African hedgehogs has scarcely been reported in literatures. The goal of the present study is to document a database for the morphometry of FM in four-toed African hedgehog (Atelerix albiventris) found around Maiduguri, North East Nigeria.

A total of 14 adult hedgehog heads comprising 7 males and 7 females, were used for this study. The collected hedgehogs were hand-caught by local poachers/farmers around Maiduguri as described by Mouhoub-sayah et al. [13]. The heads were processed by hot water maceration technique in accordance with method described by Onar et al. [16] and Olude et al. [15]. The length and width of the foramen magnum and FM index were obtained as described by Olude et al. [15] and Yahaya et al. [31]. Landmarks of adjacent occipital bones were also determined using a manual Vernier calliper. The description of the indices measured is stated below and most are depicted in Figure 1. 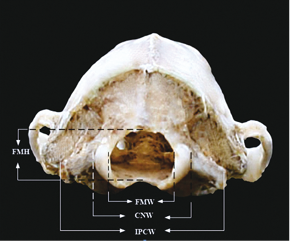 The data obtained were presented as means ± standard deviation and were analysed using statistical analysis package (GraphPad Instat® version 3.05); analysis for sex comparison was made using Student’s t-test with level of significance set at 5% (p < 0.05). Photographs of FM of each skull with different morphology were taken using a canon EOS 5D camera.

The morphological data of the foramen magnum obtained for male and female hedgehogs are presented in Table 1.

Table 1. Morphometric indices of the foramen magnum and occipital indices of African hedgehog

#All values are in cm except foramen magnum index which is an index; *Significant differences between means at the significant level of p < 0.05.

Figure 2. A, B, C. Caudal view of the skull of hedgehog (A. albiventris) skull showing morphological variations in shape of the mid-dorsal margin of foramen magnum.

The mean foramen magnum height and width of hedgehog in this study was 0.51 ± 0.05 cm and 0.64 ± 0.04 cm, respectively (Table 1). However, the mean values for the FM height and width for males was 0.54 ± 0.04 cm and 0.64± 0.03 cm while for females was 0.49 ± 0.06 and 0.64 ± 0.04 cm, respectively (Table 1). These were considered not significant. In contrast, Olude et al. [15] observed significantly higher values in FMW of male African giant rat, whereas in Pekingese dogs significant gender difference was observed in FMH [24]. In this study the mean FMI in males was observed to be significantly higher than in females and this was due to higher foramen magnum heights in the latter. The mean FMI of 79.8 ± 5.94 in hedgehogs was below 100, corresponding to studies of Olude et al. [15] in African giant rat, Kahvecioglu et al. [12] in rabbit and Simoens et al. [24] in Pekingese dogs but contrary to observations in adult humans [25], camel [31], West African dwarf goat [14] and dog [10], which were above 100. The mean values of occipital condyle and interparacondylar width reveals no significant difference between the two sexes. However Yahaya et al. [31] reported a significantly larger interparacondylar width in male camels.

In this study, the presence of dorsal notch (Occipital dysplasia) was observed, and was of three distinct types (Fig. 2A–C). Similar findings were reported in African giant rat [15], camels [31] and some breed of dogs [18, 22, 23]. This is seen as a defect in dogs, arising from incomplete ossification of the ventromedial part of the supraoccipital bones [28], and resulting in widening of the FM. The malformation of the FM and occipital bone in relation to their clinical implication, are commonly investigated in different breeds of dogs [3, 23, 28]. However, the clinical role of occipital dysplasia in particular, is debatable. Grimm [8] and Janeczek et al. [10] considered dorsal notch as an ancient feature, which is compatible with longevity. Whereas Watson et al. [28] stated that the dorsal notch is a morphological distinction, arisen from differences in supraoccipital bone ossification. In some breeds of dogs, occipital dysplasia has been reported with either asymptomatic [30], or associated neurological symptoms [20]. In our study, no neurological symptoms were observed. This agrees to finding of Janeczek et al. [11], and Watson et al. [28]. In contrast, our findings differ with the view of Watson et al [28]; that the prospect of dorsal notch incidence is low in dolicocephalic skull to which hedgehog belongs.

In conclusion, there is a need for further research to explore the possibilities of relating occipital dysplasia to wobbly hedgehog syndrome, a common neurological disease of uncertain aetiology in hedgehogs [19]. The morphometric data of the FM across the sexes of African four-toed hedgehog (A. albiventris) and the findings obtained from the study will form a good baseline data for further research, and may find application in the field of morphology, zooarchaeology, neurology, and comparative anatomy.