3Department of Visceral and Vascular Surgery, University of Magdeburg, Germany

Pancreatoduodenectomy (PD) is the procedure with 100 years history and is accepted as treatment of choice in pancreato-biliary area malignancies [12]. The pancreas is composed of two embryo buds resulting in complicated configurational anatomy of pancreatic duct [8]. Many investigations are carried out analysing anatomical, technical, physical and histological factors related to complications of pancreatic anastomosis. Simultaneously discussion of superiority of technical variants of operation is ongoing. A large effort is made to find the best management. Short time efficacy of surgery is measured usually by means of complications and mortality rate after PD [18, 19, 28]. The large series indicate the influence of parenchyma texture, pancreatic duct size, intraoperative blood loss and patient comorbidity [1, 7, 11, 22, 24]. The late outcome of PD is monitored by oncological results and quality of life. The objective of pancreatic remnant condition is established on the basis of pancreatic function preservation and imaging criteria [16, 24, 27]. Several investigators supposed to find the correlation between the technique of pancreatic remnant anastomosis and its function [9, 16, 27]. The reduction of glandular tissue, pancreatic remnant duct patency, deficiency of duodenal stimulation to pancreas and inactivation of pancreatic enzymes are considered important factors of maldigestion related to pancreatic function [24]. The pancreatic remnant duct dilatation in postoperative course is thought to be the symptom of progressive remnant damage or outflow obstruction related to anastomosis method or technique [27].

The study protocol was approved by Local Ethic Committee of Medical University of Gdansk, Poland (No NKEBN/485-236/2009). Twelve patients after PD were identified in outpatient clinic. All participants signed informed consent to participate in the study according to the protocol. The mean patients’ age was 66.3 (from 43 to 77) years, the male-female ratio was 8:4. Patients underwent PD from 3 to 86 (mean 36.6) months prior to the enrolment. The primary diagnosis, treatment administrated, weight maintenance, body mass index (BMI) are summarised in Table 1.

Table 1. Clinical data of patients concerning pre- and postoperative course after pancreatoduodenectomy or other pancreatic resection

Three-phase (arterial, pancreatic, and portal venous phases) contrast-enhanced multi detector computed tomography (MDCT) was performed with a 64-slice MDCT scanner (LightSpeed VCT; GE Healthcare) for 6 patients. A dose of 1.0 mL/kg body weight of the 300 mgI/mL nonionic contrast material Iohexol (Omnipaque, GE HEALTHCARE AS, Norway) was administered intravenously at a rate of 3 mL/s by means of a power injector (Auto Enhance A-50; Nemoto Kyorindo, Tokyo, Japan). The scanning delay was individually determined with a test bolus injection technique. Pancreatic phase images were obtained after scanning of the arterial phase imaging during a single breath hold with an interscan delay 10 s. The mean injection to scan delay for arterial phase imaging was 21.7 s and that for pancreatic phase imaging was 33.7 s. The example of image is shown on Figure 1. 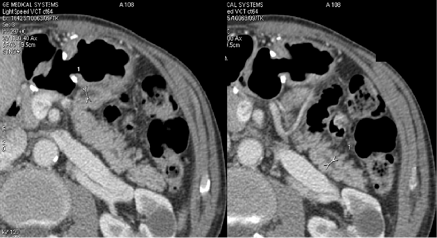 For the subsequent imaging analysis, the pancreatic phase images of 2.5-mm collimation obtained with 64-slice MDCT. From these axial images of 0.625-mm to 2.5-mm slice thickness, oblique-coronal multiplanar reconstruction (MPR) images of 0.7-mm slice thickness were generated at 0.7-mm intervals on a computer workstation (Advantage Workstation 4.4; GE Healthcare) by broad-certified radiologist who was the study coordinator. All data were compared to the situation prior to the surgery is available. Pancreatic remnant was digitally measured, pancreatic volumetry (Fig. 2) as well as pancreatic duct diameter at the anastomosis and proximal to it. 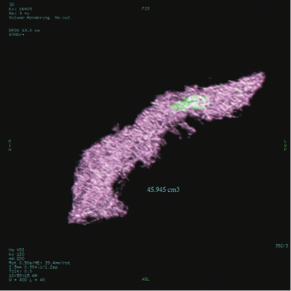 The biology of pancreato-biliary malignancy resulted in limited number of patients suitable for long term follow-up.

Uncomplicated PD resulted in several inconvenience for the patient after recovery. Some of them are the results of new configuration of digestive tract, food intake limitation, dietary restriction, intolerance and malabsorption. The other relatively late problem after PD is pancreatic exo- and endocrine malfunction. The reason of pancreatic exocrine insufficiency is thought to be the pancreatic glandular tissue deficit, remnant duct occlusion or permanent pancreatic enzyme inactivation in the stomach acid environment [17]. There are data confirming the time dependent pancreatic duct dilatation within few months after PD [24, 27]. The pylorus preserving PD is thought to be beneficial concerning lower risk of postoperative dumping syndrome and stomal ulceration [23]. Some experimental data confirm the difference in the pancreatic remnant changes after different anastomosis technique applied [4]. The most data support the beneficial use of duct-to-mucosa PJ [4, 27]. This technique gives the best opportunity to control the patency of pancreatic duct during surgery and gives perfect adaptation of mucosa-to-mucosa resulting in the lowest risk of late scar stricture [10, 28].

Our series revealed, similarly to some other authors, more frequent increase of pancreatic remnant duct diameter after PG comparing with PJ. This observation did not correspond to clinical manifestation of pancreatic exocrine insufficiency.

Many cohorts are based on limited number of patients ranging from 19 to 73 [9, 13, 16, 20, 24–27]. Surprisingly, the largest series from Hyodo et al. [13] documented negligible pancreatic duct dilatation after PG and no symptoms of exo- and endocrine insufficiency. However, Japan group use clinical criteria of pancreatic exocrine function. Authors described in details PG modification with pancreatic stump invagination and gastric mucosa approximation [13]. This observation on the largest available group might guide the discussion back to technical details and material used to manage pancreato-enteral anastomosis as the detrimental factor of late operatively outcome. The biology of the primary reason for PD resulted in small group of follow-up series. On the other hand, chronic pancreatitis patients after PD are not candidates to be compared because of ongoing inflammatory process of pancreatic remnant and progressive damage resulting in pancreatic function loss. Ishii et al. [14] analysed postoperative pancreatic juice output and exocrine function based on 13C-dipeptide-(Bz-Tyr-Ala) breath test after PD. Small group operated with Roux-en-Y reconstruction presented marked difference in pancreatic juice volume and amylase concentration. All patients with primary diagnosis of chronic pancreatitis (CP) and pancreatic cancer (PC) presented significantly lower values than duodenal papillary carcinoma one [14]. All patients with primary PC met also microscopic criteria of CP in the remnant on transection site. The proportion of fibrosis to glandular tissue at pancreatic transaction site of PD performed because of PC ranges from 47% to 55% in different series [15, 27]. Similar result is observer in presented series.

Our short series revealed no clinical difference between PG and PJ in follow up.