Submit an article Author Guidelines Ahead Of Print Reviewers 2019
_20_FM_04_14_Pachowicz

4Chair and Department of Cardiology, Medical University of Lublin, Poland

Coronary artery fistulae (CAF) are anomalies related to coronary artery abnormal termination. This is a very rare congenital malformation accounting for about 0.2–0.4% of congenital cardiac anomalies, but in some patients it can be haemodynamically important.

We are going to present 2 patients with bilateral CAFs to the pulmonary trunk without signs of the rest or stress ischaemia in MPI. (Folia Morphol 2014; 73, 4: 514–520)

Coronary artery fistulae (CAF) are anomalous connections bypassing myocardial capillary network. It can be located between a coronary artery or one of its branches and the cardiac chamber lumen (coronary-cameral fistulae) or an extracardiac blood vessel, most commonly one of the great vessels: pulmonary trunk, pulmonary vein or superior vena cava (coronary-vascular fistulae) [4].

The coronary arteriovenous fistulae affect 0.002% of general population. The prevalence of this anomaly varies in literature, it is estimated that up to 0.4% of all congenital anomalies of the heart are CAF which are detected in up to 0.8% of patients undergoing coronary angiography [1, 3, 4, 16].

The fistulae are most commonly congenital, but can also be acquired. Most of them are small and asymptomatic [4, 7].

Radionuclide myocardial perfusion imaging (MPI) is a widely used modality in cardiac ischaemia evaluation and its importance is still growing despite alternative diagnostic tool development such as computed tomography (CT) or magnetic resonance imaging. The number of studies performed has significantly increased in the last decade [6].

MPI was performed at the nuclear medicine department. In both cases the 2 day protocol was used with a 48-h delay between rest and stress studies.

A stress test was performed using a cycloergonometer. The initial load was 25 watts and was increased by 25 watts every 3 min until the submaximal heart rate was achieved under constant electrocardiogra-phy (ECG) monitoring and cardiologist supervision. Then the radiotracer was given intravenously and physical exertion was continued for 1 min.

Both the rest and stress ECG-gated SPECT studies were done 60 min after intravenous injection of 740 MBq (20 mCi) of 99mTc-sestamibi. For acquisition we used: in patient 1 — gamma camera Varicam (Elscint, Haifa, Israel), in patient 2 — Symbia T16 SPECT/CT hybrid gamma camera (Siemens, Erlangen, Germany) with additional low-energy CT study to provide the attenuation correction. The acquisition was performed with 2 gamma cameras in orthogonal configuration, in 32 views, 25 s for each with head movement of 3 degrees between views.

The studies were evaluated using dedicated workstations including both visual examination and semi-quantitative analysis using the following software: in patient 1 — Cedars-Sinai, in patient 2 — Invia Corridor 4DM.

Fifty-year-old male, with the history of acute coronary syndrome and percutaneous coronary intervention on the origin of his right coronary artery (RCA) with bare metal stent implantation, while staying abroad visited a local cardiologist due to the typical symptoms of the myocardial ischaemia. The stress test performed on a treadmill using Bruce protocol revealed multiple-lead ST segment depressions, so a coronary angiography was scheduled and carried out. The angiography showed “de novo” stenosis in the middle segment of the RCA (Fig. 1) as well as an abnormal vessel arising from its proximal segment and communicating with the pulmonary trunk (Fig. 2). 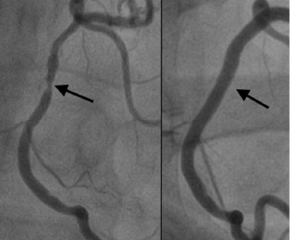 Moreover, a second malformation was discovered in the proximal segment of the left anterior descending artery (LAD). It was a complex anomaly including a fistula draining to the pulmonary trunk. The mild stenosis of the LAD (branch of left coronary artery) at the origin of the first diagonal artery was also present (Figs. 3, 4). 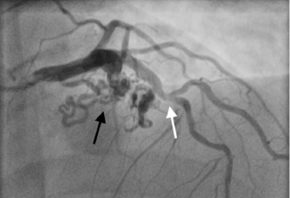 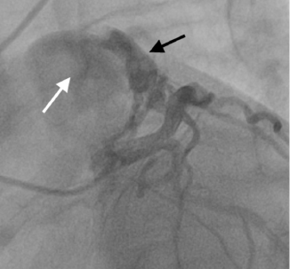 The angiography was followed by a successful coronary angioplasty of the RCA with the drug eluting stent implantation.

MPI was recommended for further evaluation of the anomalies’ possible impact on the patient’s condition. The study protocol described above was used. During the stress test sestamibi was injected intravenously at the heart rate 162 bpm (90% of maximal heart rate calculated for the patient). No features of cardiac ischaemia were present in the ECG during the physical exertion, which was well tolerated. No chest pain or other symptoms of ischaemia were reported by the patient. Both rest and stress studies revealed no significant ischaemia. Rest motion and thickening were normal and left ventricular ejection fraction (LVEF) was 58%. After the stress test the motion and thickening of the interventricular septum were slightly worse and LVEF was 54% (Figs. 5, 6). 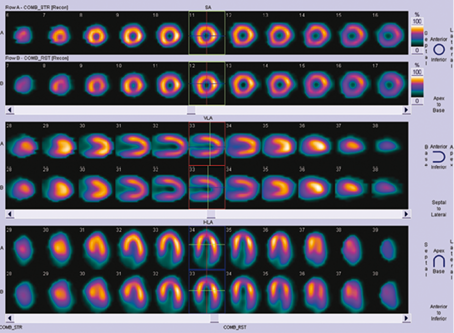 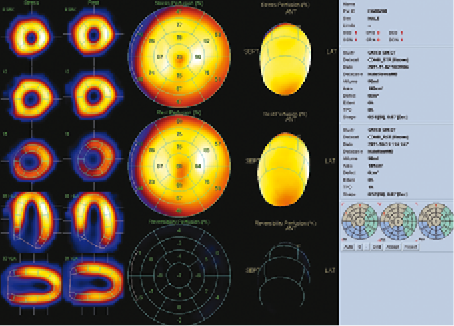 The study revealed critical stenosis of the large second obtuse marginal branch of the left coronary artery and borderline stenosis of the origin of the first marginal branch. Additionally, 2 malformations were found: a plexiform anastomosis originating from the right coronary sinus draining to the pulmonary trunk (Fig. 7) and a similar anastomosis between the middle part of the LAD and the pulmonary trunk (Fig. 8). 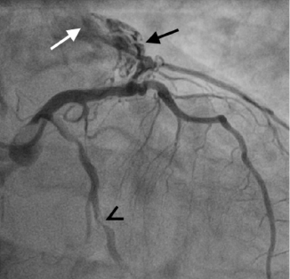 During the stress test a radiotracer was injected at the heart rate of 120 bpm (80% of maximal heart rate calculated for the patient). Physical exertion was poorly tolerated nonetheless ECG presented no signs of ischaemia. Heart rate increased rapidly and the patient was quickly fatigued, but she did not report any distressing symptoms.

The rest study revealed no significant ischaemia both in no-attenuation correction and attenuation correction images, only mild ischaemia of the apical lateral segment was suggested after detailed evaluation. No abnormal motion or thickening of the left ventricle muscle was found with LVEF 77%. Stress study presented no significant differences compared to rest study. LVEF was 79% (Figs. 9, 10). 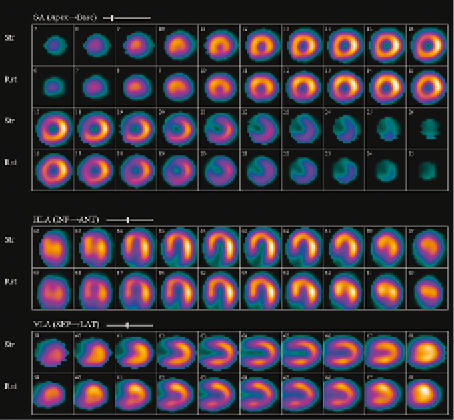 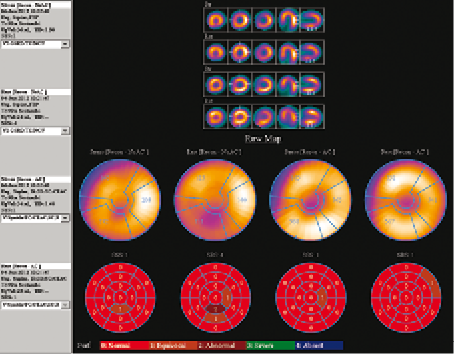 Based on the symptoms and the stress studies the decision of the percutaneous coronary intervention was taken. The uneventful intervention on the marginal branch with a bare metal stent implantation was performed. After this procedure the patient remained asymptomatic and in good general condition.

Most frequently, the CAF originates from the RCA, less commonly — from the LAD. The circumflex branch of the left coronary artery is rarely affected [4]. In some studies though, the proportions were different. Said’s et al. [13] reported LAD as the most common point of origin for CAF. In the same study, the unilateral fistula was reported in 80%, bilateral in 18% and multilateral in 2% of patients.

The point of termination for CAFs is most commonly the pulmonary trunk, less frequently the right-sided heart chambers, left atrium, superior vena cava or coronary sinus, rarely the left ventricle [12, 13].

Large CAFs may lead to the steal phenomenon resulting in reduced blood flow in the area of arterial supply [7]. The size of such a connection, when a fistula becomes haemodynamically significant and signs and symptoms develop, is about 200% of the coronary vessel. Thus, symptoms and complications are less common in young patients, but the risk increases with age as the fistula enlarges. This may eventually lead to severe complications: myocardial ischaemia sudden cardiac death, endocarditis or secondary aortic and mitral valves dysfunctions [1, 4, 13].

The CAF is challenging as many patients remain asymptomatic or their symptoms mimic different heart diseases. The patient may complain of dyspnoea, fatigue or angina. The physical examination may reveal different murmurs due to the fistula itself or secondary to valvular dysfunction, alterations in pulse or even congestive heart failure signs [4, 13].

Radionuclide modalities have also been used in the evaluation of patients with CAFs, but available information is mainly limited to single cases. Rubini et al. [11] evaluated 9 patients with known CAFs. MPI with 99mTc-sestamibi detected ischaemic changes in areas corresponding to coronary arteries with fistulae only in 2 patients. There are multiple cases reported with different types of CAFs who underwent MPI. Obtained results range from normal stress and rest perfusion to significant ischaemia in different patients [2, 8, 14, 15]. Still only a small number of patients with CAF suffer from cardiac ischaemia related to this anomaly [11].

The CAF require a multidisciplinary approach and an evaluation may be completed by cooperation of the cardiologist, radiologist and nuclear medicine physician.

In the presented cases no interventions were taken on the coronary fistulae as there were normal MPI. Since both patients remain asymptomatic and in good condition, the treatment strategy based on radionuclide method seems accurate. This strongly suggests that information provided by MPI may enable proper selection of patients requiring invasive treatment and avoid unnecessary risk in those who do not need it.