1Chair and Department of Histology and Embryology, Medical University of Warsaw, Poland

In addition to haematopoietic cells which differentiate into blood cells, bone marrow contains a stromal component, the complex of cells which provide the environment (a niche) for maintenance and differentiation of blood cell precursors.

Haematopoietic cells derive from the so called haematopoietic stem cell, a multipotent cell able to proliferate and differentiate into all types of blood circulating cells.

MSC were first isolated from bone marrow stromal cultures by Friedenstein (1976) [3], who described them as “mechanocytes”. These cells are able to differentiate both in vivo and in vitro into osteogenic cells, thus are considered as osteoblast precursors and are widely used as osteogenic cells for tissue engineering purposes and for bone repair/healing. The bone marrow itself, as a rich source of osteoprogenitors, or isolated bone marrow-derived stromal cells propagated in vitro are both used as a source of osteogenic cells for bone reconstruction [1, 8, 11].

In this communication paper a comparison of bone formation in the mouse kidneys by syngeneic whole bone marrow cell suspension and by a suspension of bone cultured marrow stromal cells was undertaken.

Three-month old female syngeneic Balb/c mice weighing 25–30 g, bread in the animal room of the Chair and Department of Histology and Embryology of our University, were used in accordance with the Medical University of Warsaw guidelines for the care and use of laboratory animals (permission no. 54 of Ethical Committee granted to Dr Ryszard Galus). Institutional guidelines for the care and treatment of laboratory animals were observed. The mice were kept up to 8 per cage with free access to mouse chow and water. For surgery mice were anaesthetised with an intraperitoneal injection of 0.15 mL of 0.36% chlorohydrate. Animals were sacrificed by cervical dislocation.

Bone marrow cells were flushed out from femoral cavities by syringing with minimal essential medium (MEM, Gibco, UK). Pooled marrow from several animals was centrifuged and the cell suspension was used either immediately for transplantation into the kidneys or for stromal cell culture for later use.

For freshly-harvested marrow cells, the contents of 2 femoral cavities (ca 10 × 106 of nucleated cells) were suspended in 0.5 mL of MEM and injected in 0.1–0.15 mL into the surgically exposed right kidney of experimental mice, each mice therefore receiving 2–3 × 106 cells.

The bone marrow cell suspension was cultured in Falcon plastic flasks (Corning Life Sciences, USA) in the MEM supplemented with foetal calf serum and antibiotics (Penicillin/Streptomycin, PAA laboratories GmbH, Austria). Two–four days later the medium was replenished and flask-adherent stromal cells were cultured for a further 8 to 30 days. Cells were trypsinised with 0.25% trypsin solution (Gibco, Scotland) and detached with a rubber scraper, washed in phosphate-buffered saline and ca 1 million of cells were injected into surgically exposed kidney. The viability of cells was ca 80%, as estimated by the trypan blue exclusion test.

The efficiency of the graft cell response was determined by the presence of bone in the kidney examined histologically. For the analysis paraffin-embedded 10 µm serial sections were stained with haematoxylin and eosin.

SPSS 19 software (IBM SPSS Statistics, Armonk, NY, USA) was used for statistical data processing. The comparison of the incidence of bone formation by whole bone marrow and by stromal cells grafting was evaluated by analysis of 95% confidence interval (CI).

The numbers of grafts performed and the incidence of bone formation following short term (8–10 days) and long-term (15–30 days) stromal culture administration are presented in the Table 1.

Administration of whole bone marrow cell suspension into kidney parenchyma of syngeneic recipient mice as evaluated 10–15 days post grafting or 16–30 days post grafting gave similar results. The incidence of bone formation was lower than expected, reaching 25% of cases (Table 1). In all instances bone trabeculae were formed by intramembranous ossification, with out any cartilage formation. Bone trabeculae were usually covered by osteoblasts, but bone marrow was observed inside ectopic bone only in 3 out of 18 cases of older bone (Fig. 1) 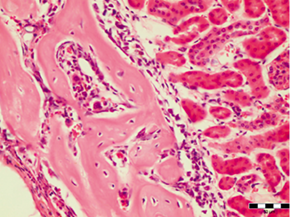 Surprisingly, injection of cultured stromal cells resulted in a markedly lower incidence of bone formation than followed administration of whole marrow cell suspension. In only 4 out of 101 implanted mice was the evidence of renal osteogenesis. Further-more, osteogenesis occurred exclusively following injection of cells from short-term (5–8 days) stromal cultures. In a group of stromal cells cultured longer, for 15–20 days, no bone formation was observed (Table 1).

The incidence of formation of bone following implantation of whole bone marrow cell suspension into kidney parenchyma by the technique used here was rather low. The reason for it could be leaking of grafted cells from the kidney during manipulation (insertion) of exposed kidney to locate it back into abdominal cavity or during presence there. The number of injected cells exceeded the minimum known to initiate osteogenesis in the muscles [9, 14].

One can consider that the extent of bone in heterotopic transplants of marrow stromal cells increases with increased mesenchymal stem cell number, and a threshold number of MSC is necessary for bone formation. A high local threshold density of bone marrow stromal cells is needed for formation of bone [9]. The need of sufficient bone marrow concentration to trigger bone formation was earlier reported also by Tavassoli et al. (1971) [14].

The protocol of MSC cultures applied in our experiment could, at least in part, explain the low incidence of bone formation. We have cultured stromal cells in standard medium on plastic. Expansion of MSC on conventional tissue culture plastic attenuates in vitro osteogenic differentiation and in vivo osteogenesis. To maintain osteogenic differentiation potential, the MSC should be propagated on collagen matrix [10].

Another reason for a poor osteogenic capability of marrow stromal cells grafted into the kidney could be the lack of added osteogenic differentiation factors to the culture medium, such as PTH, TGF-B, BMP, vitamin D. Such conditioning distinct increases differentiation [4, 12, 13].

Nevertheless, the primary bone marrow stromal cell culture was greatly inferior to freshly-isolated whole bone marrow in osteoinduction. Whole bone marrow cell suspension on introduction into kidney parenchyma resulted with bone formation in only 25% of mice, a value less than expected, and as was reported by others on subcutaneously implanted bone marrow cells [6].

The technique of bone marrow stromal cell culture applied in this experiment was simple and the tissue culture medium was not fortified by osteotropic agents.

To our knowledge, this is the first report on osteogenesis incidence by freshly-isolated bone marrow cells and by marrow stromal cell cultures in the mouse kidney.

The results presented in this paper indicate for a limited utility of intrarenal administration of presumably osteogenic cells for the examination of their bone-forming capability in mice. Low incidence of osteogenesis in the applied model could be in part explained by improper ratio of the volume of cell suspension to the volume of the injected kidney and thus by leaking of grafted cells from kidney, so the critical cell density is not achieved.

In mice, the technique of intrarenal administration of syngeneic bone marrow cells for in vivo evaluation of their osteogenic potency is not reliable as the incidence of bone formation in this model is low, nor exceeding 25%.

We thank Dr Wynn Parry from the University of Liverpool for critical reading of the manuscript and Mrs. Ewa Wiśniewska for laboratory work.