Giant coronary artery aneurysm is rare. A 71-year-old female was referred to our hospital 3 months after onset of symptoms. Work-up including coronary angiogram and computed tomographic angiogram helped a definite diagnosis of a giant aneurysm of the circumflex coronary artery. The patient was conservatively managed with a close follow-up. In this article, this rare lesion was presented with associated anomalies. (Folia Morphol 2014; 73, 3: 370–373)

Both solitary and multiple CAAs involving the Cx were described in the literature. Assiri [1] reported a solitary one extending 6.6 cm in diameter being the largest one of the time, which was not scheduled for a surgical intervention. Multiple CAAs involving the Cx have been previously described [15]. Giant aneurysm of the Cx is even much rarer. It may be associated with a fistula communicating to cardiac chambers [20], or to the coronary sinus [6]. However, a giant CAA is rarely associated with coronary tortuosity. This report describes a unique case of CAA of the Cx associated with tortuosity and coiling of the coronary arteries, aortic valve regurgitation, and tortuosity of the radial artery.

A 71-year-old female was referred to this hospital due to facial and pedal oedema and exertional chest distress for 3 months. She also complained of paraesthesia of her right leg, and Parkison’s symptoms like gait disorders and tremor, etc. She had been diagnosed with coronary artery disease (CAD), and thus took daily trimetazidine consecutively for many years. Echocardiography in a local district hospital suggested a congenital aorta-pulmonary fistula 7 months prior to admission. On admission, her vital signs were normal. An intermittent grade I–II/VI systolic drum-like murmur could be audible by cardiac auscultation in a few heartbeats when the patient was in a supine position. Elevation of the left main bronchus and left atrial oesophagus impression were seen on chest roentgenogram by a barium swallow. Electrocardiogram showed sinus rhythm with occasional premature atrial contractions with a heart rate of 76 bpm. Echocardiography revealed moderate aortic valve regurgitation, and enlarged left atrium (39 mm), and dilated ascending aorta (40 mm) and pulmonary trunk (32 mm). Cardiac angiograms were performed via right radial artery. The catheter insertion was eventually successful after careful repeated trails through 3 tortuous segments of the radial artery (Figs. 1A, B). 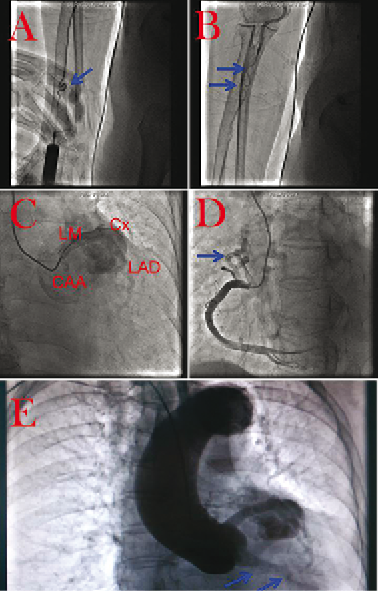 Coronary angiograms revealed a convoluted LAD, a giant CAA arising from the Cx (Fig. 1C), and a smooth RCA but with an upwardly convoluted branch (Fig. 1D) without significant stenosis. Aortogram demonstrated moderate aortic valve regurgitation in addition to the findings of the coronary angiograms (Fig. 1E). Chest computed tomography showed dilations of the ascending aorta and pulmonary artery, and a giant aneurysm adjacent to the ascending aorta, left atrium and left ventricle (Figs. 2A, B).

Computed tomographic angiogram illustrated a giant CAA of the Cx with intramural thrombus formation and calcified aneurysmal walls (Figs. 2C, D). The coronary arteries were diffusely dilated with focal calcifications (Figs. 2E, F). Tortuosity of the left anterior descending coronary artery and colling of the upward right coronary artery branch could be seen on three-dimensional (3D) reconstruction of computed tomography (Figs. 2G, H). She was diagnosed with a giant CAA of the Cx, diffuse dilation and tortuosity of the coronary arteries, dilations of the ascending aorta and pulmonary artery, aortic valve regurgitation, and tortuosity of the radial artery. The patient’s family preferred a conservative treatment. The patient was treated with intense anticoagulant, calcium-antagonist, and beta-blockage, and withdrawal of trimetazidine. Her symptoms were relieved, and she was discharged home. She was doing well free of symptoms at a 2-month follow-up.

CAAs are of atherosclerotic, systemic inflammatory (Kawasaki disease, Behcet’s disease, and Takayasu’s aortitis, etc.), or congenital etiologies [7]. Patients typically manifest symptoms similar to those of CAD, and therefore it is often misdiagnosed as angina pectoris [5]. The management of CAA includes medical, surgical, and interventional treatments. Medical treatment with antiplatelet and anticoagulant agents is effective in preventing from progress of the CAA and potential complications [8]. Surgical management is reserved for symptomatic patients, patients with progressing CAAs, or those with complications, such as CAD [19]. Aggressive surgical excision or plication is indicated for the CAAs that progress and are pending to rupture [17]. Ligation, excision, plication, and aneurysmorrhaphy, and cardiac transplantation in extreme occasions, have been performed with success [17]. Stent deployments causing coronary aneurysm months or years after the procedure have been reported [8]. In spite of satisfactory results of early postoperative period, long-term outcomes of bypass grafts in patients with giant CAAs secondary to Kawasaki disease remain to be evaluated [2]. Patients with Behçet’s disease with coronary artery involvements carried higher postoperative morbidity and reintervention rates after cardiothoracic interventions [21]. Therefore, CAA patients are likely to be restrained in terms of aggressive surgical or interventional therapies.

Arterial tortuosity is not an uncommon vascular morphological abnormality. The prevalence of coronary tortuosity was 39.1% with significant female preponderance [12]. Tortuosity of the artery was categorised into 3 types: 1) tortuosity: the artery straggles into “C”, “U”, or “S” forms; 2) coiling: the artery convolutes into 1 or more arterial loops on its axis; and 3) kinking: the artery convolutes and forms into an acute angle. Arterial kinking often leads to the onset of symptoms, whereas arterial coiling does not [11]. Coronary tortuosity is benign, but may be associated with angina pectoris, cardiac arrhythmias, and myocardial stunning [13]. The detection rate of coronary tortuosity was not high, and this disorder implicates confounding with CAD due to similar symptoms to angina. Luo et al. [14] observed that intravenous cinepazide maleate injection 320 mg per day for consecutive 14 days resulted in considerable improvements of symptoms and electrocardiogram alterations.

Trimetazidine is a safe, effective agent for the treatment of angina pectoris. It has been proved to be as good as propranolol (120–160 mg/day) and nifedipine (40 mg/day) in relieving anginal episodes and improving exercise tolerance [3]. However, trimetazidine may induce parkinsonism, or exaggerate previously diagnosed Parkinson’s disease [16]. Parkison’s symptoms may be resolved or improved after trimetazidine withdrawal [18].

In conclusion, a giant CAA of the Cx is rare. In patients with mild symptoms without critical complications or an associated fistula, and in those with diffuse dilation of the coronary arteries, a conservative treatment may be preferable for the prevention of potential postoperative complications.