Submit an article Author Guidelines Ahead Of Print Reviewers 2019
_22_FM_03_14_Yuan_Glandular

Cardiac myxomas (CMs) are the most common primary heart tumours in adults, accounting for 50% of the cases [65]. Diverse clinical manifestations and malignant behaviours of this benign neoplasm have attracted considerable interest [33]. Multipotential undifferentiated mesenchymal cells are believed to be the origin of CM [30]. Instant studies revealed that CMs are neoplastic rather than thrombogenic in origin, as mesenchymal cells represent divergent differentiations [1, 14]. Pathological changes representing differentiations, such as chondrification, calcification, ossification, extramedullary haematopoiesis, thymic remnants and mucin-producing glands occasionally found in CM, indicating a neoplastic origin arising from foregut remnants [76]. Immunohistochemical evidences of indifferentiated mesenchymal cells, non-metastatic nature in most cases [16], gland-like, epithelium-lined cystic and tubular spaces with features of the mesothelioma [22], and ultrastructurally proved active secretional structures [21, 23, 32] also supported the neoplastic origin theory. Nevertheless, the organising cardiac intramural thrombi and papillary endocardial lesions of histological features similar to those of CM challenged the neoplastic origin hypothesis [64], and the exact origin of CM still remains disputable [3]. Furthermore, histology, histochemistry and immunohistochemistry of CM have been sufficiently studied; whereas pertinent aspects of glandular CM have not, due to the rarity of the glandular differentiation. As estimated in the literature, glandular CM are rare representing about 5% of CM [38]. The aim of this article is to present the structural and immunohistochemical features of glandular CM by a case report with literature review, and to further discuss the origin of CM.

A 51-year-old female had abrupt vision loss 6 months prior to current admission. She was then referred to a nearby hospital and was diagnosed with “top of the basilar” syndrome and cardiogenic shock caused by a left atrial myxoma. She also developed multiple arterial embolisms of her lower extremities involving bilateral anterior tibial, bilateral posterior tibial, right popliteal and bilateral dorsal arteries as evidenced by ultrasonography. Her condition was gradually stabilising after prolonged treatment. She was recently referred to this hospital for surgical treatment of left atrial myxoma. After admission, the diagnosis of left atrial myxoma was confirmed by echocardiography and chest computed tomogra­phy. Her vital signs were normal. Precordial systolic murmurs were only audible in a sitting position on the 5th morning after admission. She was conscious but apathy, with bilateral blepharoptoses and poor pupillary light reactions. Her left pupil was 4 mm and right pupil was 2 mm in diameter. She showed poorly upward, downward and adducted eye movements, and slightly decreased right lower limb muscle strength but symmetrical deep tendon reflexes.

Left atrial myxoma resection was performed under cardiopulmonary bypass. During the operation, the myxoma was found to be originated from the free wall of the left atrium. The myxoma was resected en bloc, and the iatrogenic atrial wall defect was repaired with an autologous pericardial patch. She had a delayed aesthetic awakening until postoperative hour 13.5 with no new neurological sequelea. She had an uneventful postoperative course and was discharged home on postoperative day 19. 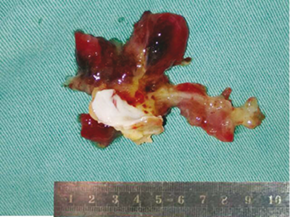 Figure 1. Gross appearance of the myxoma, which was grossly villous, polypoid.

The myxoma was brown in colour, uncapsulated and broadbased without a pedicle. On the cut surface, the myxoma was gelatinous and semitransparent with partially haemorrhagic and cystic regions. Microscopically, the myxoma was composed predominantly of scattered stellate, spindle-shaped, or polygonal myxoma cells, with small endothelial vascular channels lying in a loose myxoid stroma.

Glandular structures were focally located at the base of the myxoma dispersed in the loose amorphous stroma (Fig. 2). 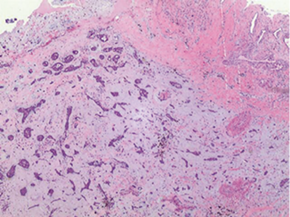 Figure 2. Glandular structures were focally located at the base of the myxoma; HE × 25.

Some glands had obvious lumina, while others did not. Gland fusions were noted (Fig. 3). 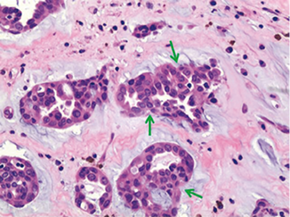 In overall, the glandular structures were well-developed by irregularly arranged single columnar, cuboid, or flat cells. There were a few goblet cells with cytoplasmic mucin vacuoles. No obvious atypia, mitosis, or necrosis was present. 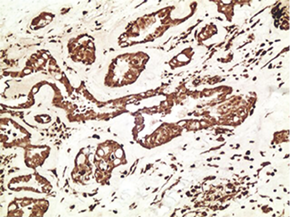 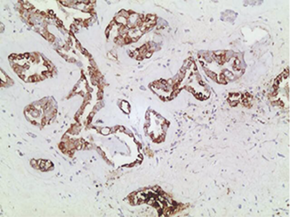 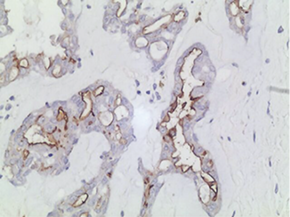 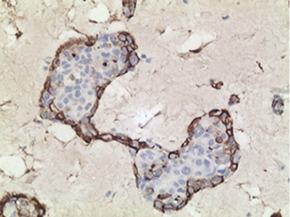 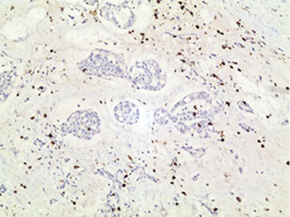 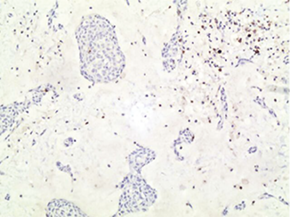 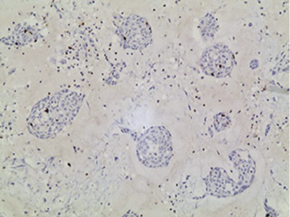 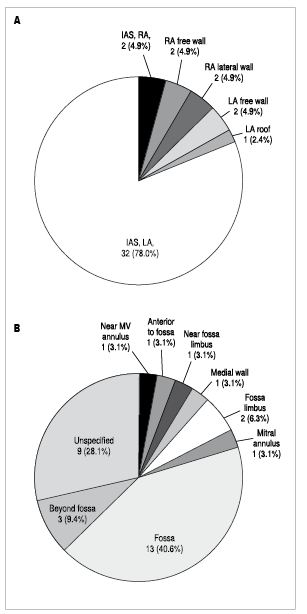 CM showed two patterns of glandular structures: glands separated from myxoma cell islands are termed as Pattern 1, and glands within the myxoma cell islands are termed as Pattern 2 [47]. Glandular structures were predominantly present at the base or the pedicle of the CM [1, 14]. The well-developed glandular spaces were lined by a single layer of cuboidal to tall columnar cells, with the presence of scattered goblet cells [79], surrounded by amorphous extracellular myxoid material [41]. In 5.56% (3/66), additional glandular and pseudocystic elements were found. The proteoglycan-rich myxoid and vascularised stroma also contained dendritic cells, macrophages and scattered lymphocytes [61]. The cyst-like spaces are lined by epithelium-like cells, from tiny gland-like structures to the larger cystic spaces [5]. Basal membrane or cilia can be absent in the glands [1]. Regular, columnar goblet cells indicate well-developed glandular structures [36]. In addition to cells with intracellular lumina, there are some goblet or signet ring cells with bluish cytoplasmic mucin vacuoles [38].

Secretory epithelium dispersed in a myxoid mucinous stroma may lead to a misdiagnosis as a very well-differentiated mucin secreting adenocarcinoma [43]. Glands may be composed of cells with irregular hyperchromatic nuclei of various size and shape and distinct large nucleoli indicating the potential transferrable and differentiating capacities of CM [17]. Focal stratification, tuft formations and micropapilae were seen in the glandular structures [1]. Rupture of glands into the stroma [22], apparent transition from flattened and spindled myxoma cells to plump glandular cells [22], transition from typical myxoma cells to cord-like myxoma cells [60], paradoxical transition from epithelial cells to myxoma cells [14] and direct links between glands and perivascular myxoma cells [60] were also observed. Small areas of benign glands in close contact with the adenocarcinoma and metastases to the lung, kidney, left adrenal gland and bones were reported [20].

The glandular epithelium has been histochemically and immunohistochemically identified a gastrointestinal or enteric nature of the epithelium. Periodic acid Schiff (PAS)-positive cytoplasmic globules and strong immunoreactivity against cytokeratin were demonstrated in the cuboidal and low columnar simple epithelium [12]. PAS and Alcian blue (AB) stainings were positive in 3 places of glandular structures of myxoma: the gland lumina, the goblet cells and the brush border, where mucus was generated [38]. Basal positivity for PAS and apical positivity for AB and mucicarmine were noted [40].

Immunohistochemically some endothelial markers, such as CD31, CD34 and Factor VIII, are present in myxoma cells. Positive staining has also been reported for S100, calretinin, vimentin, desmin, smooth muscle myosin, CD56, α1-antitrypsin and α1-antichymotrypsin [25], and interleukin-6 [27]. Willebrand factor was only detected in endothelial cells lining vascular channels and deep invaginations of surface papillae [53].

Positivity to CEA is a characteristic of endodermal origin, indicating that the myxoma cells are of capacities of the endoderm cells [29]. The satellite cells express simultaneously S100 and synaptophysin (Syn), suggesting the origin of myxoma may be associated with the endocardial sensory nerve tissue [13]. The staining of CK reactivity was observed mostly in the surface lining cells [19]. In the case with glandular differentiation, the positivity was both within the glandular component and the surrounding myxoma cells [17]. Vimentin, EMA, pan-CK, CK7, CEA and calretinin were positive in the glandular structures and variably in stellate cells and blood vessels [40]. Pan-CK and CK7 were strongly positive along with EMA and CEA, whereas CK20 was negative in the glandular structures, indicating a possibility of entrapped foregut rest origin of CM [40].

p53 protein immunoreactivity could be an indicator for discrimination between neoplastic and reactive mesothelium [49]. Generally, the regular glandular structures showed rare nuclear p53 staining. Foregut remnants, bronchial or alveolar epithelium, mesothelium and germ cells have been supposed as the origin of the glandular structures. Uncommon proliferative activity was considered “reactive” atypia, in the CM with glandular differentiation, the mitotic index and degree of atypia, with striking variation in size and shape of nuclei were more likely an early malignant behaviour than reactive process [17]. Ki-67 represents the proliferation rate, and studies of CM on this aspect revealed a slow proliferative rate [50]. Pucci et al. [48] reported that a very low proliferative activity (< 2%) was detected in glandular cells of case 3 by means of Ki-67 immunoreactivity. Berger et al. [8] noted that the proliferation rate with Ki-67 was less than 10% in the benign glands of CM and about 80% in the malignant glands of the adenocarcinoma and the systemic metastases.

The myxoma cells bear some similarities with mesothelial cells [38]. Expressions of both epithelial and vascular antigens reflect the multipotential nature of myxoma cells. Heterotopia in CM provides evidence to the theory of a pluripotent reserve cell line of origin arising from embryonic rests [42]. Differential diagnoses of CM include intracardiac thrombus, cardiac excrescence and other primary or metastatic cardiac neoplasms [9]. Immunohistochemical study can meet the satisfaction of the differential diagnosis [9]. Glandular CM have to be distinguished from a metastatic carcinoma as small areas of benign glands resemble adenocarcinoma [20, 46]. Nevertheless, atypia and mitosis are rarely present in the former [71]. CM, renal angiofibrolipomas and thyroid adenoma presented considerable atypism at the same time, and therefore CM may be in accord with the hamartoma in view of histogenesis [31]. Side-by-side malignant and benign glands could be detected in the small transitional zone between myxoma and adenocarcinoma, indicating transferable capacities of the myxoma cells [8].

Glandular CMs are morphologically characterised by base locations, focal distributions and well-developed structures in most cases with low proliferative and metastatic natures. They might derive from entrapped embryonal rests of a precursor cell toward epithelial and mesenchymal lineages. Differentiated glandular structures present in CM cells, other than in the thrombus, support the neoplastic origin of CM. Well-developed glands with basement membranes, junctional complexes and apical secretory granules revealed by ultrastructural studies also support the neoplastic origin of CM.