The family of paired box (Pax) genes constitutes a group of developmental genes with a highly conserved paired domain, which encode nuclear transcription factors [24]. Evidence from mice and human embryos indicates that Pax genes play an important role in early mammalian embryogenesis. Furthermore, the members of the Pax genes family have been shown to play critical roles in the formation of the nervous system as the restricted expression pattern along the craniocaudal and dorsoventral axes of the neural tube during early embryogenesis has demonstrated [21].

Except for Pax1 and Pax9, all Pax genes are spatially and temporally expressed during the development of the central nervous system [24]. At early developmental stages, Pax3, Pax6 and Pax7 are expressed in almost the entire developing neural tube, only Pax6 is excluded from the mesencephalic roof [24]. In later stages, the expression of Pax3/Pax7 is retracted with a rostral limit at the level of posterior commissure, while Pax6 expression in the forebrain persists during embryogenesis and even in certain structures in adulthood [17]. For the second group of late expressed Pax genes (Pax2, Pax5, Pax8), the midbrain-hindbrain boundary is believed to be the rostral limit [10, 16, 24]. Several animal studies have revealed the importance of Pax2 gene in the establishment and maintenance of the midbrain/hindbrain organiser region, which has been shown to control the development of the midbrain and cerebellum [1, 14, 23].

Despite numerous investigations on Pax genes in animals, only limited results exist about the developmental role of human Pax3 and Pax6 genes [5, 20], while the data about Pax2 genes in the human nervous system formation are very scanty [18, 19]. Therefore, the aim of this study was to determine the temporal and spatial expression of Pax2 protein during the early stages (Carnegie stages [CS] 10–20) of spinal cord and brain development in human embryos. The period from CS 10 (approximately 22–23 days of development) to CS 20 (approximately 51–53 days of development) is critical, as during that time all important changes take place in the size, shape and complexity of the developing brain and spinal cord [11].

Three-µm thick paraffin sections mounted on SuperFrost slides (Menzel-Gläser, Germany) were deparaffinised and rehydrated. Peroxidase activity was blocked by 0.6% H2O2 (Fluka, France) in methanol. Sections were washed in PBS (pH = 7.4) and after that in distilled water (3 × 2 min). The slides were irradiated with 0.001 M citrate buffer (pH = 6.0) for 10 min using a microwave oven (Daewoo, model No KOG-840P) at 98ºC. The slides were treated with normal 1.5% goat serum (Gibco, Invitrogen, USA) for 30 min at room temperature and incubated with the primary antibody Pax2 (4 µg/mL dilution in 0.1 M PBS, abcam, UK) overnight at 4°C in a humidity chamber. The primary antibody used was rabbit polyclonal antibody to Pax2 (abcam, ab23799), which has been reported to perform excellently in immunohistochemical applications with paraffin embedded human samples [13] as well in Western blotting applications with human tissue samples [6].

On the next day, the sections were incubated with the universal secondary antibody (Vectastain ABC Universal Kit, Burlingame, USA) for 30 min at room temperature. Peroxidatic activity was detected with DAB (3,3’-Diaminobenzidine; Vector, USA) and the sections were counterstained with haematoxylin. The labelling was expressed by a subjective scale ranging from 0 to 3 (0 — no staining, 1 — weak staining, 2 — moderate staining, 3 — strong staining; Fig. 1). 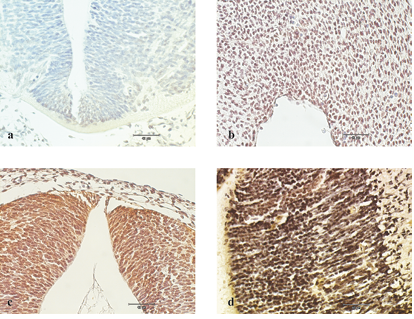 Figure 1. A set of micrographs of the developing human spinal cord illustrating the criteria for evaluation of the staining intensity; a. 0 (no staining); b. 1 (weak staining); c. 2 (moderate staining); d. 3 (strong staining).

Immunohistochemistry negative controls were performed by omitting the primary antibody. The evaluation was performed by 2 independent observers in a blinded fashion. The mean of estimations was calculated and used for statistical analysis. The data were analysed by Kruskal-Wallis test (nonparametric ANOVA) with the level of significance set as p < 0.05.

The expression of Pax2 protein was detected in the forming neural tube and the developing spinal cord of human embryos at all the studied stages of development. However, variations seem to exist in immunostaining intensity at different developmental stages (Table 1).

Table 1. Expression of Pax2 in the developing spinal cord and brain

If Pax2 expression in CS 10–14 was relatively weaker in the developing spinal cord, then stronger expression was found in CS 16–20. Statistically significant weaker expression of Pax2 was found in the embryos of CS 10 as compared to CS 16–20 (Table 1, Fig. 2). 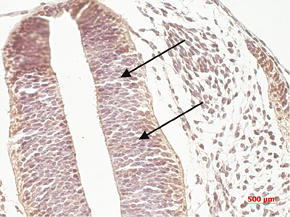 Figure 2. Transverse section of the spinal cord of the human embryo at CS 12. The arrows indicated the ventricular layer of the developing neural tube, where weak expression of Pax2 was detected.

In the embryos of CS 16–20, Pax2 was detected in the ventricular (neuroepithelial) layer, mantle layer and also in the marginal layer of the developing spinal cord (Table 1, Figs. 3, 4). 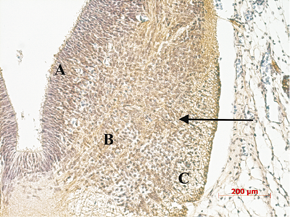 Figure 3. Transvere sections of the spinal cord of human embryo at CS 18; A — ventricular layer; B — mantle layer; C — marginal layer, arrow indicates the anterior horn. Expression of Pax2 in the ventricular, mantle and marginal layers.

Figure 4. Transverse sections of the spinal cord of human embryo at CS 16; A — ventricular layer; B — mantle layer; C — marginal layer; a. Expression of Pax2 in the ventricular, mantle and marginal layer; b. Negative control, where during processing primary antibody was omitted.

Expression of Pax2 was also detected at the junction of the caudal midbrain and the rostral hinbrain in the developing brain — strong Pax2 staining was seen in the region of the isthmus at later stages, CS 16–20 (Fig. 7).

Figure 7. Transverse section of the isthmus region in human brain at CS 20; a. Strong expression of Pax2; b. Negative control, where during processing primary antibody was omitted.

In this study, Pax2 protein immunostaining was analysed in the developing nervous system in human embryos at CS 10–20. The results of the study demonstrated a spatially and temporally restricted expression pattern of Pax2 in the developing spinal cord and brain.

In the early stages of development (CS 10–14), the forming spinal cord and brain vesicles consist of neuroepithelial cells, which extend over the entire thickness of the wall and divide rapidly to constitute the ventricular (neuroepithelial) layer [9, 11]. In our study, moderate PAX2 immunostaining was noted in the wall of the forming spinal cord during these early stages (Table 1). Throughout the following stages, Pax2 protein expression increased and staining was stronger during CS 16–20 compared to CS 10 (Table 1). Furthermore, some regional differences in Pax2 staining were seen in these later stages (CS 16–20) where the wall of the forming spinal cord has differentiated into the ventricular, mantle and marginal zones. Differences were noted in the staining intensity between the dorsal and ventral parts: in the dorsal part of the developing spinal cord, expression of Pax2 was seen in all three layers at CS 16–20, but in the ventral part, staining was weak in the ventricular layer and Pax2 protein expression was mainly seen in the mantle and marginal layers. Spatial differences in the expression of Pax2 in the forming spinal cord of human embryos have also been found by other researchers. Terzic et al. [19] determined Pax2 expression in human embryos at CS 17 in the outer parts of the ventricular zone of the developing spinal cord, while Pax2 signal was missing in the ventral quarter of the ventricular zone. More extensive reaction was also described in the dorsolateral plates than in the ventrolateral plates [19]. Tellier et al. [18] detected Pax2 expression in the dorsal part of the germinative zone in human embryos of CS 14–18, and some cells of the alar plate, but not in the forming anterior horn. Spatially restricted expression of Pax2 in the developing spinal cord has also been demonstrated in studies on mice [10] and chickens [2]. Thus, according to these findings, Pax2 can be considered one of the key regulators in the combinatorial action of transcription factors which determine the fate of specific populations of early neurons.

In our study, Pax2 protein expression was also found in all the 3 brain vesicles, prosencephalon (forebrain), mesencephalon (midbrain) and rhombencephalon (hindbrain). In early stages, CS 10–14, Pax2 staining in brain vesicles was relatively strong, especially when compared to that seen in the developing spinal cord in the same young embryos. The most significant difference was noted at the earliest stage — CS 10 (Table 1). However, at later stages, CS 16–20, the strongest Pax2 expression was found at the junction of the midbrain and the hindbrain (Fig. 6a). This is in concordance with studies on chicken and mice embryos, where early expression of Pax2 has been detected in the mesencephalon and the anterior hindbrain, but subsequently Pax2 expression was restricted to the mid-hindbrain region [1, 14, 23]. In human embryos from day 32 to 50 (CS 14–19), Pax2 signal has been detected in the hindbrain, but not in the midbrain or the forebrain [18]. In studies on human 8-week embryos (CS 22), Terzic et al. [19] have shown Pax2 expression to extend from the mesencephalic-rhombencephalic border along the entire rhombencephalon. In particular, strong expression was detected in the outer part of the ventricular zone at the junction of the caudal mesencephalon and rostral rhombencephalon [19]. This region is known as an isthmic organiser centre, which is believed to play an important role in the development of the mesencephalon and the cerebellum [8]. Several experimental animal studies have suggested that initiation and functioning of this organising centre crucially depends on Pax2 [1, 16, 22, 23], and that the regulatory role of Pax2 is an evolutionarily conserved feature for all vertebrates [14]. Furthermore, it has been shown that a mutation of the Pax2 gene in the isthmus leads to the loss of the midbrain and the cerebellum [3, 15, 22]. In our study, Pax2 was also determined in the developing cerebellum and diencephalon. Expression of Pax2 was seen in the ventricular, mantle and marginal layers in the developing cerebellar plate. In mouse embryos, Pax2 has specifically been found to be expressed in a subset of GABAergic cells, and it is proposed that these cells are migratory precursors of the molecular layer interneurons (basket and stellate cells) [7]. The diencephalon, which develops from the median part of the forebrain, is thought to consist of a roof plate and 2 alar (dorsal) plates but to lack floor and basal (ventral) plates [9, 11]. Expression of Pax2 in our study was found mostly in outer regions of the alar plates of the diencephalon. In mouse embryos, Pax2 expression has been determined in diencephalic cells at the border of region between diencephalon and telencephalon, more specifically in populations of cells within the developing septum, hypothalamus and eminentia thalami [4]. Furthermore, in mice, Pax2 has been shown to play an important role in the formation of the optic cup, which develops as an outgrowth of the diencephalon wall and therefore represents a direct extension of the brain tissue [4, 10, 12]. Expression of Pax2 in the developing optic cup has also been detected in human embryos [18, 19]. Thus, it can be suggested that, in human neurogenesis, Pax2 is associated with the establishment of the developing diencephalon as well with the migration and determining cells in the alar plates.

In conclusion, Pax2 protein expression in the developing spinal cord and brain of the human embryos mostly resembles descriptions of the role of Pax2 in the neurogenesis of animals where Pax2 is associated with the establishment of craniocaudal and ventrodorsal boundaries within the developing neural tube and with migration of specific neural cell populations.