Submit an article Author Guidelines Ahead Of Print Reviewers 2019
_04_FM_03_14_Ambrosius

Background: Hyperechogenicity of the substantia nigra (SN) measured by transcranial sonography (TCS) is a characteristic feature observed in patients with Parkinson’s disease (PD). To our knowledge, no SN hyperechogenicity data are available for Polish population. Moreover most of studies come from few centres, which used the one type of ultrasound device. The main aim of the study was to investigate the association between PD and SN hyperechogenicity measured by sonographic machine, not assessed so far.

Materials and methods: In this study cross-sectional study SN hyperechogenicity was evaluated in 102 PD patients and 95 control subjects. Midbrain was visualised by Aloka Prosound 7 ultrasound device. SN area measurement, the relation to the clinical features of PD, inter- and intra-observer reliability were evaluated.

Results: We confirmed that SN echogenicity is significantly increased in PD patients compared to control subjects (p < 0.001). The area under curve for PD patients vs. controls was 0.93. Receiver operating characteristic analysis indicated a cut-offs for SN echogenicity at 0.19 cm2 with accuracy equal to 90%, specificity — 86% and sensitivity — 93.7%. The SN hyperechogenicity was not related to PD clinical findings. Reliability was good if an experienced sonographer performed the SN measurements.

Conclusions: This study shows that the SN abnormality observed by TCS is a specific feature, which can be helpful in the process of PD diagnosing. (Folia Morphol 2014; 73, 3: 267–271)

Parkinson’s disease (PD) is one of the most frequent neurological conditions [13, 23] and some proved that it is the second most common neurodegenerative disorder [15]. Despite the seriousness of the issue the one specific test which might help to put final diagnose has not been established; dopamine transporter single photon emission computed tomography brain imaging (DaT-SPECT) which could be useful in the assessment of parkinsonism with nigrostratial degeneration is expensive and not widely available. In the routine practice the clinical symptoms and criteria still decide about the diagnosis of the disease.

Transcranial brain sonography (TCS) is a relatively new imaging technique that can reveal selected structures of the brain parenchyma. Several years ago changes of the substantia nigra (SN) echogenicity in TCS in PD patients were revealed [2]. Recently many studies have confirmed that SN hyperechogenicity (Fig. 1) is distinguishing feature of PD [4, 25, 32], moreover some of them have shown that this phenomenon is observed in about 90% of PD cases [11, 20]: it seems that this non-invasive and low-cost imaging technique, may be valuable in PD diagnosing process.

Figure 1. Ultrasound image of midbrain with; A. Substantia nigra (SN) in control subject; B. SN in Parkinson’s disease patient (circled by white line).

However we should emphasize that large observations have been done on one type of the ultrasound system (Siemens Sonoline, Germany) and experts in the field claim that every laboratory should establish its own specific reference values for SN echogenicity measurements [6, 29].

To our knowledge, the SN hyperechogenicity visualised by TCS have not been assessed in Polish population.

The aim of our study was to analyse this sonographic phenomenon in the Polish PD population and control subjects using a different (until now not evaluated) ultrasound device (Aloka Prosound, Japan). In this trial the relation of the sonographic findings to the clinical features of PD patients was also evaluated. Additionally inter- and intra-observer reliability was calculated.

In this cross-sectional, case-control study 102 consecutive patients with sporadic type of PD hospitalised between August, 2011 and April, 2013 at the Neurology Department in the university hospital in Poznan (Poland) have been included. The local Ethics Committee of the Poznan University of Medical Sciences approved the protocol of the study.

The PD was diagnosed in the agreement with given criteria, which consist of the presence of 3 (probable PD) of the 4 cardinal features (resting tremor, bradykinesia, rigidity, asymmetric onset), and with significant reaction to conventional therapy (L-dopa or a dopamine agonist) [16]. All patients underwent magnetic resonance imaging in order to exclude symptomatic parkinsonism. None of the PD cases has recognisable cause of secondary parkinsonism or presented atypical symptoms such as pyramidal signs, gaze palsy or cerebellar ataxia.

The control group consisted of 95 patients without any central nervous disease. They were consecutively hospitalised because of musculoskeletal disorders and polyneuropathies.

All subjects underwent comprehensive clinical and TCS examination, which were performed independently by physicians blinded to the results of the other investigation. To assess the disease severity, the PD patients were examined using the Unified Parkinson’s Disease Rating Scale (MDS-UPDRS) and Hoehn and Yahr stage grading [17, 19]. The categorisation of the patients with regard to their motor symptoms was performed using given criteria according to UPDRS III items specific for bradykinesia, rigidity and tremor. Patients were considered to have a tremor-dominant type (TD) if their symptom score achieved 3 points in tremor items, and score 0 or 1 in bradykinesia and rigidity items. The subjects were classified to have an akinetic-rigid type (AR) if their symptom score was 3 points in 3 bradykinesia and rigidity items, and a score of 0 or 1 in tremor items. The mixed type has been chosen if patients had another combination of scores specific for bradykinesia, rigidity, and tremor [22].

TCS examination was performed as described in experts’ recommendations and review article [1, 30]. Briefly, an ultrasound device with a phased array 2.5–3.5 MHz transducer (Aloka Prosound, Japan), the penetration depth 14–16 cm, automatic adjusted gain compensation and brightness and examined scanning plane through the temporal acoustic bone window have been used. On the optimal images of the butterfly-shaped hypoechogenic midbrain surrounded by hyperechogenic basal cisterns we manually encircled the echogenic area corresponding to the SN. An expert sonographer examined all subjects and he performed measurements twice offline. Additionally, experienced sonographer but with only basic skills in the TCS repeated measurements in randomly selected 30 PD patients and 30 control subjects. Thus intra-rater and inter-rater reliability could be estimated.

Descriptive statistics are given as mean and standard deviation (SD). Normal distribution of data was assessed by Shapiro-Wilk test. In the statistical analysis, nonparametric test (Mann-Whitney U test), parametric unpaired t test, Fisher’s exact test have been applied. Receiver operating characteristics (ROC) were performed to assess the accuracy of TCS for differentiation of PD patients and control subjects.

Seven (7%) subjects were excluded from the study PD group due to an insufficient temporal bone window. Final statistical analysis included 95 PD patients and 95 controls. There was no significant difference in sex and age between the groups. 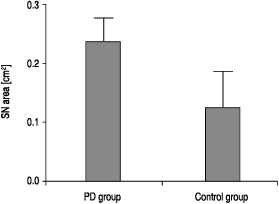 ROC of SN echogenicity showed an area under the curve of 0.93 (95% confidence interval [CI], 0.89–0.96) for differentiation of PD patients and control subjects. Analysis of ROC indicated a cut-off for SN echogenicity at 0.19 cm2 (Fig. 3). 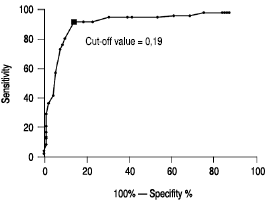 Table 1 shows clinical data after cut-off value usage to separate PD subjects with SN ≤ 0.19 cm2 and SN > 0.19 cm2. There was no difference between subgroups in age, sex, disease duration, as well as MDS-USRS and Hoehn and Yahr stages of disease.

There was no statistically significant difference in the SN echogenic area between the TD, AR, and mixed type PD patients.

Consistent with number of previous reports from independent centres [14, 20, 21, 25, 28] our study confirmed a morphological abnormality of the SN visualised by TCS in the majority of PD patients. It is the first trial that investigated the size of SN hyperechogenic area in a large group of Polish population. We defined SN > 0.19 cm2 as an abnormal extension of hyperechogenicity with the sensitivity is 86.3%, specificity 94%, with positive predictive value of 85.7%, and negative predictive value of 82.8%.

This study showed that SN hyperechogenicity in PD patients was not correlated with age, disease duration, Hoehn and Yahr staging or the unified PD rating scale motor symptoms, disease severity, that harmonised with most of the previous reports [25, 31]. We also confirmed earlier findings that the SN hyperechogenicity is not different among the motor subcategories of PD [11]. Therefore, all these data may suggest that structural changes revealed in TCS do not determine severity of PD symptoms.

We have also noticed that 10% of control subject had this ultrasound phenomenon, which lies within formerly reported 8–10% range.

Recent results of several longitudinal studies have shown that SN hyperechogenicty does not differ in size during the course of PD [3, 8]. Finally the prospective study demonstrated a highly increased risk for PD in healthy elderly individuals with SN hyperechogenicity presence [10].

Hence, most of experts in this field treat this TCS phenomenon as a marker of PD, which can be helpful not only in early diagnosis but also in the predisposition assessment of this disorder [6]. There are several stu-dies, which revealed the extent of SN hyperechogenicity in asymptomatic carriers of mutations of well-known PD-causing genes, as LRRK2 and PARK2 [12, 18].

However, there are 2 crucial points of criticism regarding SN area evaluation: the first one is a dependence on the examiner’s experience. In our study intra-rater reliability in experienced neurosonographer was relatively good but inter-observer reliability (qualified vs. inexperienced sonographer in TCS) was moderate. This is consistent with previous reports that SN hyperechogenicity measurement reproducibility is high when performed by 1 experienced investigator [26, 27].

The second issue is the bias of the examiner who can notice evident extrapyramidal signs in patients with severe PD. In 1 recent interesting study sono-graphers were completely blinded: the examination room was completely darkened and the patients were veiled. Still the positive predictive value for PD was very high, i.e. 85.7% [24].

The basis of SN hyperechogenecity phenomenon is not clear enough. TCS of post-mortem brains and animal studies indicate that this abnormality may be related to iron deposition with formation of free radicals [7, 9].

There is also a hypothesis that it could be the result of microglial activation [5]. Further studies in this area are needed.

There is one important limitation of our work: it was carried on well-defined PD patients; we did not include any subjects with atypical Parkinsonian syndrome. However, the aim of the study was to estimate the presence of SN hyperechogenicity in clear condition in homogenous population of Polish patients. The role of SN abnormalities assessment in differential diagnostics might be analysed in our following studies.

In conclusion, SN hyperechogenicity as measured by TCS is a distinguishing feature related to PD that can improve the routine practice of movement disorders specialists.