Submit an article Author Guidelines Ahead Of Print Reviewers 2019
_12_FM_03_14_Skorek

The orbit is a complex, conical structure formed by bones, with the base opening towards the front and the apex towards the back of the head. The orbit contains, above all, the eyeball, the optic nerve and the eyeball muscles. All these structures are tightly bound by ligaments, supporting elements made of connective tissue, and by adipose tissue. The orbit may also be the site of primary or secondary (usually originating from the adjacent paranasal sinuses) inflammatory or neoplastic processes. Another possible issue is evaluating the extent to which the bone elements have been preserved after a trauma and the presence foreign bodies in the orbit. When choosing the appropriate method of surgical treatment, both the location of the pathological process and the important anatomical structures should be taken into consideration. Such treatment is often performed by teams, such as the following: ophthalmologist, otolaryngologist, and neurosurgeon. It also requires precise knowledge of the orbital anatomy and its possible variability. The key term in the orbital surgery is the “safe space”, namely the distance from the outer bone margin to the optic canal.

The purpose of this paper is to determine the orbital dimensions, angles between the orbital walls and distances between the outer margin of the orbit and its apex (the opening of the optic canal) basing on the images obtained in computed tomography (CT) scans performed in three planes: horizontal, sagittal and frontal.

Evaluated were CT images of the head (in the orbital area) of patients with no previous trauma in this area, chronic diseases of the bones and sinuses or surgeries of the neurocranium and splanchnocranium. The study subjects were patients who appeared at the Clinical Emergency Department of the Medical University of Gdansk (head: Prof. A. Basiński, MD PhD) for neurological reasons (headaches, dizziness, status post an epileptic seizure, suspected circulatory disorders within the central nervous system). The group included 100 patients (50 women and 50 men) aged between 18 and 93 years (60.3 years in average). All patients agreed to participate in the study. The CT scans were performed in 3 planes: horizontal, sagittal and frontal, in 0.6 mm layers. All the obtained values were provided in millimetres and entered into the Microsoft Office Excel 2007 spread sheet. Each examination started with adjusting the head position, so that the distance between the nasal ridge (the nasion) and the outermost point of the orbit was equal on both sides (with a margin of 0.5 mm, namely less than 0.6% difference between the sides). If the difference was more than 0.5 mm (due to difficulties in adjusting the position of the head), the results were discarded. 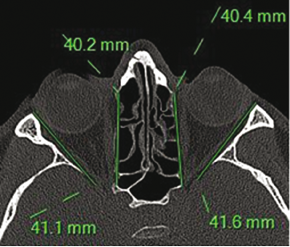 If the difference in distances between the sides (in 1 patient) was 0.5 mm or more (which was 1.13% and 1.15% of the results obtained on both sides, respectively), the results were discarded and no further measurements were made. 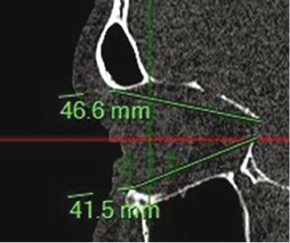 Basing on the CT images also the angles were evaluated between the lateral and medial walls and superior and inferior walls of the orbit. The evaluation was made on the horizontal and sagittal planes respectively, with the middle of the optic canal as the vertex of the angle and the rays of the angle resting on the bony margins of the orbit (Fig. 3).

Figure 3. Method of measuring the angles between the medial and lateral walls (A) as well as inferior and superior (B) walls.

Figure 4. The angle in the inferior wall (A) and the angle between the Frankfurt plane (red line) and the inferior margin of the orbit (B).

Descriptive statistics, including mean value, standard deviation (SD), and range were included. The statistical testing was based on the distribution of continuous variables that was verified by the Kolmogorov-Smirnov test. Student’s t-test or non-parametric Mann-Whitney U test was applied for relevant comparison. Software Statistica v.10.0 (StatSoft, Inc.) was used for statistical analysis, with the significance level less than 0.05 in calculations.

Measurements of the orbital size

The average angle between the medial and la-teral walls was 50.2° — men and 49.6° — women on the right and 50.4° — men and 49.7° — women on the left side. No statistically significant side to side differences were found in measurement results. The difference between the angle size in men and women was statistically significant. The average angle was 50.0° (SD 3.82–3.95o).

Table 2. Values of the orbital angles [°]

As a portrayal of our analysis, a patient with an orbital tumour was presented herein. A meticulous preoperative knowledge of orbital measurements and angles is necessary in the contemporary microsurgery of these lesions (Fig. 5).

In order to determine orbital size basing on the CT imaging, fixed, repetitive and easily recognisable points need to be established, on which the measurements will depend. Such points need not be identical with the landmarks, which are used for better intraoperative and topodiagnostic orientation. The points used for measurements, however, are used to represent the size of the orbit (distance from the base to the apex, determining the angles between the walls or particular elements of the walls, etc.) [24].

The starting point for measurements in the medial wall was, in this study, the verge of the posterior lacrimal crest, and the final point was the medial optic canal border. Similar final points, to which the distance from the starting point was measured, were provided by Ji et al. [12], who used the frontomaxillary suture as the starting point (easy to find on a dry skull and intraoperatively, but difficult to establish in CT imaging). Other authors provided as a measurement point (e.g. to determine the distance to the ethmoidal foramina) the anterior or posterior lacrimal crest [5, 6, 11, 14]. The average result of the present measurements was 43.02 mm (no statistically significant side to side and gender differences), which is similar to the results obtained by other authors (43.77 mm and 42.0 mm) [1, 23].

Within the lateral wall, the distance was measured between the bony point on the level of the lateral rectus muscle attachment to the orbital globe and the lateral portion of the optic canal border. Many authors recommend the frontozygomatic suture as the starting point of measurement. This point is a surgical landmark, but is difficult to locate in CT images [6, 10, 14, 17, 23]. The starting point in this study is analogous to the point proposed by Ji et al. [12] — it is an external bony point in the intersection between the horizontal line that divides the orbit in two equal parts (upper and lower) and the lateral bony margin. This point is equivalent to the Whitnall’s tubercle — approximately 1 cm inferior to the frontozygomatic suture and approximately 4–5 mm behind the lateral orbital rim, where attached are the lateral canthal tendon, the lateral rectus check ligament, lateral horn of the levator aponeurosis, suspensory ligament of the lower lid (Lockwood’s ligament), the lacrimal gland fascia and the orbital septum [5, 16]. Lee et al. [15] used for their measurements such horizontal CT images, in which the length of the lateral rectus muscle was largest. In the present study this length was 43.78 mm in average (no statistically significant side to side and gender differences). This result was within the range obtained in the measurements of the distance from the frontozygomatic suture to the optic canal: 43.0 mm ÷ 47.1 mm [17, 22].

The starting point in the measurements within the superior wall was usually the supraorbital foramen [12, 14, 17, 23]. The distances to this foramen from the optic canal were within the range from 40 mm to 48.65 mm. In the measurements performed in the present study, the starting point was the superior orbital margin in the sagittal plane and the final point was the upper border of the optic canal. The result was 45.15 mm (no statistically significant side to side and gender differences). In other studies, the starting point for measurements in the lower wall was the infraorbital foramen or the bony margin of the orbit above the infraorbital foramen. The results were 40 ÷ 54 mm, 50.3 mm in average, and 45.5 mm, respectively [11, 14, 17, 21, 24]. In the present study, the bony margin of the orbit was used as the starting point and the distance to the optic canal was 42.96 mm in average (no statistically significant side to side and gender differences). Both these distances are within the standard error, and the differences between the results may be caused by differences in the applied measurement methods and the subjects who underwent the measurement.

For surgical exploration of the orbit, the distances between the bony margin to the unsafe zone (superior and inferior orbital fissure, ethmoidal vessels) and the critical zone (optic canal) need to be determined [3, 13, 23]. Based on the analysis of the obtained results it was established that the safe space (distance between the bony margin of the orbit and the optic canal) in each of the orbital wall is approximately 40 mm. Other authors obtained similar results [20, 22].

The size of the orbit was evaluated based on the angles between the lateral and medial walls and superior and inferior walls of the orbit. For the evaluation of the inferior wall, the angle was used between this wall and the Frankfurt plane — this angle in the study group was 19.7°, and between the anterior and posterior segment of the orbital floor — 130.8° (no statistically significant side to side and gender differences). According to Nagasao et al. [19], the angle between the orbital floor and the Frankfurt plane is larger and amounts to 30o. That study was performed on Japanese subjects [19]. The angle between the medial and lateral wall of the orbit in the present study was 50.0° (no statistically significant side to side differences were observed, but the angle size was statistically significant greater in male gender), while other authors obtained a smaller angle of 45o [22]. However, Dortzbach [7] emphasised that there is a large variety of angles between the orbital walls, depending on gender and ethnicity. The angles between the orbital walls (orbital geometry) determine the orbital volume [22]. Al-Sukhun et al. [4] stated that the larger the orbital volume, the less resistant the orbit is to a trauma — a 1 mm difference in the wall spacing reduces the resistance by approximately 50%. That study was performed on a statistical computer model.