Submit an article Author Guidelines Ahead Of Print Reviewers 2019
_05_FM_02_14_Zawilinski

The venous system of the human foetal spinal cord has not been paid much attention to. In available literature few papers have been found on this subject [1, 2, 4, 5, 12, 13] and scarce works in the form of albums or illustrations [14].

Although many authors investigating the arterial system of the spinal cord touched the subject of the veins, they were treated in the marginal way. The information was usually restricted to the statements that the veins run together with the arteries. None of the above-mentioned papers has been concerned with the venous system of the human foetal spinal cord.

Recently there have been several publications dealing with this problem, but their authors focused mainly on the venous system of the animal spinal cord [8].

In such circumstances, present investigations due to the use of scanning microscope enabling almost unfailingly to determine the type of blood vessel, cast more light on the problem of the veins of the human foetal spinal cord.

The aim of this work was the observation of the venous system of the human spinal cord during the foetal development, using the technique of vascular corrosion casts and scanning electron microscopy [9, 10], which gives high resolution pictures of the vascular network. Only few publications have been concerned with the arterial system of the spinal cord during the prenatal development. For that reason the authors of this paper have undertaken the investigation.

The investigation of the vascular system of grey and white matter of the spinal cord was carried out on 16 human foetal cadavers ranging in crown-rump length 150–235 mm, which was about 17–23 weeks from the conception. After the foetal vascular system was rinsed with heparinised physiological saline and fixed with fixing agent (0.66% paraformaldehyde/0.08% glutarate aldehyde), it was filled through the ascending aorta with the synthetic resin Mercox CL-2r/2B with an additive of methyl metacrylate monomer. After polymerisation of the resin at 55°C, the spinal columns with spinal cords and meninges were isolated. Then demineralisation of the soft tissues was carried out in 5% trichloro-acetic acid followed by maceration in 10–15% KOH alternating with distilled water. The obtained specimens were then rinsed thoroughly in distilled water, freeze-dried and coated with gold, and finally analysed under the scanning electron microscope JEOL JSM 35 CF.

The venous system of the foetal spinal cord exhibits great variability as to the number, course and localisation of the vessels. It contains numerous anastomoses with internal spinal venous plexuses, which include anterior and posterior radicular veins. Large arteries running on the surface of the spinal cord are accompanied by homoname veins. In case of large vascular trunks in the foetus, veins had usually larger diameter than the arteries (Figs. 1, 2). 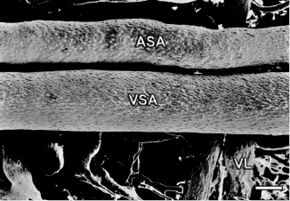 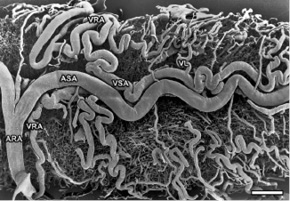 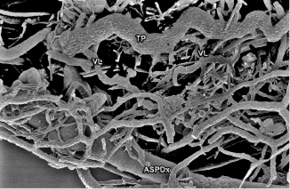 The veins of the spinal cord do not contain the valves, what is confirmed by the increase in the pressure of the cerebro-spinal fluid in the Valsalve’s or Stookey’s trials. However, some authors have described the presence of the venous valves, or rather a specific mechanism of valves including the formation of the internal fold in the site of anastomosis of the vessels [6]. These folds can occasionally be the cause of poor filling of the spinal cord veins in case of their injecting with filling mass. In the investigated foetal material the valves were not observed, however, in some foetuses difficulties were noted in the perfusion of the injected mass into the lumen of the vessels even at low density of the injected mass as in case of synthetic resins.

In the venous system of the investigated foetuses 2 categories of veins were distinguished: 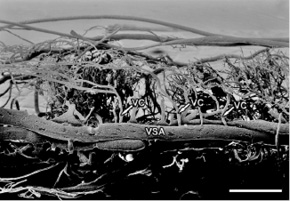 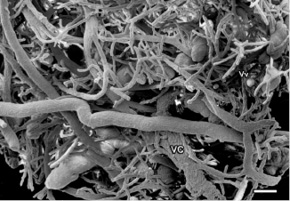 The anterior spinal cord vein ran accompanying laterally or ventrally the homoname artery. This is consistent with the observations on the adults [1–7, 11–13]. In the foetus, its diameter always exceeded by about 20–120 μm the diameter of the artery. It received the lateral and medial blood supply and then via the anastomoses with anterior radicular veins the blood was carried to the internal spinal venous plexuses. 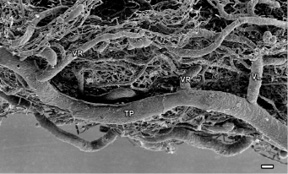 Karmański et al. [8] in the studies on animal samples reported the greatest diameter in the sacral region. They described the presence of a single venous trunk on the ventral side of the spinal cord similar to that on the dorsal side. In the analysed material, no such trunk was found on the ventral side. The observed discrepancies might result from the differences between the species or from the assessment of the venous system at various stages of its development. The blood was carried from the external veins of the foetal spinal cord to the internal venous plexuses of the spinal cord. This plexus joining the outflow of the blood from the spinal cord and walls of the spinal canal exhibits better development on the ventral side in the adult. On the dorsal side, this plexus shows considerable variability as to the shape and levels of arrangement of the anastomoses [6]. The blood flow to the internal spinal cord plexuses is via the anterior and posterior radicular veins of various number and localisation. From the anterior plexus the blood flows to the baso-vertebral veins and partially, similarly as from the dorsal plexus, the blood outflows via superior and inferior intervertebral veins, situated in the area of intervertebral openings, to the external spinal venous plexuses. On both sides of the anterior surface of the dura mater there are longitudinal trunks, the so-called medial epidural vein and lateral epidural vein whose numerous anastomoses form anterior internal spinal plexus [14]. Next the outflow of the blood occurs through the system of azygos veins, in the sacral part to the internal iliac veins and their branches and in the cervical part to the spinal veins, internal cervical veins and the veins accompanying the arteries branching off the external cervical arteries. In the analysed samples, the internal spinal plexuses were well formed in all age groups. However, the epidural veins of longitudinal course, which were described in the adult, were not found in the investigated material.