Submit an article Author Guidelines Ahead Of Print Reviewers 2020
16_FM_01_14_Cullu

Inferior vena cava (IVC) hypoplasia is a rare condition. Venous blood flow is usually provided through collaterals in the azygos or hemiazygos venous systems. However, portosystemic shunts with intrahepatic venous collateral are extremely rare. The case is presented here of a large shunt between the right hepatic vein, accessory inferior hepatic vein, and inferior vena cava in a 37-year-old female patient with IVC hypoplasia. (Folia Morphol 2014; 73, 1: 99–101)

Inferior vena cava (IVC) hypoplasia is an uncommon condition, and may be asymptomatic. Venous blood flow is usually provided through collaterals in the azygos or hemiazygos venous systems. Portosystemic shunts with intrahepatic venous collateral are extremely rare. The case is presented here of a large shunt between the right hepatic vein, accessory inferior hepatic vein, and vena cava inferior in a 37-year-old female patient with IVC hypoplasia.

A 37-year-old female presented at the internal medicine department for a check-up examination without any specific complaint. Clinical examination and laboratory tests were normal. In the ultrasonography (USG) examination, a large hepatic vein was detected. An abnormal vascular structure of 15 mm diameter in the right lobe of the liver was observed on the abdominal USG. Colour and pulse Doppler USG demonstrated a hepatopetal flow within the abnormal vascular structure. The portal venous system was evident and in a normal configuration. The retrohepatic IVC was not identified. The upper end of the IVC finished in the retro hepatic region where it entered through the liver and made large anastomotic channels with the right hepatic vein in the peripheral regions of the right lobe of the liver (Fig. 1). 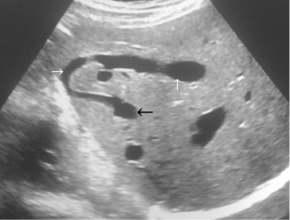 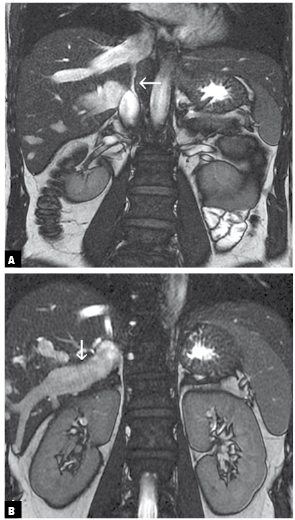 The blood in the distal of hypoplastic segment of the IVC drained to the proximal segment through the shunts between the accessory inferior hepatic vein and the right hepatic vein (Fig. 3). 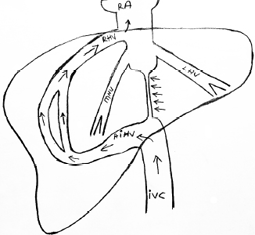 The liver function tests and other laboratory test results were normal. This patient, who has no clinical findings, has been under observation for years without any treatment.

The embryological development of the IVC is quite a complicated process. The IVC develops from sequentially anastomosis and regression of 3 paired venous channels [7]. The sixth and seventh weeks of gestation are the most critical period for this and until the eighth week, the differentiation of cava at cranial levels continues almost as in adulthood. Hypoplasia or agenesis of retrohepatic vena cava segment and drainage over hepatic veins are the results of abnormal regression or organisation in the early gestational period. Most researchers believe that the vast majority of cases of IVC interruption are due to congenital anomalies [3, 8], either a lack of development of venous channels or lack of persistence of anastomotic channels.

IVC anomalies with agenetic segment are very rare. Alternative routes of venous return in IVC interruption are the lumbar vertebral pathways, the anterior abdominal wall veins and the transumblical portocaval way [4, 5]. The lumbar vertebral pathways can be divided into central and intermediate channels. The central channels (azygos vein etc.) are the most frequent and the first opened pathways [4]. Hemiazygos continuation is reported less frequently than azygos continuation [1]. This drainage to the portal system and hepatic veins is very rarely reported. These cases are generally asymptomatic, although in some cases, symptoms can appear, such as right upper quadrant pain. Our patient was asymptomatic. colour Doppler examinations added to USG demonstrated a hepatopetal flow and warning about possible IVC pathology. MRI gives better visualisation of both the hypoplastic area and the shunt and afferent and efferent vessels. In the current case, the blood in the distal hypoplastic segment of the IVC drained to the proximal segment through the shunts between the accessory inferior hepatic vein and the right hepatic vein. Magnetic resonance and multidetector computed tomography venography imaging could be beneficial for the demonstration of shunt and delineation of collateral circulation [2, 6].

In conclusion, MRI examination is needed to demonstrate in detail congenital anomalies of IVC and establish proper diagnosis.