Gross morphometry of the heart of the Common marmoset

The Callithrix jacchus is a Brazilian endemic species that has been widely used as an experimental model in biomedical research. Anatomical data are necessary to support experimental studies with this species. Eleven hearts of C. jacchus from the German Primate Centre (DPZ) have been studied in order to characterize their gross morphometry and compare them with other animal models and human. Biometric data were also obtained. The mean values for morphometry of the hearts did not show any significant difference between male and female. The relative heart weight was similar to human, bovine and equine species. Considering those aspects, the C. jacchus could be used as non-human primate experimental model for biomedical studies on heart. (Folia Morphol 2014; 73, 1: 37–41)

The Common marmoset (Callithrix jacchus) is a Neotropical primate from Brazilian Cerrado region [21]. Although it is endemic in Brazilian Northeast, the inadvertent introduction into other regions have provided evidence of high adaptability to different habitats [3, 17, 18, 20].

This adaptable characteristic has led the species to captive life. In comparison to other non-human primate experimental models, the C. jacchus has shown advantages such as lower breeding costs, easier handling, biosafety and physiological similarities [1, 14, 15]. This way, the interest in marmoset data has developed significantly lately [22], as shown by scientific citations increasing from less than 100 in 1960’s to over 2700 in 1990’s [1]. Actually, over than 2900 and 5200 scientific publications are found in PubMed and Scopus index, respectively, when searching “marmoset” as key word.

Regarding heart morphology, we found little information in literature [9, 26]. However, diseases like myocardial fibrosis, chronic myocarditis and ventricle dilatation have been reported previously for captive individuals of C. jacchus [4, 7, 16, 24]. To understand these and other heart pathologies, i.e., related to toxicological studies [5], it is critical to establish normal characteristics and morphological data. In addition, species database has great value to veterinary medical care [12] and biodiversity.

Considering the scant information of C. jacchus heart morphology, we have studied the gross mor-phometry to provide basic information for further anatomical, physiological and physiopathological studies. We also took biometric data to characterize the studied specimens.

All samples were obtained at DPZ from animals which were euthanised for other experiments under DPZ standard procedures in OP theatre (German permission Az.: 509.42502/08-01.03) and transferred under register number 0100/06 to Universidade de Sao Paulo (USP) where the protocols were approved and certified under register number 1894/2010 by the Bioethic Commission of the School of Veterinary Medicine and Animal Science of USP in agreement to ethical principles in animal research.

After euthanasia, specimens were weighed and body measures were taken. The thoracic perimeter was taken in thorax caudal third.

Thorax was opened by section of the costochondral joints exposing the heart which was dissected preserving the great vessels in standard length close to heart base to not interfere the weight measurement of the organ.

The heart gross morphometry (ventricle high, lateral width, dorsal-ventral width, perimeter and ventricles thickness) was taken using Mitutoyo® CD-8” CX-B digital calliper. The ventricle height was established from the coronary sulcus to apex in the atrial face. Widths were taken in largest possible measure considering both atrial and auricular faces. The perimeter measurement was done based on coronary sulcus. Right and left ventricle thickness was taken in the middle third of each ventricle wall after dissection.

For statistical analyses, 3 groups were used: males, females and both. Average, median and standard deviation were obtained for each group. Statistical comparisons between male and female group were practiced using T-Student considering α = 5% in agreement to Rodrigues [19].

The heart occupied the major part of the middle mediastinum. The shape was similar to an irregular cone and the base was connected to great vessels while the rest of the structures were free into the pericardium (Fig. 1). 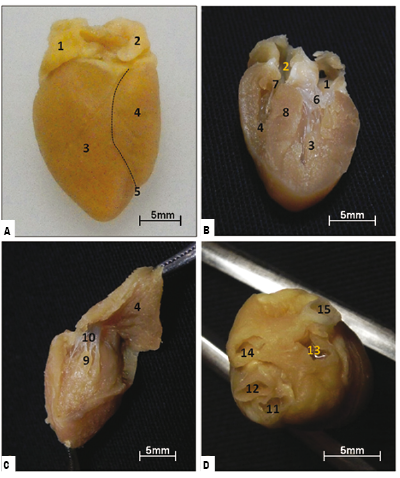 Heart measurements and biometric data are presented in Table 1.

Table 1. Biometric and morphometric values of 11 studied specimens (grouped or not) of Callithrix jacchus

Our results presented no biometric differences between males and females in T-Student test. This is in agreement to reference [22] that indicates the marmosets are sexually monomorphic. In comparison to Valle [25], the thoracic perimeter of the males in our study was wider. This is coherent to body proportion once the specimens from National Primate Centre in Brazil (CENP) were lighter and smaller than ours.

Regarding to body weight, our results did not meet significant differences between males and females. When checking the references, free living specimens seem to be lighter than captive ones [2, 3, 9, 25]. It probably occurs because free living animals have different diet and higher activity level due to territory defense, searching food and running away from predators. Considering the captive animals, our results for absolute weight values are in agreement to Clarke [6]. However, Wadsworth et al. [26], and Araújo et al. [2] have found much lighter specimens. We believe that the differences between the previous studies are not related only to genetic components but especially to caloric diets. This means that probably our specimens were overweighed or had obesity tendency.

Other notable finding in our data was the positive relation between the weight of the heart and the weight of the respective body, called relative weight of heart. This positive relation was also found in other studies [9, 26]. However, our absolute values were in agreement only to 350 g adult specimens, not young, studied by Wadsworth et al. [26]. It can be explained considering animal age, once the development of each organ is different during the specimen growing. In addition, different equipment and weighting techniques could interfere in absolute values. Around differences on relative weight of heart between males and females, there was no statistical significance in present data. This corroborates the use of non-specific gender for cardiovascular experimental studies because the similarity of the charge and work of the heart. In comparison to the domestic animals, the C. jacchus is more useful as model for human studies because only bovines and equines have similar relative weight of the heart — charge of work — but they present different other physiological aspects [10, 23].

Our findings also presented similar gross anatomy between the heart of C. jacchus and the heart of human and domestic carnivorous [8, 10, 11, 23].

In concern to morphometry of the heart, we did not find significant differences between males and females. This way, both serve well to evaluate morphometric changes promoted in heart diseases or experiments. No reference was found to further discussion of our results.

Although C. jacchus has been used extensively as experimental model to human in many different fields of biomedical research, more cardiovascular system information is necessary. Our study provided heart gross morphometric parameters regarding captive specimens and it indicates the species has great potential for using as model for cardiovascular studies, independently of the gender. Finally, it is important to understand the histological and physiological aspects of both free living and captive specimens because their biometric and anatomical differences.

We thank the Deutsches Primatenzentrum (DPZ) in Germany for the samples, the Coordenação de Aperfeiçoamento de Pessoal de Nível Superior (CAPES) for the financial aid, Professor Dr Timothy Moulton from University of State of Rio de Janeiro for revising this article and Dr Anamaria Szrajbman Vaz da Silva from Federal University of the State of Rio de Janeiro for statistical support.