Anatomical factors causing oedema of the lower limb during pregnancy

Background: The objective of this study was to investigate the morphology of the common iliac artery and vein (CIA&V) comparing right and left sides in females versus males. Pregnant women favour lying on one side at rest and during sleep. The reason for this may be due to the morphology and orientation between the CIA&V. Virtually all women during their pregnancy suffer from lower limb swelling. This study provides an anatomical explanation for the propensity to lie consistently on one side, for lower limb swelling, and offers prevention measures.

Results: The literature search revealed very limited studies on the morphology and orientation of the right and left CIA&V with no studies relating this orientation to lower limb oedema or sleeping positions during pregnancy. Cadaver dissection revealed a relatively direct anterior to posterior orientation left CIA&V and an oblique lateral to medial right CIA&V.

Conclusions: This study suggests an explanation of why women lie on their left side when resting and sleeping during the third trimester due to the clinically relevant anatomy between the CIA&V. (Folia Morphol 2013; 72, 1: 67–71)

The common iliac veins are recognised as the joining of the external and internal iliac veins as they ascend within the pelvis towards the abdomen. Their attitude transfers right of the midline and forms the inferior vena cava. The common iliac arteries descend from the aorta, which classically lies left of the midline within the abdomen, into the pelvis bifurcating into external and internal branches.

The common iliacs have become involved with vascular surgery and are capable of transmitting a guide wire to allow arteriograms of the aorta and cardiac vessels as a recipient of the Seldinger technique [27]. Bypass vascular surgery and clots can occur involving both common iliac arteries and veins. There has also been a great deal of interest in the orientation of the right common Iliac artery as it crosses over the left common iliac vein because of the hypothesised relationship between iliac vein compression syndrome (IVCS) and deep venous thrombosis (DVT) in the lower extremities [2–4, 10, 11, 18, 21, 24, 28].

Pregnancy, in particular during the third trimester, causes swelling of the distal lower limbs. This can lead to pain from excessive swelling of the feet, problems with footwear, and an antalgic gait. Observations reveal a left and right side difference regarding the appearance and severity of ankle swelling. Studies of IVCS and DVT have also revealed an increased percentage of left lower limb DVT in pregnant women [4, 20]. Furthermore, the majority of pregnant women in their third trimester favour lying on one side of their body more than the other. A documented cause for a left-sided sleeping pattern is IVCS and supine hypotensive syndrome during pregnancy. Women with this syndrome prefer to lie on their left side, which transfers the pressure of the foetus from the collapsible right-sided IVC to the much more compression resistant left-sided aorta [7, 8, 15–17]. Interestingly, pregnant women who do not suffer from IVCS prefer sleeping on their left side.

The objective of this study was to analyse the anatomical orientation of the common iliac artery and vein (CIA&V) and see if the morphology was different from one side to the other, which could explain swelling of the distal extremity of the lower limb and sleeping behaviour without IVC compression. 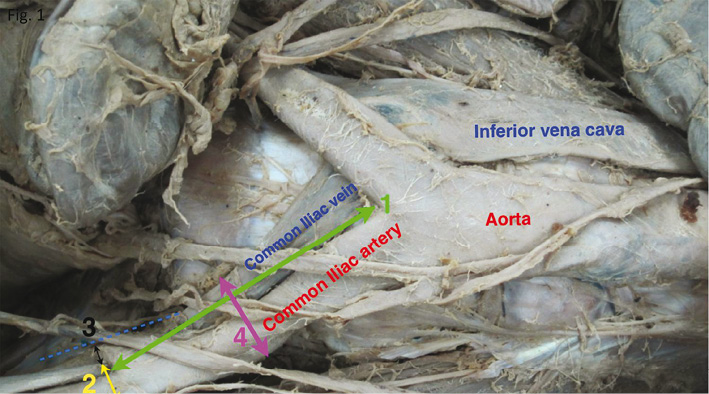 A literature search of anatomical and specialty texts/atlases revealed relatively few (32%) adequate pictorial representations of the orientation of the CIA&V to each other [1, 5, 6, 9, 12–14, 19, 22, 23, 25, 26, 29–33, 35, 36], and only one anatomical text (5%), the 40th edition of Gray’s anatomy [32], accurately describes this orientation. A literature search of journal articles revealed multiple studies relating to the CIA&V; however, the focus of the majority of these articles was IVCS and DVT, not the distal morphology of the CIA&V. Measurements of the CIA&V in these articles included the length prior to bifurcation [34], distance from aortic bifurcation to the sacral promontory [10, 34], distance between the right CIA (RCIA) and the left CIV (LCIV) [10, 34], and the width of the uncovered LCIV [10]. A literature search of sleeping patterns and lower limb oedema during pregnancy revealed that IVCS causes pregnant women to sleep on their left side because a supine sleeping position can completely occlude the IVC forcing venous return via alternative collateral channels, usually the lumbar veins [8, 17]. There were no studies relating lower limb oedema and a left-sided sleeping pattern to the orientation of the LCIA&V and RCIA&V; however, one study did note that the LCIV was more markedly affected by compression of the foetus than the RCIV [17].

The cause of the swelling of the distal lower limb extremities during the third trimester of pregnancy is multifactorial, including inferior vena caval syndrome, supine hypotensive syndrome, posture, gait, etc. [4, 7, 8, 15–17, 20, 24]. The authors would like to add to this by suggesting the orientation of the LCIA&V is a significant factor in pregnant women causing lower limb swelling. The authors believe the majority of pregnant women will notice right ankle/foot swelling initially, then bilateral as pregnancy progresses.

The majority of the veins within the body are anterior or superficial while arteries are deep or posterior; however, in this particular instance, the orientation is reversed. Since arteries maintain their integrity and veins are collapsible, a decreased venous return can be explained by the anteriorly oriented arteries, which compress the posteriorly positioned veins. It has been hypothesised by the authors that a significant factor causing the swelling may be due to the orientation of the CIA&V to each other. The dissections revealed such a pattern: the RCIA&V lie in an anterior/posterior attitude to each other and LCIA&V revealed a common pattern of a side-by-side attitude (Fig. 3). 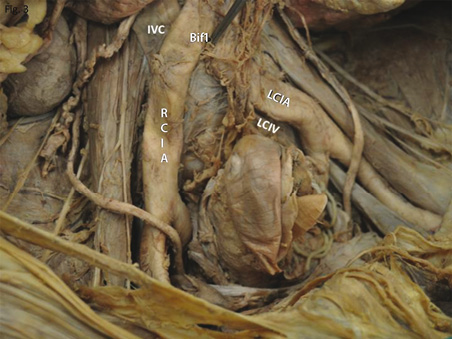 Some studies have mentioned that the LCIV is medial to the RCIV and one study measured the width of the uncovered LCIV; however, no known studies provided specific measurements of the RCIA&V and LCIA&V to each other inferior to the aortic bifurcation. The measurements conducted in this study revealed that the LCIA&V has a consistently greater width than the RCIA&V due to the medial/lateral orientation of the LCIA&V compared to the anterior/posterior orientation of the RCIA&V. During the third trimester, a fetus can apply pressure anterior to (on top of) the RCIA, which compresses the RCIV directly beneath it (Figs. 4, 5). 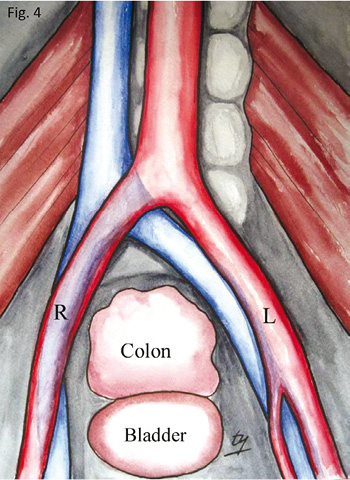 Figure 4. Illustration displaying the accurate morphology and orientation of the common iliac artery and vein. 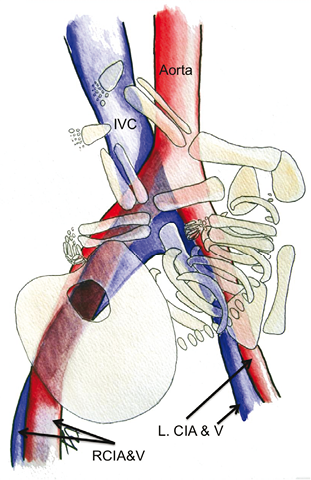 Figure 5. Illustration displaying the pressure place on the right (RCIA&V) and left (LCIA&V) common iliac artery and vein by a foetus during the third trimester; IVC — inferior vena cava.

Though IVCS and supine hypotensive syndrome are well-documented causes of oedema during pregnancy, particularly during the third trimester, this does not explain the unpublished data from the authors, which revealed that the symptoms and signs of the swelling of the distal lower extremities during the third trimester are generally first noted on the right side. This may be related to the orientation of the RCIA&V compared to the LCIA&V and may help explain why many third trimester women prefer to lie on their left side, which decreases the swelling from the distal lower extremities. Further, according to Macklon et al. [20], a left lateral lying position increases the flow velocity in the LCIV providing anatomical and aetiological proof of the preferred left lying position for women during pregnancy. To support this and the author’s hypothesis regarding the orientation of the LCIA&V with its link to lower limb swelling and sleep positions, they will be collaborating with other institutions to study right versus left sided femoral venous pressure. If the left femoral vein has a lower total pressure than the right femoral vein, inferior vena cava compression could be ruled out because it suggests the cause is unilateral (most likely due to the orientation of the LCIA&V versus the RCIA&V).

Clinically, those health care providers who assist or treat pregnant women can provide an explanation of why the swelling may occur and how to minimise the swelling (by lying and sleeping on one’s left side). Clinicians should detail how lying on one’s left side can help to alleviate IVCS and diminish the amount of LCIV compression, both of which are factors in lower limb swelling. The ability of a clinician to anatomically explain why a woman may acquire swelling of the distal lower extremities may alleviate anxiety (a better-informed patient is a less anxious patient).

This study suggests a frequent pattern between the RCIA&V and LCIA&V that may add to the aetiolo-gy of swollen ankles during the third trimester of pregnancy as well as provide an explanation for left-sided sleeping behaviour during this time.

The authors would like to thank Tiffany Yee for the anatomical illustrations and Amy Swofford for her assistance in the lab with data collection. We would also like to thank B. Davidson for manuscript support and all the donor cadavers whose gift ena-bled this study to be conducted. Special thanks to The McDaniel Clinical Anatomy Research Lab.