Atrial fibrillation (AF) is one of the most common arrhythmia and one of the major risk factors for stroke, associated with approximately 5-fold increased stroke incidence [1, 2]. It has been estimated that 20–30% strokes are due to cardioembolism, mostly caused by AF. The prevalence of AF increases with age, and AF becomes an independent risk factor for stroke in subjects above 80 years of age especially [1, 3]. Risk factors for stroke in patients with AF are included in the CHA2DS2VASc risk score: age above 65 years, female gender, hypertension, heart failure, diabetes, vascular disease, and a previous thromboembolic event [4]. Stroke related to AF is characterized by worse clinical course and outcomes, including higher mortality (about 30% of patients die within 30 days), more disability, and a higher risk of recurrent stroke [3, 5–8]. Identification of risk factors and the cause of stroke allows modification of some of these factors and treatment of the underlying conditions.

The aim of the study was to evaluate the prevalence of AF in patients hospitalized due to ischaemic stroke, compare the rates of concomitant conditions in patients with stroke and AF or sinus rhythm, and evaluate in-hospital outcomes in this patient group.

Our retrospective study included 2000 consecutive patients hospitalized due to ischaemic stroke in a tertiary care neurology centre in 2013–2014. The diagnosis of ischaemic stroke was based on clinical presentations and brain imaging studies (head computed tomography [CT] or magnetic resonance imaging [MRI]).

We analysed data on age, gender, and concomitant conditions such as hypertension, diabetes, lipid abnormali­ties, and previous thromboembolic event. We evaluate the extent of cerebral infarction based on CT or MRI imaging, and patency of carotid arteries using Doppler ultrasound. Resting electrocardiogram (ECG) was performed in all patients, and Holter monitoring and echocardiography in some patents. Neurological condition of the patients was evaluated using the National Institutes of Health Stroke Scale (NIHSS) on admission and discharge. 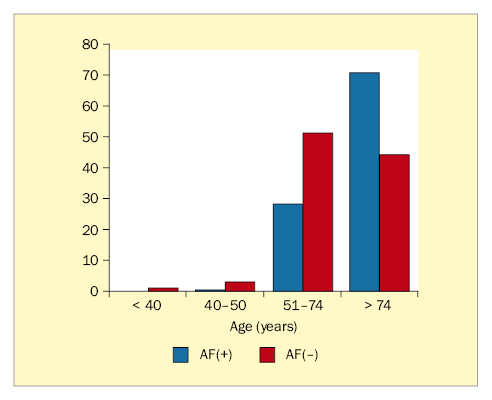 In our study group, the proportion of women was higher in those with AF compared to those in sinus rhythm (62% vs 44%). Similarly, in a Swedish registry (Riksstroke) that included 44,173 patients with ischaemic stroke, the proportion of women was higher among subjects with arrhythmia [13]. Female gender is associated with a 1.6-fold increase in the risk of stroke or thromboembolic event. AF is more common in men but the risk of stroke is higher in women [3, 4, 14].

The most common risk factor for stroke in both patients with AF and those without AF was hypertension, which is in agreement with the reports by other authors [11–13]. Hypertension is associated with 4- to 5-fold increase in the risk of stroke. The risk is further increased with concomitant presence of hypertension and AF. Studies indicated that blood pressure reduction by 12/5 mm Hg reduces the risk of stroke by as much as 30–34% [14–16]. Appropriate antihypertensive therapy plays a major role in primary and secondary prevention of stroke.

In an analysis that included 2,697 patients hospitalized due to ischaemic stroke, a history of stroke was found in 17% of patients. Multivariate analysis confirmed that in these patients, factors predisposing to recurrent ischaemic stroke include hypertension, AF, and presence of atherosclerotic lesions [17].

Most patients in our study underwent carotid ultrasound to detect atherosclerotic lesions. It showed a critical carotid artery stenosis (> 70%) in 232 patients (16.3%) in the AF(+) group and in 69 (11.9%) patients in the AF(–) group. In a study in 899 patients with AF and stroke, significant carotid artery atherosclerotic lesions were found to be associated with an increased risk of recurrent stroke and 30-day mortality [18].

Major neurological deficit on admission was found in similar proportions of patients in the AF(+) and AF(–) groups, while worsening of the neurological status was seen more frequently in patients with AF (39% vs 15.7%). Arrhythmia is associated with significantly worse outcomes in patients with stroke. Compared to patients without AF, those with AF are more often found to have early ischaemic changes in brain CT and haemorrhagic transformation in subsequent days, which results in a more severe clinical course of stroke and worse outcomes in these patients [11–13].