A 65-year-old woman with a previous history of hypertension and hypercholesterolemia was admitted to the emergency department due to 2-week asthenia, diarrhoea and dizziness. Electrocardiogram (ECG) at admission showed ST-segment elevation in leads I, avL and V2 and depression in the inferior leads, suggestive of high lateral ST-segment elevation myocardial infarction (STEMI). QTc was 447 ms (Fig. 1A). She did not complain of chest pain or dyspnoea. Serum troponin levels were normal, and echocardiogram showed moderate systolic dysfunction with akinesia of medium segments of all cardiac walls. Laboratory evaluation evidenced severe hypocalcemia (6.1 mg/dL, normal 8.5–10.9 mg/dL) with low ionized calcium, corrected by serum albumin (2.6 mg/dL, normal 4.40–5.30 mg/dL). After calcium replenishment, ECG abnormalities reverted to normal (Fig. 1B) and echocardiogram demonstrated improvement of cardiac contractility. Deferred coronary angiography excluded significant epicardial coronary artery disease (Fig. 1C), as well as absence of endothelial dysfunction evaluated in the left anterior descending artery territory by acetylcholine provocation test and normal coronary flow reserve with mild elevation of the index of microcirculatory resistance (Fig. 1D). The patient was discharged after 1 week of hospitalization. 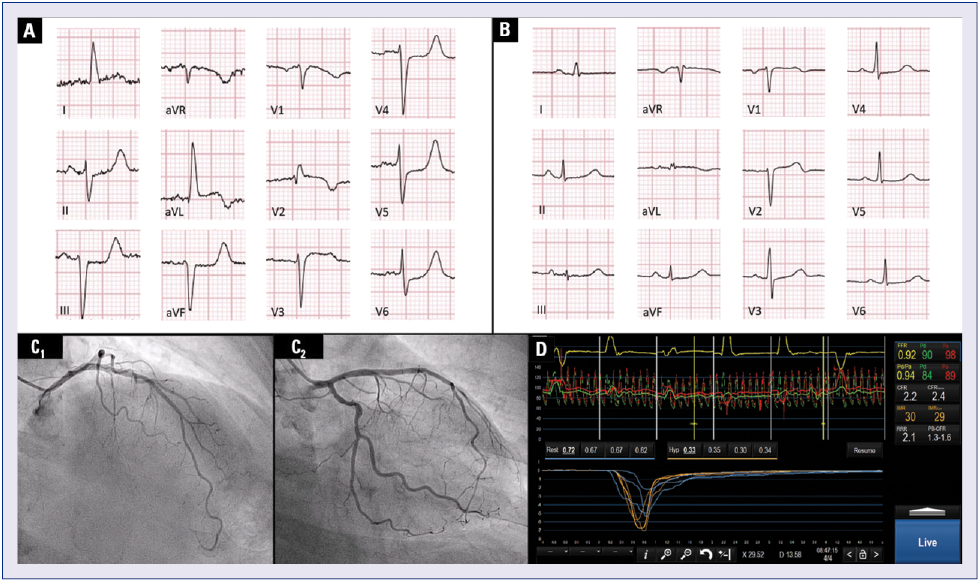 Electrolyte imbalances are a well-known cause of electrocardiographic abnormalities. In hypocalcemia, most frequent findings are ST segment and QTc prolongation, due to a reduction in phase two of the action potential. T wave may be flattened or inverted, but usually maintains its polarity. Although it has rarely been reported, hypocalcemia can induce ST segment elevation.

A literature review in Pubmed and Google Scholar databases regarding hypocalcemia as cause of STEMI was conducted. After evaluation by two independent investigators, 7 case reports were found.

Lehmann et al. [1] presented a case, in the year 2000, of a 24-year-old female presenting to the emergency department for loss of consciousness and seizures in the context of severe hypocalcemia due to hypoparathyroidism. ECG at admission showed ST segment elevation in I and aVL and depression in inferior and precordial leads, as well as QTc prolongation. Coronary angiography showed normal coronary arteries. After electrolyte supplementation, ECG changes reversed.

Similar cases have been reported subsequently and are described in Table 1, with no sex differences and a wide range of ages. In most of the cases (75%) ST-segment elevation is presented at lateral leads. Only Adeel et al. [2] described a case with ST elevation in inferior leads.

As it is known, the duration of the ST segment is inversely proportional to the plasmatic calcium concentration [3]. Consistent with that, corrected QT interval was prolonged in most of the patients, except for the one described by Kukla et al. [4], who presented with a shortened QT. Authors suggested the hypothesis of a coronary artery spasm as a possible cause. In the current patient, a vasoreactivity test was performed with increasing doses of acetylcholine, up to 100 µg, with no vasospastic response.

Very few cases have been reported in the literature hypothesizing a relationship between vasospasm and hypocalcemia [5, 6]. They presented patients with chest pain, ST segment changes and non-obstructive coronary arteries in the context of low calcium levels. Symptoms improved after calcium reposition so an assumption was made that hypocalcemia was related to a possible coronary spasm, however this was not proven with intracoronary physiology studies. Moreover, there is no clear physiopathological mechanism explaining this relationship.

After depolarization, calcium enters smooth muscle cells, triggering the opening of L-channels, promoting calcium interaction with calmodulin and subsequent activation of myosin. This mechanism explains why hypocalcemia can be related with vasodilation and hypotension, more than to vasospasm. It also explains the mechanism of action of calcium antagonists.

Left ventricular dysfunction was found in 4 of the cases. All of them had an angiography or perfusion imaging performed, showing the absence of coronary stenoses or myocardial perfusion defects.

Herein, is no certain explanation for the impairment of ventricular contractility, according to available research, calcium is a fundamental electrolyte participating in the generation of the action potential and cardiac muscle cell contraction. A severe reduction of its levels may have caused abnormalities in both electric and contractile activity, explaining those findings, as well as the absence of a correlation between regional wall motion abnormalities and ECG location of the ST elevation. Experimental studies suggest a correlation between depression of ventricular function and lower calcium concentrations [7]. The entry of calcium in the myocardial cells induces the release of calcium from the sarcoplasmic reticulum (“calcium-induced calcium release”), binds to troponin C and induces actin-myosin interaction. Hence, severe hypocalcemia could be a reversible cause of impaired myocardial contraction and heart failure. This has been described in literature as “hypocalcemic cardiomyopathy” [8]. Accordingly, transient left ventricular dysfunction has been described after blood transfusions with citrate, a calcium binding agent [9]. Other factors may play a physiopathological role, like duration of the electrolyte imbalance or preexisting cardiac conditions.

All patients followed during hospitalization or at discharge showed improvement of ejection fraction after treatment of hypocalcemia. One patient died because of his critical condition at admission.

In conclusion, hypocalcemia can cause a “pseudo-STEMI” pattern, most frequently in lateral leads. Physiopathological mechanism remains unknown but significant coronary disease seems not to be the cause. Although it may present with elevated troponin and regional wall motion abnormalities, electrocardiographic changes and ventricular function may recover after electrolyte correction.