Almost 1 billon people worldwide have been fully vaccinated. Recent publications report on several cases of presumably vaccine-induced myocarditis [1–3]. This article presents a series of patients with this condition.

Case 2. A 12-year-old male presented with severe stabbing chest pain, diarrhea and fever 2 days after receiving Comirnaty vaccine. Resting ECG revealed a pattern typical for cardiac muscle injury (ST elevation in leads I, II, V3–V6), alongside with increased inflammation parameters (peak CRP of 23 mg/L, peak troponin I of 5.1 ng/mL). On the 3rd day after vaccination LVEF of 58% and TAPSE of 18 mm were noted in echocardiography. On the 4th day, CMR was performed, revealing EF of 56% and subepicardial/intramural LGE in the basal infero-lateral and basal inferior wall. In extended viral diagnostics with polymerase chain reaction (PCR) and serology methods no infectious cause of myocarditis was found. No lymphocyte populations abnormalities were found. The patient required only analgesic treatment (paracetamol) during 1st day of hospitalization. Day 5 evaluation showed improved systolic function (LVEF 72%, TAPSE 25 mm).

Case 3. A 17-year-old male presented with severe stabbing chest pain and fever 1 day after receiving Comirnaty vaccine. Resting ECG revealed pattern typical for cardiac muscle injury (ST elevation in leads II, III, aVF), alongside with increased inflammation parameters (peak CRP of 18.2 mg/L, peak troponin I 8.9 ng/mL). In echocardiography on the 2nd day after vaccination LVEF of 63% and TAPSE of 26 mm were described. In the follow-up ECG evaluation T waves inversion in leads II, III, aVF, V6 was observed. On the 6th day CMR was performed, revealing EF of 60% and subepicardial features of edema/acute injury as well as LGE areas in the basal and mid-ventricular infero-lateral and inferior segments. In extended viral diagnostics with PCR and serology methods, no infectious agents were found. Lymphocyte populations were normal.

The current patients have several common characteristics. All three were young males and had no comorbidities. In all three, myocarditis developed shortly after the 2nd dose of mRNA vaccine against coronavirus disease 2019 (COVID-19), within 1 to 5 days. None of the patients had a history of previous COVID-19 disease. All of them presented with elevated troponin levels, peaking on the 3rd or 4th day after vaccination. Apart from the troponin, CK-MB mass, liver enzymes and CRP were elevated in all patients. No other laboratory abnormalities were found. On echocardiography the LVEF was within the normal range in all of these cases and no regional wall motion abnormalities were found. Interestingly, in all three subjects CMR revealed a similar pattern of myocardial injury found predominantly in the inferior and inferolateral segments (Fig. 1). This pattern included localized features of subepicardial edema in T2-weighted short tau inversion recovery (STIR) images, accompanied by elevated native T1 and T2 relaxation times in cardiac parametric mapping, with corresponding foci of LGE (i.e., areas of predominantly irreversible myocardial injury) in the respective regions. The clinical course was favorable in all three cases. They only transiently received analgesia (paracetamol). The hospital course ranged from 5 to 9 days (9, 5, 5, respectively). All had normalization of ECG and laboratory parameters, were asymptomatic and in good general condition on discharge. 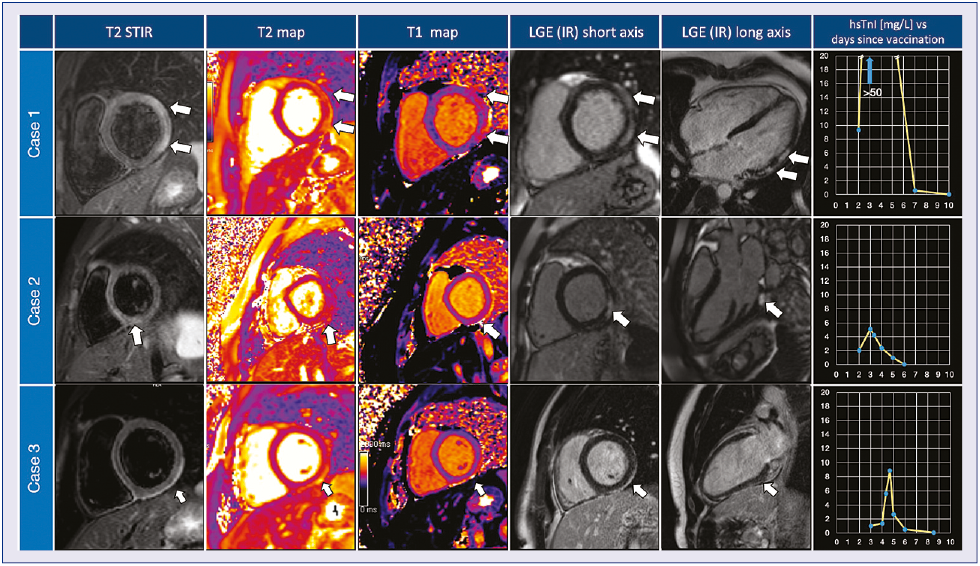 Noticeably, no similar cases were reported in the course of registration trials of any of the vaccines [4, 5]. This might be due to the low incidence of this adverse effect. So far, in the documented region, with over 450,000 fully vaccinated inhabitants, only 3 (0.0007%) cases of vaccine-induced myocarditis have been identified. Similarly, in Israel, the development of myocarditis within 30 days from the vaccination was reported in 121 subjects per over 5 million fully vaccinated citizens (0.002%). The present series includes only male patients, concordantly with the published reports also showing male predominance [2, 6].

The causal relation between myocarditis and COVID-19 vaccination has not been proven. However, the time concordance is quite indicative. Also, the mechanism responsible for triggering this adverse reaction has not been explained. The subjects with post-vaccine myocarditis do not present abnormally elevated anti-COVID-19 antibodies nor other laboratory markers that could differentiate them from patients suffering from viral myocarditis [2, 7, 8]. The current findings are consistent with previous reports.

The severe acute respiratory syndrome coronavirus 2 (SARS-CoV-2) can cause damage to the myocardium in two possible ways: primarily, by direct myocyte injury after binding to angiotensin-converting enzyme 2 (ACE-2) receptor [2], but also in the late phase of infection, in the process of cytokine storm [9]. Given that the post-vaccine myocarditis occurs predominantly after the second dose of mRNA specimen, which causes greater lymphocyte activation [10], it is more likely to be immune-mediated than related directly to the injected substance, however the precise pathway remains unknown. Contrary to a previous report [7] we found normal lymphocyte distributions in one and mildly elevated NK level in the second one (the first one was not assessed).

At present, unquestionable benefits of anti-COVID-19 vaccines outweigh the low risk of developing myocarditis that is mild and transient and should not be considered a reason to withhold vaccine administration. This has been clearly stated by the Advisory Committee on Immunization Practices [10]. Further research is necessary to investigate the pathomechanism of this adverse reaction, identify subjects at risk and implement adequate means of prevention.