Amiodarone is the most commonly used antiarrhythmic drug (AAD) for atrial fibrillation (AF) in the United States, accounting for 45% of AAD prescriptions each year [1]. Accumulating evidence has suggested that compared to other AADs, amiodarone is associated with increased mortality and rates of drug discontinuation due to its significant end-organ toxicities [2–5]. This is particularly important in AF patients without structural heart abnormalities in whom the use of other AADs or consideration of catheter ablation are preferred according to the 2006 and the recently published 2014 American Heart Association/American College of Cardiology/Heart Rhythm Society (AHA/ACC/HRS) AF guidelines, which classify amiodarone as a second-line therapy for AF in patients without structural heart disease after other AADs [6, 7]. Prescribing amiodarone as a first-line agent in this patient population is however not uncommon in “real world” clinical practice where its impact on long-term patient outcomes is unclear. We therefore sought to investigate how amiodarone impacts the long-term clinical outcomes of AF patients without structural heart disease, and whether the prescription patterns of amiodarone differ by the medical specialty of prescribing physicians.

The study is a cohort analysis comparing long-term outcomes of 2,077 consecutive paroxysmal or persistent AF patients without structural heart disease, who were prescribed amiodarone vs. other AADs at the hospitals and clinics of the University of Pittsburgh Medical Center (UPMC) from January 2006 to November 2013 with the goal of achieving rhythm control. The study was approved by the University of Pittsburgh Institutional Review Board.

Atrial fibrillation patients without structural heart disease who were prescribed Vaughan Williams class IC or class III AAD (flecainide, propafenone, sotalol, dronedarone, dofetilide or amiodarone) with treatment duration of at least 6 months were included in the study [8]. The initial query of the UPMC electronic medical record and pharmacologic database yielded 5,976 AF patients who were prescribed with Vaughan Williams class IC or class III AAD during the study period, among which 3,043 patients were excluded due to presence of structural heart disease including coronary artery disease (n = 2,139), congestive heart failure (n = 1,405), severe left ventricular hypertrophy (n = 82) or moderate to severe valvular heart disease (n = 642). Eleven patients were excluded for estimated glomerular filtration rate less than 30 mL/min at baseline, 81 patients were excluded for previous use of AADs, and 764 patients were excluded for treatment duration of less than 6 months, yielding a final cohort of 2,077 patients. There were no missing data on any of the 2,077 patients included in the analysis.

The patients were followed from the date of first AAD prescription through the date of discontinuation of first AAD with prospective review of outpatient and inpatient medical records. Patients who died or were lost to follow-up during this period were censored at their date of death or last encounter. Death was ascertained through review of the medical records and the social security death index. We assigned patients in our cohort to one of two groups: amiodarone (AMIO) group, in which amiodarone was prescribed as 1st AAD for rhythm control; and non-amiodarone (NON-AMIO) group, in which AADs other than amiodarone (dronedarone, dofetilide, flecainide, propafenone or sotalol) were prescribed as 1st AAD.

Demographic data was obtained from the clinical records. Information on comorbidities was generated from International Classification of Diseases, Ninth Revision, Clinical Modification (ICD-9-CM) codes in the clinical database with coding algorithms described by Quan et al. [9, 10]. The CHA2DS2-VASc score and Charlson comorbidity index were calculated for each patient for risk stratification [11, 12]. Information on AAD and other cardiac medications was obtained from the institutional pharmacologic database and clinical notes and orders in the electronic medical record. The primary medical specialty of AAD prescribers could be ascertained in 1,703 (82.0%) patients (primary care physician or family doctor [PCP] = 127 [7.5%], general cardiologist [GC] = 1,047 [61.5%], cardiac electrophysiologist [EP] = 529 [31.0%]).

The primary outcome measures were all-cause mortality. The secondary outcome measures included cardiac mortality, non-cardiac mortality, AF recurrence, stroke, admission for any cardiac condition, and admission for AF. Causes of death were classified into cardiac and non-cardiac, and were adjudicated by review of clinical notes, death summary, and death certificates. Dates of AF recurrence were ascertained from clinical notes documenting recurrence of AF by electrocardiogram, electrocardiographic monitors, or recurrence of AF symptoms. Causes of hospital admission were adjudicated by review of admission notes. 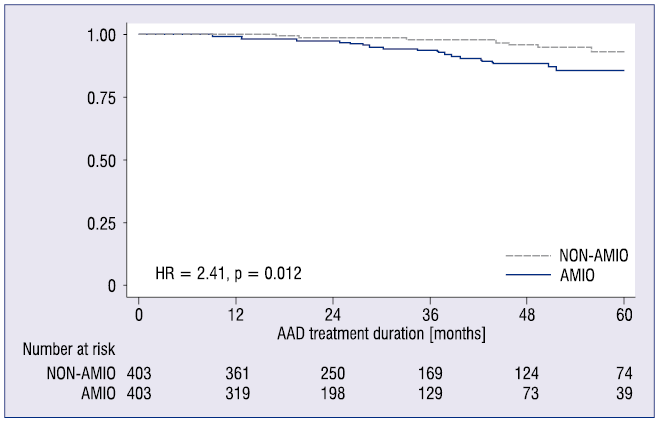 This cohort study suggests that compared with other Vaughan Williams class IC and class III AADs, amiodarone therapy in AF patients with structurally normal hearts is associated with a significant increase in all-cause mortality, driven primarily by higher rates of non-cardiac mortality. It also suggests that prescribing amiodarone as a first-line AAD in this patient population is more common among physicians with less specialization in arrhythmia management. These results have immediate implication for clinical practice.

Amiodarone, a complex iodinated compound, has been known for its clinical efficacy as well as its potential for serious end-organ toxicities due to tissue accumulation with long-term oral therapy, mainly in the lungs, liver, thyroid gland, nerves, skin, eyes, and heart [2–5, 13, 14]. When the Food and Drug Administration granted approval for amiodarone in 1985, it was intended for life-threatening ventricular arrhythmias and could only be prescribed by experienced physicians [14]. Over time, however, off-label use of amiodarone became more common due to its clinical efficacy and safer pro-arrhythmic profile compared with other AADs, especially among patients with chronic heart failure or previous myocardial infarction [3, 5, 15, 16]. Analyses of the AFFIRM study suggested that among AF patients with pre-existing pulmonary disease, the use of amiodarone does not increase pulmonary death or all-cause mortality [17] and that amiodarone is superior to other AAD in maintaining sinus rhythm [18]. Presently, amiodarone is the most commonly prescribed AAD for AF [5], and has gained popularity among physicians of different medical specialties.

Conversely, there has been increasing evidence suggesting that long-term amiodarone use may increase mortality and adverse events in AF patients. In the SCD-HeFT trial, amiodarone was associated with increased non-cardiac mortality in patients with New York Heart Association heart failure class III [2]. A mixed treatment comparison analysis based on data from existing randomized control trials showed that, compared to placebo, amiodarone was associated with increased all-cause mortality (HR 2.73, p = 0.049) and increased odds of study withdrawal and drug discontinuation due to adverse side effects [3]. In a systematic review with direct comparison to dronedarone, amiodarone was associated with 9.6 more deaths and 62 more adverse events per 1,000 treated patients, resulting in discontinuation of the drug, despite lower rates of AF recurrence [4].

Our study focused on AF patients without structural heart disease, in whom the use of amiodarone can usually be avoided since other treatment options with less severe long-term side effects and toxicities are available and recommended according to published guidelines. In our cohort, amiodarone was prescribed as a first-line AAD in nearly 20% of patients, contrary to recommendations of the 2006 and 2014 AHA/ACC/HRS AF guideline [6, 7]. In a propensity-matched cohort, all-cause mortality increased by 2.41 folds in the AMIO group, primarily due to a 3.55-fold increase in non-cardiac mortality. The cardiac mortality was similar between the two groups. The etiology of the increase of non-cardiac mortality in the AMIO group may be multifold. It is well known that amiodarone toxicity, especially pulmonary toxicity, could be fatal. However, none of the patients in our cohort had pulmonary toxicity documented as the cause of death, which is consistent with the previous literature [16–19]. It is therefore likely that amiodarone contributes to worsening overall medical condition for AF patients, leading to higher rates of acute decompensation. For instance, although baseline COPD prevalence was similar between the two groups in the propensity-matched cohort (9.7% AMIO vs. 11.5% NON-AMIO, p = 0.42), 5 patients in the AMIO group vs. no patients in the NON-AMIO group died of respiratory failure.

In our cohort, amiodarone was more often chosen as first-line AAD for AF by providers with less specialization in arrhythmia management. Considering the fast pace of advancement in electrophysiology, it is conceivable that primary care physicians and general cardiologists may be less up to date with the latest guidelines in AF management. Cardiac electrophysiologists, with more experience in rhythm control strategies, may also be more comfortable with prescribing other AADs with less toxicity. These considerations, which may help explain the discrepancies in use of amiodarone for AF by physician specialty deserve further investigation.

The results of our study suggest that amiodarone should be used with more caution in AF patients without structural heart disease and only after other therapies, including other AAD or ablation therapies have been tried and failed. It also suggests that strategies of rate control which have not been implicated in increased mortality rates have also to be considered when possible, particularly in asymptomatic or minimally symptomatic patients. Our results also highlight the importance of disseminating to physicians of different medical specialties knowledge regarding potential amiodarone toxicity and the availability of other rhythm control strategies. Whether more effective mechanisms for monitoring the potential side effects of amiodarone may alter patient outcomes is unclear at this point, but deserves consideration.

Our retrospective cohort study carries the inherent limitations of selection bias and information bias. To minimize the impact of selection bias, we excluded patients with structural heart disease and/or severe chronic kidney disease, so that each patient in either group would be eligible to take any of the AADs we studied. We then analyzed data with propensity-score matching methods and multivariate analysis to adjust for differences in baseline characteristics. Of note, propensity score matching can eliminate biases from observed imbalances between groups but cannot adjust for unobserved differences. In our cohort, difference in use of beta-blockers persisted between the groups despites propensity score matching. For information bias, the quality of event reporting and data collection is overall similar between the two study groups, as these data were collected simultaneously, using the same institutional electronic medical record system. For the evaluation of clinical outcomes, we focused on the mortality risk of long-term amiodarone therapy, which may not reflect the full impact of the nonfatal adverse effects associated with amiodarone. The external validity of the study may be limited by the fact that our patient population was from a single center. It is worth noting, however, that UPMC comprises a network of more than 25 hospitals as well as many outpatient clinics encompassing a large geographical area in Western Pennsylvania. With a cohort of 2,077 AF patients derived from these sites, this study has a wide representation of varying practice settings and patient demographics. Lastly, although we show in our analysis a 12% reduction in the rate of AF recurrence associated with the use of amiodarone, this trend did not reach statistical significance either because of lack of statistical power or because of unaccounted biases between the study groups.

Amiodarone use for AF is associated with increased mortality in patients with normal hearts, primarily due to increased non-cardiac deaths. It should therefore be avoided and only considered after other therapies fail. The use of amiodarone as a first-line AAD is more common among physicians who are less specialized in arrhythmia management, suggesting the need for better dissemination of the knowledge regarding published guideline recommendations on AF management.