Successful cardioversion of atrial fibrillation (AF) usually results in left atrial (LA) and LA appendage (LAA) stunning that may last up to a few weeks, observed after all methods of cardioversion (CV). It is responsible for the increased incidence of thrombus formation and embolic events after CV, despite restoration of sinus rhythm [1].

Both, mitral A-wave velocity and LA emptying fraction (among other parameters) are derived by conventional transthoracic echocardiography (TTE) to evaluate the contractile function of the LA. Tissue Doppler imaging (TDI) can provide other parameters of LA function such as A’ velocity at different segments of the atria and intra-atrial conduction time (IACT) [2].

Transesophageal echocardiography (TEE) remains a semi-invasive procedure, limiting its serial application as a screening tool. Therefore, it is desirable to obtain information regarding LAA function by TTE [3]. Evaluation of the LA wall using pulsed TDI is feasible and reproducible. TDI provides a useful method in the assessment of LA conduction times [4]. The mitral annular velocities, obtained by transthoracic TDI are useful predictors for LA dysfunction and thrombus formation [5].

Aim of the study is to point out timing of LA and LAA functional recovery after CV in recent onset AF.

Fifty consecutive patients with recent onset non-valvular AF who underwent successful CV to sinus rhythm were enrolled in the study to be followed up for 3 months, after exclusion of those with chronic AF, valvular heart disease, reversible causes of AF, patients with liver impairment and structural heart disease and those with LA and/or LAA thrombus in initial TEE.

Approval was obtained from the Ethics Committee of our Cardiology Department after approval of the Institutional Review Board.

After giving a written informed consent, all participants were subjected to the following:

Peak transmitral A wave velocity. The sample volume was positioned at the tips of the mitral valve leaflets, absence or peak A wave velocity less than 50 ms is taken as a cut off value denoting atrial stunning after CV [6].

Mitral annular velocities were measured from the apical 4-chamber view with the pulsed wave sample volume placed at septal (A1) and lateral (A2) mitral annular tissues.

IACT is the total duration of electrical activity of the LA in 1 cardiac cycle (the time between right atrial and LA activation). It was measured from the onset of P wave in ECG to the onset of A’ wave (PA) at both septal (IACT1) and lateral (IACT2) aspects of mitral annulus.

TEE was conducted using the same machine equipped with multi-plane transesophageal probe (5 mHz). Images were taken before CV for patients with recent AF more than 48 h and for all patients; immediately after, and then 1 month later. To visualize the LAA from the mid-esophageal position, the angle providing the longest apex to orifice length was used for pulsed Doppler analysis, typically between 45 and 90. A 4 mm sample volume was positioned 1 cm from the LAA orifice. Pulsed Doppler was used to measure the LAA flow and LAA late emptying (LAALE) velocities. In the TDI records, the first positive wave after the P wave (in ECG) was accepted as LAALE.

LA spontaneous echo contrast severity, graded on a scale of 0–4.

Electrical or pharmacological CV. The cases were selected for treatment designed to restore and maintain normal sinus rhythm according to the ACC/AHA/HRS guidelines [7].

Direct current cardioversion. Synchronized CV was performed during deep sedation with intravenous midazolam delivering a stepwise sequence of biphasic shocks as follows: first attempt at 100 Joules (J); if failed a second one at 150 J; if failed a third at 200 J; if failed a final of 200 J, with its failure considered an unsuccessful attempt. Patients who were cardioverted are maintained on amiodarone at a dose of 800 mg per day in divided dose until 10 g total, then 200 mg per day as maintenance.

Pharmacological CV: Patients with recent-onset AF without contraindications for the propafenone or amiodarone were treated either with:

All data were analyzed using SPSS 16 (SPSS, Inc. Chicago, IL, USA). Results were presented as mean value ± standard deviation for continuous variables and as frequency (%) for categorical variables. Means were compared using independent t-test. Categorical data were compared using χ2 test, for repeated measures one way (ANOVA) was performed to estimate within patient changes for detection of LA and LAA stunning and functional recovery in the follow-up. Pearson correlations between variables were made. Determination of cut off values with associated sensitivity and specificity was performed using the receiver operating characteristics analysis.

The serial changes in the different echocardiographic parameters as shown in Table 2, were as follows: the difference of serial 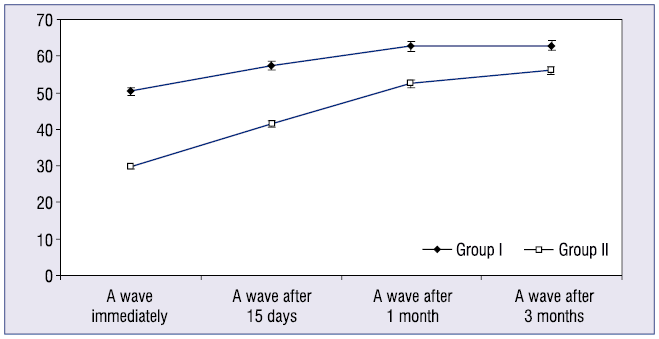 Figure 1. Serial changes of A wave after cardioversion of atrial fibrillation. 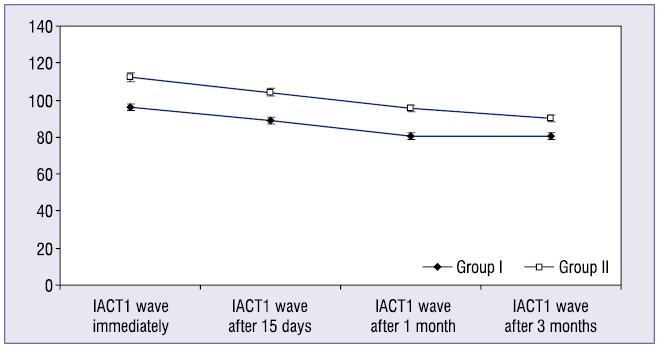 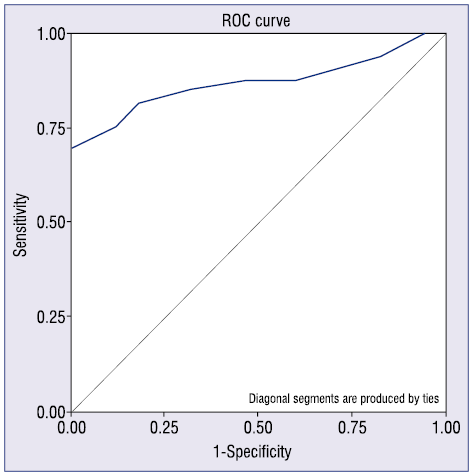 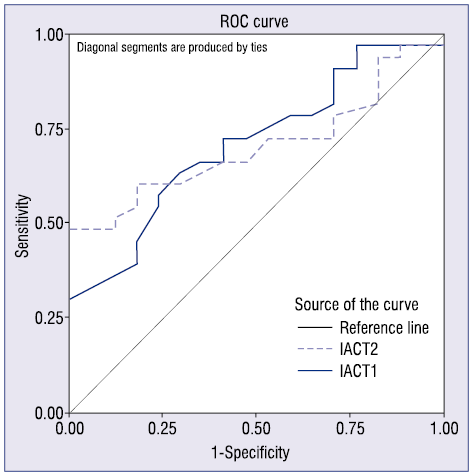 Mechanical dysfunction of the LA and/or LAA, called atrial stunning, develops after successful CV of AF or atrial flutter. Its prevalence varies from 38% to 80% in the previous studies [8]. In fact, atrial stunning is no more than a continuation of atrial remodeling that occurs during AF. It is characterized by progressive structural changes of the atria, especially with longer duration of arrhythmia [9]. Atrial stunning was defined as the presence of any of the following parameters: (1) Absence or peak velocity < 50 cm/s of mitral inflow A-wave, (2) Recently developed of SEC or thrombus, or increase in severity of the already existing SEC, (3) LAA emptying velocity < 20 cm/s, and (4) De­-crease of 20% in peak LAA emptying velocity after CV. After successful CV of AF, if the patient had at least one of above 4 parameters, they were described as having stunning [10].

Lack of effective atrial contractility can lead to hemodynamic changes, which may result in thrombus formation, with subsequent thromboembolic events [11].

Several investigators have evaluated the recovery of atrial function with restoration of sinus rhythm using invasive and non-invasive techniques, these studies confirmed the electromechanical dissociation of atrial recovery after successful CV [12] with a delay in the gradual improvement of the atrial mechanical function [13].

We investigated the serial echocardiographic parameters for detection of both stunning duration and timing of recovery of LA and LAA function post cardioversion of recent AF.

In our study, smoking and obesity were more prevalent among patients with longer duration of AF before CV, which may be due to earlier presentation of non obese and non smokers as the LA is smaller and so pulmonary congestion and dyspnea, as an alarming sign, was presented earlier, in agreement with Gami et al. [14].

Firstly, we decided to follow-up the parameters of LA function immediately post CV (average 1 day). We found that the transmitral A wave and pulmonary venous flow (Ar) velocities were lower in patients cardioverted after 48 h (with longer duration being in AF), representing more stunning and in this group of patients they showed delayed recovery to be completed after 3 months, but complete recovery in group I after 1 month. Manning et al. [5], Ciolli et al. [15] and Dogan et al. [8] agreed with us. Only 34% of our patients (in group I) showed complete recovery of mechanical function immediately after CV similar to these in published reports (ranging from 38% to 80%) [1]. Harjai et al. [16] found that: many studies stated that recovery of effective mechanical function occurs in over 50% of patients 1 day after CV. Hyon et al. [17] found that: transmitral A velocity was still low (34.9 ± 19.5 cm/s) immediately after sinus conversion. Wożakowska-Kapłon et al. [18] and Boyd et al. [19] found that the maximum improvement in atrial contraction occurred in the first month after restoration of sinus rhythm. Atrial reversal flow represents transient reversal of flow in the pulmonary vein resulting from organized atrial activity. The return of atrial contraction has been shown to be delayed with a progressive increase in the atrial contribution to ventricular filling documented over the 3 months following successful CV [20]. Khan [21] estimated that duration of preceding AF/atrial flutter, atrial size, and underlying heart disease are determinants of the extent of atrial stunning, we found that LA diameter in group I was higher than that of group II.

We found that the mitral annular A (A1) wave velocity and the LA free wall velocity by, TDI, were lower in patients being longer in AF, and gradually increased to be full after 3 months but higher in patients cardioverted within 48 h and went rapidly to recovery to be full after 1 month only. We used it as it can provide a more accurate assessment of atrial function by measuring intrinsic atrial longitudinal contraction [21]. Boyd et al. [19] supported our results that TDI could be useful for serial follow-up of LA recovery after AF CV.

Our study showed that IACT, representing the atrial electromechanical interval, in serial echo, was shorter in group I, regained and stabilized in this group after 1 month, but longer and showed delayed recovery in group II. IACT showed significant correlation with AF duration as the other parameters used to estimate stunning and recovery of LA and LAA did, and showed significant correlation with the LA diameter. IACT may be considered a useful follow-up parameter for mechanical recovery (electrical-mechanical coupling) detection in patients after CV although our patients were on propafenone or amiodarone (which are accused to prolong the IACT) this factor was equally present in both groups. As previous studies showed that, LA electromechanical time was significantly prolonged in patients with recurring AF [22]. Omi et al. [23] found that: in paroxysmal AF group, these intervals were significantly longer than in the control group. This parameter is affected in patients with paroxysmal AF and should be useful for detecting atrial impairment related to paroxysmal AF. Acar et al. [24] found that: increased inter-atrial electromechanical delay might be related with an increased risk for AF.

Agmon et al. [27] found that TEE is an invasive procedure; sequential TEE data assessing recovery of LAA function are limited. Significant improvement has been observed in LAA function within 7–30 days after CV, although the determinants of the time-course of LAA recovery are incompletely defined.

The present study was limited by the small sample size. We selected non valvular patients.

Clinical implications: These results may have important implications in guiding the appropriate duration of anticoagulant therapy after CV of recent AF, as we can stop oral anticoagulant if LA and LAA functional recovery become full within 1 month in these cases, with respect to the CHA2DS2-VASc score, that acknowledges the importance of age ≥ 75 years as having additional weight as a single risk factor for stroke (denoted by a score of 2 points) and indicates that age is not a yes–no phenomenon because risk of stroke increases with age, particularly from 65 years of age on [28, 29].

Recommendation: We recommend serial estimation of the LAA empting velocities both by Doppler and TDI modalities by TTE, before and after CV for longer time. Prospective studies should be conducted on a larger group of patients who should be categorized into groups according to the underlying heart disease. The medication history must be kept in mind as some drugs can affect the IACT.

To all patients and colleagues in the cardiology department who helped us complete this work.