Influence of beta-blockers on endothelial function: A meta-analysis of randomized controlled trials

Endothelium is the innermost layer of blood vessels responsible for regulation of blood flow, inflammation response and hemostasis. Endothelial dysfunction (ED) frequently precedes cardiovascular diseases (CVD) and is a well-established risk factor of major adverse cardiac events [1]. Nowadays, one can assess endothelial function using invasive or non-invasive procedures. One of the most popular methods of endothelial function assessment is still flow-mediated dilatation (FMD). In this method, the brachial artery diameter is measured before and after endothelial-dependent vasodilatation provoked by temporary ischemia.

Beta-blockers were introduced to the therapy in the 1960s. Their effectiveness in the therapy of hypertension, coronary heart disease and heart failure is well documented [2, 3]. Of the two types of beta-adrenergic receptors, one (beta1) is mainly found in the heart. The effects of beta1-receptor stimulation include change of chronotropy (increased heart rate), inotropy (increased force of heart contraction), lusitropy (increased myocardial relaxation) and dromotropy (increased conduction speed). Modulation of any of these attributes by beta-blockers can be a goal of a CVD therapy.

Three generations of beta-blockers are available: non-selective, selective and beta-blockers with additional vasodilation properties. Among the 3rd generation beta-blockers, are those with a nitric oxide-dependent vasodilatory activity, which can be crucial for endothelial function improvement [4].

The reversible character of ED is well known [5]. In this paper, we attempted to assess the effectiveness of beta-blockers in improving endothelial function. Additionally, a comparison between particular generations of beta-blockers and other popular groups of cardiovascular treatment agents was performed according to their effects on endothelial function based on published randomized controlled trials.

Two co-authors independently searched the PubMed Database and the Cochrane Central Register of Controlled Trials (CENTRAL) for randomized controlled trials published before March 2014. To find suitable studies we used the following search formula: [(endothelial function) OR (flow mediated dilation)] AND [(beta-blockers) OR (beta andrenolytics) OR acebutolol OR atenolol OR betaxolol OR bisoprolol OR carvedilol OR labetalol OR metoprolol OR nadolol OR nebivolol OR pindolol OR propranolol OR sotalol)]. After selection of full text articles, selected references in particular studies were also analyzed.

We included only studies/reports fulfilling simultaneously all of the following criteria: 1) randomized, 2) controlled with placebo or other active treatment agents, 3) parallel or cross-over trials with 4) double or single blinding or end-point blinding; 5) in at least one of the arms of the study, beta-blocker administration had to be newly started; 6) ultrasound FMD measures were performed at least twice: before and after treatment; 7) diagnosis of CVD and/or diabetes mellitus in the study group was essential for trial inclusion; 8) published in English between January 1992 and March 2014. Characteristics of the trials included in the present meta-analysis are shown in Table 1. The quality of the trials was assessed by the Effective Public Health Practice Project Quality Assessment Tool [6]. Quality of the majority of the studies was assessed as strong.

Titles, abstracts and full texts indicated by the search engines used were independently reviewed by two co-authors. After selection of full texts, consensus between these reviewers was necessary for study inclusion. In case of any discrepancies, decision of a third reviewer was binding. For each study, we collected the following information: first author, number of patients in each arm of the study, their age and sex distribution, diagnosed diseases, treatment agents with doses, time of follow-up and FMD values before and after treatment. In case of two or more FMD measurements during the treatment period, the last one was considered. To obtain missing data, e-mails to corresponding authors were sent. When no information about exact mean FMD values was provided, we performed an evaluation based on figures or graphs.

The meta-analysis was performed based on generic inverse variance according to each study. For each study, mean changes of FMD values and standard deviations were calculated. To calculate standard deviation within repeated measurements, we based on the difference between mean values of FMD and the p-value for a paired t-test. P-values were converted to t-values using SAS 9.2. software. When no exact p-values could be obtained, bounded values were assumed. For non-statistically significant differences between baseline and final FMD measurements, the correlation coefficient between the measurements was presumed to be 0.5. When an interquartile range was reported, we converted it to standard deviation based on Cochrane recommendations [7]. For studies with more than one arm with the same group of drugs, we combined groups and assumed a single pair-wise comparison. Heterogeneity (I2) between studies was assessed with χ2 test for heterogeneity [7]. For heterogeneity level > 50% random-effects model was used, otherwise, fixed-effects model was presumed. Statistical significance of pooled treatment effect was considered for p-values < 0.05. The general part of the meta-analysis was calculated using Review Manager 5.2 (The Cochrane Collaboration).

Based on the search formula, we found 1,741 studies in the PubMed Database and 91 studies in the Cochrane Database. Altogether, the two co-authors selected independently overall 27 full-text studies for further analysis. After a careful assessment of the trials, 11 were excluded from the meta-analysis: 5 without placebo or other-drug control group, 1 without randomization, 1 with open label design, 2 with combined pharmacotherapy, 1 with endothelial function assessed using Peripheral Arterial Tonometry and 1 with FMD values adjusted for brachial artery diameter. A total of 1,273 patients from 16 studies were finally included into the meta-analysis. Their mean ages in those groups ranged from 44.9 to 63.2 years. The follow-up duration varied from 1 to 12 months, with 13 of the 16 studies (81.3%) focused on patients with diagnosed hypertension. The flowchart in Figure 1 illustrates the consecutive steps of study selection. 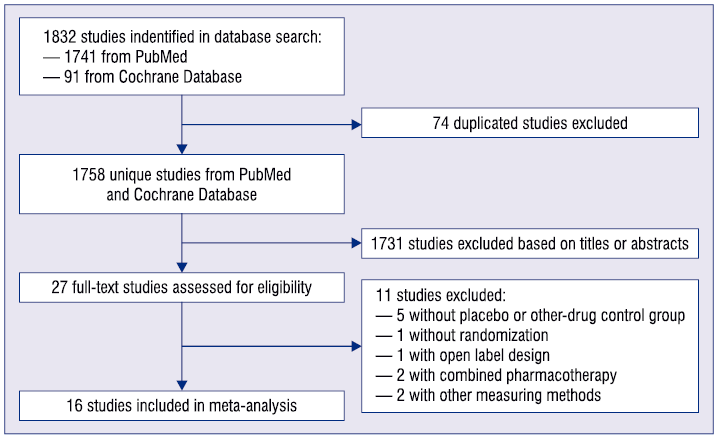 The duration of ischemia and cuff position during FMD measurement was reported in 15 of the 16 studies (except for Koh et al. [8]). In 14 out of 15 studies, the ischemia lasted for 5 min, in 1 study it was 4.5 min [9]. In 12 studies, the cuff was placed on the forearm and in 3 studies measurements was performed with cuff placed on the arm [10–12]. Six studies reported the number of observers who assessed FMD [9, 10, 13–16]. In 5 of those studies, only 1 person was responsible for the FMD measurements. The FMD values before and after treatment and their changes are gathered in Table 2.

Table 2. Flow mediated dilation values before and after treatment.

Four out of 16 studies compared the FMD change between the beta-blockers and placebo groups comprising a total of 360 patients [8, 9, 13, 17]. Period between baseline and final FMD measurements ranged from 1 to 12 months. The 2 subgroups of patients analyzed by Lin et al. [9]: the one with coronary artery disease and hypertension and the other with hypertension alone, were combined into one group.

The main conclusion for this analysis is that there was a statistically significant effect of beta-blockers treatment on the endothelial function compared to placebo, with mean difference (MD) of 0.83; 95% confidence interval (CI) 0.11–1.55; p = 0.02. The heterogeneity of those studies was assessed as non important, I2 = 40%; p = 0.17. A forest plot illustrating the comparison between beta-blockers and placebo is presented in Figure 2A. 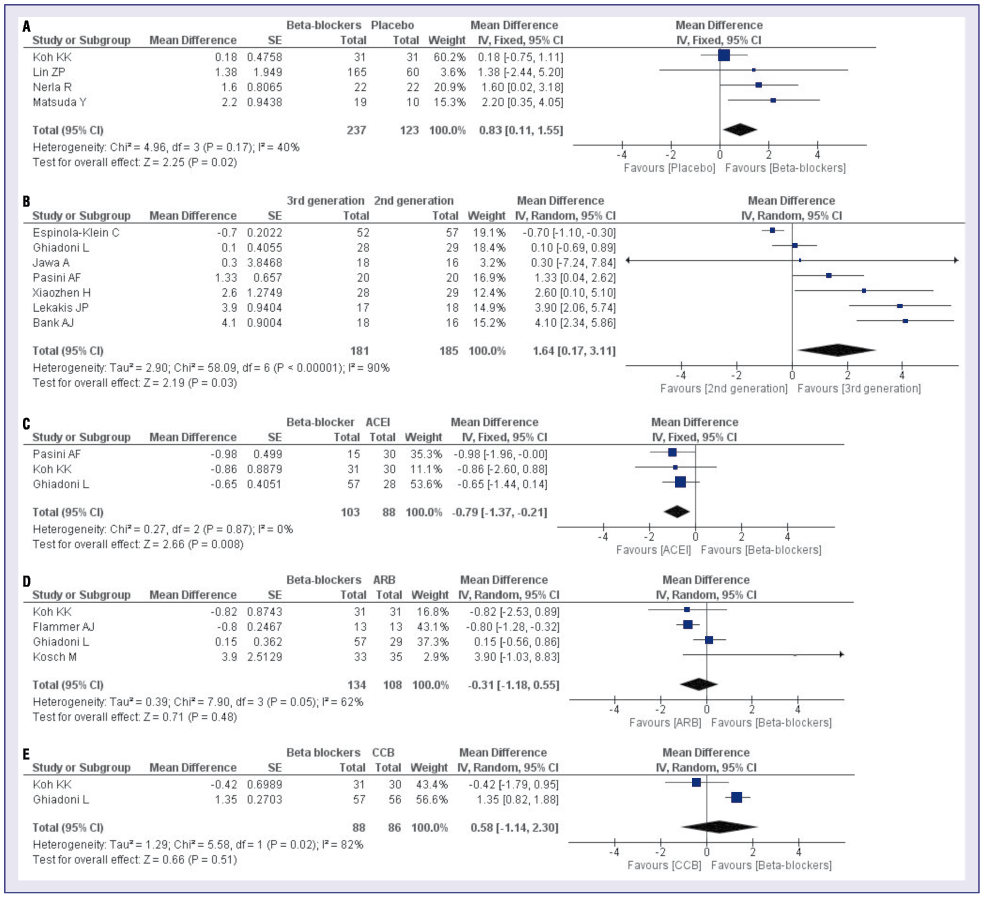 Third vs. second generation of beta-blockers

Beta-blockers vs. other antihypertensive drugs

Nerla et al. [13] compared the effect of atenolol and ivabradine on endothelial function in 41 patients with diabetes mellitus type 2. After 4 weeks of treatment, the change in the FMD value was significantly higher in the atenolol group than in the ivabradine group: 1.6 ± 3.61 vs. –0.3 ± 1.66; p = 0.02.

The effects of beta-blockers on endothelial function seem to be indirect. There is no strong evidence of an interaction between beta-blockers or their metabolites with endothelial cells. Earlier studies have amply described an impaired endothelial-dependent response of arteries in hypertensive subjects [24]. The pathomechanism of endothelial dysfunction as a response to high blood pressure is intricate. First, higher blood pressure favors reduction of nitric oxide (NO) level, which is predominantly responsible for decreased endothelium-dependent vasodilatation. Persistently decreased shear stress leads to reduction of endothelial nitric oxide synthase (eNOS) level in hypertensive patients [25]. Moreover, hypertension predisposes to higher serum levels of eNOS inhibitors (e.g. asymmetric dimethylarginine) and therefore, additionally results in decreased local NO levels. Second, an increased oxidative stress, due to higher blood pressure is a factor strongly impairing endothelial function [25, 26]. Finally, the damage of endothelial cells caused by high blood pressure is tightly connected with an increased local inflammatory response resulting in remodeling of vessel walls leading to their impaired relaxation [25].

Among the four studies comparing beta-blockers with placebo included in our meta-analysis, only Matsuda et al. [17] studied the effect of 3rd generation beta-blocker (carvedilol). In that study, the improvement of FMD values was the strongest. Carvedilol is a non-selective agent blocking not only beta-adrenergic but also alpha1-adrenergic receptors. Alfa-adrenergic blocking plays a substantial beneficial role in endothelial function improvement [27]. Moreover, the exceptional antioxidant properties of carvedilol may additionally enhance the favorable effect of alpha1-adrenergic receptors blockade on endothelial function [28].

Interestingly, in 2 of the 4 placebo-controlled studies analyzed here, the FMD values remarkably increased also in the placebo groups [8, 9]. This situation suggests influence of other factors (e.g., better medical care) on endothelial function despite a lack of hypertension treatment and implies that trials with no-treatment group give unrealistically positive outcomes.

An advantage of 3rd generation beta-blockers compared with 2nd generation ones has been shown in this meta-analysis. The beneficial effects of carvedilol on endothelial function improvement are discussed above.

Similarly to beta-blockers, the effect of other antihypertensive drugs on endothelial function seems to be strictly connected with blood pressure reduction. Additionally, the antioxidative properties of ACEI, ARB and CCB are well proven [29–31]. Earlier studies have suggested that the contribution of these agents to oxidative stress reduction is one of the main mechanisms of endothelial function improvement. Some investigators have suggested an important role of antihypertensive drugs in the reduction of inflammation response. However, Koh et al. [8] showed that none of those agents could reduce the C-reactive protein level reduction after 8 weeks of treatment. Noticeably, Nishizaka et al. [32] showed that endothelial function measured with FMD is negatively correlated with serum aldosterone level. The complex effects of ACEI on the renin–angiotensin–aldosterone system can explain the advantage of ACEI over beta-blockers in endothelial function improvement [33].

One of the main limitations of the present meta-analysis is indiscriminate inclusion of studies using both 2nd and 3rd generation beta-blockers. Selection of a single generation of beta-blockers could provide more homogenous subgroups, however, differences within these subgroups can also be significant. Moreover, to increase the number of participants we decided not to limit the analysis to patients with a diagnosed hypertension, in whom the effect of beta-blockers on endothelial function is well studied. The differences between treatment periods in individual studies additionally increased the heterogeneity of data. The strict inclusion criteria according to study the design reduced the number of analyzed trials, but on the other hand contributed to bias reduction. Finally, the lack of exact p-values for FMD changes in some studies increased standard error for the differences and reduced the effect of those studies on the meta-analysis results.